Many procedures must follow for sale contract to go through 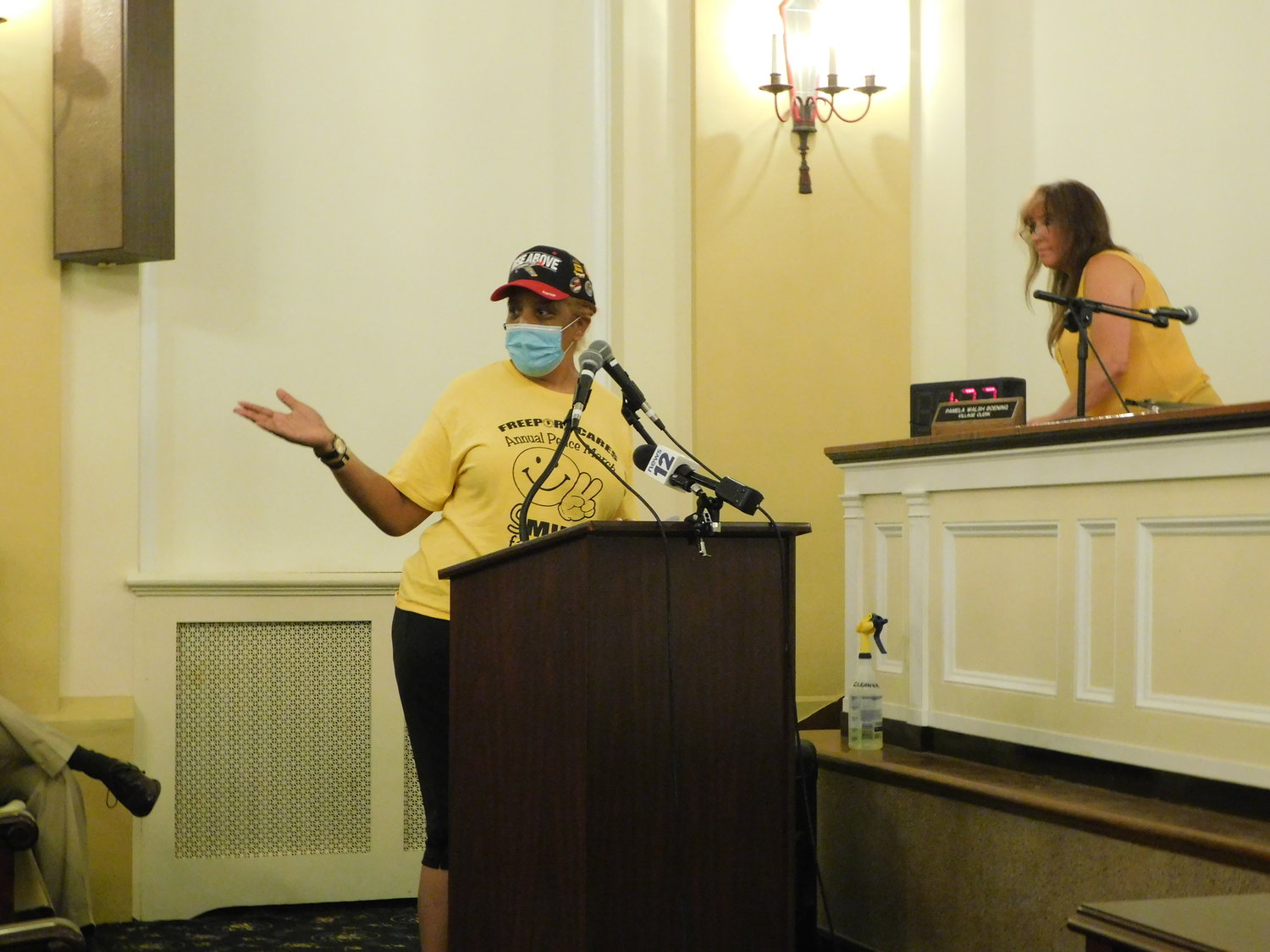 At a public hearing following the Freeport village board meeting July 25, Meta Meraday asked the trustees how they could sell a field that is still under litigation.
Reine Bethany/Herald 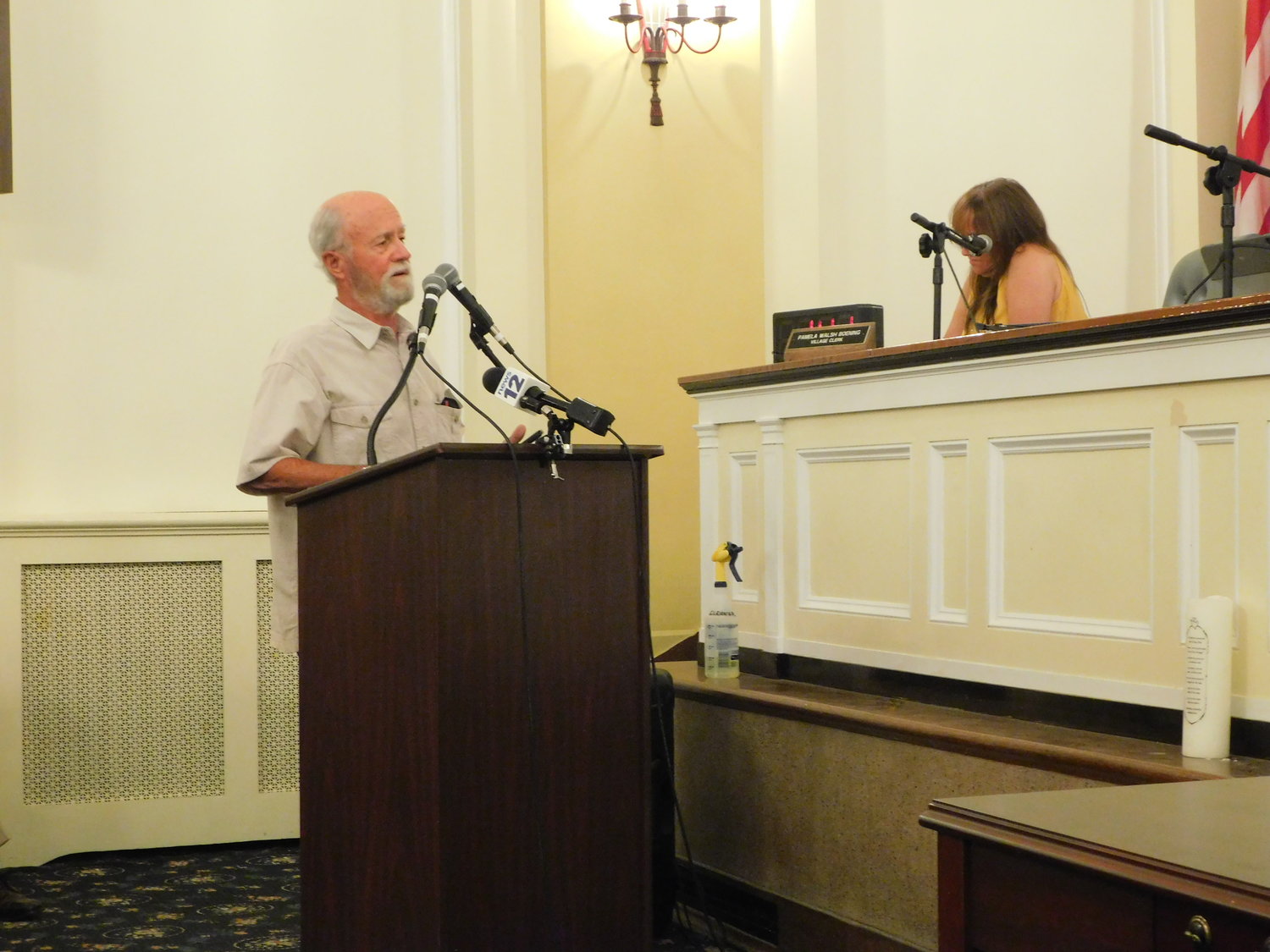 Bill Watson told the village trustees that the central location of the Cleveland Avenue field made it much more accessible to those who customarily use it than Cow Meadow Park.
Reine Bethany/Watson
Previous Next
Freeport village government's claims of benefits to selling Cleveland Park

Mayor Robert Kennedy, Deputy Mayor Ron Ellerbe, Trustees Evette Sanchez, Jorge Martinez, and Chris Squeri, and Village Counsel and Deputy Counsel Howard Colton and Rob McLaughlin have continued to assert that the proposed industrial complex will bring 320 jobs to the village. The types of potential jobs have not been defined. The village government also plans to apply $10 million of the sale money to village taxes, which would reduce the village portion of villagers' overall property tax by 20% for four years. The remaining $39 million will be placed into Freeport's village reserves.

Cleveland Park moved closer to becoming an industrial complex after the Freeport village board approved the sale and rezoning of the popular recreational property.

The approval of the sale of the nine-acre park for $49 million featured the board declaring the field and two adjacent parcels to be village surplus.

During a public hearing immediately following the July 25 regular meeting, Mayor Robert Kennedy and the trustees voted to rezone Cleveland Park from residential to industrial.

The rezoning is step along the path to allowing a developer to demolish the two parcels, tear up Cleveland Field, and build a last-mile distribution warehouse or a similarly space-consuming enterprise.

THE VOTE TO APPROVE A CONTRACT OF SALE

Ten people spoke in opposition to the sale and declaration of surplus during the regular board meeting. Most were village residents who repeatedly told the village board that the Cleveland Avenue field is not surplus property, but necessary to their quality of life.

Nonetheless, the trustees voted to affirm a contract of sale of the property to PDC Northeast LPIV, LLC, a 20-month-old firm from Delaware.

PDC Northeast was created by the Panattoni Development Co., and is not related to Amazon.

The village government started discussions with Amazon in 2021, but negotiations with the e-commerce giant were broken off last February.

In response to questions from village resident Dewey Smalls, village counsel Howard Colton explained that Amazon, Panattoni, and other developers approached the village with offers after the village advertised the land on a real estate site called Costar in late 2020.

The Freeport school district, which was granted a parkland easement to use Cleveland Park as an athletic field in 1949, has been fighting for its rights to the land via litigation since September 2021. The case is ongoing.

School board trustee Ron Ellerbe, who is also the village’s deputy mayor, has claimed recusal to avoid the appearance of a conflict of interest between his roles with the school district and the village.

“I recuse myself,” Ellerbe said when the votes to sell and rezone the field were called, though he did not leave the room during the discussion of the field or the voting process.

Meta Meraday, a Baldwin resident with long-held family and community ties to Freeport, asked how the village could legally proceed with the sale when Gov. Kathy Hochul has not signed the bill to remove the parkland easement from the property, and the litigation between the school board and the village is not settled.

“You have a company (PDC Northeast) not even out of diapers yet,” Meraday said, “that has the connections to bring to the table $49 million for that aforementioned ‘surplus’ — how does all of this connect if the community is saying to you, put some brakes on it, and you’re also in the midst of litigation and a lawsuit?”

While Colton and the village trustees slogged through the legal proceedings for selling the field and rezoning, the villagers continually pointed out why renovated athletic and community facilities at Cow Meadow Park would not be a fair substitute for the loss of Cleveland field.

“Back in my day, it was very convenient to get to the central location which had become Bill Ashley’s Field,” said Bill Watson, who grew up in Freeport. “I think that stretching the kids, going further from the central part of the district, presents problems concerning buses or bikes, which is primarily how some of us got around.”

Cleveland Park is at the east end of the village, along its midline. Cow Meadow Park is just over a mile south of Cleveland Park, across heavily trafficked roads.

Freeport resident Lavette Hooks told the board, “The decisions concerning the litigation, rezoning application, and state legislation have been handled … without community consent, input or involvement.” She presented a petition to save the field that held 1,120 signatures.

At the advice of village special counsel Christopher Browne, language was added to the rezoning resolution to affirm that the school district and residents could continue to use Cleveland Park until PDC Northeast LPIV, LLC took over the property.

During the rezoning vote, people tittered when Ellerbe once again said, “I recuse myself.”

The approval of the sale contract and the rezoning do not imply that the field will be destroyed immediately or even soon.

Many conditions must be fulfilled before the sale contract can go into effect, including hearings before the zoning and planning boards, fulfillment of environmental studies, and clearing of all litigation involving the field.

The village has 13 months in which to meet all the conditions, or the contract will not go forward.