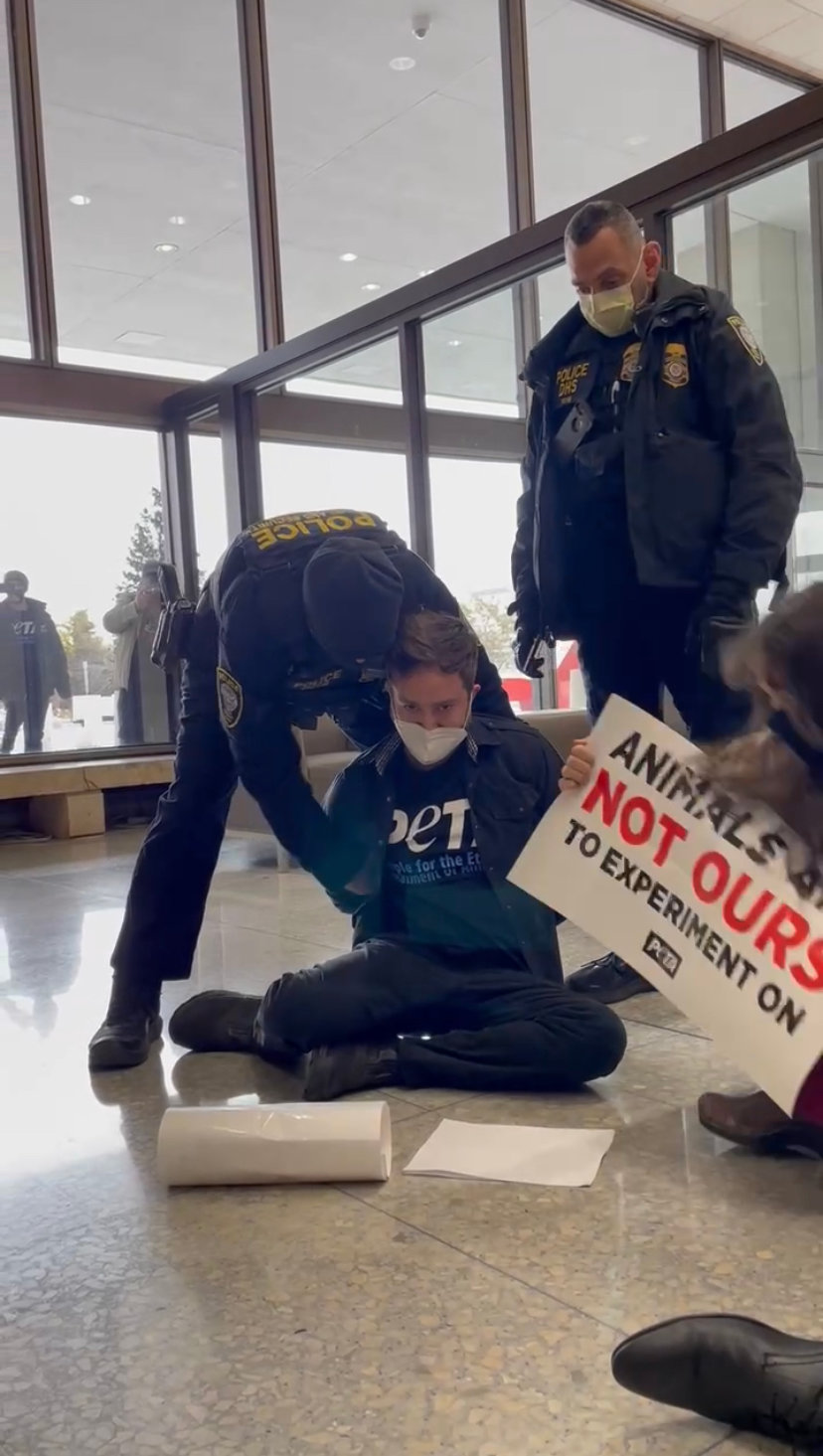 John DiLeonardo, who grew up in Malverne, is the president of Long Island Orchestrating for Nature, or LION, an animal advocacy group.
Courtesy PETA 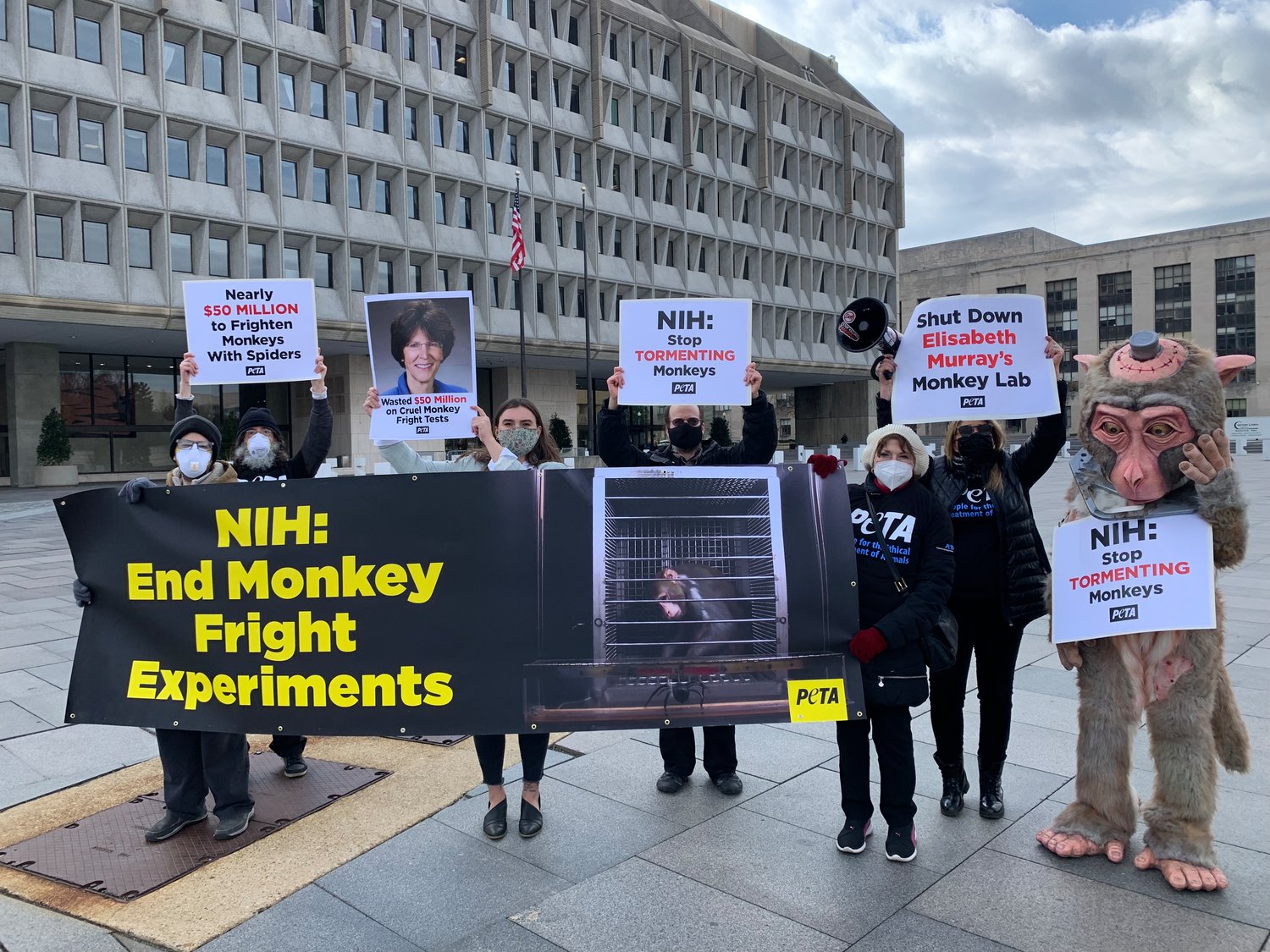 Seven animal rights activists were arrested after entering the U.S. Department of Health and Human Services building on Jan. 25 to protest experiments on monkeys.
Courtesy PETA
Previous Next
By Robert Traverso

Seven animal rights activists, including John DiLeonardo, formerly of Malverne, were arrested on Jan. 25 after entering the U.S. Department of Health and Human Services building in Washington, D.C., protesting taxpayer-funded experiments on monkeys.

DiLeonardo and the other six activists who were arrested are affiliated with the nonprofit animal rights organization PETA, People for the Ethical Treatment of Animals, which released a statement that detailed Murray’s alleged experiments.

“In her experiments, Murray cuts into monkeys’ heads, injects toxins into their brains, implants ‘head posts’ into their skulls, deprives them of food and water, and terrorizes them with fake but realistic-looking snakes and spiders,” the statement read.

DiLeonardo said the animal rights advocates entered the government building with signs decrying the experiments and began chanting, “There’s no excuse for animal abuse,” before police officers arrived and arrested each member of the group.

According to PETA’s statement, monkeys in Murray’s laboratory in Bethesda, Md. can spend years alone in cages. The monkeys are “condemned to social isolation that causes profound psychological and physiological distress,” the statement reads. “When experimenters frighten the isolated and brain-damaged monkeys with fake jumping spiders and wooden mechanical snakes, the monkeys respond by freezing, turning away, shaking their cages or showing signs of submission.”

On its website, the National Institute of Mental Health, where Murray conducts experiments, states, “Dr. Murray’s laboratory studies the neural basis of learning, memory, emotion and response selection, with two main areas of focus.  The first of these two research programs involves the independent mnemonic contributions of the different medial temporal lobes structures, the extent to which different medial temporal lobe structures must interact in storing information and their interaction with the prefrontal cortex,” the front section of the brain responsible for reasoning.

“A second focus of the Murray laboratory is the neural bases of decision making,” the site continues. “This work examines the neural circuits critical for affective processing and the way in which affective information, including reward, guides response selection.”

The institute concludes, “Dr. Murray’s laboratory has pioneered the use of MRI-guided stereotaxic [brain] surgery, a method that has for the first time allowed examination of the selective mnemonic contributions of various medial temporal lobe structures.”

DiLeonardo, who is the president of Long Island Orchestrating for Nature, or LION, an animal advocacy group, said animal rights activists are opposed to Murray receiving further taxpayer funding for her experiments on monkeys. According to PETA, Murray has received nearly $50 million from taxpayers since 1998.

“I believe Murrays experiments to be cruel,” said Elliot Speiser, a lifelong resident of West Hempstead and 2022 Volunteer of the Year at the Long Island Orchestrating for Nature (LION), an animal advocacy organization led by DiLeonardo.

“Like humans, monkeys can form long lasting relationships, feel pain and express emotions. Murray confined monkeys to cramped cages and forced them to be a part of her lab projects. We as humans should strive to do better and treat all life fairly and equally,” Sepeiser, who received the distinction after recently recovering the body of a dead domestic duckling found next to a trash bin at Halls Pond Park in West Hempstead. “John Di Leonardo is a brave animal activist who isn't afraid to give a voice to those who don't have one, and that's what I call a hero,” Speiser added.

“Elisabeth Murray’s monkey-torture laboratory has sucked up millions of government dollars, and all that taxpayers have gotten for it is a pile of dead animals,” said PETA Senior Vice President Kathy Guillermo.

DiLeonardo added, “If the public knew how their money was being spent on this, they would be outraged.” Further taxpayer funding for Murray’s experiments will be considered this month, he said, calling her research “outdated and cruel.”

DiLeonardo and the other six activists were charged with unlawful entry, a misdemeanor, and are scheduled to appear in court later this year.

DiLeonardo said he plans to keep working to ensure Murray’s experiments no longer receive funding. “We’re going to continue standing up for these animals … this is cruel and unnecessary,” he said.