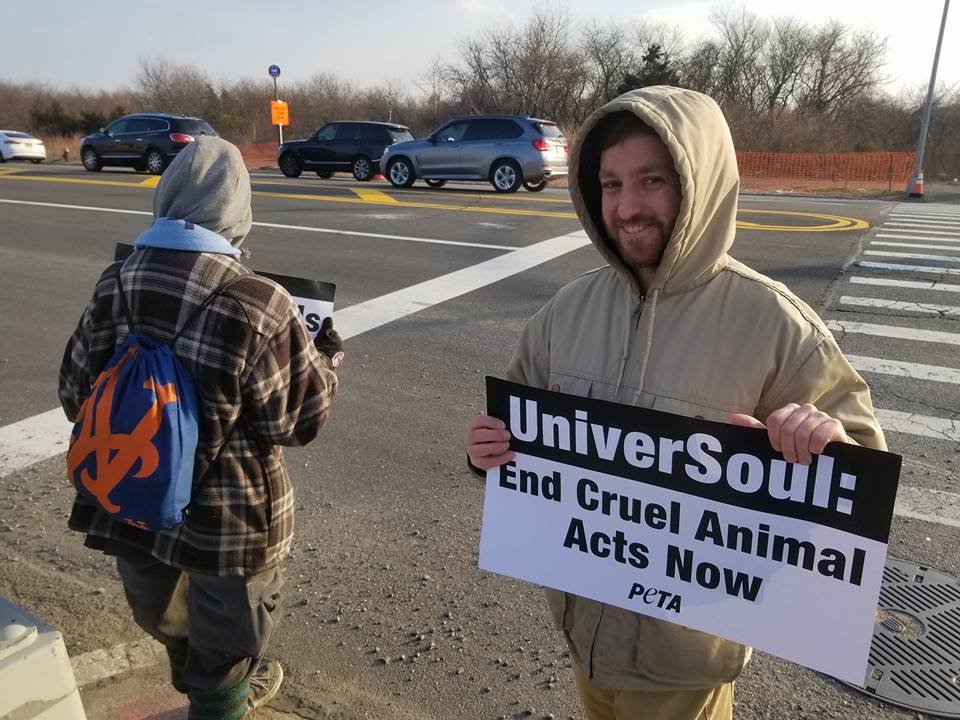 I wanted to help the group that needed the most help”
John DiLeonardo, President, Long Island Orchestrating for Nature
By Robert Traverso

When protests led by John DiLeonardo shut down Long Island performances by the Cole Bros. Circus 10 years ago, the Malverne native thought his animal rights activism had reached its peak.

But it was just beginning.

DiLeonardo, 34, the founder of Long Island Orchestrating for Nature, or LION, was a lifelong Malvernite before moving to Riverhead last July.

LION, he said, remains closely associated with his hometown, where it was founded. “We’re still very well connected to Malverne,” DiLeonardo said. “That’s where we set our roots.”

DiLeonardo’s early years in school, he said, motivated his first professional goal: to become a school counselor or psychologist. This goal was driven by a sense that he and friends were neglected by the school system.

“I wanted to help kids in their youth get on the right track,” DiLeonardo said, “or get off the wrong track.”

He earned a degree in education from Sienna College in 2010. At that point, he recalled, he believed his calling was to serve others through education. But that was just one interpretation of a larger mission.

“I always wanted to make this world a better place and have the biggest impact that I could have on the world,” DiLeonardo said. “Namely, I wanted to help the group that needed the most help.”

Catherine Grefig, who now lives in New Jersey, was DiLeonardo’s neighbor for 30 years in Malverne. She said she wasn’t shocked by his devotion to animals today. “Growing up with him and looking at him now, you can see he was destined to do this work,” Grefig said.

“He was always looking out after people, people who were younger or scrawnier … he was always a protector,” she said. “It was a no-brainer for him to go into this work.”

His goals changed, DiLeonardo said when a world religions class at Sienna changed his life. There he learned about Jainism, whose followers are vegetarian. He described learning about Jain monks waiting for nuts and berries to fall off trees, determined to not harm the plant in any way.

“I was so inspired by this, and taken aback,” DiLeonardo recalled. “You guys are waiting for berries to fall off trees, and I can’t stop eating chicken. What’s wrong with me?”

That inspired him to learn about how animals are raised for dairy and meat production. What he learned led him to become vegetarian in 2007 and vegan a year later. He encouraged others to do so as well. “We all grew up eating animals, we all grew up going to the circus,” he said, “but when we know better, we should do better.”

Then, in August 2012, when, DiLeonardo said, he remained unsure whether he viewed himself as an animal rights activist, he found himself protesting the Cole Bros. Circus in Oceanside with his friends. The result? The circus lost tens of thousands of dollars in ticket sales because of the protests, in which the protesters told prospective attendees about violations of animal welfare laws by the circus, and showed them video footage of one of its animal trainer abusing and degrading elephants.

“They decided to spend their money elsewhere,” DiLeonardo said of the circus-goers, “and it was very empowering.”

After that, he said, he and his Malverne friends started a Facebook page for LION and filed for nonprofit status in November 2012.

LION’s first major event once formed was protesting the fur industry on Black Friday, which is marked by the animal rights movement each year as Fur Free Friday. Since then, DiLeonardo and the group have never looked back.

While he began working with people with special needs after college, he realized that he would become an animal rights activist. “I knew that my life calling was now the animals,” he said.

He began taking coursework at the Humane Society Academy, based in Maryland today, where he met a professor who was launching the first accredited anthrozoology program in the U.S. DiLeonardo applied, and eventually received a master’s degree in anthrozoology, which is also known as human-nonhuman-animal studies.

He was recruited to speak at an animal welfare conference in 2014 in California, after a conference representative heard about LION’s local victories, such as stopping the killing of 600 geese in northern Hempstead. He spoke about being an activist while working full time, because he was still working for Innovative Resources for Independence, an organization that serves people with intellectual and developmental disabilities.

After the conference, there were job offers, and DiLeonardo began to believe for the first time that he could make a living fighting for animal rights. He soon earned applied for and was hired by People for the Ethical Treatment of Animals, where his transition to full-time animal rights activist began in 2015.

He stopped working for PETA last July to focus full-time on LION, and DiLeonardo now focuses on rescuing ducks and other animals across Long Island and spreading a message promoting animal rights.

On Jan. 25, he and other activists were arrested at the U.S. Department of Health and Human Services building in Washington, where they were protesting taxpayer-funded experiments on monkeys. But that did not discourage him.

“I’m glad to be arrested for protesting … because I know that we’re on the right side of history,” DiLeonardo said. “I hope it’s not long before the people harming these animals are the ones being arrested, not the ones shining a light on it.”