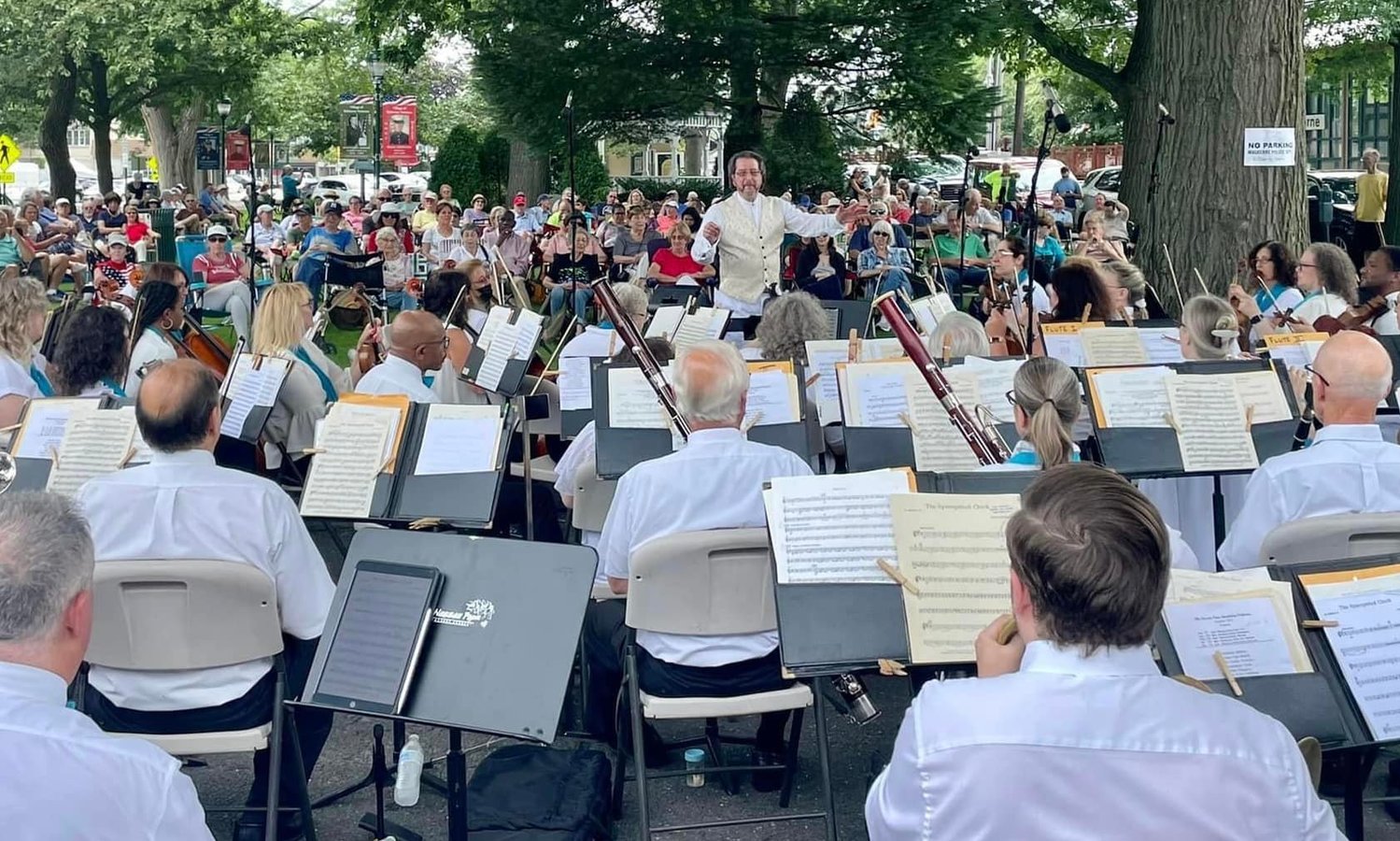 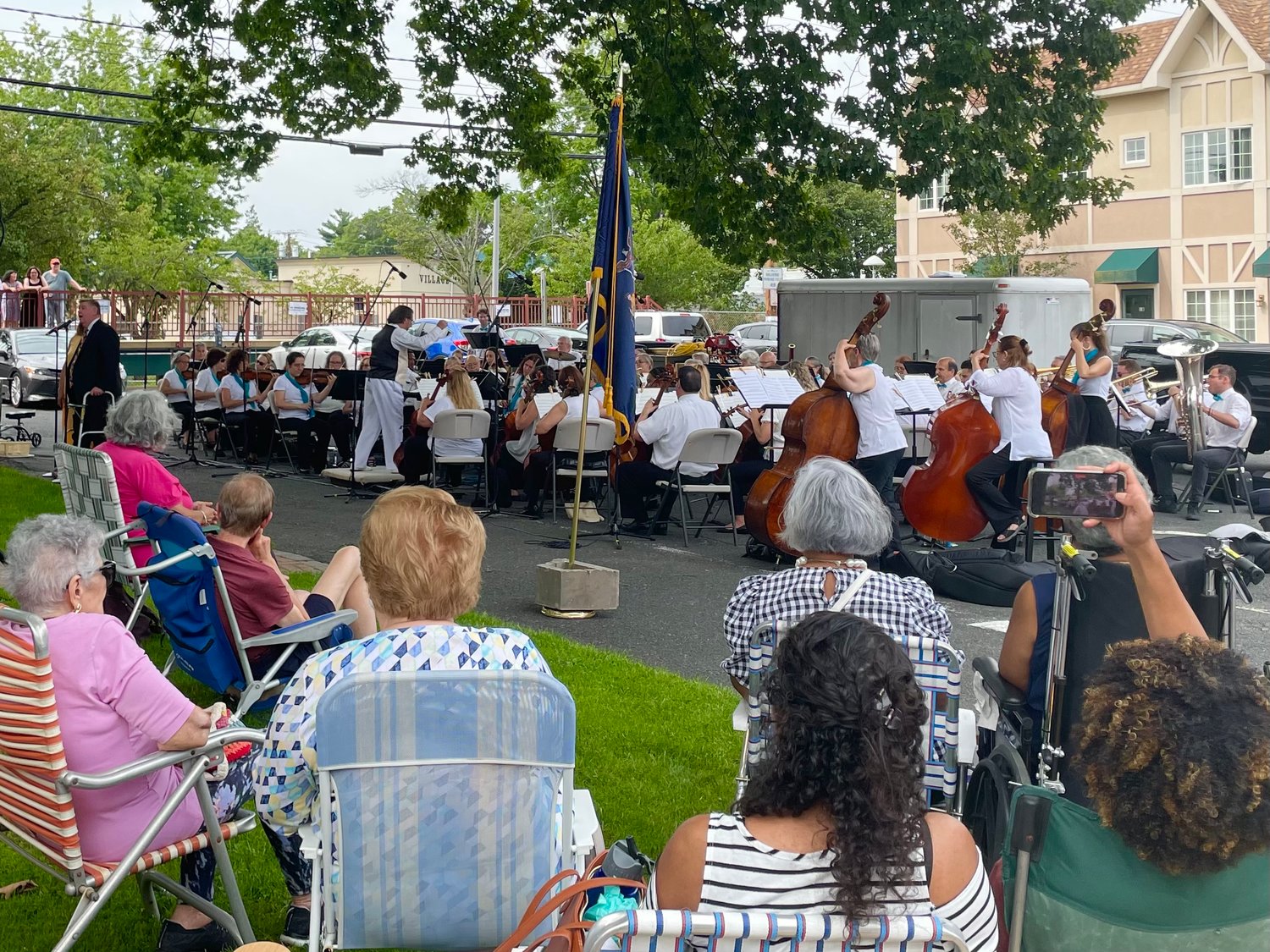 The orchestra performance was the last in the Pops’ summer programs, but the first in Malverne’s summer concert series.
Kyle Chin/Herald Photos
Previous Next
By Kyle Chin

The Nassau Pops Symphony Orchestra kicked off Malverne’s summer concert series with selections from film and theater at the town’s gazebo park on July 16. The performance was organized by the village and co-sponsored by the Chamber of Commerce, and featured the first of several groups set to take the stage throughout the remainder of the summer.

Each year the village’s summer concert series begins in June. The organizers gauge audience reactions from years past to determine the types of performances residents will be interested in, while hoping to attract visitors from out of town as well, to patronize local businesses. The chamber put up a quarter of the cost of the Pops show.

Malverne’s deputy mayor, Perry Cuocci, was the primary force behind the Pops’ appearance. “I spearheaded it,” Cuocci said. “My wife and my sister-in-law normally play with the Pops, although they weren’t available the day of the concert. So I was a natural go-between.”

Cuocci explained further, “The Pops have a history of playing in Malverne. They have a following all over Nassau County. They’re overwhelming professional musicians — 90 percent, I think, are primarily professional musicians. I think the residents of Malverne really appreciated the music.”

The Pops treated the audience to a wide array of hits, including classic selections from Duke Ellington and George Gershwin. From the movies, they performed a medley from Hans Zimmer’s “Pirates of the Caribbean” score, along with hits from MGM films including “The Wizard of Oz” and “Singin’ in the Rain.” They turned to Broadway as well, playing selections from the works of Andrew Lloyd Webber.

Pops Maestro Louis Panacciulli noted the orchestra’s relationship with Malverne. “We started playing here a long, long time ago, when Cathy Hunt was the mayor,” he said. Hunt served from 1987 to 1991. “We were close by, and I had an opportunity to meet her. I asked her if I could bring the orchestra, and she said OK. So we came; that’s when we started. Intermittently we’ve been coming back over the years.”

This performance was the group’s first in Malverne since the beginning of the coronavirus pandemic. Panacciulli said that Covid-19 had bought the group’s activities to a halt. “We were here one year before Covid hit,” he recounted. “But after that, the orchestra was out of business for two years.”

The Pops have since managed to return to a semi-normal schedule of performances, however. Their Malverne concert was the last in a series of summer performances in parks throughout Nassau County, including their concert in Eisenhower Park on July 15. “During the summer we usually do five, six, seven concerts, depending on how many we’re able to book,” Panacciulli said. “So every year we’re in different parks. A lot of times the park will want to skip a year, so we have other ones that we’re going to go to for next year.”

The Malverne summer concert series continued on July 22 with a performance at the gazebo park by the Risky Business Band, which covered songs of the 1950s, ’60s, and ’70s. The series will continue on Aug. 6 with a performance by rock group the Verge Band at Crossroads Farm at Grossmann’s, at 7 p.m.