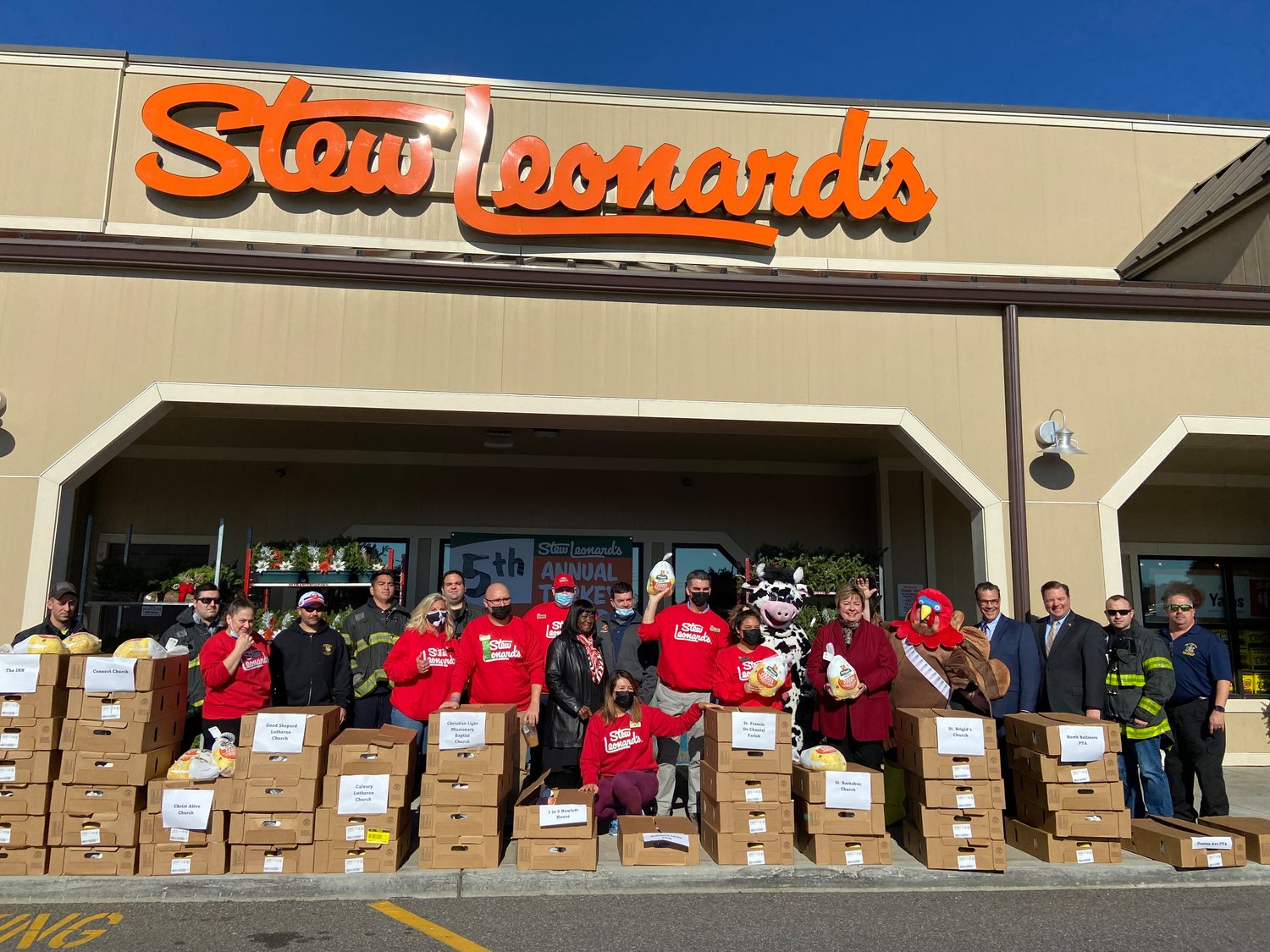 Members of the East Meadow Fire Department joined elected officials and Stew Leonard’s workers outside Stew Leonard’s on Nov. 18 to help give out over 40 boxes of turkeys ahead of the Thanksgiving holiday.

This is the fifth year of Stew Leonard’s tradition of giving out turkeys to help those who might not have meals for their Thanksgiving table has been in the community. Cars and trucks were lined up throughout the store’s parking lot waiting to pull up to the building to receive their turkey donations.

Stew Leonard’s started this tradition of donating turkeys to charities and local organizations near its supermarkets in 1979. The East Meadow location opened in 2017 and the store has continued the tradition ever since.

“This started back in the original store,” Joe Vota, vice president of operations for Stew Leonard’s said. “We like to be a part of the community, be family-based and there’s a lot of great people in East Meadow, a lot of great residents.

“We get a great reception,” he added. “We like to work with the churches and a lot of these people are our customers as well and love to help out.”

Charities can apply to be beneficiaries of the turkey giveaway, but others were selected after a representative of Stew Leonard’s called them and asked if they needed help with stocking their food pantries.

“When the organizations are selected we try to fit the number of turkeys they need the best we can,” Vato said. “We base it off of the need.”

Thanksgiving is a great time to put an emphasis on those in need of food but the need is constant, Christine Schulz, the treasurer and long-time member of Calvary Lutheran Church in East Meadow said.

“It’s very generous on Stew Leonard’s part,” Schulz said. “It helps a lot of families. A turkey can feed a family for a few days.”

Calvary Lutheran Church has been a participant in this turkey donation since Stew Leonard’s came to East Meadow five years ago, Christine Schulz, the treasurer and long-time member of Calvary said.

“It’s a very nice donation from them,” Schulz said. “What they do as an outreach to the community is even better. It’s heartfelt.”

The 15 turkeys they received will be going to the Luthern Social Services center in Uniondale, now known as the LIFE Center.

This is the third year that the East Meadow Fire Department has participated said John A. Priest, captain of Engine Company 1.

“This is our third year participating in this turkey event where they give away turkeys to needy organizations and churches and PTA’s and other places,” Jim Kane, the East Meadow fire inspector said. “They called us and asked us to participate as their community group like we have been for years.”

It’s a great way to give back to the community, Priest said.

“It’s good networking with the community,” Kane added. “It gets us to connect with them for public safety information as well as assisting with whatever their needs may be.”

Over 200 turkeys were donated locally to roughly 20 organizations such as nonprofits, food pantries, churches and PTA’s nearby to the Stew Leonard’s East Meadow location. In total, the company distributed 3,000 turkeys throughout the tri-state area.

The PTA organizations that participated included the North Bellmore PTA, which serves the North Bellmore School District’s five elementary schools. Each school has its own PTA board, and there is also a coordinating council that helps run events for the district as a whole. Aside from the Thanksgiving drive, the PTA also runs a coat drive through Coats for Kids, and a winter accessories drive.

“This is not the first year we’ve done this,” Michael Rut, PTA co-president from the John G. Dinklemeyer Elementary School said of the turkey distribution. “This year we got 20 turkeys — 4 for each school. They were distributed to needy families [in the district].”

Wendi Murphy, president of the North Bellmore PTA coordinating council said that each school runs a Thanksgiving food drive that consists of non-perishable and perishable items. The council works with Stew Leonard’s to secure turkeys to donate, she added. The identity of families receiving the turkeys remains anonymous.

The path to the Stew Leonard’s everyone knows now, is a humble one. Charles Leo Leonard started Clover Farms Dairy in Norwalk in the early 1920s. In 1969, his son Stew converted it into a retail dairy store that he called Stew Leonard’s. In 1987, Stew Jr. took over what eventually expanded into a six-store chain in Connecticut and New York. In December 2016, the chain opened its first Long Island location in Farmingdale and, about six months later, it introduced its second in East Meadow.

“Of course we have our heroes, local heroes, the members of the East Meadow Fire Department,” Town of Hempstead Supervisor Kate Murray said. “...I just wanted to say thank you so much to Stew Leonard’s for opening its heart to those in need.”

Jordan Vallone contributed to this story.