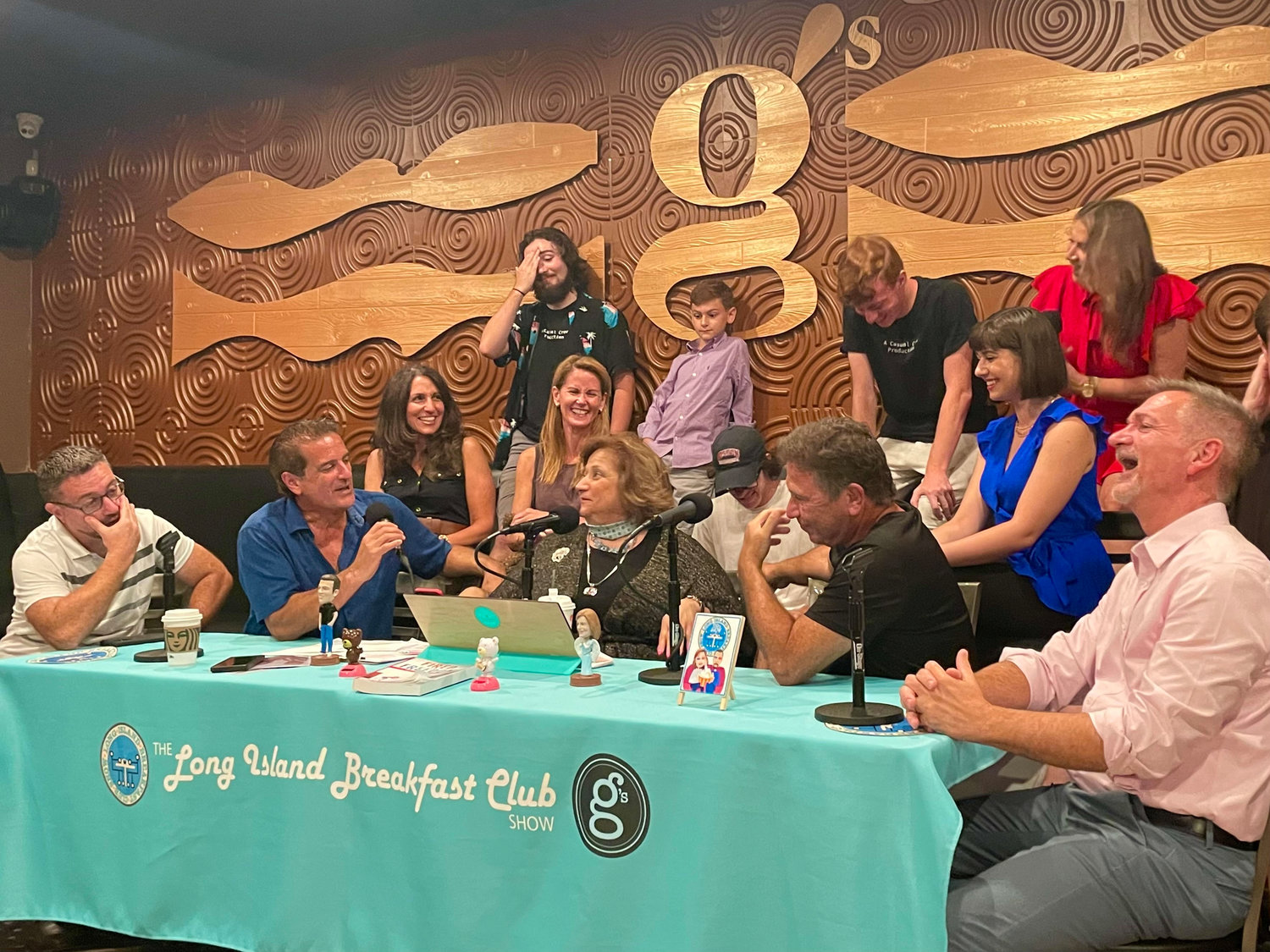 Long Island Breakfast Club Show host Valentina Janek, center, spoke with the cast of ‘The Fontanas,’ a new show in which she is also set to appear.
Kyle Chin/Herald Photos 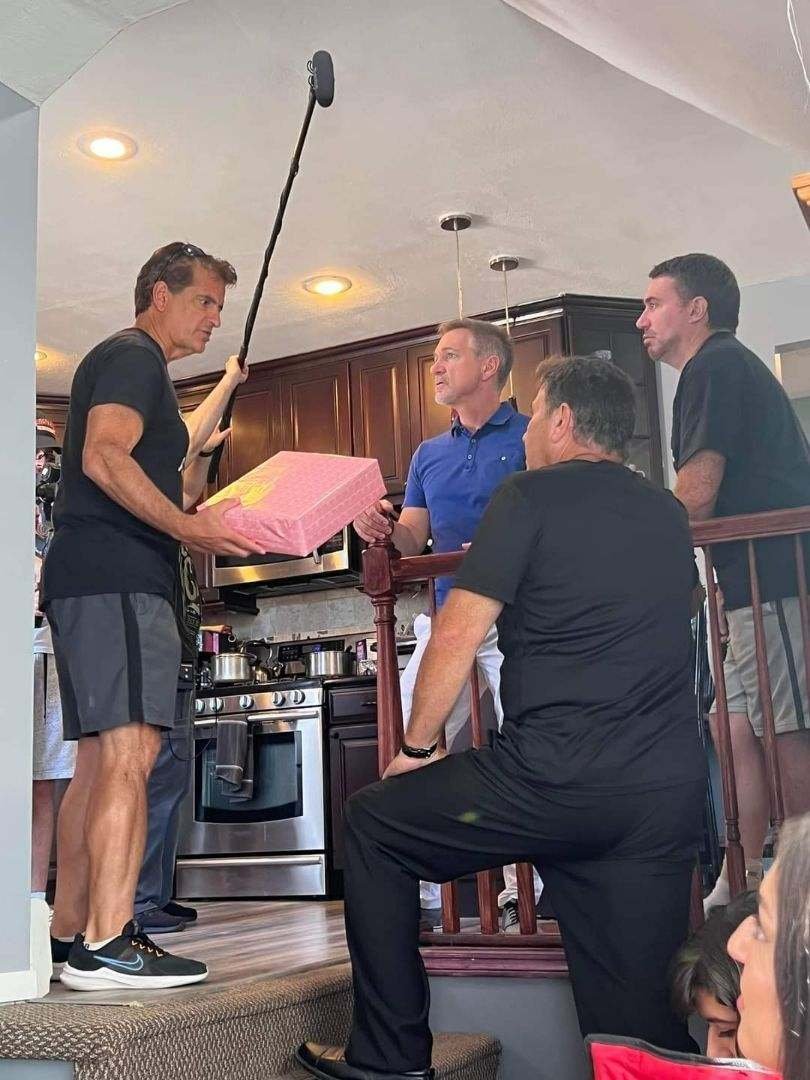 The cast and crew of the upcoming series “The Fontanas” took center stage at G’s club in West Hempstead on July 21 to record an episode of the Long Island Breakfast Club Show. The show, spearheaded by actor-director Gerry Ferretti, filmed scenes in G’s club and in the West Hempstead home of one of its actors in June.

“They’re a close family, but they go through a lot of turmoil,” Ferretti said. “We explore marriage and divorce and how three different generations deal with that, and it’s centered around achieving your dreams. A lot of things that I write have that central theme.”

A native of Lindenhurst, Ferretti filmed scenes at G’s and in locations across Long Island, including in West Hempstead. Ferretti gave special thanks to Spasso’s Pizza in Lindenhurst for standing in as a family business, but gave broader thanks for use of various locations.

“That assistance, that community help, is so important,” he said. “Having people like the pizza place, like our cast members, they gave us the perfect setting.”

Ferretti has organized the New York Long Island Film Festival since 2019, through which he first met a number of the show’s cast members, such as Laurent. “My film “Daybreak” was in the festival last year,” Laurent said. “It won several awards. It was very well received. There was such a great energy at the festival. I just knew that I would meet these people and I wanted to work with them.”

Laurent said he was skeptical that he would be cast for a role in “The Fontanas.” “Gerry put out this casting notice for “The Fontanas,” and I thought no one’s ever going to cast me as an Italian,” Laurent said. “I said, ‘Are there any non-Italian roles? I’d love to just come support your project.’ He ended up having me read for every role.”

Also joining the cast as the ex-wife of Ferretti’s character is actress-screenwriter Kathrina Miccio. “Gerry and I were just Facebook friends,” she said. “I’ve been an actor since 2000, so 22 years. I just happened to see the casting, and I’m like, ‘Wait a minute, I am Italian, and I’ve played these parts. I think I could do this.’

“We only had a few scenes because I’m an ex-wife, so I’m going to be more in the second episode,” Miccio added. “Gerry introduced my character through flashbacks and a nightmare. We had so much fun filming that, especially the nightmare, which was very, very funny. We had the crew, the cameraman, at very odd angles above the bed.”

“The Casual Crew,” a group of Long Island-based film students, has led the production on the series. Ferretti first met self-described “ringleader” Ryan Lewis when Lewis was a child community theater actor. “I was very excited to hear when Gerry reached out that he needed a crew,” Lewis said. “To have a way to give me and my friends work and an opportunity to gain knowledge and hone in on the craft is amazing.”

The crew has also used G’s club as a filming location for their own independent projects. “This nightclub is in so many movies, it’s going to be one of those landmarks that people go to see,” said Dominic Brocolo, a member of the crew.

Gregory Cajuste, G’s owner, and Valentina Janek co-host the Long Island Breakfast Club Show, a West Hempstead-based networking talk show streamed through Facebook live. Janek first began developing the idea of a local networking group when she lost her job at the age of 53. She used the setback as inspiration, penning “From Fired to Freedom,” highlighting her own story and those of 67 other women who lost their jobs.

She began developing the Long Island Breakfast Club, with the goal to amplify local entrepreneurs, small businesses, creatives and others, and to facilitate their collaboration.

Janek will appear in the series as the family’s matriarch, and scenes were filmed in her home. “I learned about how much time it takes to make a movie right,” she said. “The Casual Crew, they’re actually great kids, from the day I met them when they carried all my bags in.”

The crew is finishing up filming episode two, and Ferretti said he plans to premiere episode one at the next New York Long Island Film Festival, to be held at the Lindenhurst Moose Lodge in late October. “We hope to finish these episodes and have it picked by a streaming service,” Ferretti said. “That’s the goal.”