Local businesses to provide food and surf options on the boardwalk 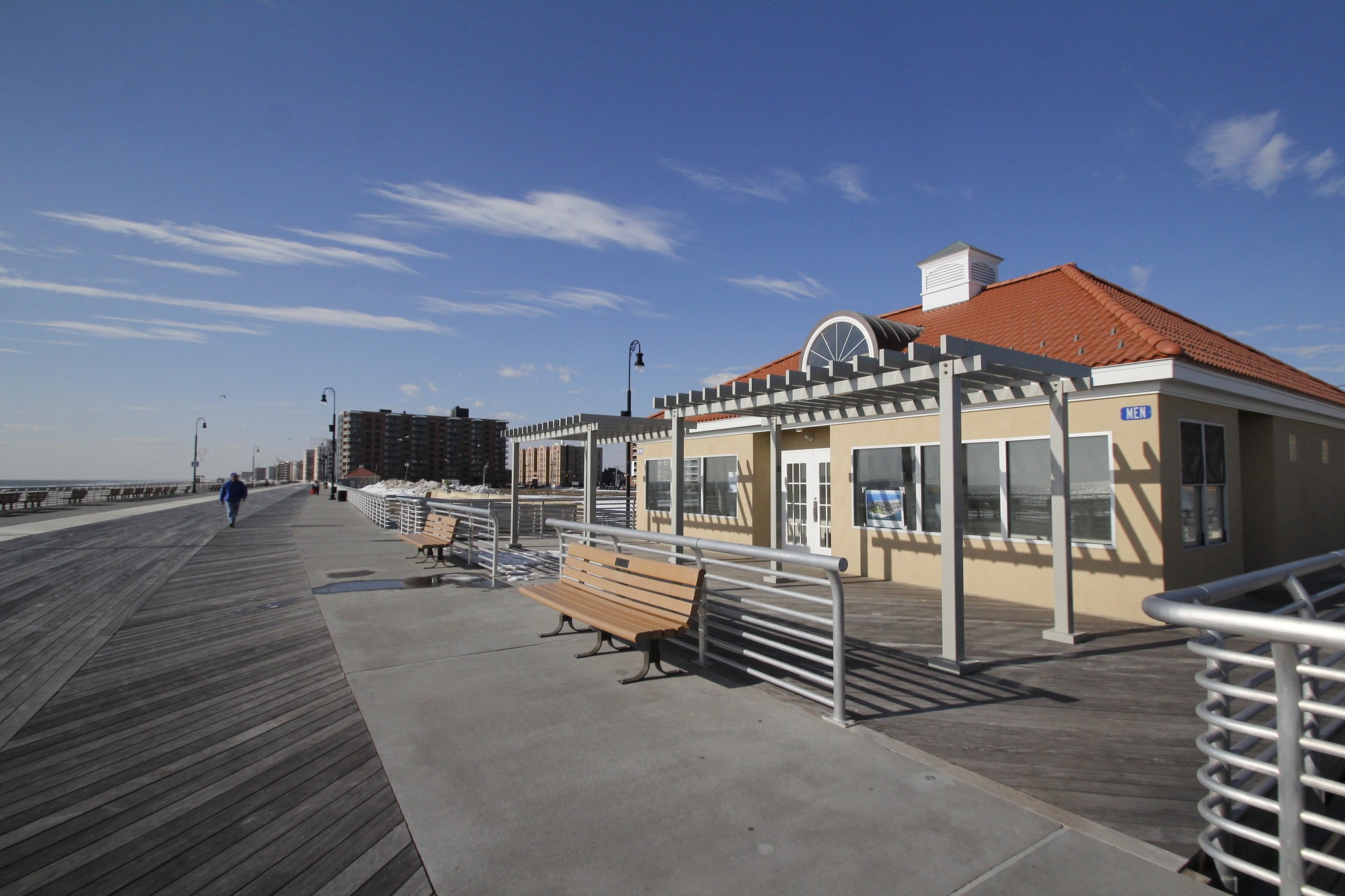 The city has selected local vendors for the new comfort stations along the boardwalk, like this one at Riverside Boulevard.
Christina Daly/Herald 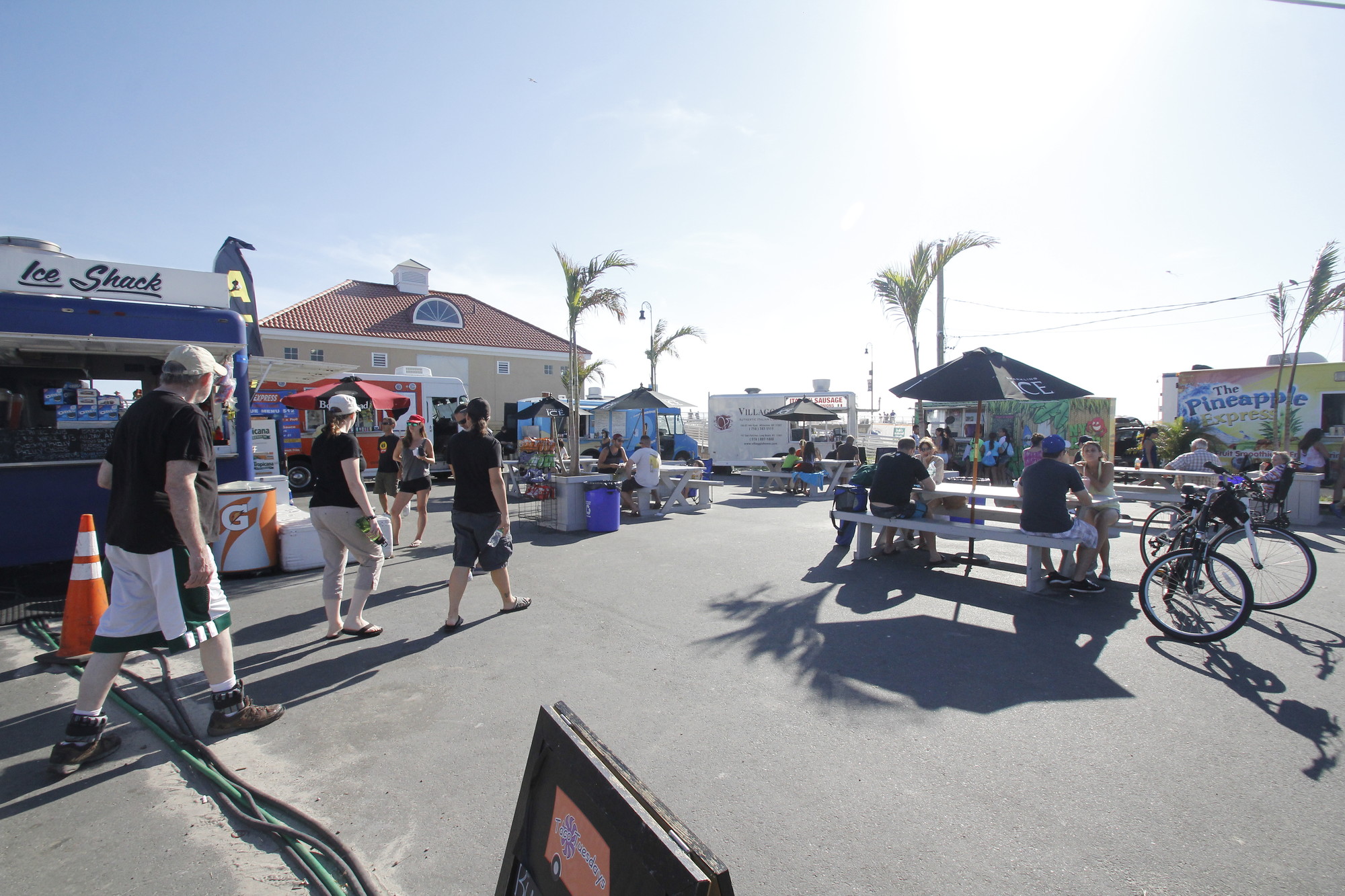 The City Council voted to keep the Shoregasboard food trucks at Riverside Boulevard and the boardwalk for the coming beach season.
Christina Daly/Herald
By Ben Strack

Visitors to Long Beach’s iconic boardwalk will now have more food options along the 2.2-mile span beginning Memorial Day weekend, after the City Council approved the vendors to occupy new comfort stations for the upcoming beach season at Tuesday’s meeting.

“Building on the success of years past, there will be an unprecedented variety of food options on the beach and boardwalk this summer,” City Manager Jack Schnirman said. “Five new comfort stations will be home to a diverse array of cuisine, including healthy options, further enhancing the local flavor and extending the season.”

Last year, the City Council voted unanimously to approve an $8.6 million project — which was reimbursed by the Federal Emergency Management Agency — to rebuild five comfort stations, complete with restrooms, at Grand, National, Edwards, Lincoln, and Riverside boulevards, which were destroyed by Hurricane Sandy. A sixth location, at Pacific Boulevard, will house concessions as well.

The city issued a request for proposals in January to occupy the structures from Memorial Day to Labor Day, with a special focus on finding local businesses that have previously provided services to Long Beach.

A committee led by the city’s Department of Purchasing director, Rosemary Alton, chose the merchants after a review of the proposals and subsequent rounds of interviews with the businesses. At Tuesday’s meeting, the City Council authorized Schnirman to enter into agreements with the merchants that will occupy the rebuilt structures, including refreshment hubs to be operated by Beach Local Café, Gentle Brew Coffee Roasters, Mavericks, Cones and Cups on the Boardwalk, Whale’s Tale and Point Lookout Deli.

The additional concession options will join the existing “Shoregasboard” food truck market and last year’s carts along the boardwalk and beach that will return this year, Schnirman said. He added that the city is projecting $181,500 in revenue from the carts, trucks and stations, which would more than double last year’s earnings.

“I think this is a historic day for our boardwalk,” City Council Vice President Anthony Eramo said at the meeting. “…What excites me the best is that almost every single one of these businesses is locally-owned or already a local shop.”

Skudin Surf school, run by Long Beach residents Cliff and Will Skudin, was also granted a location on the boardwalk, and will open the Hurley Surf Center at the Riverside comfort station. The center will be designed for surfers, from beginners to advanced, and will offer coaching, video analysis, appearances by Hurley’s global surfing team, professional photography clinics, ocean skills seminars and movie premieres.

“The center is a natural extension of our passion for sharing our love of water and surf, and helping to ensure a new generation of East Coast surfers,” Will Skudin, a professional big-wave surfer, said in a statement.

Sean Sullivan, the former owner of Swingbelly’s, is launching Beach Local Café at the Grand Boulevard comfort station. The rotating seasonal menu will consist of made-to-order items along with grab-and-go choices, including a variety of sandwiches, wraps and seafood dishes that feature locally sourced ingredients.

“I’m really happy to be a part of this next phase of the boardwalk restoration,” Sullivan said. “I’m looking forward to a great summer.”

Councilwoman Anissa Moore pointed out the importance of avoiding competition between the new stations and existing businesses, after a resident asked whether the stations would expand offerings to include beach products like hats and sunscreen.

Schnirman said in January that he believed the initiative would ultimately benefit the city, and that it was part of the city’s overall economic development program. Last year, the Empire State Development Agency awarded the city a $300,000 grant to promote tourism during the offseason.

Concession buildings are required to operate from the end of May to the beginning of September, but Schnirman said the city hopes to further extend the season in which concessions are available to beachgoers. He added that although the original RFP left open the possibility for the comfort stations to sell alcohol, the city has decided that vendors would be prohibited from doing so.

Sample menus for the new concessions will be posted on www.LongBeachLife.com.