West Hempstead man charged in the case of a caged, starved dog 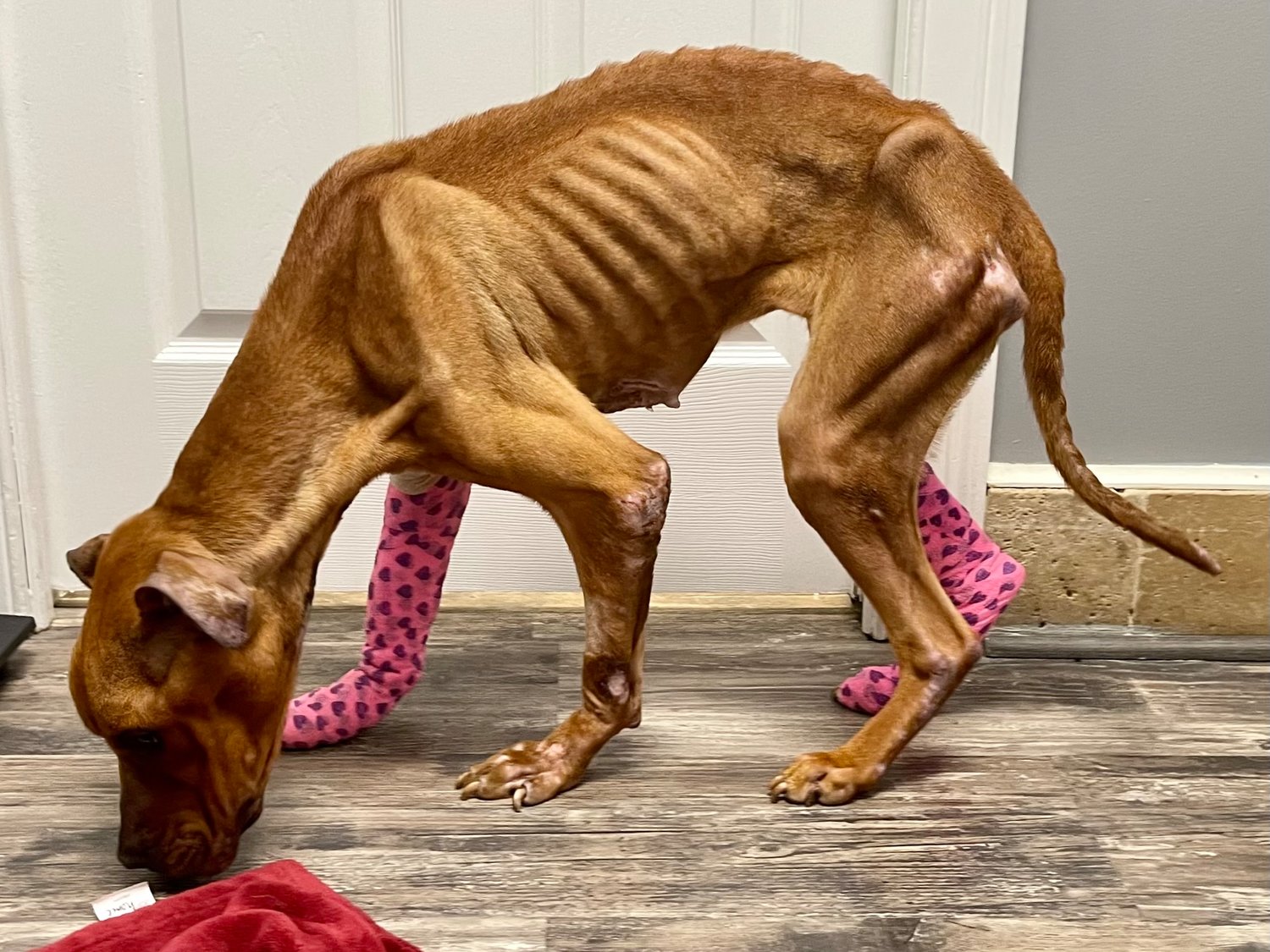 Animal shelter staff found an abandoned dog near death after the animal allegedly spent months caged and starving, authorities said.
Courtesy of Bobbi and the Strays 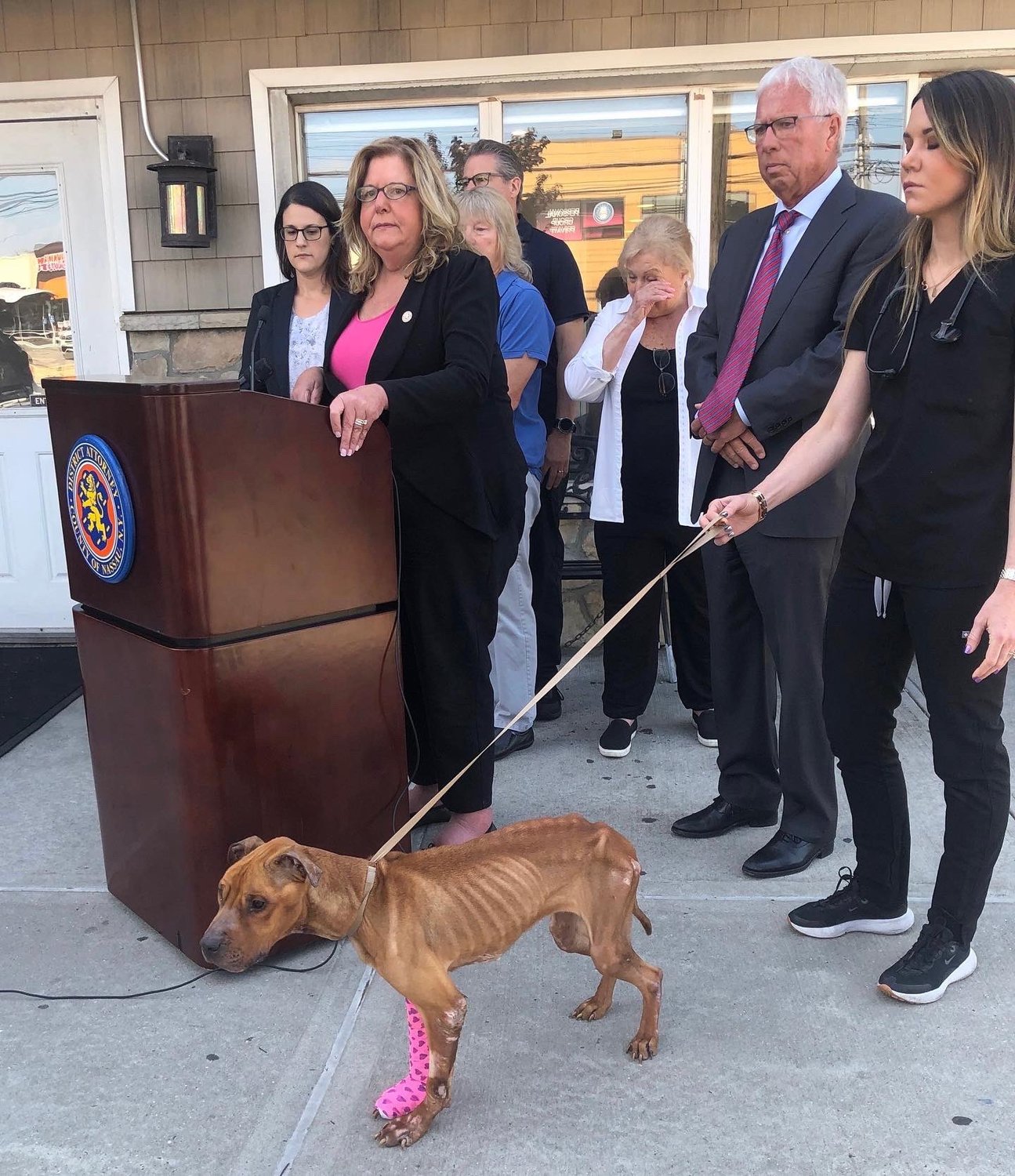 Nassau County District Attorney Anne Donnelly and other officials showed the extent of animal neglect at a press conference asking for the public’s help.
Courtesy Office of DA Anne Donnelly
Previous Next
By Kyle Chin

A 41-year-old West Hempstead man was arrested on July 21 and charged with the severe negligence and abuse of his dog, authorities said.

The dog, renamed Athena by veterinary staff who have cared for her, was found abandoned outside a Freeport animal shelter and faces a long road to recovery, while her former owner could face up to nearly a year in prison, authorities said.

The suspect, identified as Damian Douglas, allegedly purchased Athena from a breeder in North Carolina, when the dog was known as Skyy, officials said. Douglas kept the animal in a cage on an enclosed porch adjoining his home beginning in November, but he still regularly walked her, according to the Nassau County District Attorney’s office. Douglas is alleged to have stopped walking the dog in February and reported to have stopped taking her out of the cage entirely, the DA said.

Douglas allegedly left the dog in a crate outside the Bobbi and the Strays Animal Shelter in Freeport at about 4:44 a.m. on July 7, according to investigators. Shelter volunteers who discovered the animal found her in a harrowing state, suffering from extreme emaciation and numerous open sores, officials said. She was promptly transported to Howard Beach Animal Clinic for emergency care.

“She was lethargic, dehydrated, bruised,” said Lucecita Guevara of the animal clinic. “She was really emaciated and bleeding from a whole bunch of cuts. Her hind right leg was especially bad.

“We immediately put her on IV fluids, and we’ve been giving her medicines, vitamins and antibiotics,” Guevara added.

The veterinarians who are caring for her believe Athena is a mix of numerous breeds and is between four and five years old. Athena weighed just 29 pounds when she first came to the clinic and has since gained about 10 pounds. Guevara estimated that a healthy dog of that size and age should weigh about 50 pounds. With Athena’s extremely undernourished state, allowing her to overeat could lead to further complications, slowing her progress, Guevara added.

Gary Rogers, president of the Nassau County Society for the Prevention of Cruelty to Animals, said he was shaken by the case. “I’ve been doing this for 35 years. I’ve never seen anything this bad,” he said. “For months, the dog’s owner let it lie in its own urine and feces, allegedly since February.”

The DA’s office put out a call to the public on July 13 for anyone with information regarding the case, offering a $5,000 reward for information leading to an arrest. Nassau County District Attorney Anne Donnelly and other officials held a press conference with the bandaged, skeletal hound, showing the extent of the neglect the dog had endured.

“This is one of the worst cases of extreme confinement and animal cruelty we’ve ever seen in this county,” said Donnelly. “We take crimes against defenseless animals very seriously.”

Donnelly then thanked members of the public who called the DA’s hotline to help in the investigation.

Arraigned before Judge David Levine, Douglas has been charged under New York Agriculture and Markets Laws 353 and 355, which forbid the overdriving, torture, or unjustifiable injury of an animal and the abandonment of an animal, respectively. Both are misdemeanors, and Douglas was scheduled to return to court on Aug 2.

Officials said Athena is eventually expected to make a full recovery. She is not at a sufficient weight for veterinarians to perform necessary surgeries on some of her wounds, they said. Bobbi and the Strays’ staff anticipate that she will need a minimum of two months to recuperate, though the process may take longer.

A fundraiser organized by Bobbi and the Strays to cover Athena’s medical expenses quickly surpassed its target, but organizers have left the fundraiser active because they are unsure how much it will ultimately cost to bring Athena back to full health. “Everybody’s been so nice and generous,” said Guevara. “It warms your heart to know people still care, and that there are good people out there.

“She has a lovely personality,” Guevara said of Athena. “While she recovers somebody from Bobbi and the Strays comes by every day to spend time with her. She’s just great around people.”

Once Athena has substantially recovered, Bobbi and the Strays will make her available for adoption.