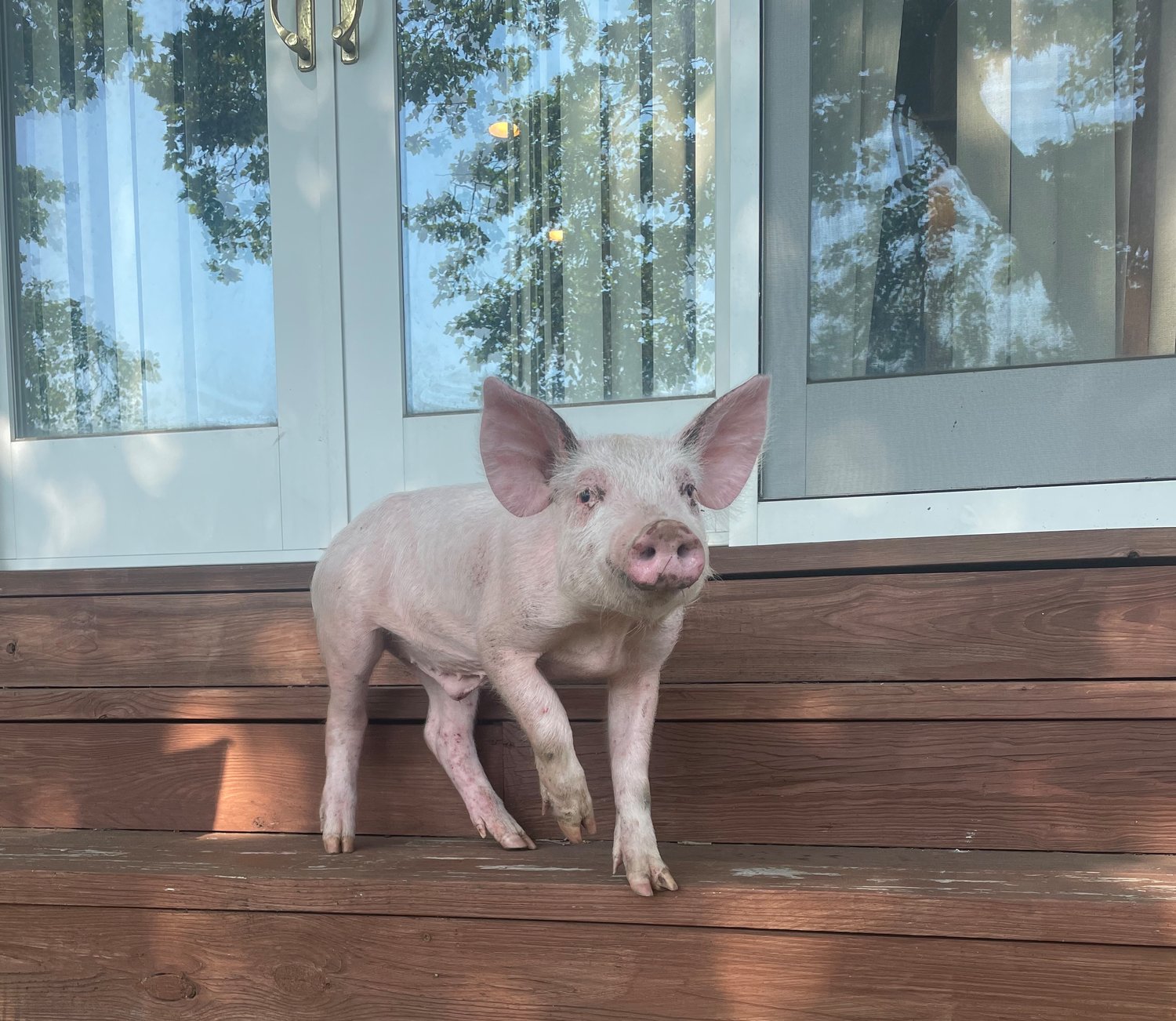 Howard, a factory farm pig, was rescued last month by a team of wildlife rehabilitators, including Karenlynn Stracher, of Merrick, and John Debacker, of Bellmore, after he was found stuck behind a fence in Howard Beach, Queens.
Courtesy Karenlynn Stracher 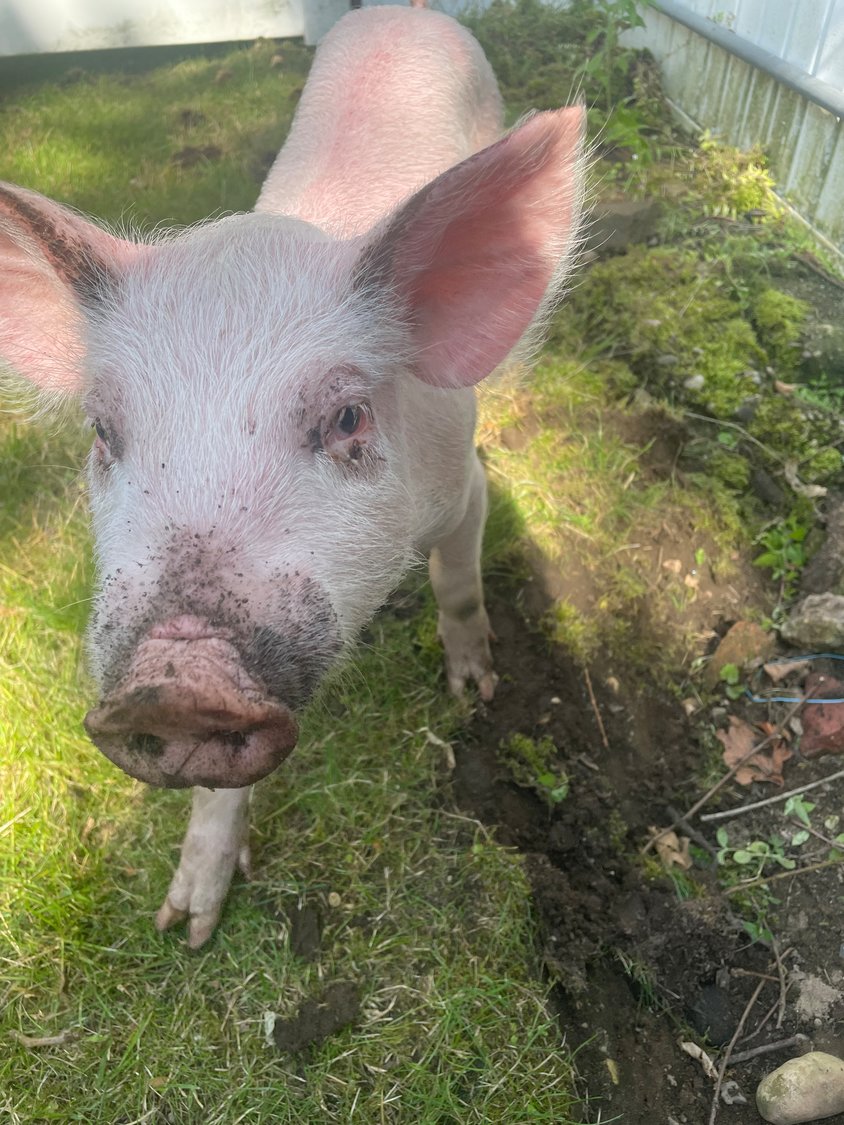 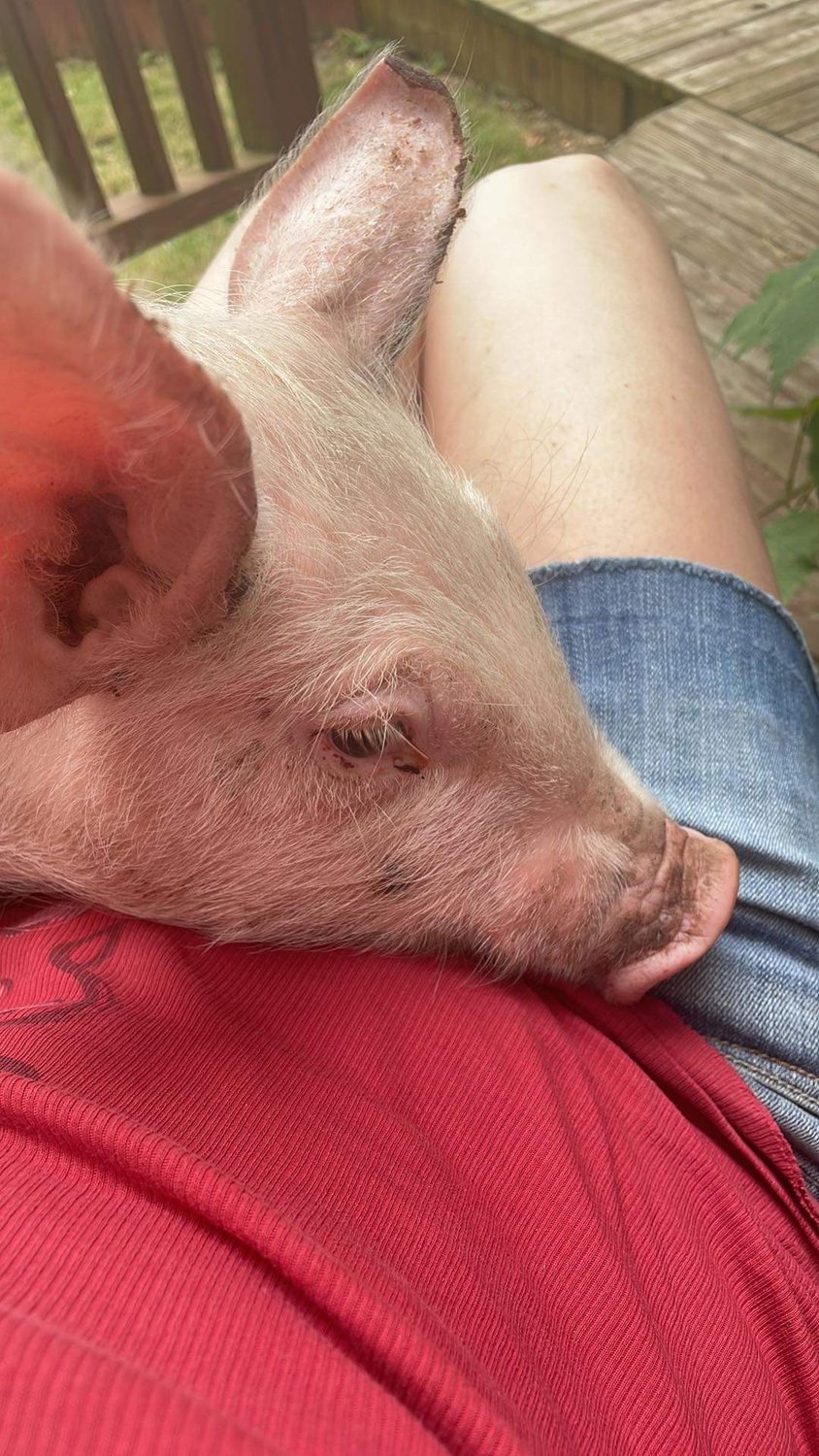 Howard, who will eventually grow to 800 pounds or so, quickly came to trust his rescuers, and bonded with Stracher.
Courtesy Karenlynn Stracher
Previous Next

The thought of anyone hurting this animal — or anyone like him — is unfathomable.”
Karenlynn Stracher, Wildlife rehabilitator
By Jordan Vallone

What started as a tip from a Facebook group that there was a farm pig severely injured and stuck behind a fence in Queens quickly turned into a late-night rescue operation on June 23, led by Karenlynn Stracher and John Debacker, wildlife rehabilitators from Merrick and Bellmore, respectively.

“I was in the supermarket,” Stracher recounted. “My group chat dinged — someone was walking by, heard rustling, got startled but went back to investigate. There was a pig, behind a fence, in Gateway National Park.”

Debacker, who is well known around Bellmore for his work with feral cats, found out about the pig on Facebook, and quickly got in touch with fellow rescuers, including Stracher. The two are friends, and have previously helped wildlife together.

By 10:30 p.m., they were involved in a chaotic scene, with a number of people and wildlife rescuers attempting to retrieve a 2-month-old pig from behind a fence in the park. The Gateway National Recreation Area is federal property, and the rescuers were unsure how to get through the fence without damaging it, but eventually, federal police arrived and granted them permission to cut through the barrier.

“Pigs can struggle; they don’t like to be picked up,” Stracher said. “I lifted him straight up — his spine was against my torso. I covered him with a towel, and he stopped struggling.”

“Between all of us, we rescued the pig,” Debacker said. “And it was a good thing there were so many people there. The pig did try to get away, but we were able to contain it.”

After placing it in a carrier, Stracher brought the pig — now nicknamed Howard, after where he was found — back to her Merrick home. The following morning she took him to a veterinarian, where the full extent of the piglet’s health problems was revealed.

Howard had conjunctivitis, mite bites and a bad skin infection, which left him bright red instead of light pink. His tail had been severed, 16 ticks were found on his body, and he had two different parasites in his gastrointestinal tract.

“The thought of anyone hurting this animal — or anyone like him — is unfathomable,” Stracher said.

How Howard ended up in a park in Queens is a mystery, but there is at least one theory. John DiLeonardo, an anthrozoologist and a leader in animal advocacy on Long Island, said that the pig was likely illegally purchased at a live market to be used in a sacrificial way.

Stracher added that this wasn’t the first time they had seen an animal abused like this. Goats and sheep, among other farm animals, have been found injured or dead in the past.

“There are no live markets in the five boroughs that are allowed to sell anything but poultry,” Stracher said. “So where are they coming from?”

Back in the pink

Howard is now on the road to recovery, Stracher said. He is making great progress, has gained weight, and is enjoying life as a free pig. Pigs are generally known to be smart animals, and Howard quickly proved his intelligence.

“It wasn’t until Friday afternoon that he was free from his carrier,” she said. “Since Friday, he’s learned to trust. He’s amazing — he is by far the smartest animal that I’ve ever had the privilege interacting with.”

The goal, DiLeonardo said, was to get Howard placed at a sanctuary farm, where he could live the rest of his life comfortably. “We want to get him to a vegan animal sanctuary — no petting zoos,” he said. “We’re going to make sure he’s going to a good home where he can get the life he deserves.”

“I just want to get him someplace where he can be loved, with other pigs, with humans who will be kind to him,” Stracher added. “That’s really important to me.”

The placement process for factory farm pigs like Howard is tricky, and expensive. He was bred to be eaten, and though he weighed just 37 pounds when he was rescued, he will eventually grow to close to 800. A GoFundMe page was established to raise $10,000 to help assist in Howard’s placement at a farm.

“These farms have a dowry kind of situation,” Stracher explained. “The money is going in the bank, it’s invested, and goes to cover the lifelong care of the animal.”

Howard can live to be anywhere between 10 to 15 years old, and because he’s a factory farm pig, he may encounter some health complications as he gets older.  “He’s not a naturally occurring species,” Stracher added. “He’s bred for food. They have lots of orthopedic problems because the skeleton can’t hold the weight.”

After a week, the page had raised sufficient funds, and on July 1, DiLeonardo said that a home had been found for Howard at Safe Haven Animal Sanctuary in upstate Poughquag.

Stracher, Debacker and DiLeonardo, who in their work as wildlife advocates have aided animals in need from Manhattan to Montauk, consider Howard’s rescue, recovery and placement a success story.

A vegan, DiLeonardo said it is easy to forget where meat comes from. “When pigs are killed and processed into bacon, hotdogs and other animal-derived foods, it can be easy to forget that what you’re eating once had eyes, a heart and feelings, just as we do,” he said. “But pigs like Howard are sensitive, complex individuals — who want to live just as much as you or I.”