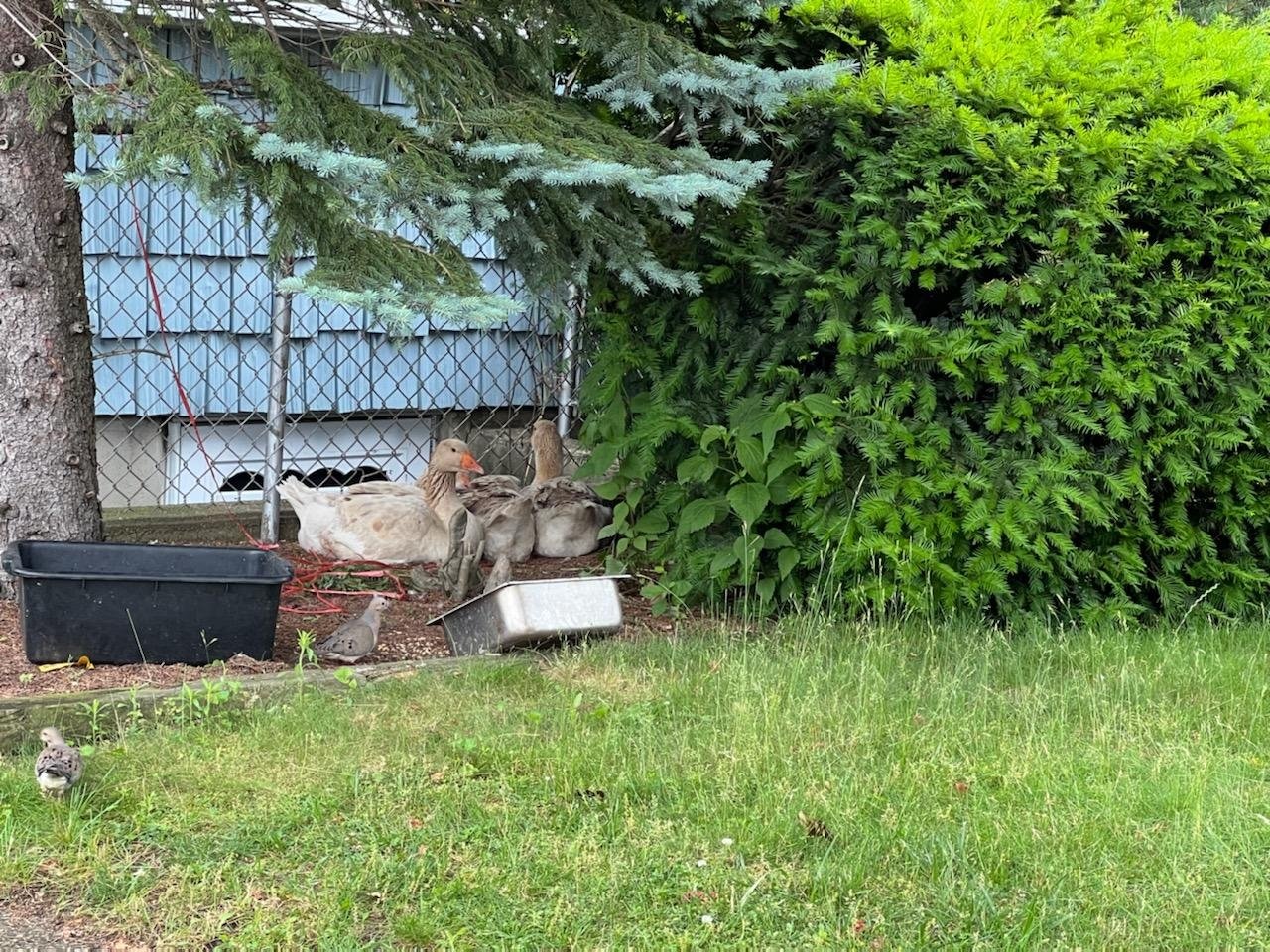 Abandoned domestic water fowl have been found in Bellmore and Merrick this summer. Buff geese were found chained to a fence in Merrick.
Courtesy John DiLeonardo 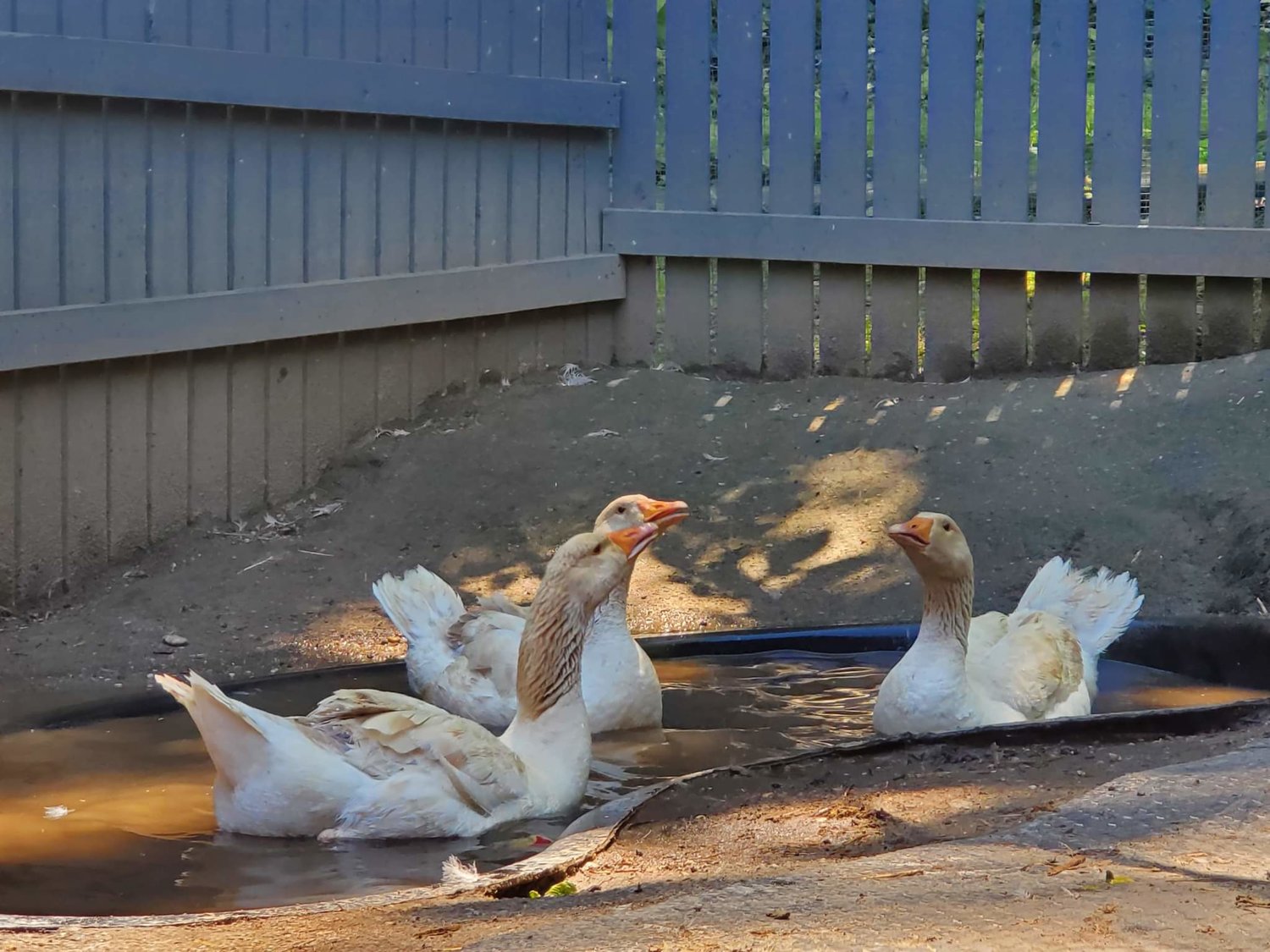 In the Town of Hempstead, it is illegal to own domestic water fowl. The geese, which suffered bruising and wing injuries, are now recovering, having been rescued by Humane Long Island.
Courtesy John DiLeonardo
Previous Next
By Jordan Vallone

According to John DiLeonardo, an anthrozoologist who runs Humane Long Island,  the abandonment of domestic water fowl is always an issue on Long Island. This summer, however, Bellmore-Merrick seems to be a hotspot for reports of injured birds, that are not meant for life in the wild.

Humane Long Island is the leading animal advocacy group on Long Island, and campaigns for animal rights from Manhattan to Montauk. The group regularly rescues and aids all types of animals, including domestic water fowl — species of birds and geese that are not a standard a wild bird, such as a Canada goose or mallard duck. In the Town of Hempstead, one can not legally own or house domestic water fowl.

“They’re as different from wild ducks as a house cat is from a tiger,” DiLeonardo said. Compared to a wild duck or geese, domestic water fowl are usually larger and have very different feather colors, such as white, which make them prone to predators.

DiLeonardo said Humane Long Island received a photo of a Peking duck in Bellmore, a large, white bird that is normally bred to be eaten. The duck had a bone infection, which likely started as a cut on its foot, that became a staph infection before it spread to the bone. DiLeonardo added Humane Long Island ended up recovering a whole flock of Peking ducks in Bellmore, a few of which had bumble foot, a bacterial infection that occurs on the feet of birds.

In Merrick, three buff geese were recovered from a home, when Humane Long Island received word from the Nassau County Society for the Prevention of Cruelty to Animals that someone found them chained to a fence. The geese suffered bruising on their legs, and their wings were butchered, DiLeonardo said.

“They’re not flighted birds,” he said. “There’s no point in trimming their wings.”

How birds like the rescued water fowl end up at people’s homes is not a mystery. Tractor Supply Company, a chain of home improvement stores that has locations in Suffolk County, sells ducklings. People may wish to obtain them as pets, DiLeonardo said, or for photo shoots around Easter, and then eventually release them back into the wild. Additionally, classroom projects in schools that involve hatching and raising ducklings are another major cause for domestic water fowl being released.

“They mean well,” DiLeonardo said of people setting ducks free. “But they do not realize they can’t survive.”

Legally, stores are not allowed to sell ducklings in groups of less then 6 if the birds are under two-months-old, because the ducklings can, and oftentimes will, imprint on their human caretakers. Humane Long Island has cracked down on places that do not follow this rule. Birds that come from places like Tractor Supply Company are products of factory farms, where thousands of birds are kept in close quarters, where disease can spread.

“We want to shine a spotlight on this,” DiLeonardo said. “A way to protect these animals is by not doing school hatching projects and by not supporting these businesses that are keeping these animals like this.”

For people who live in Bellmore or Merrick, or any hamlet in the Town of Hempstead, DiLeonardo said if people see ducks or geese that are larger, unusually colored, overly friendly, and not capable of flight, they may be domestic water fowl. To get help, contact Humane Long Island via their website, humanelongisland.org, and stay with the animal until help arrives.