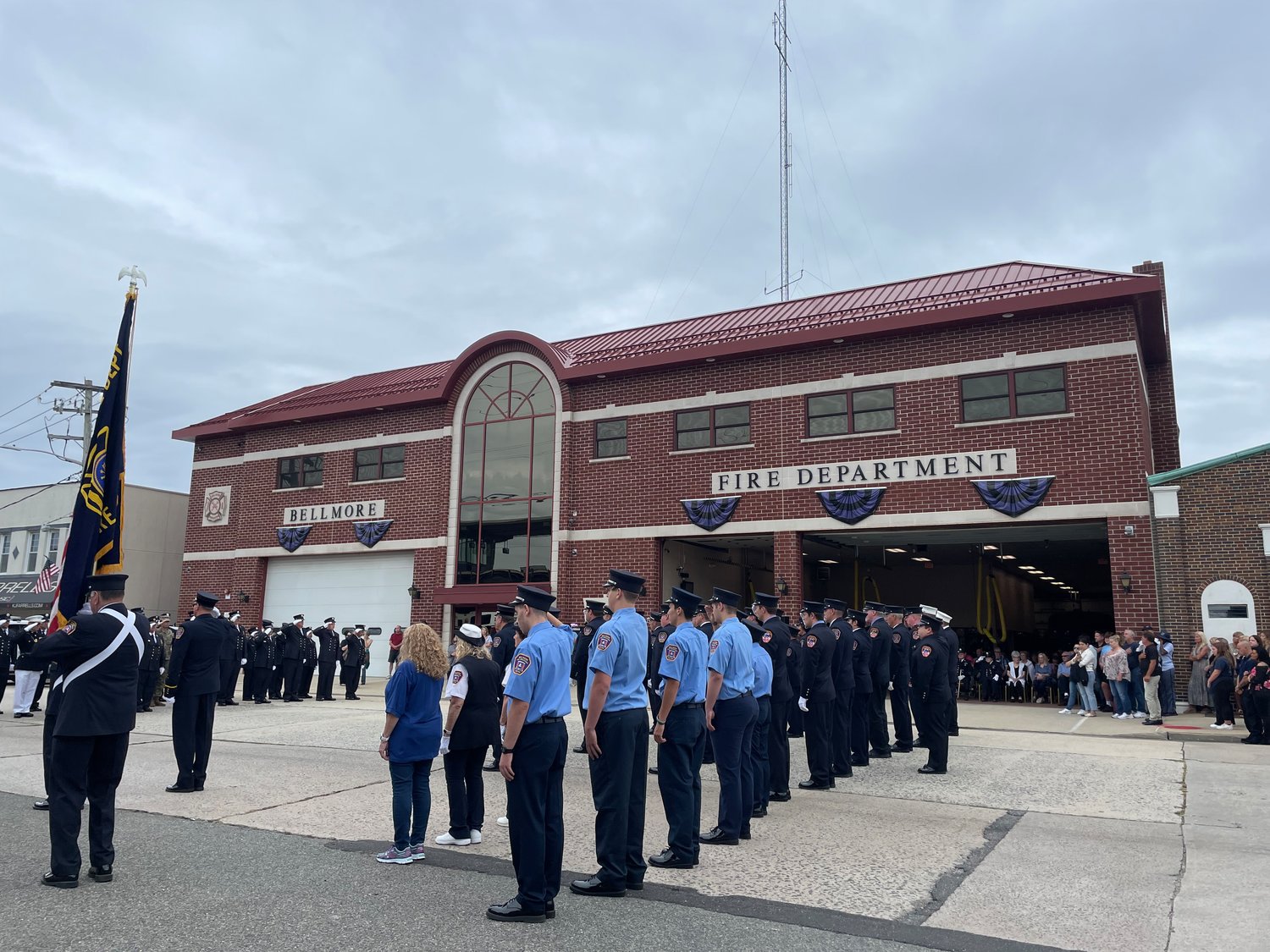 At the Bellmore Fire Department’s Sept. 11 memorial ceremony on Sunday, department members from both the Bellmore and North Bellmore departments stood in salute to honor and remember the fallen.
Jordan Vallone/Herald 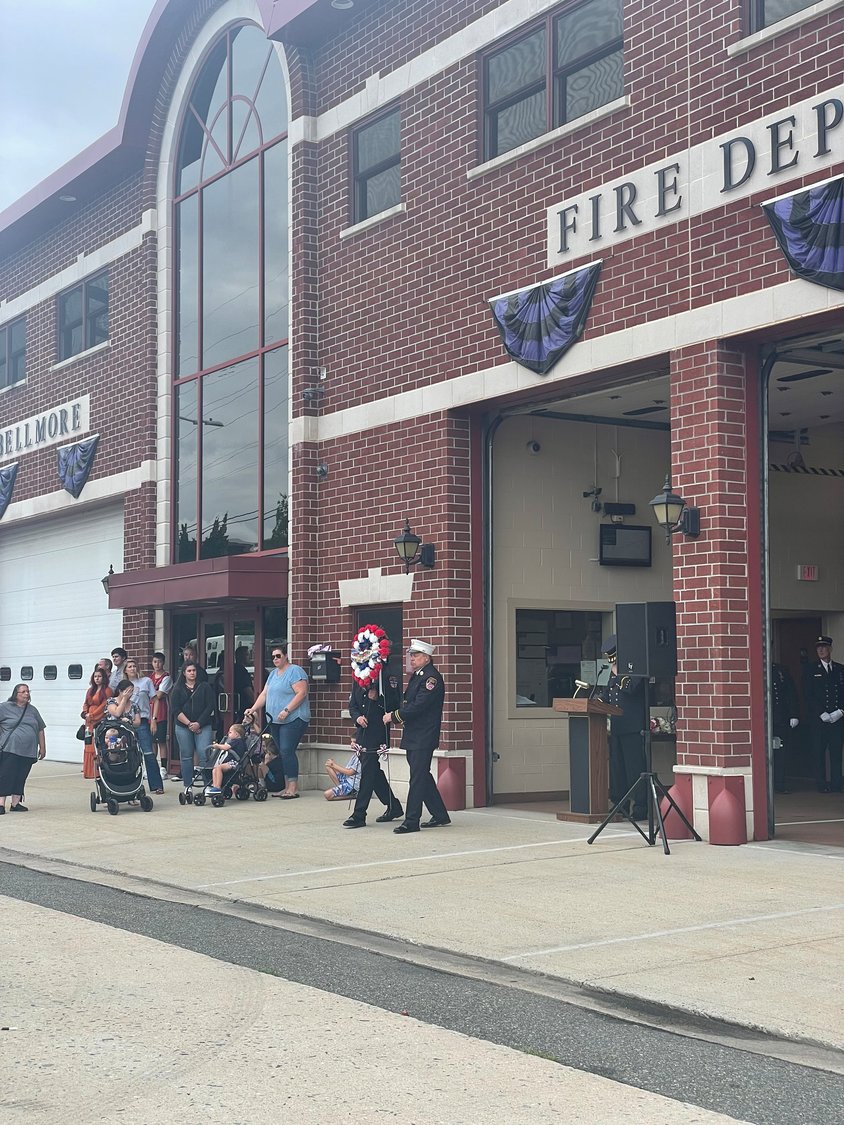 Yearly, wreathes are walked out to Bellmore’s Sept. 11 memorial, in honor of firefighters Kevin Prior, Adam Rand and Sean McCarthy. Their family members place flower bouquets in front of the wreathes.
Jordan Vallone/Herald 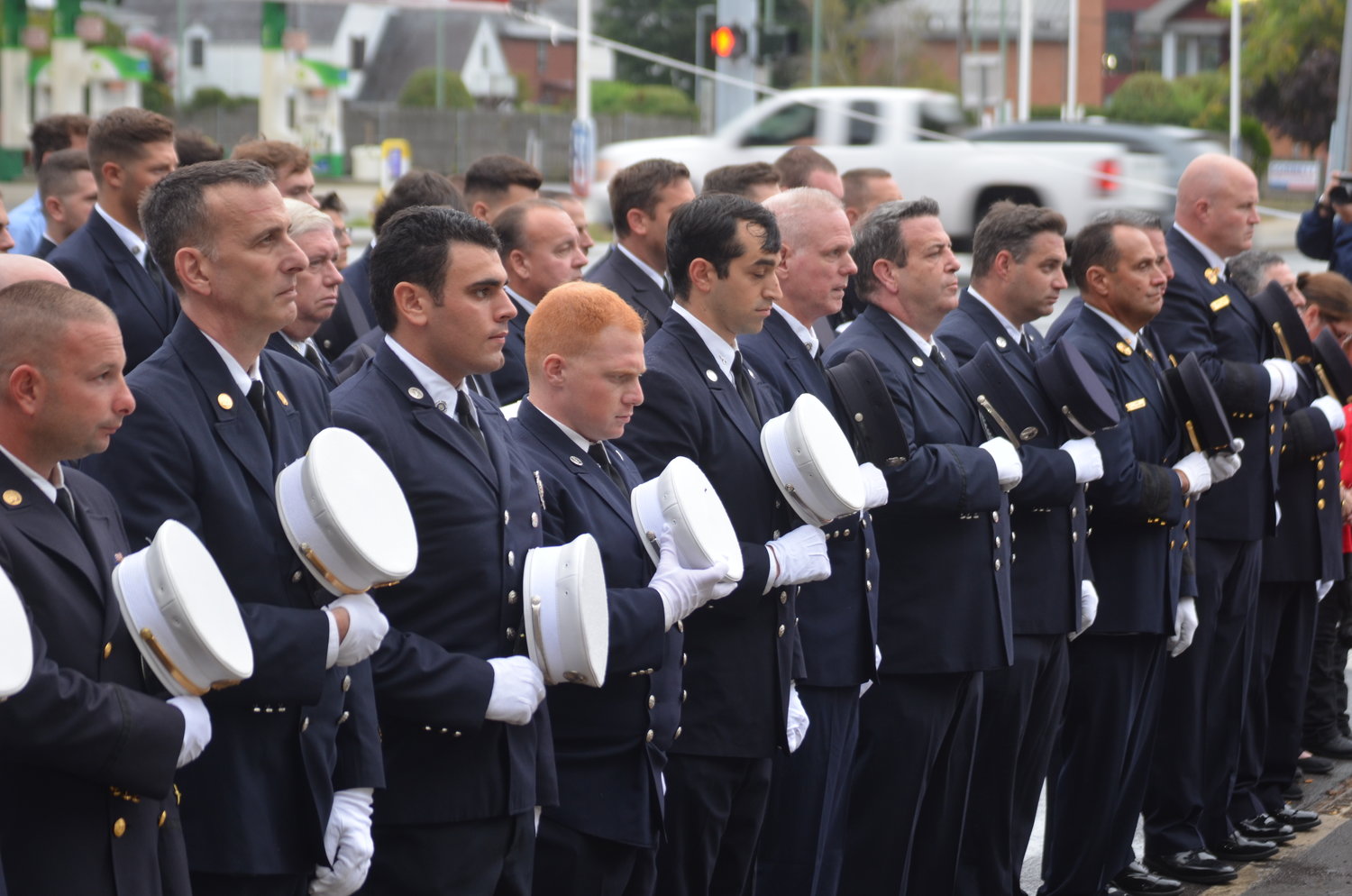 Firefighters in Merrick lined up, with their caps across their hearts, to commemorate the solemn day.
Tim Baker/Herald 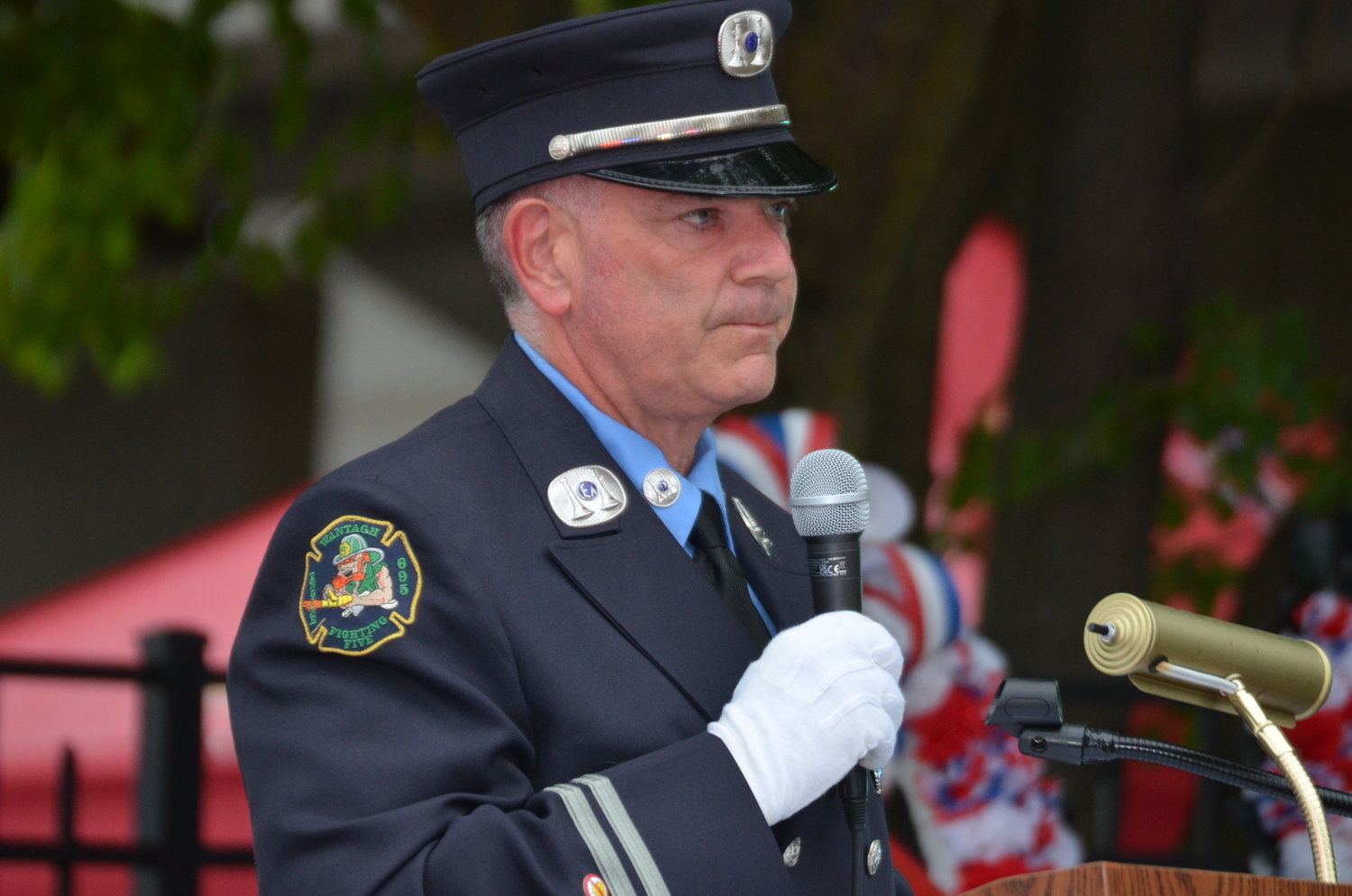 Nassau County Legislator Steve Rhoads, a volunteer firefighter himself in Wantagh, took part in the Merrick ceremony, at the intersection of Sunrise Highway and Merrick Avenue.
Tim Baker/Herald 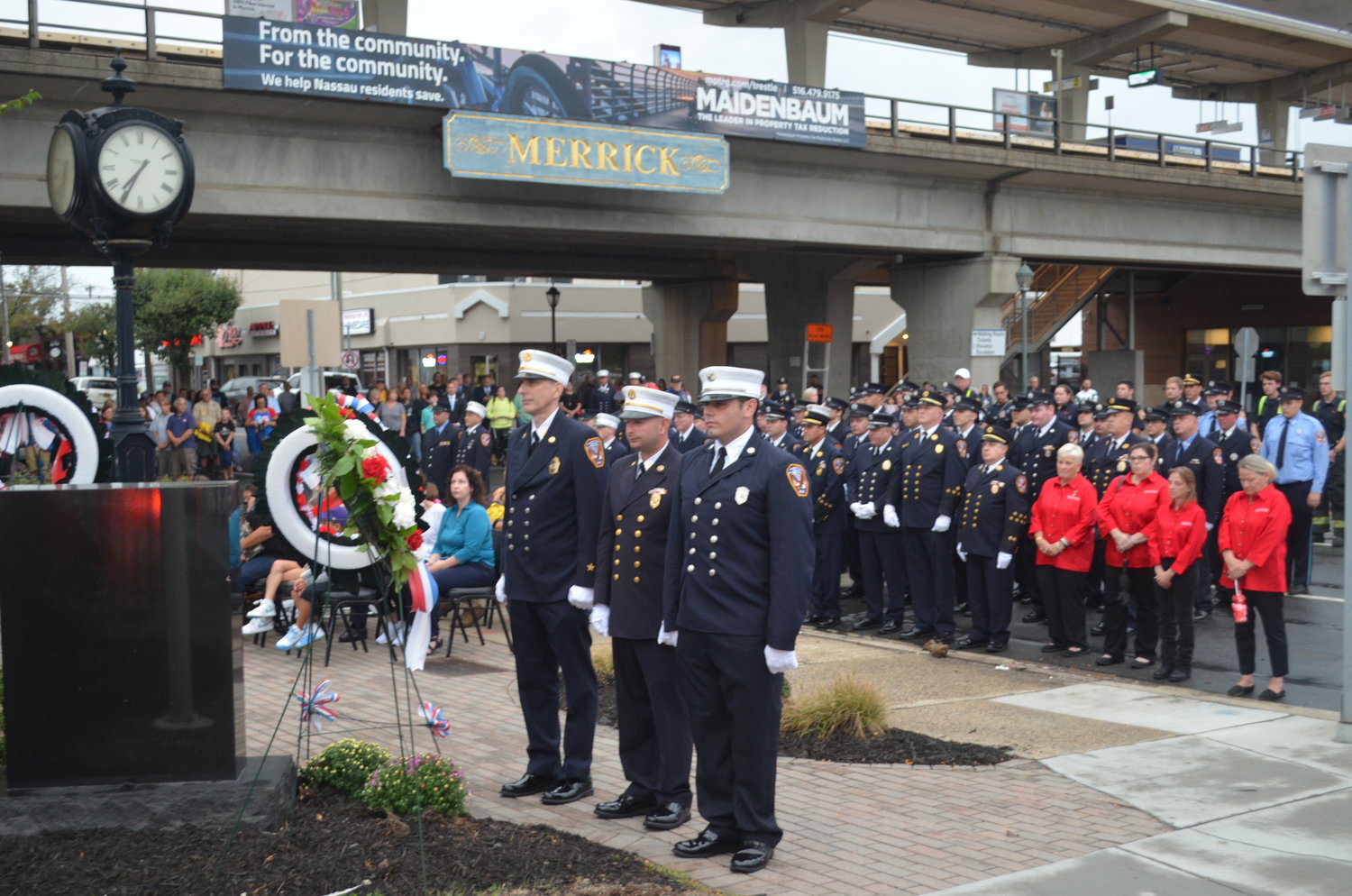 Wreathes in honor of the Merrick department’s ex-chief Ronnie Gies and ex-captain Bryan Sweeney are laid out every year.
Tim Baker/Herald
Previous Next

The grey clouds and light drizzle of rain did not mask the solemn mood felt across Bellmore-Merrick on Sunday, as the community and first responders commemorated the 21st anniversary of the Sept. 11 attacks on the World Trade Center.

At the Bellmore ceremony in front of the Bellmore Fire Department’s headquarters on Pettit Avenue, the department remembered its two volunteers and New York City firefighters Kevin Prior and Adam Rand, who died while performing rescue operations on the day of the attacks. In 2008, the department also lost volunteer firefighter Sean McCarthy, who responded to Ground Zero, and succumbed to a 9/11-related cancer.

Following the playing of the National Anthem, and a few speeches, three wreathes in their names were walked out to the department’s Sept. 11 memorial by members. The families of Prior, Rand and McCarthy also took part in the ceremony, by placing flower bouquets in front of the wreathes, in their honor and memory.

In Merrick, the ceremony is perhaps best known for the massive American Flag, that is hung parallel to Sunrise Highway, often grabbing the attention of many passerby, who honk in support of the department.

The Merrick memorial is at the corner of Sunrise and Merrick Avenue, alongside a steel girder from one of the tower’s. A portion of Merrick Avenue was closed, so ceremony attendees could gather in the street for the service.

Each year, wreathes are laid for ex-chief Ronnie Gies, and ex-captain Bryan Sweeney, who gave their lives that day. Gies’s three sons are all members of the department, and his son, Ronnie, is now the department’s chief.

“He was a great person — he’s all of our heroes,” Gies said last year. “He was amazing. He makes it tough every year because we miss him a lot.”

Town Councilman Anthony D’Esposito, a former chief of the Island Park Fire Deparment, attended the ceremony, and shared some remarks about the department’s late ex-chief on Facebook.

“My message to my neighbors in Merrick was simple,” D’Esposito wrote. “Be kinder, promote peace and love (the) community —  that’s exactly what heroes like Ronnie Gies would have wanted.”

At the Bellmore ceremony, the department’s Chaplain Dennis Rich shared a message with the ceremony’s attendees.

“The novelist William Faulker wrote ‘The past is never dead. It’s not even past,’” Rich recited. “This profound insight is certainly true of 9/11, twenty-one years ago. Over 3,000 died that day. The death toll mounts. The evil continues.

“We pray that bravery and unselfish heroism continues,” he said, “in the daily deeds of those who respond to disaster.”

County Legislator Steve Rhoads, a volunteer firefighter himself in Wantagh, often attends the Merrick ceremony. Last year, Rhoads remarked the enduring lesson from Sept. 11 is, “that we must never be afraid to recognize evil for what it is, to call it by name and to be united in our standing against it.”