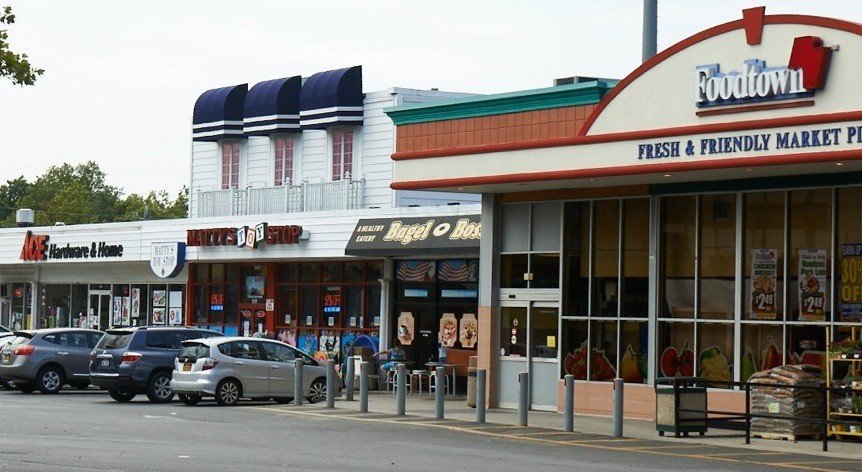 Hewlett-Woodmere Faculty Association members fanned out across the school district, including the Peninsula Shopping Center, above, to support businesses and enhance its scholarship.
Basser-Kaufman
By Jeff Bessen

More than $1,500 was added to the Community Service scholarships the Hewlett-Woodmere Faculty Association awards with five members first purchasing $100 gift cards and certificates from 20 local businesses and then raising the money by raffling off the cards and certificates to HWFA members who bought tickets for the drawing.

In August, HWFA President Ric Stark and members Susan Albergo, Caryn Bachar, Joann Brown and Leslie Rose bought the gift cards from stores in the Peninsula Shopping Center in Hewlett, businesses along Broadway and others in the area. Bachar noted the group bought the cards with their personal money, then were reimbursed by the HFWA.

Rose brought the fresh idea to the HWFA from her connection with Kevin Coyne, president of the Brentwood Teachers Association. Coyne sent Rose fliers on BTA’s scholarship program. During a Zoom meeting of the HFWA’s Solidarity Committee, Coyne answered the many questions HFWA members asked.

“Helping with the scholarships is one way to help our students, while building community at the same time,” Rose, a second grade teacher at Ogden Elementary School, wrote in an email. “It gave us great pleasure to purchase gift cards from local businesses knowing it was part of a greater plan to increase scholarships.”

To raise the money to enhance the scholarships, a gift card list was sent to HWFA members, then each member could buy raffle tickets to win the gift cards of their choice.

Bachar called it a “truly a collaborative group effort across each building.” The raffle drawing took place at the HWFA’s Welcome Back Solidarity Social on Oct. 1.

“As a resident as well as a teacher in the district, there is nothing better than knowing you are supporting the children and community in which you work and live,” Bachar stated in an email. “There were shop owners who were so used to being asked to donate, that they were incredulous when we explained that we are buying the cards, not asking for donations; that this was our way to thank them for years of donations and to help them during a most trying 18 months.”

She teaches English as a New Language to grades three to five at Ogden Elementary School.

The Community Service scholarships are given to students in each of Hewlett-Woodmere’s five school buildings: Hewlett High School, Woodmere Middle School, Hewlett Elementary School, Ogden Elementary School and Franklin Early Childhood Center. One scholarship is also award to a private school student who lives in either Hewlett or Woodmere.

“The awards are to recognize students who have made positive contributions to their schools and community,” Stark said an email. “Often they go to students who are leaders in service-related activities in their schools, or (especially in the younger grades) who are particularly helpful and kind to their classmates.”

Teachers from each building and those who work in the Five Towns private schools choose the scholarship winners. The awards are typically presented at the Hewlett-Woodmere Board of Education meeting in May.

The scholarship values varies by level, said Stark, adding that there will be a meeting in January or February to discuss how to award the additional money.

“We are now able to increase the amounts presented to students, and support our community,” Bachar stated. “Due to the success, we can expand the number of businesses next year.”