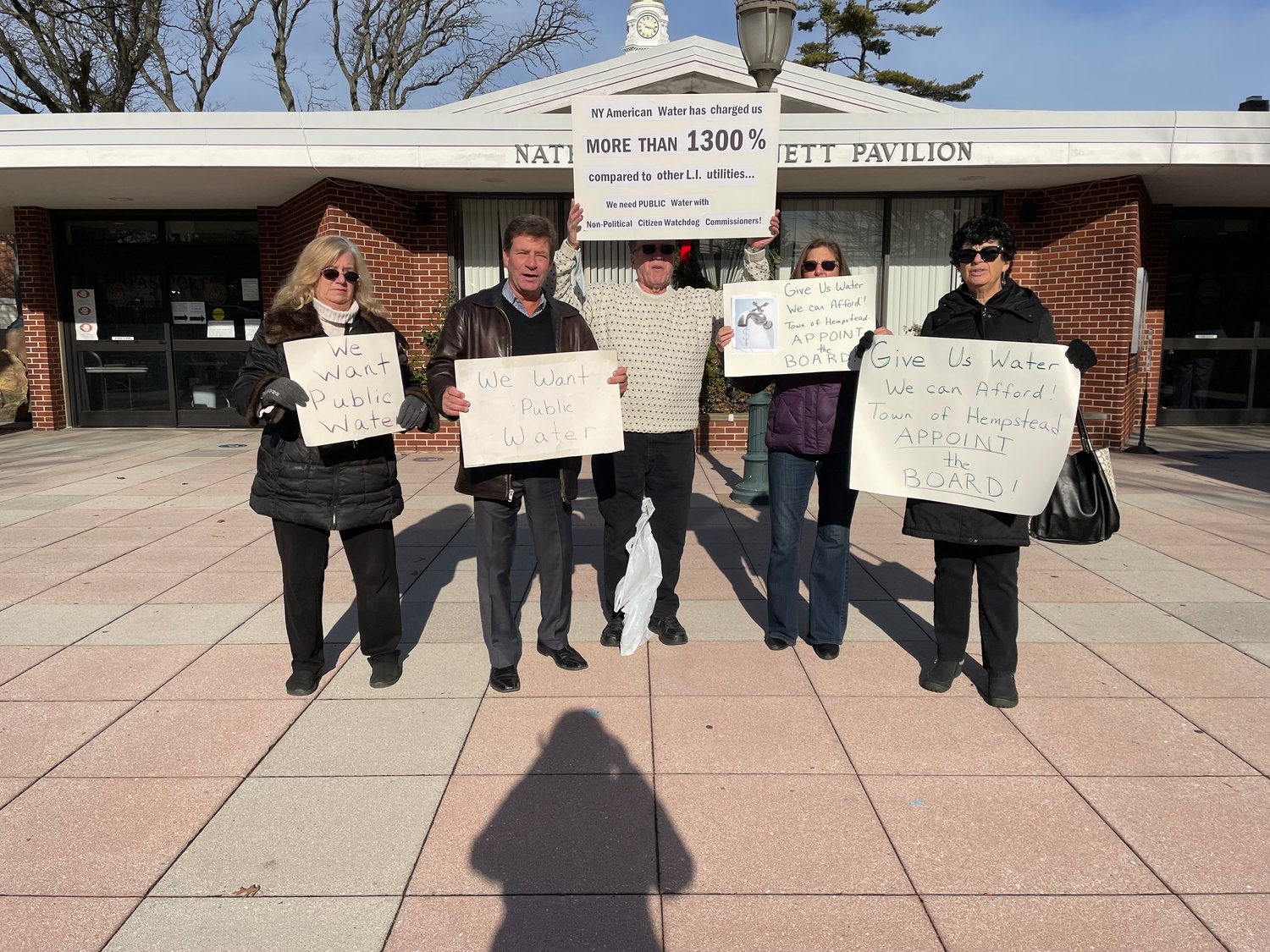 On Dec. 7, the fight for the public takeover of New York American Water continued in Hempstead outside of the Town of Hempstead Town Hall.

Governor Kathy Hochul signed the South Nassau Water Authority Act into law on Nov. 3, providing a path for the public acquisition of the privately owned NYAW, which serves approximately 113,000 people in the Town of Hempstead. Because NYAW is privately owned, the Town of Hempstead is allowed to tax their property; the people who pay those taxes are those who receive water from NYAW.

The Merrick-based Long Island Clean Air, Water and Soil advocacy group gathered outside of town hall, where the town board was having their last public meeting of the year. As per the new bill, the town is required to appoint three people to the South Nassau Water Authority board. The other 2 board members are to be appointed by the Nassau County legislature. At the time of the protest, no board selections had been made. The deadline for these appointments is Feb. 1, 2022.

According to former Nassau County legislator Dave Denenberg, who is a co-director of CAWS, the town has a longstanding history of denying public water to the 15% of its residents who receive private water.

“When I was a county legislator, in around 07, 08, there was a big outcry because the latest rate of water at that time made it very, very obvious how much more — it was called New York Water Service at the time — was charging than other public authorities,” Denenberg said. Denenberg is a Merrick resident who receives NYAW.

At water rate increase hearings in 2009 and 2010, Denenberg said people came out in support, demanding that the public service commission turn down the rate increase, and implement the public authority — the Water Authority of Southeast Nassau County.

“In 2012, [the town] started doing a feasibility study that they didn’t finish until about 2014,” Denenberg said, to see if a public authority was possible. “The company which did the feasibility study said it was feasible — except for political reasons the town [was] saying this new authority would have to pay taxes. As soon as I was out of office in 2015, they dissolved the [public] water authority saying it was not feasible. The town is up to the same tricks.”

“The town did a study and showed it would cost about 450 million dollars or less [to implement a public authority],” according to Denenberg. “They turned around and said its going to cost over 500 million. The state called them out on it, because the town was denying the results of their own feasibility study.

“We want the town board to know that all of the excuses are over,” he added. “We need results.”

CAWS’s co-director Claudia Borecky, who also lives in Merrick, said the current fight for public water was “like déjà vu.”

“Years ago when Dave urged the town of Hempstead to reconstitute the last water authority it took them 9 months before they appointed the commissioners to that authority,” she said. “We won’t let that happen again.”

Borecky said that the South Nassau Water Authority Act was written so that the town can’t procrastinate in naming 3 commissioners.

“They have until Feb. 1 by law to establish the appointees, yet they haven’t even started the interviewing process,” she explained. “This is the last [board] meeting for this year so it needs to be done as soon as possible.”

Compared to Town of Hempstead residents that receive public water, those who receive NYAW pay close to $2,000 a year for water.

“When I was paying my mother’s bills in the South Huntington Water District and paying my bills in the New York American Water district in Baldwin, I was paying about 116 dollars for my bill, and only 8 dollars and change for my mothers bill — for the same amount of water during the same period,” Jack McCloy, a protestor from Baldwin said.

“It is crazy how much more NYAW charges customers here and utilities that are public,” he added. “We need a change.”

Denenberg also explained that CAWS would like the appointed commissioners to meet certain requirements.

“We need those commissioners to be independent, nonpartisan, and civic minded people with experience in finance, law, government and municipal takeovers to get this job done,” he said.

“We deserve water, tax free, just like everyone else,” Denenberg said. “The town has given us all kinds of excuses without giving us results. “They need to do right thing already — appoint these people to the board.”

The Town of Hempstead was contacted regarding the appointment of commissioners to a public water board, but was unable to provide a comment.