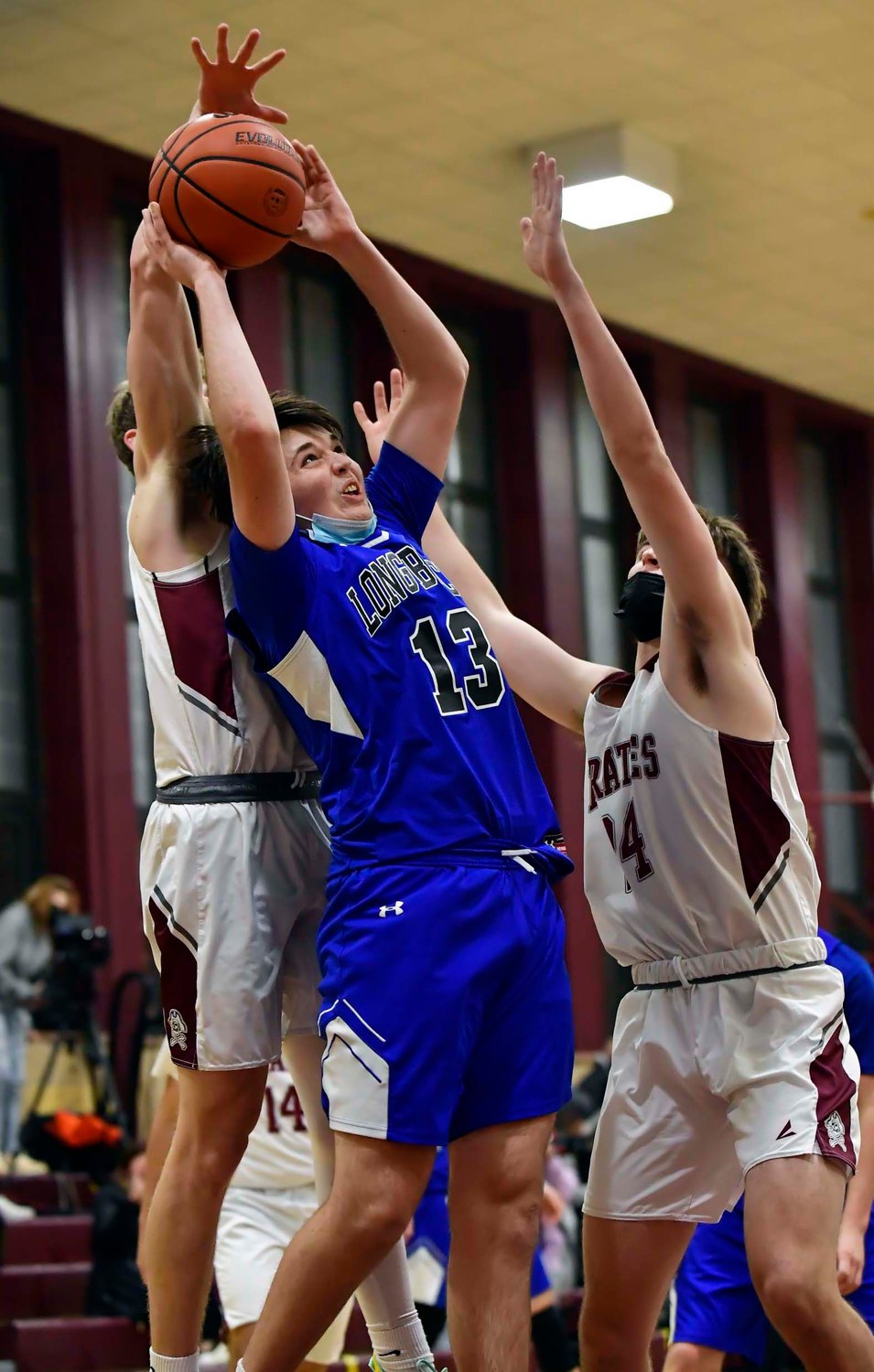 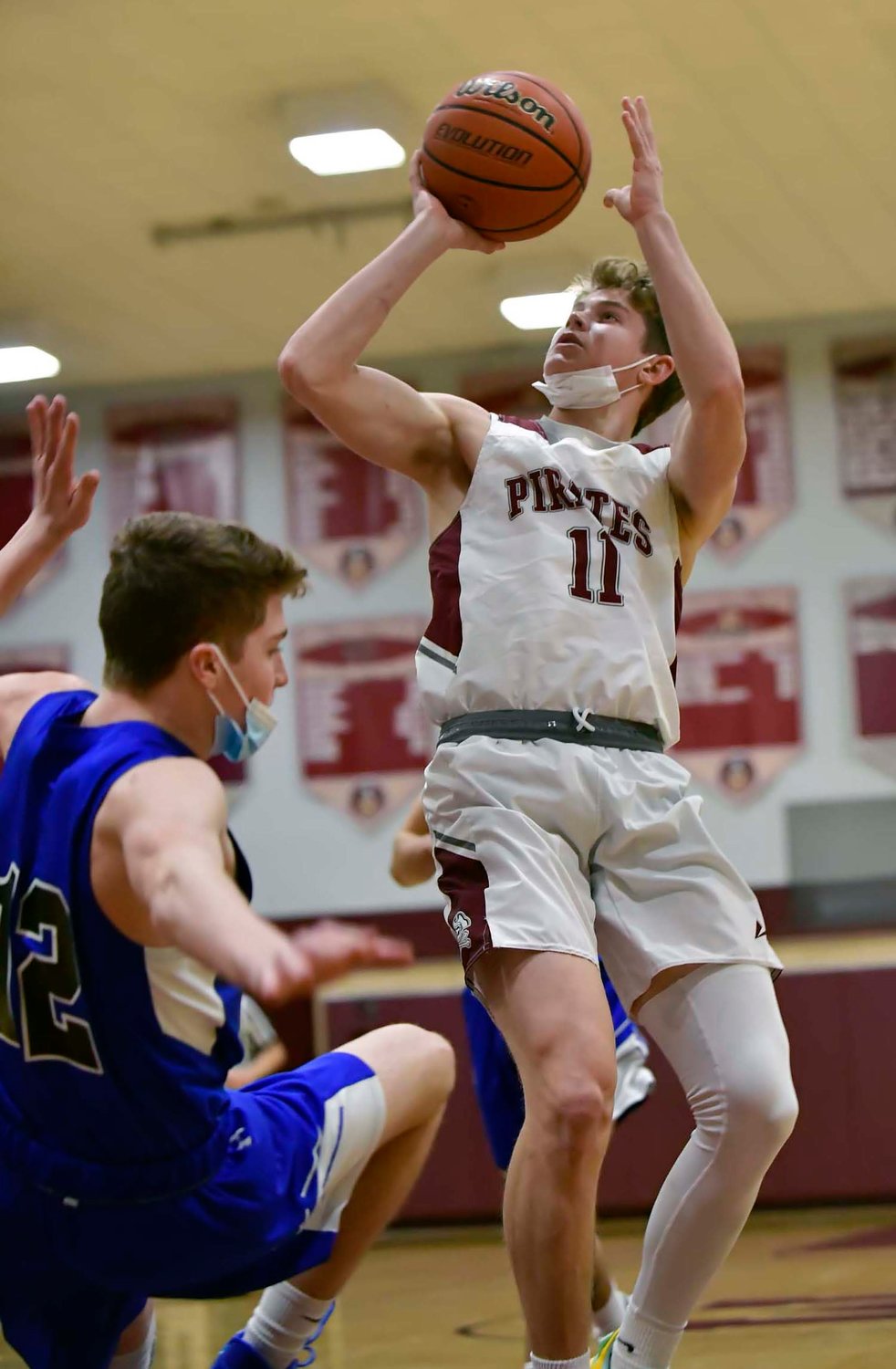 Mepham senior Robert Tansey, right poured in a game-high 27 points on Jan. 6 but the Pirates fell short against Long Beach after a strong first half.
Anthony Hughes/Herald
Previous Next
By Tony Bellissimo

For the second time in three nights, Long Beach overcame a sluggish first half to secure a Nassau Conference A-1 boys’ basketball victory.

The Marines trailed at Mepham by seven points at halftime Jan. 6 before scoring 17 in each of the last two quarters for a 54-41win. Sophomore point guard Mike Main led the offense with 19 points including a 9-for-11 performance from the foul line, and senior forward Bret Michaels scored 12 of his 18 points in the second half and grabbed 10 rebounds as Long Beach improved to 3-1 in A-1 and 5-4 overall.

Senior forward Robert Tansey poured in a game-high 27 for the Pirates (2-7 overall), who lost their fourth conference game in as many tries.

“We’ve had nice stretches in every game, but we’re just not as consistent as we need to be,” Mepham head coach Bob Kaible said. “Tonight was probably the best first half we’ve played all season. In the second half, we got away from running our offense at times and they really hurt us on the boards. They had too many second and third chances.”

Behind Tansey, the Pirates enjoyed their second-highest scoring opening quarter of the season when they raced to an 18-12 lead. Tansey accounted for half of their points through the opening eight minutes and had 17 at halftime, 3 fewer than Long Beach.

“I think we probably took those guys a little lightly and I give them credit for coming out strong,” Long Beach head coach Scott Martin said. “We had no weak-side help in the first half and the Tansey kid hurt us. But the third quarter has been our best quarter all season and that’s what I told the kids at halftime.”

The Marines, who scored 20 third-quarter points on the way to rallying for a 55-49 victory over Great Neck North two nights earlier, outscored Mepham by a 15-1 margin after senior Timmy Burns gave the hosts a 30-22 advantage early in the third with his second trey of the game.

Michaels, Main and junior Jack Shields were instrumental in the comeback, combining for all of Long Beach’s points in the third. Michaels had 7; Main and Shields 5 apiece. Main’s three-pointer with 3:15 remaining in the quarter put the Marines ahead for good at 32-30.

“This is their gym and it’s a tight court and it took us a while to get going,” Martin said. “We moved the ball much better in the second half and started to take advantage of the mismatches Bret can provide. He’s so versatile we can use him inside or outside depending how teams want to guard him.”

As was the case against Great Neck North, Main sank 7 free throws in the fourth quarter to seal the outcome.

“The biggest things we need to do are improve our rebounding and consistency,” Kaible said. “If we execute like we did in the first half tonight, there’s nobody we can’t beat.”

The rematch is Feb. 2 at Long Beach.