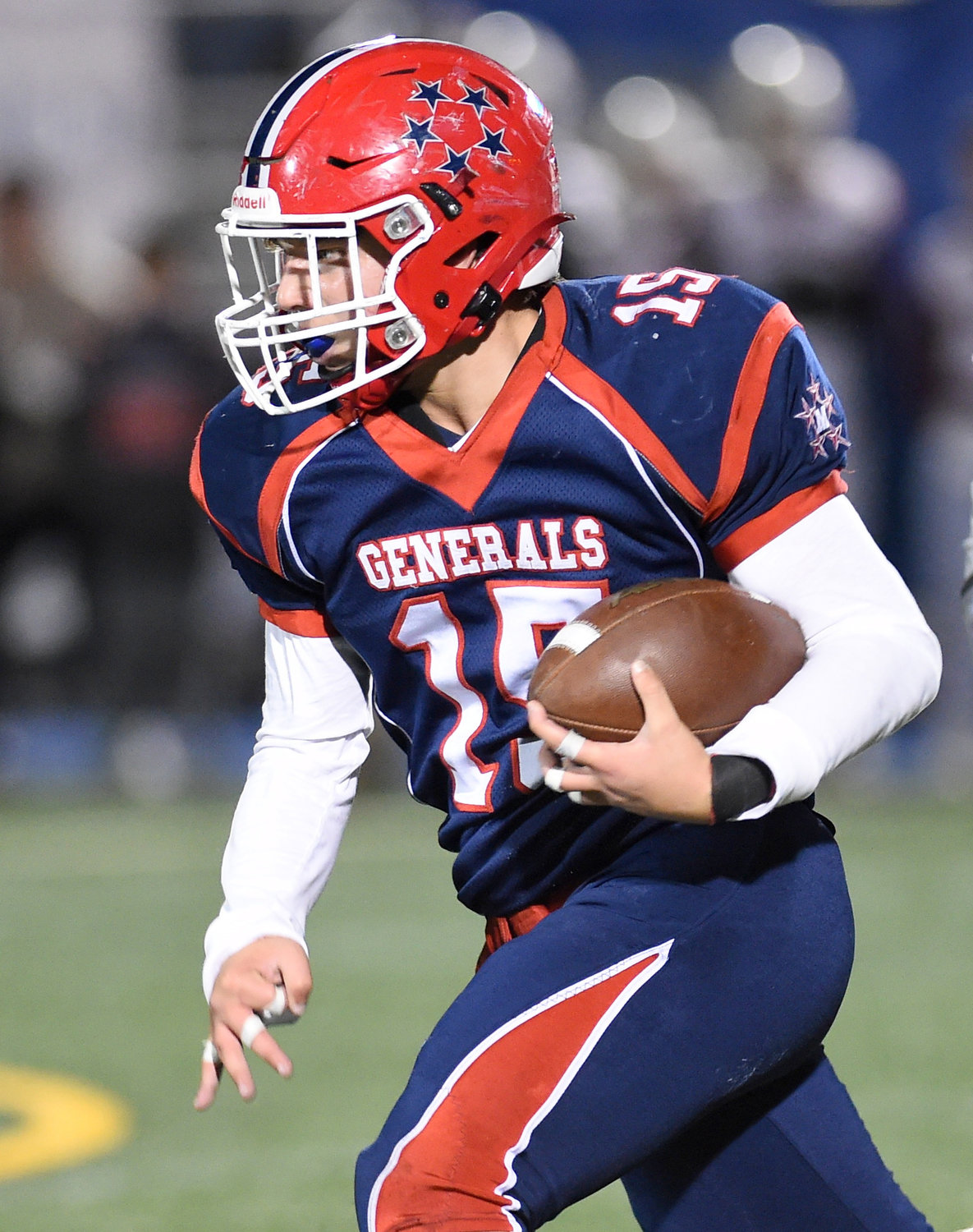 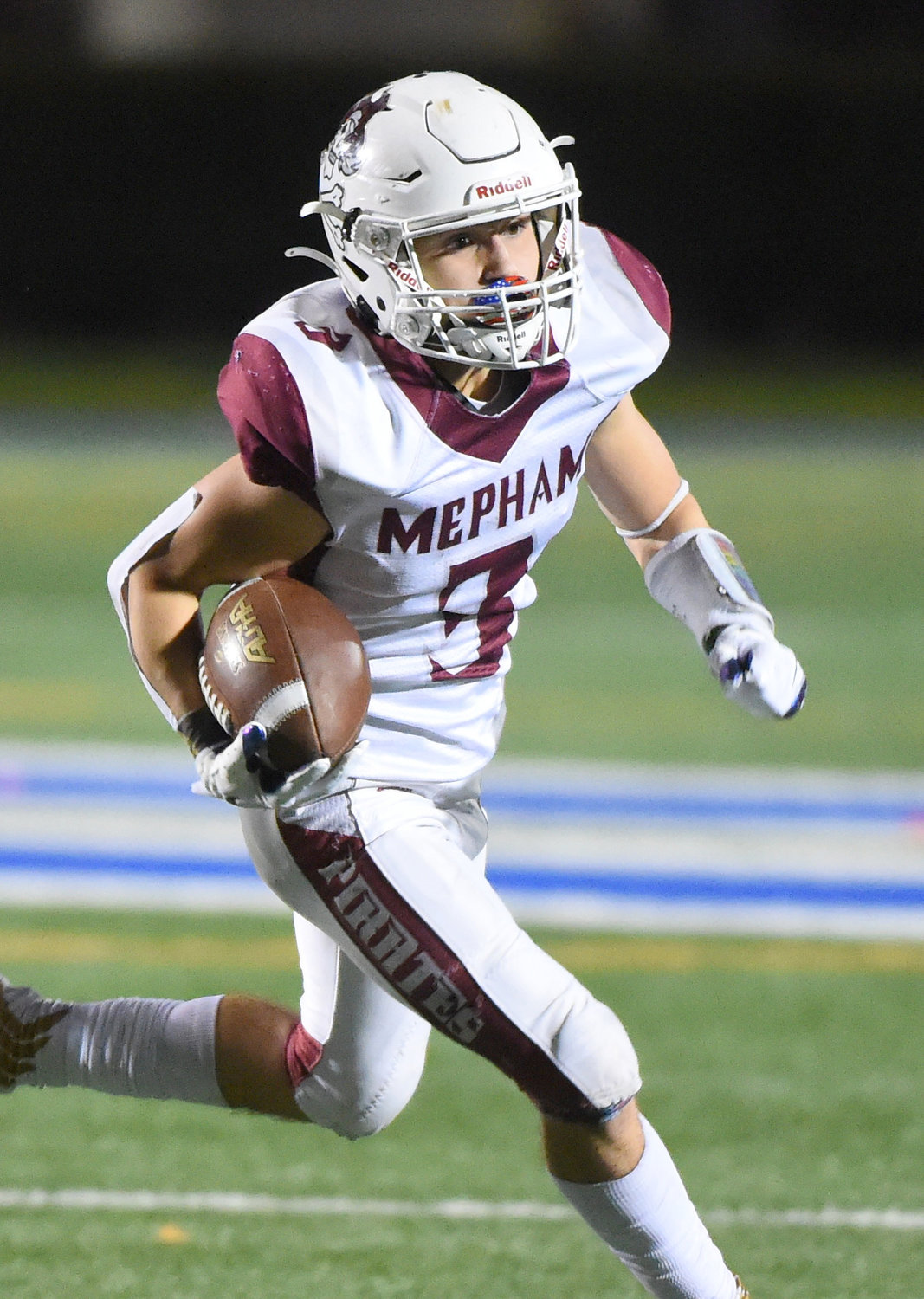 It wasn’t easy, but MacArthur will once again be playing for the county championship.
James Napoli scored his second touchdown of the game with just over two minutes left and Vincent Fundaro made two key defensive plays in the waning moments as MacArthur advanced to its third straight Nassau Conference II football title game with a 21-18 win over Mepham last Saturday night at Hofstra.
Ryan Muller rushed for 78 yards and threw for 108 for the Generals, who will again face Garden City for the county championship this Saturday at 4 p.m. MacArthur had a heartbreaking 14-7 loss to the Trojans in last season’s championship game after falling to them 16-14 in 2019.
Mepham carried an 18-13 lead into the fourth quarter and was poised to put the game away with a 1st-and-goal at the MacArthur 9 with just over nine minutes left. Pirates’ standout quarterback Nick Honerkamp gained five yards over two rushing plays and Dominic Novello was stuffed at the line of scrimmage on third down before Dylan Dunn lost five yards on a hit by MacArthur’s Matt Clarkson for the turnover.
But the Pirates got the ball back six plays later when sophomore defensive back Devin Greene intercepted a long pass at the Mepham 35 with 2:44 left. MacArthur had just one time out left and would need a big defensive stop to stay alive.


It came quickly.
On the next play, on a fake handoff, the ball popped loose. Fundaro immediately pounced on it.
“I was like, ‘Oh my God, the fumble’s right there, I gotta go get it,’’’ Fundaro recalled. “I got it and I’ve never been so happy in my life.”
On the ensuing drive, Muller darted a 26-yard pass to Matt Papach on 3rd-and-8 to the Mepham 6 before Napoli powered his way into the end zone from five yards out two plays later. A two-point conversion with 2:19 left gave the Generals a three-point lead.
Mepham didn’t go down quietly and quickly moved to ball to the MacArthur 30 on Honerkamp’s 18-yard pass to Michael Cucinella, a pass interference penalty and Ryan Thier’s three-yard reception. But on 2nd-and-7, Fundaro sacked Honerkamp for a seven-yard loss before James Hegel intercepted the next pass to seal the game.
“The tackle mis-stepped and I got the sack and I’ve never been so happy before,” Fundaro said of his sack.
MacArthur won despite being outgained 356-194, including 164-86 on the ground.
“It was a bend but don’t break at that point,” MacArthur head coach Bobby Fehrenbach said of his fourth-quarter defense. “They were moving the ball on us all game, but you only remember the end.”
Honerkamp rushed for 83 yards with a score and threw for 192. Thier had four catches for 83 yards.
“You make a mistake and against a team like that and they’re gonna make you pay,” said Mepham head coach Anthony Cracco. “We made too many mistakes tonight. I thought we made a great play on the interception, but the fumble was a killer.”