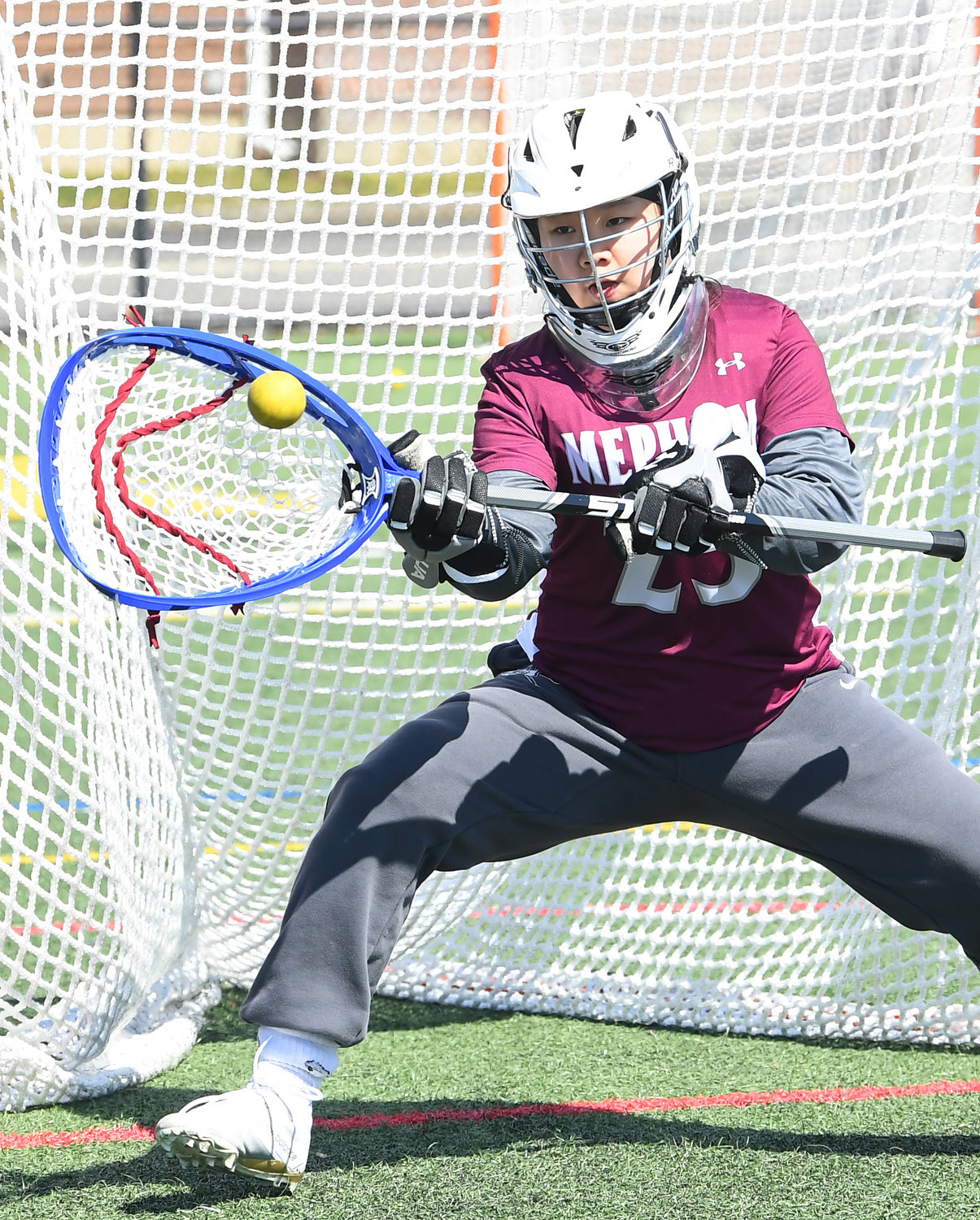 Sophomore goaltender Catherine Chow made a season-high 10 saves April 5 to help lead the Pirates in their 8-5 win over Division.
Neil Miller/Herald
By Tony Bellissimo

Bursting with young talent, Mepham has yet to experience much in the way of growing pains through five games in Nassau Conference 3 girls lacrosse and at 4-1 was locked in a first-place tie with Mineola and Floral Park.
“I was a little concerned about all the youth we had coming into the season, but everyone has stepped up,” Pirates coach Kristen Mogavero said. “We’ve been on a steady incline since the second game when some decision-making cost us against MacArthur.
“The girls are really playing together as a team and get along great,” she added.
Since falling 4-2 to MacArthur on March 30, Mepham has ripped off three straight conference victories whilst averaging 11.3 goals in the process. Mongovero was also encouraged by a non-conference defeat to Oceanside, a talented Conference 2 contender that employs the same type of defensive scheme as MacArthur.
“MacArthur and Oceanside play the type of defense that can throw a wrench into any offense, especially when it’s a young team like ours,” Mogavero said. “It was great to see us perform much better the second time we faced it.”


The Pirates responded to the MacArthur loss by defeating Hewlett, 11-4, three days later behind senior Kaitlyn Smith’s hat trick and three assists, junior Quinn Schroeder’s four goals and one assist, and senior Mia McElwee’s four assists.
Smith, a fourth-year attack, is a vocal leader and balanced playmaker with tremendous instincts, Mogavero said. Through six games, Smith found the back of the net 15 times and assisted on 10 goals. She’s also taking the majority of draws and winning them at a high rate. “Kaitlyn worked on draws a lot and has come up huge in close games,” the coach said.
Schroeder, who has 12 points including nine goals, does most of the quarterbacking from behind the cage. She netted a hat trick in a season-opening 14-3 win over Plainview. Senior Sara Forchelli is a returning starter and has chipped in three goals, and Mogavero said Sierra Barbosa (five goals), one of six freshmen on the varsity roster, has fit in nicely.
The midfield group is young and talented, led by sophomore Jenna Dempsey and freshman Grace Skulavik. Both have seven goals — Skulavik scored in each of the first six games while Dempsey scored in all four victories.
“I definitely like what I see on offense and I’ve been telling the girls to be hungry for goals,” Mogavero said. “It’s great that we’re unselfish, but sometimes we make one too many passes. We’re going to need to score more when we play Mineola and Floral Park.”
Anchoring the back row is sophomore goaltender Catherine Chow, who made a season-high 10 saves to lead an 8-5 win over Division on April 5. “She has an amazing attitude and a lot of responsibility,” Mogavero said. “She’s a quick and active goalie who not only plays every minute of every game but faces every shot in practice.”
The defense in front of Chow has been steady, led by juniors Madison Webber and Markella Moutafis, sophomores Olivia Meyer and Bella Jensen, and freshmen Gabriella and Maggie Fitzgerald, and Leah Smith