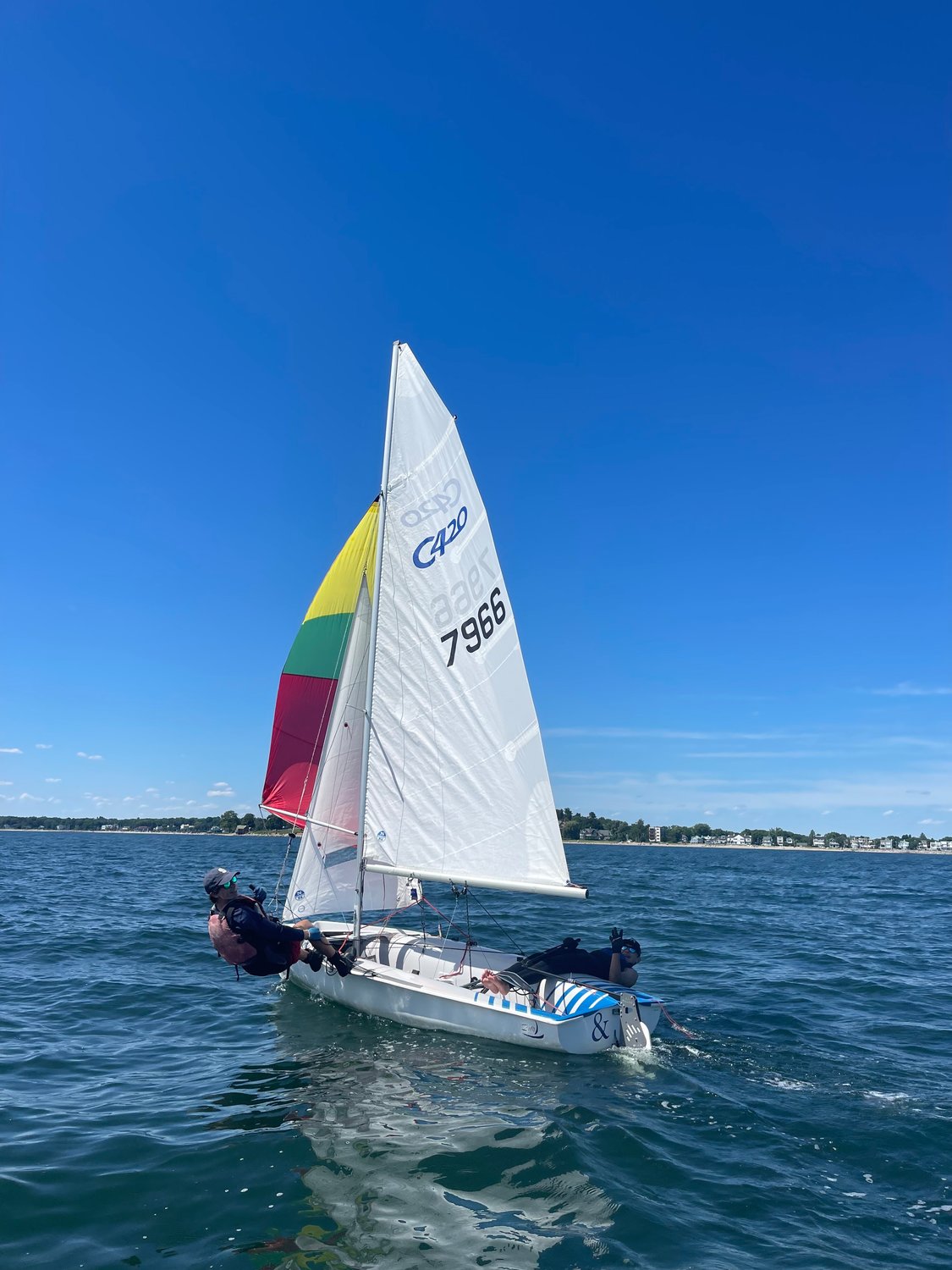 Mark Adipietro and Tucker Peters are friends who sail often in Westport, Connecticut. To improve their skills, they took an advanced sailing course at Oakcliff Sailing in Oyster Bay.
Courtesy Jody Peters 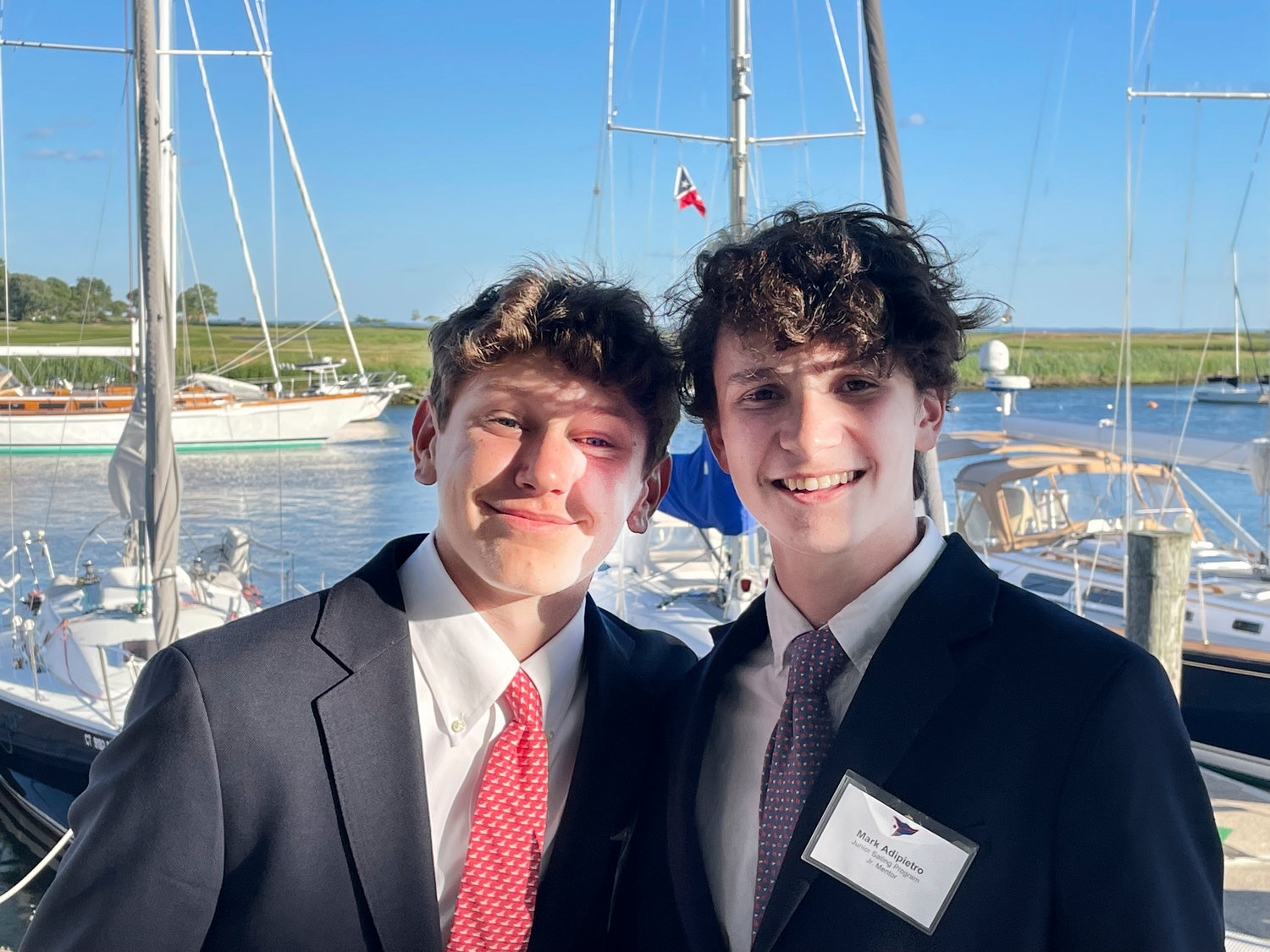 Tucker Peters, left, and Mark Adipietro are passionate about sailing. They are also close friends.
Courtesy Adipietro family
Previous Next
By Laura Lane and Will Sheeline

Mark Adipietro, 15, and Tucker Peters, 16, share a passion for sailing. After an incident at Oyster Bay’s Oakcliff Sailing Center on July 9, when Peters helped save Adipietro’s life, they have an even stronger bond.
The residents of Westport, Connecticut, are experienced sailors. Peters has been sailing for a decade, and Adipietro for eight years. Two years ago, they began going out on the water together. In July, hoping to become better sailors, they signed up for Oakcliff Sailing’s five-day advanced program.
But when they were halfway through the program something went wrong. While they were practicing a drill on a 16-foot 49erFX, a dinghy, the clip on Adipietro’s harness, which was attached to the trapeze — a wire attached to a point high on the mast — got stuck. Peters had missed the trapeze when he tried to attach himself to it.
“The boat capsized as they turned through the wind in a tack,” Dawn Riley, Oakcliff Sailing’s founder and executive director, explained. “When the boat tacks, the sails and the crew change sides. The boat is unstable until everything is settled and they’re back to going fast and straight. Dinghies capsize. They just do.”
Adipietro said he was calm, even as the boat began to capsize.


“I was hanging as the boat slowly turned over me, and I was stuck,” he recounted, adding that he managed to take one big breath before he went under. “But there wasn’t an air pocket. If there were, I could’ve taken out a knife or something to free myself.”
Peters tried to right the boat, realizing his friend was trapped underneath. “I tried to get all my gear off so I could get under the boat to help Mark, but I couldn’t get my lifejacket off,” Peters recalled. “I swam under the boat, but Mark’s lifejacket was so tight I couldn’t unhook it. Mark and I were being pulled up by our lifejackets under the boat.”
After about two minutes, Adipietro lost consciousness. Their coach, an Oakcliff employee, Dillon Whitcraft, who was training other students in the class on a boat nearby, got to the overturned boat quickly, dived in, and managed to unhook Adipietro’s lifejacket and pull him up.
Peters immediately began performing CPR on his friend. Although he isn’t certified in the lifesaving skill, he had learned it from his father, he said, and from watching videos at school.
“The most important thing my dad taught me was to stay calm and think about what you’ve learned,” Peters said. “If you panic, you can lose a life.”
And because the boys are very close, Peters, knowing Adipietro’s character, believed he could save his friend. “I knew that Mark could push really really hard,” Peters said. “Mark is a hard fighter, and I thought he would persevere.”
After Peters gave him roughly 20 chest compressions, Adipietro regained consciousness. He was taken to Huntington Hospital by bay constables. One of them was Joe Rodgers, who made it clear that, while he and his fellow constables and EMTs did everything they could to make Adipietro comfortable, it was the quick thinking of Peters and Whitcraft that saved his life.
“The real hero was the coach and his friend on the boat,” Rodgers said, “because they got him back from drowning, and we just took over and helped out from there.”
Adipietro was told there wasn’t a lot of water in his lungs, but he did have some inflammation. As a result — and because Huntington Hospital doesn’t have a pediatrics department — he was airlifted to Cohen Children’s Medical Center in New Hyde Park. He was kept under observation for 24 hours, and then released.
Some people were calling Peters a hero, which made him uncomfortable. “I don’t see myself as a hero,” he said. “Mark’s one of my best friends. It was me trying to help. I feel what I did was what anyone would have done.”
“It was a day you never expect to happen,” Whitcraft wrote in an email. “While the outcome was positive, I would like to highlight that we should all be striving to do more to promote safety every time we go out on the water.”
Adipietro texted Peters the next day. “I was like, I owe you my life,” he said. “He was like, ‘Well, you did stuff too. You took that breath, so I guess it was a group effort.’ Taking that breath — I wasn’t thinking of anything. It was just instinct. I remember all of it.”
Jody Peters, Tucker’s mother, said her son has a passion for sailing. As soon as his friend was cleared, she said, they were back on the water.
“The grit, gusto and grace of the sailor — there’s something about the sport, something really unique and beautiful,” Jody said. “They were not beginner sailors, and were ready for this program. Their skill level and experience were there. What happened is just par for the course.”
Riley said that every time there’s an incident, a report is filed, and she looks to see what can be improved. “We now have knives on site that can be checked out,” she said. “It adds a level of safety.”
Adipietro described sailing as an opportunity to meet people, as well as a way to challenge himself by manning the “fastest, scariest boat” he can find. Peters said that sailing is different than other sports because no one can plan ahead.
“You have to be on your toes, which is really exciting,” he said. “And you have to rely on external factors like the wind, the current and tide. You have to take everything into consideration.”
Report an inappropriate comment