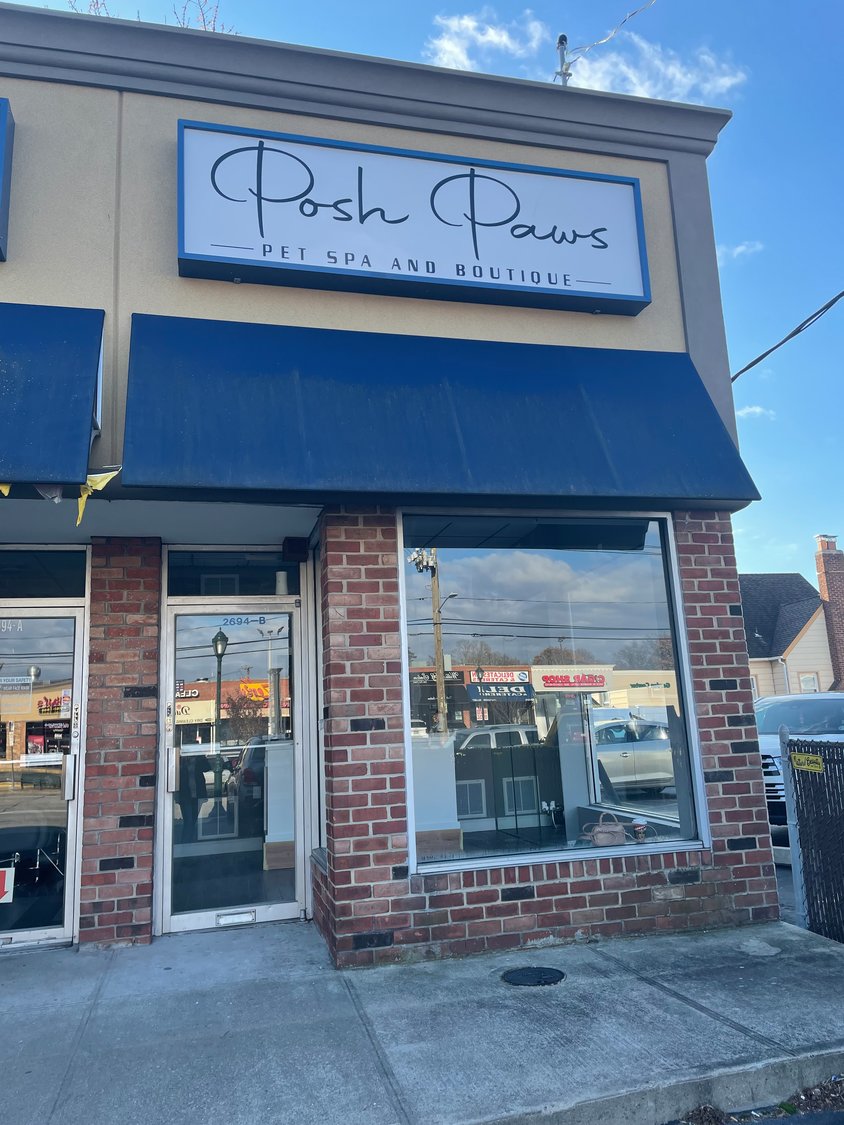 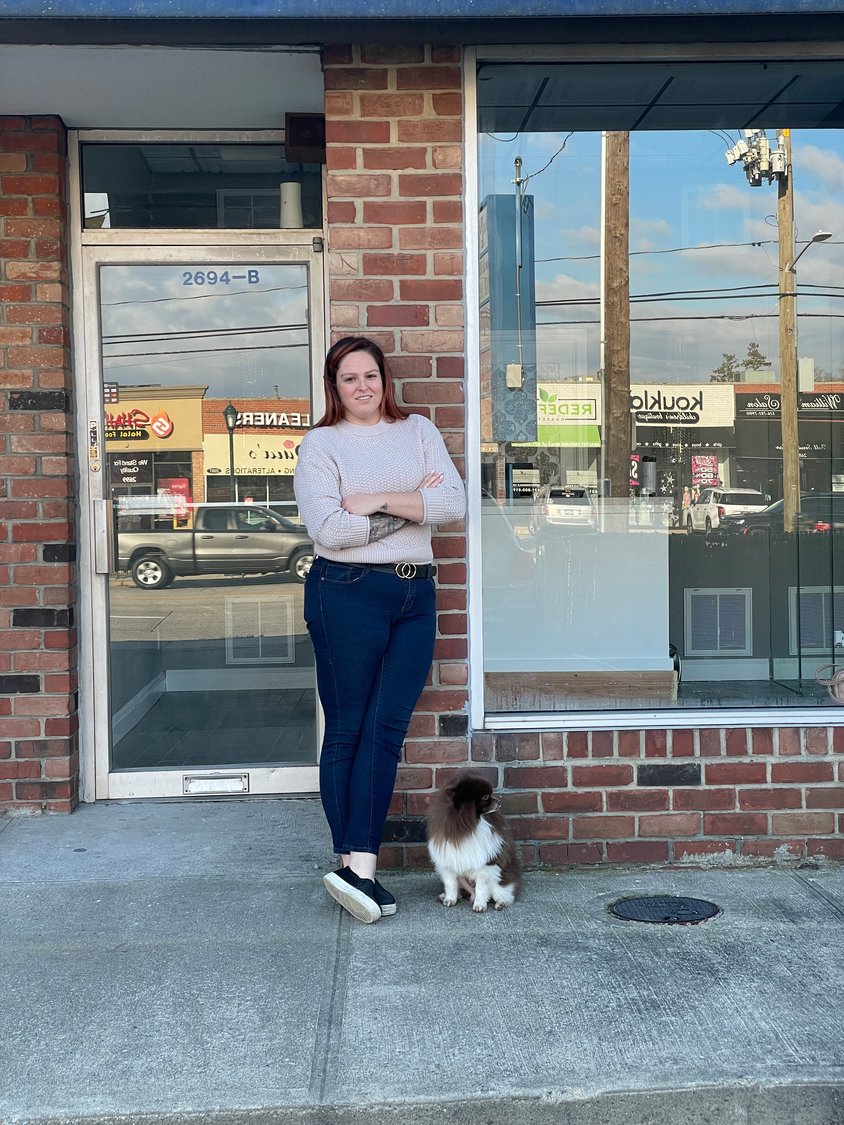 Owner Shelby Grillo outside of her store with her dog, Capone.
Jordan Vallone/Herald
Previous Next
By Jordan Vallone

Dog-lovers in Bellmore and Merrick will be excited to hear that a new pet-grooming salon has opened on Merrick Road in Bellmore. Owned and operated by Shelby Grillo, who is originally from North Babylon, the salon will soon be open seven days a week, starting on Dec. 6.

Grillo, 30, moved to North Carolina when she was 16, where she finished high school and attended college as a criminal justice, sociology and business major. Planning on heading to law school, Grillo shared that she got into a bad car accident the week before graduating.

“I took some time off — did some travelling,” she explained.

During that time, she started caring for her first dog, Capone, who required grooming. Deciding that she wanted to do her own grooming, Grillo soon realized that this was a career path she now wanted to pursue.

While pet groomers in New York State do not need a license, there are certain steps that one must take in order to become one.

“There’s a couple of different options,” Grillo said. “You can work under an apprentice, to go enroll in a grooming academy. Or, you can work at Petsmart as a bather and they’ll send you to their grooming academy. Not only do they pay you to bathe [dogs], they teach you how to work with them and talk to customers.”

After the month-long grooming academy, groomers are then required to work for at least two years with Petsmart, before they can take their skills elsewhere.

“I learned a lot from working with Petco — a lot about dogs and working with people,” Grillo said. “When I moved to Saratoga, I decided to go private. It is a very different environment.”

Grillo said she moved back to Long Island when Covid-19 started, and became the head groomer at a pet store in Huntington called Fetch.

“I started off at corporate and it was very beneficial to me — once I went to a few private salons, I decided it was time to open one for myself,” she added.

Having looked at a few locations for her salon, Grillo ultimately decided on Bellmore for a few reasons.

Aside from her experience as a groomer, Grillo also has experience as a veterinary technician, a role that allowed her further work with animals at a vet’s office in East Islip.

“I am a vet tech because it really allows me to get a better hand or idea of a medical things that may come up through grooming,” she said. “It really lets me see the medical backside — to be a little more educated. However, it is extremely important for people to know that as a groomer, I am not a vet.”

As for her facility in Bellmore, she soon will be open every day of the week, though exact times are still to be determined. Though she is currently the only groomer, she said she plans to take on a bather and to ultimately expand the facility to have 2 or 3 groomers.

At some grooming salons, clients can drop off their dog for a few hours and later return to pick them up.

“I couldn’t imagine leaving my dog anywhere for an extended period of time,” she said. “It inspired me to be a groomer. I want to specialize on 1-on-1 grooming, meaning your dog is the only one getting groomed at that time.”

With that being said, as she expands in the future, she added she plans on having bathers and groomers working in teams, so while a bather preps one dog, a groomer could be working on another. Additionally, Grillo does have kennel space in the salon.

“My kennel space in the back is simply because I do have clients that prefer to drop off and leave their dog here because they have things to do throughout the day,” she said. “The kennel space is also really for safety, because if I had a dog booked and the owner wasn’t here in time, and I had another dog coming in that I knew was aggressive — I can’t have the first dog walking around. So, it is for safety purposes.”

Overall, Grillo’s salon is meant to be convenient for all clients — whether they choose to leave their dog at the salon or not.

“I understand that I have clients that either can’t or don’t want to groom their own dogs,” she said. “I wanted to provide somewhere that not only can they trust me, but I don’t want their pet to be here any longer than need be.”