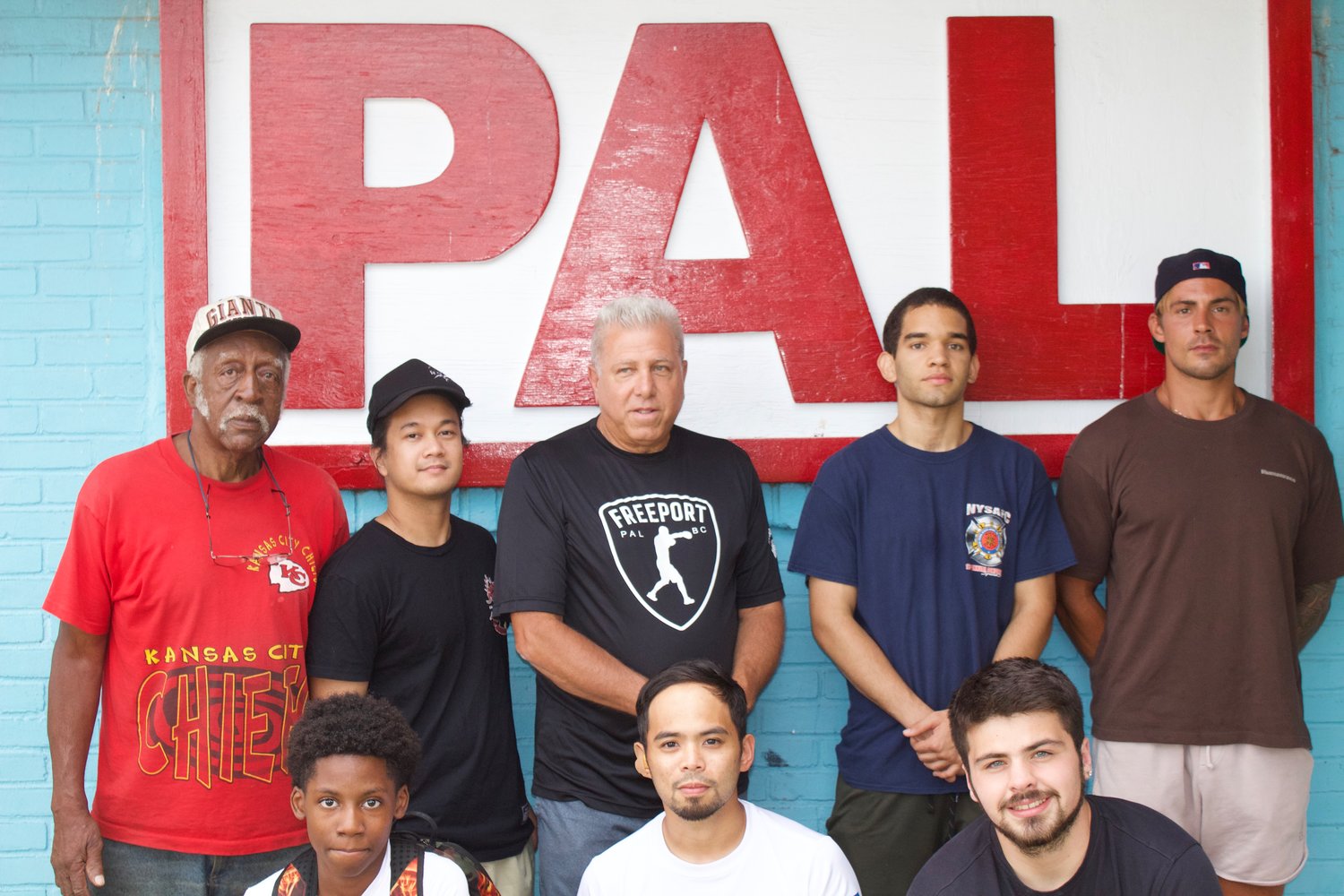 Coach Sal Giovanniello, his co-instuctors, and students are under the auspices of the Police Athletic League.
Mohamed Farghaly/Herald 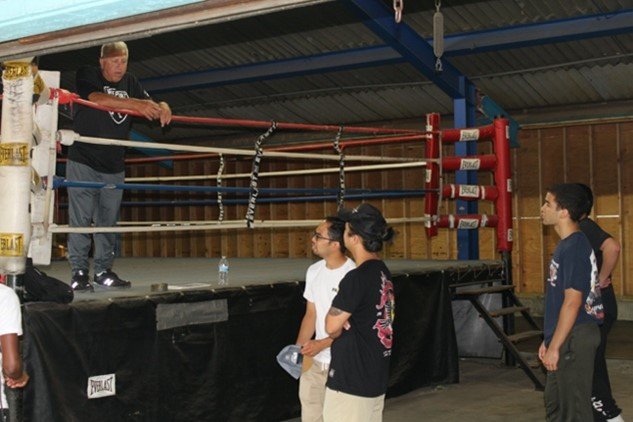 Giovanniello with his young boxing students, above left.
Mohamed Farghaly/Herald 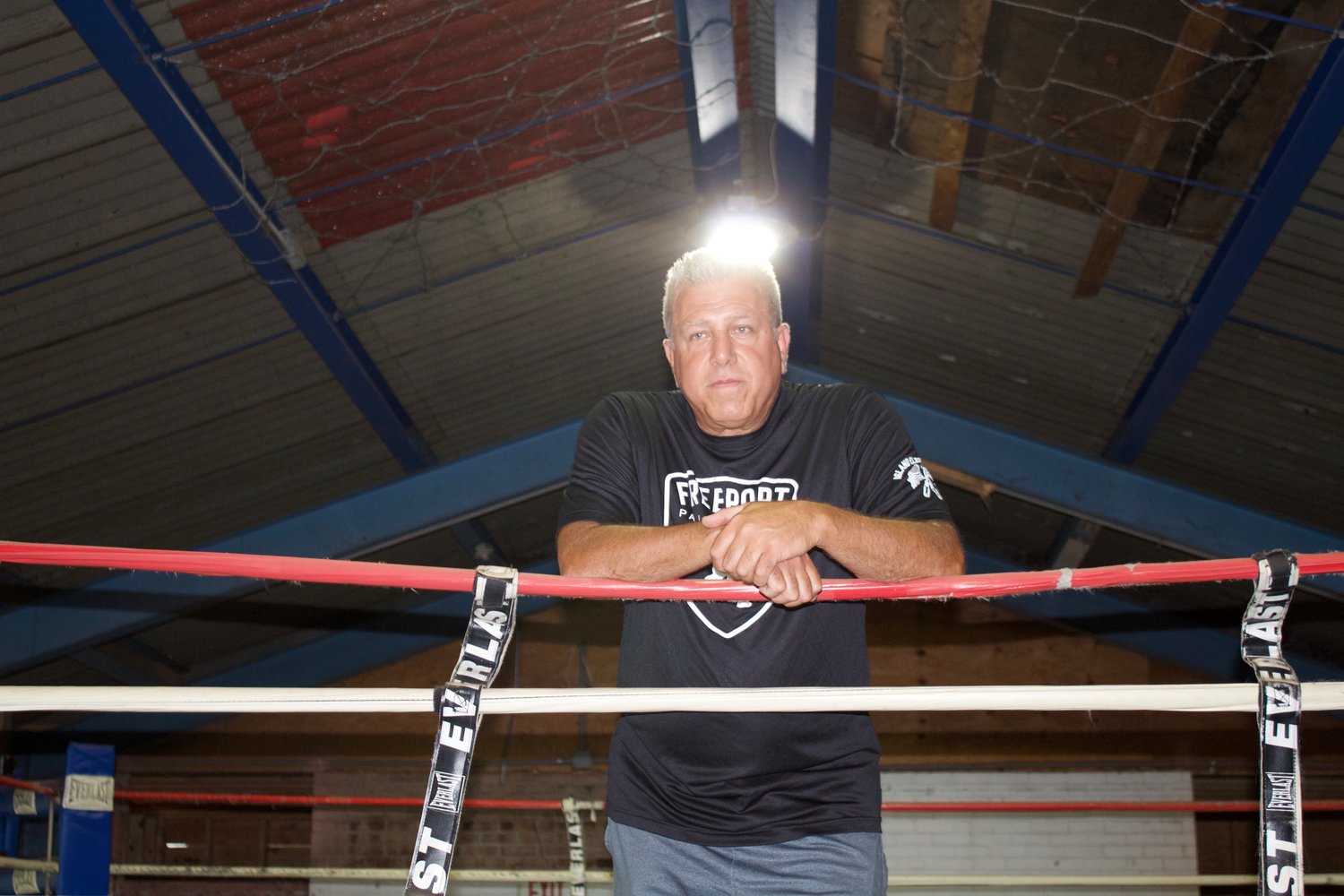 The well-stocked gym has barely enough space for its weight room, exercise area, boxing ring and locker room. It has no restrooms, so its regular visitors use the restrooms in a small park building nearby.

The area is being enlarged to outfit the facility with a new, cutting-edge weight room, a new locker room, showers and restrooms.

Coach Sal Giovanniello took over the gym following the retirement of longtime coach Joe Higgins, who founded it over 25 years ago. “We’ve had multiple champions that came up through this gym,” Giovannielo said, “and we plan on continuing that when the gym gets renovated and we get our kids back. We’re shooting for the top again. No question about it.”

Giovanniello said the renovation will not reduce any open area of the park, but instead will occupy small vacant grass sections directly around the gym.

Inspired by his father, who was a coach in the Huntington area, Giovanniello pursued coaching after his amateur boxing career ended. He started a family and moved to Freeport, where he discovered the gym that Joe Higgins inspired.

The gym’s renovation is in honor of Freeport native and professional boxer Patrick Day, who died October 16, 2019, at the age of 27 from a brain injury sustained while competing. Day is recognized as much for his personal kindness as for his boxing prowess.

Covid-19 and its consequent closues nearly knocked out the PAL boxing gym. “The pandemic destroyed us pretty much,” Coach Sal said. The PAL gym boxers were competing in a tournament at the Freeport recreation center in March 2020 with victory in their sights when their events began getting canceled.

The pandemic disrupted training for gym members, some of whom stopped boxing entirely and never returned. Giovanniello is optimistic that the new construction will make the gym memberships even better than before.

Anyone 13 and older, who can present a report card with high grades, can join and train at the gym and will be exempt from paying the membership fees.

Cameron Douglas, a 13-year-old gym member and Freeport resident, commended the gym’s report card policy. “It’s good grades first around here,” he said, “Then you become an athlete. Without good grades, you can’t do any of that.”

Giovaniello’s goal is to teach his students much more than boxing skills. He wants them to learn life lessons that will aid them outside of the gym.

“When the kids get out of high school, we don’t want them just sitting around and coming to the gym.’” Giovaniello said. “This is a place where you come in and you continue to grow. It’s absolutely community-based.”

Giovaniello uses his Freeport connections to assist gym members after high school. He tries to locate jobs for them, depending on their interests, through his contacts with several unions.

“This gym means a lot to me. It kept me out of a lot of trouble over the years,” said Danny Angel, a 32-year-old Freeport PAL member. “I used to come here consistently to stay away from drinking and any trouble outside of the gym.”

George Oliphant, creator and star of the popular NBC home-improvement show “George to the Rescue,” is to be thanked for spearheading the renovation. His series works with local communities to assist in enhancing their quality of life by undertaking extensive makeovers.

Donors paid for everything involved in redoing the gym, from the framing to the roofing, as well as the new athletic equipment.

“We have the village all behind us,” Giovaniello said. “Mayor Kennedy, Legislator Debra Mulé, the village parks department and the Freeport PAL president Bobby Ford, are all helping us out, letting us do whatever we can to get this gym back and running.”

The gym’s construction began in early June with scheduled completion before the end of the summer.