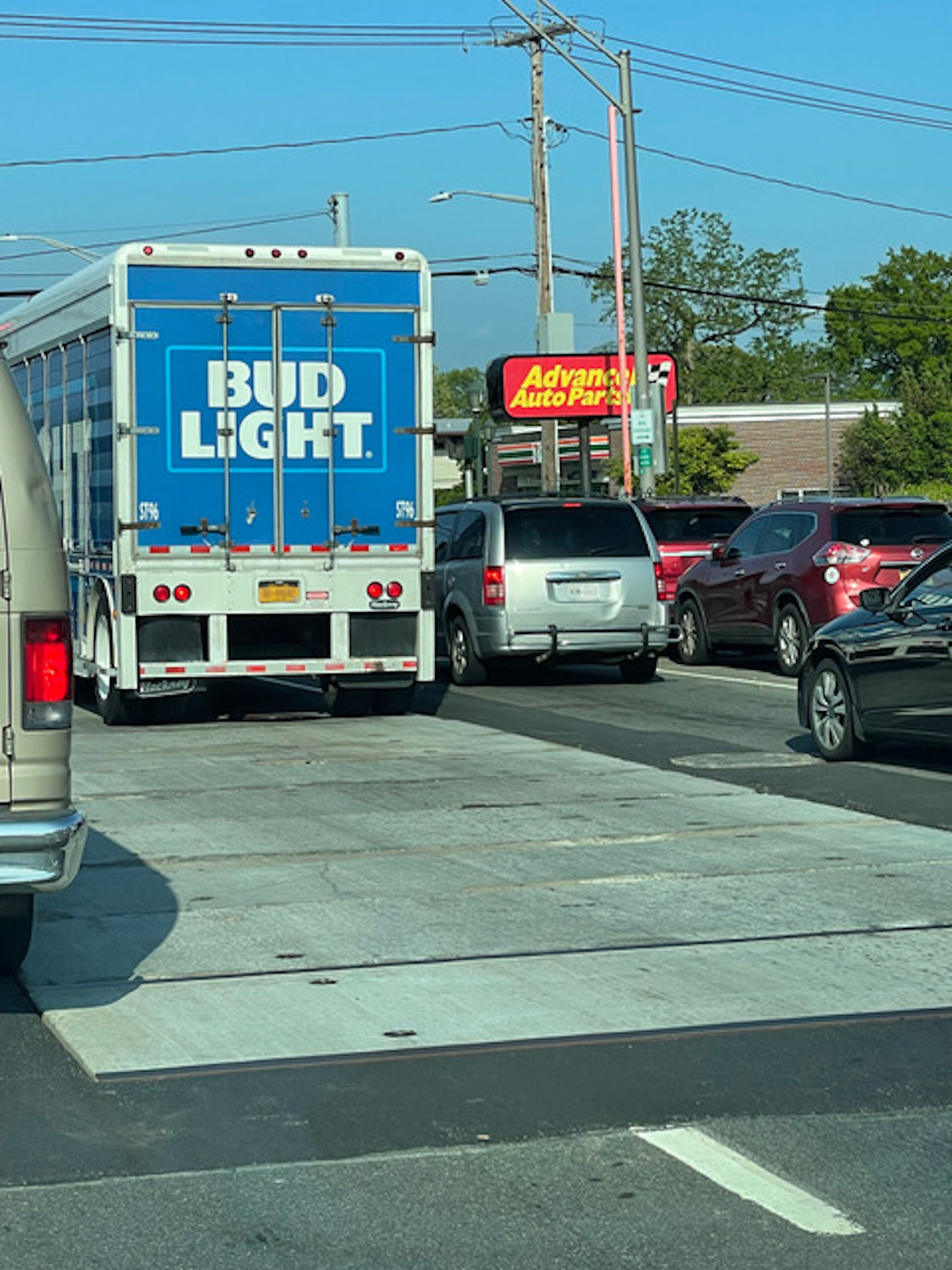 Residences and businesses along Sunrise Highway, where work on the Bay Park Conveyance Project is ongoing, are dealing with intense vibrations in their homes and shops due to truck traffic over the large plates used to cover construction pits.
Jordan Vallone/Herald
By Kepherd Daniel

With construction well under way on the Bay Park Conveyance Project — a massive effort to improve water quality and storm resiliency across Nassau County — some residents are pleading for a solution to the problem of excessive noise caused by the construction.

Work on the project started in Merrick, and residents of the Merrick Manor Townhouses, on Sunrise Highway, have complained about the noise and vibrations. The Manor sits right beside one of 24 pits being excavated so construction workers can work underground, installing a new pipe through an existing aqueduct that extends from Bay Park, in East Rockaway, east under Sunrise Highway to the Cedar Creek Wastewater Treatment Plant in Wantagh. Treated wastewater will be piped three miles out into the Atlantic Ocean where it will be diluted, instead of negatively affecting the bays.

Large plates cover the pits, and when work is not being done during the day, the problem for residents is the large trucks that rumble noisily over the plates, sending vibrations through nearby homes and businesses.

The South Merrick Community Civic Association gathered for its monthly meeting on May 25, and the hot topic was what could be done about the tremors. Residents who attended said they fully supported the Bay Park project, but are seeking some way to reduce the noise and vibrations.

“We are all in support of this project, but we feel it cannot be at the expense of some of us,” Manor resident Greg Parisi said. “The construction workers are working from 9:30 p.m. and they leave at 6 a.m. There is no sleep, but the work has to be done. Some of us would like to try to sleep during the day, but we can’t because the pit has eight concrete plates on top of it, and the big trucks that are speeding through the middle lane are causing critical vibrations.”

A representative of the Bay Park Conveyance Project Outreach Program, Travis Brennan, detailed how long residents would have to deal with the noise and shaking. “At the absolute worst-case scenario, we’ll be done by the first or second week in July,” Brennan said. “We’re working heavily with the state to try and accelerate the testing that needs to take place so that we’re done by the end of June.”

Residents acknowledged that project officials had done everything they could to remediate the situation, by using rubber gaskets and new plates to reduce the nose, but it remains a nuisance. “They have tried with the rubber seals,” said attendee Linda Carter, “but we’ve been hearing this for months and months and months.”

“It’s so frustrating, because it feels like there are earthquakes all day long in our units,” added Manor resident Sheila Temchin. “And I don’t understand how they’re saying that there can’t be any damage going forward.”

Many at the meeting said the solution would be to direct large trucks to Sunrise Highway’s far-right lane, so they wouldn’t drive over the pits, which are in the middle lanes of the roadway, a resolution that would be up to the State Department of Transportation.

“We’re told that the New York State Department of Transportation won’t allow a sign in about a 49-foot stretch to have trucks move to the right,” Parisi said. “We can’t even get a sign that says 10 or 15 miles per hour in a work zone for a quarter-mile stretch. When these trucks come barreling down, many of them are going 60, 70, or 80 miles per hour down that middle lane and create the seismic vibration.

“We didn’t move to California,” Parisi added. “We don’t live on the fault line, and for four months this is what we’ve dealt with.”

Michael Reid, State Sen. John Brooks’s chief of staff, was in attendance and let those at the meeting know that Brooks was trying to resolve the issue. “The project engineer did request specific traffic, radio patterns and speed reductions that went through, but the Department of Transportation declined the request,” Reid said. “We have all levels of government working together, and we’re going to get this done as quickly as possible.”

Brennan said he anticipated the entire project to be completed in October or November 2023.

Merrick is the first area that is having pipes installed underground as a part of the project. Other business or close residential areas by Sunrise Highway in towns such as Bellmore, Wantagh, Seaford and Baldwin may have to deal with the rumbling as the project continues.

“We’re probably going to help other communities who are going to go through this,” Parisi noted. “There are about five other pits near homes all along Wantagh, Seaford and Baldwin. They’re going to have their hands full if they don’t fix this. We’re the closest ones — but not the only ones.”