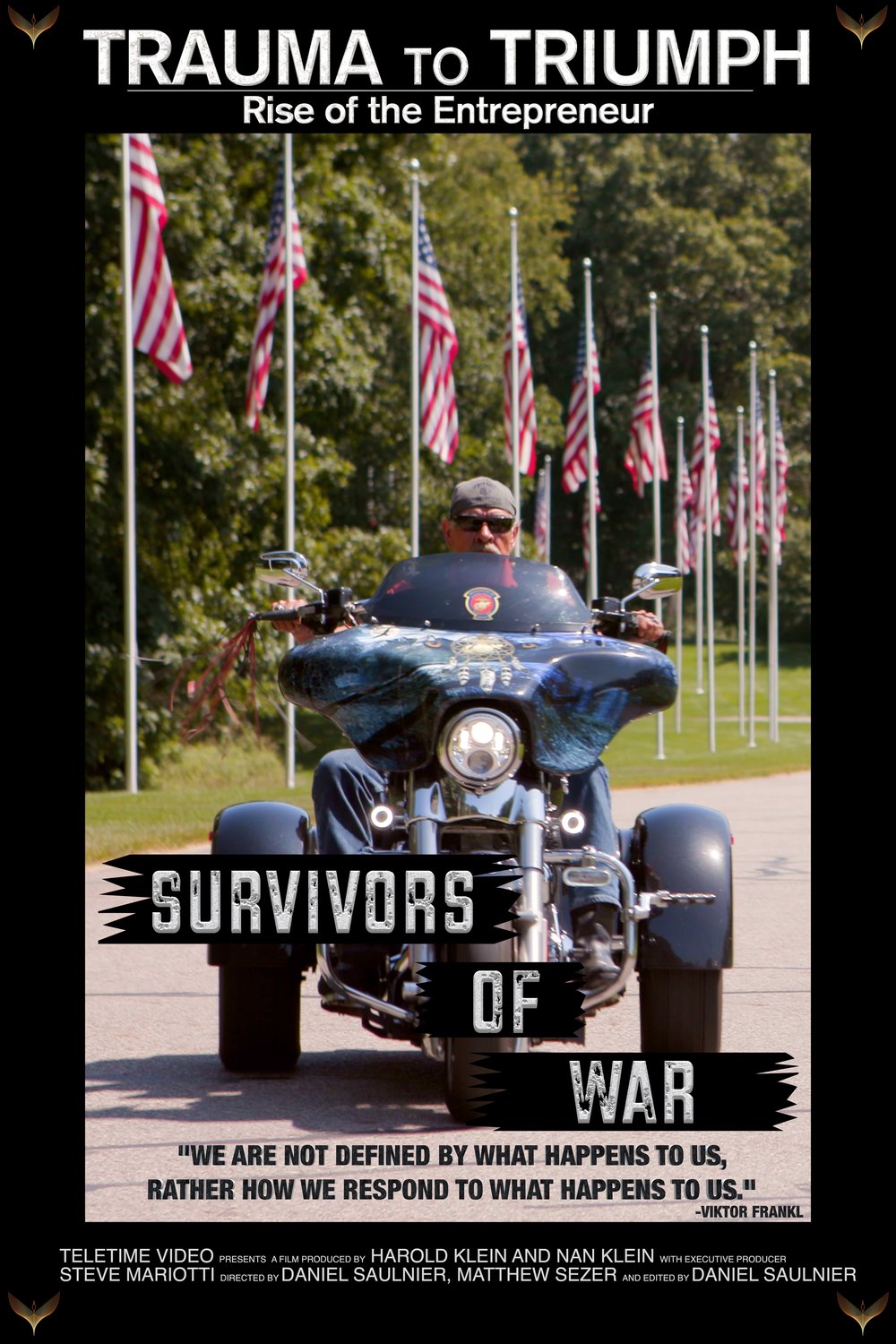 The promotional poster for the documentary series “Trauma to Triumph – The Rise of the Entrepreneur.”
Courtesy TeleTime Video Production
By Jeff Bessen

A husband-and-wife team who live in Woodsburgh and own a business in Lynbrook spearheaded the production of a new documentary series that will have its New York premiere, and an accompanying panel discussion, on Sunday at the 92nd Street Y in Manhattan.

Nan and Harold Klein, 65 and 66, started TeleTime Video Production in 1976, when both were attending Brooklyn College. “There was no such thing as video,” Harold recalled, and Nan added, “Not even VHS” — the video home systems that became ubiquitous in households in the 1980s.

The documentary series “Trauma to Triumph – The Rise of the Entrepreneur” has two episodes completed, and next month they will be broadcast on PBS’s World channel. The series focuses on people who have faced difficult circumstances and then succeeded as entrepreneurs.

“We did a lot of work with entrepreneurial community,” said Harold Klein, recalling TeleTime’s first use of video in stores, which helped them show their merchandise continuously in their front windows, which led to more work for TeleTme in malls and store chains, then corporate work with the founder of Inc. magazine, Bernie Goldhirsch. TeleTime produced 100 educational videos on entrepreneurship for Inc., which in turn led to other work for companies such as AT&T and Dell.

Klein has had an entrepreneurial spirit since he was young: At 17, he was named head of camp at a summer job at the Rocking Horse Ranch in upstate Highland, where he designed all of the programs and managed 16 counselors overseeing more than 120 children per week.

As TeleTime broke new ground in the video field, Nan Givner, then not yet married to Harold, took on the male-dominated banking industry and earned multiple promotions at the Federal Reserve Bank of New York, then worked at Manufacturers Hanover Trust Co.

A few years later she joined Harold full-time at TeleTime, which is certified by the Women’s Business Enterprise National Council and New York state as a woman-owned business.

“Entrepreneurship could make things better for communities and countries, and could equal the playing field,” Nan said. “It’s an opportunity to move forward, and for people to get out of their [negative] situation.”

About three years ago, the Kleins began the research for their latest project after a longtime friend, Steve Mariotti, brought the idea to them.

Over some three decades, the Kleins have collaborated with Mariotti, who is the executive producer of the documentary series.

Thirty years ago, Mariotti, who was teaching in New York City, used one of TeleTime’s entrepreneurship videos, and wrote the Kleins what he called a “fan letter.”

What he had started with the entrepreneur series needed organization. “They were the right people to get this done,” said Mariotti. “I can’t thank them enough. Without them this would have never gotten completed.”

To find story subjects, Harold scoured local papers and other sources. “We were looking for entrepreneurs who had a tumultuous experience starting their own business,” Nan said.

Holocaust survivor Sam Solarz, who lived in Hollis Hills, Queens, founded a meat wholesale company, called Meat Purveyors, in the Hunts Point section of the Bronx after first getting work cutting meat when he arrived in New York after World War II.

As what became a $100 million company grew, Solarz was threatened by the Mafia. “He took out a machete and chased them out of the factory,” Harold said, adding that the gangsters came to respect Solarz.

Alcoholism, post-traumatic stress disorder and other issues led William Vandergriff, a Native American who volunteered to serve in Vietnam and was a Marine, to build a casket for his own burial five years ago, according to a story in the Battle Creek (Mich.) Enquirer that Harold found. Vandergriff started a company called The End LLC in 2019. “He launched his business engrossing himself in the artwork,” Nan said. “The caskets are gorgeous art.”

Daniel Saulnier got involved with the project two years ago, and became creative director. He had done a few short documentaries, and the Kleins contacted him, looking for a director, he said.

Matthew Sezer is also credited as a director and Saulnier is the editor. The documentary series “takes a stance and shows how we’re helping people come out of trauma,” Saulnier said. “It shows how those things make you better and not worse.”

Production of “Trauma to Triumph – The Rise of the Entrepreneur” is continuing, as interviews with more story subjects have been scheduled and additional money is being raised, the Kleins said.

On Sunday, at 5 p.m., the 92nd Street Y hosts the New York debut of the series, and a panel discussion afterward moderated by Eric Schurenberg, CEO of Mansueto Ventures/Inc. and Fast Company Media, with therapist Tova Friedman, the youngest Auschwitz survivor; Solarz’s son, Mark, VP of the company his father built; Nancy Preston, a West Point graduate who served in Iraq and Loree Sutton, who served as a brigadier general in the Army and was the highest-ranking psychiatrist. Sutton is a former commissioner of the city’s Department of Veterans Services.

For in-person tickets or the streaming link, go to https://www.92y.org/event/trauma-to-triumph.