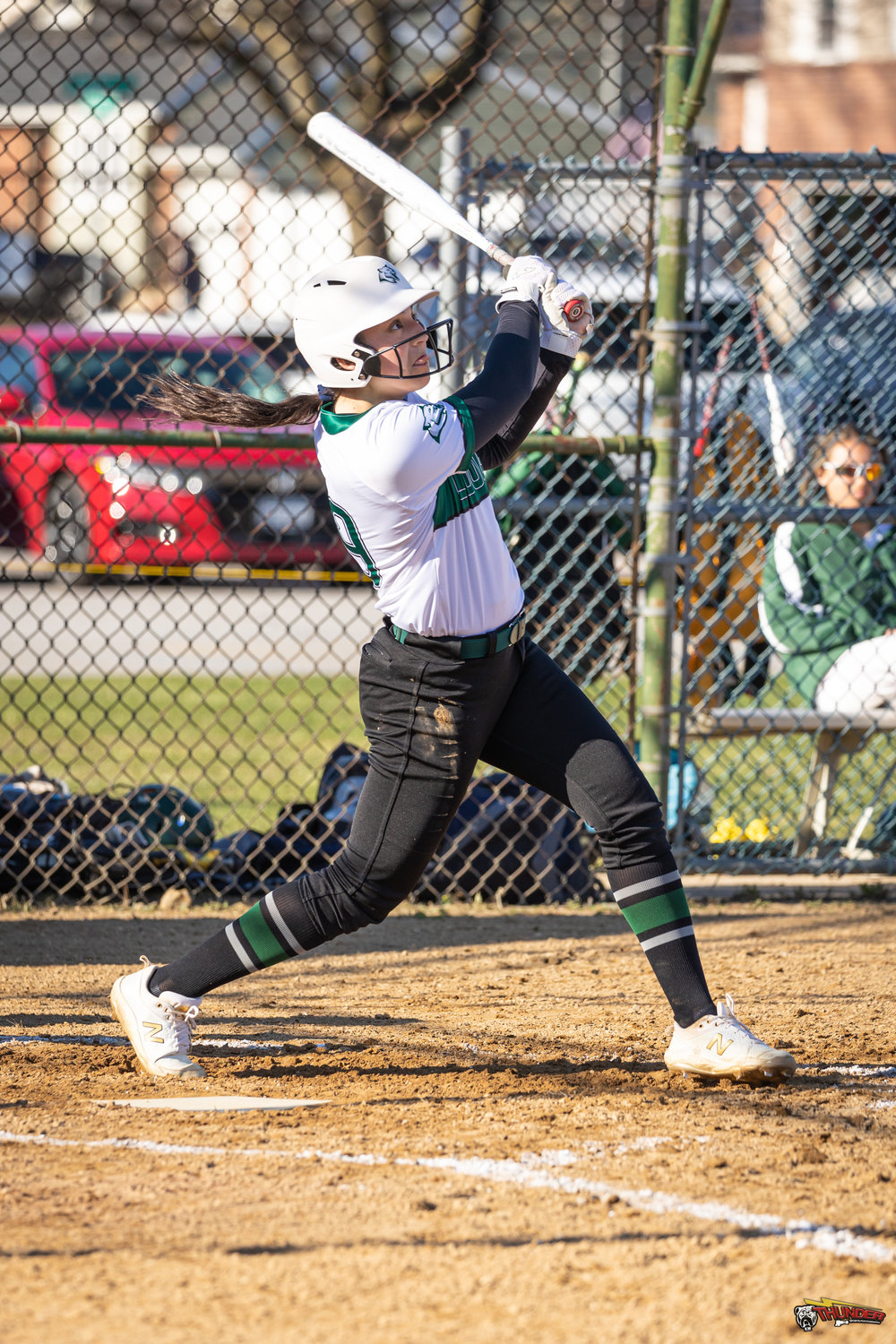 Junior Sami Levine not only anchors the Cougars’ pitching staff but she’s also a key contributor at the plate.
Karen Millindorf/Herald
By Andrew Coen

A Kennedy softball team full of youth is looking to grow into a championship contender this spring.

The Cougars entered the week at 4-2 in a league play tackling a challenging schedule in Conference II with largely underclassmen and only one senior. After a 3-0 start, the Cougars dropped two closely- contested games to Seaford and Hicksville before knocking off Clarke in a come-from-behind 4-2 win capped by an RBI triple from junior shortstop Gianna Costaro.

“Every game is a teaching moment, especially for the younger kids,” said sixth-year Kennedy coach Krista Thorn. “I expect to compete every single game and I expect to teach and learn every single game because by the end of the season it is going to come around very nicely.”

Thorn, a former standout college softball player at Hofstra, designated four of her upperclassmen as captains in senior left fielder Lara Indich, junior pitcher Sami Levine, junior right fielder Paige Lipman and Costaro. The veterans were all on the 2019 Kennedy team that reached the Class A quarterfinals

“They are really good role models who come to practice with very good attitudes,” Thorn said. “They are the backbone of the team.”

Levine anchors the pitching staff after a solid sophomore season in which she tossed a no-hitter in Kennedy’s 13-1 win against Lynbrook in the first round of the playoffs. The ace, who recorded 11 strikeouts in the Clarke win, will be counted on even more this season with sophomore pitcher Riley Thayer sidelined by injury for the early part of the season.

Eighth grader Kayla Indich will also contribute in the pitching circle. Fellow eighth grader Paige Seltzer guides the pitching staff as starting catcher and is making strides in her first season on varsity.

Costaro provides stability in the middle infield while also being an offensive threat batting over .600. Sophomore second baseman Olivia Toto adds solid defense to the right side of the infield and is a threat on the base paths with her speed. Eighth grader Katie Thayer patrols third base.

Sophomore center fielder Jamie Pellegrino leads the outfield with Indich and Lipman. She registered two hits in Kennedy’s 5-4 win against Plainedge on April 2.

After hosting Syosset Wednesday, the Cougars return home Friday to face cross-town rival Calhoun at 4:30 p.m. Kennedy then hits the road for two key games next week at Plainedge and Long Beach before facing Clarke at home on April 30 at 10 a.m.

While Kennedy is assured of a postseason berth, Thorn is hoping for a big regular season finish to earn as high a seed as possible for the Class A playoffs. Thorn said with enough growth throughout the regular season, the Cougars could be positioned for a deep postseason run.