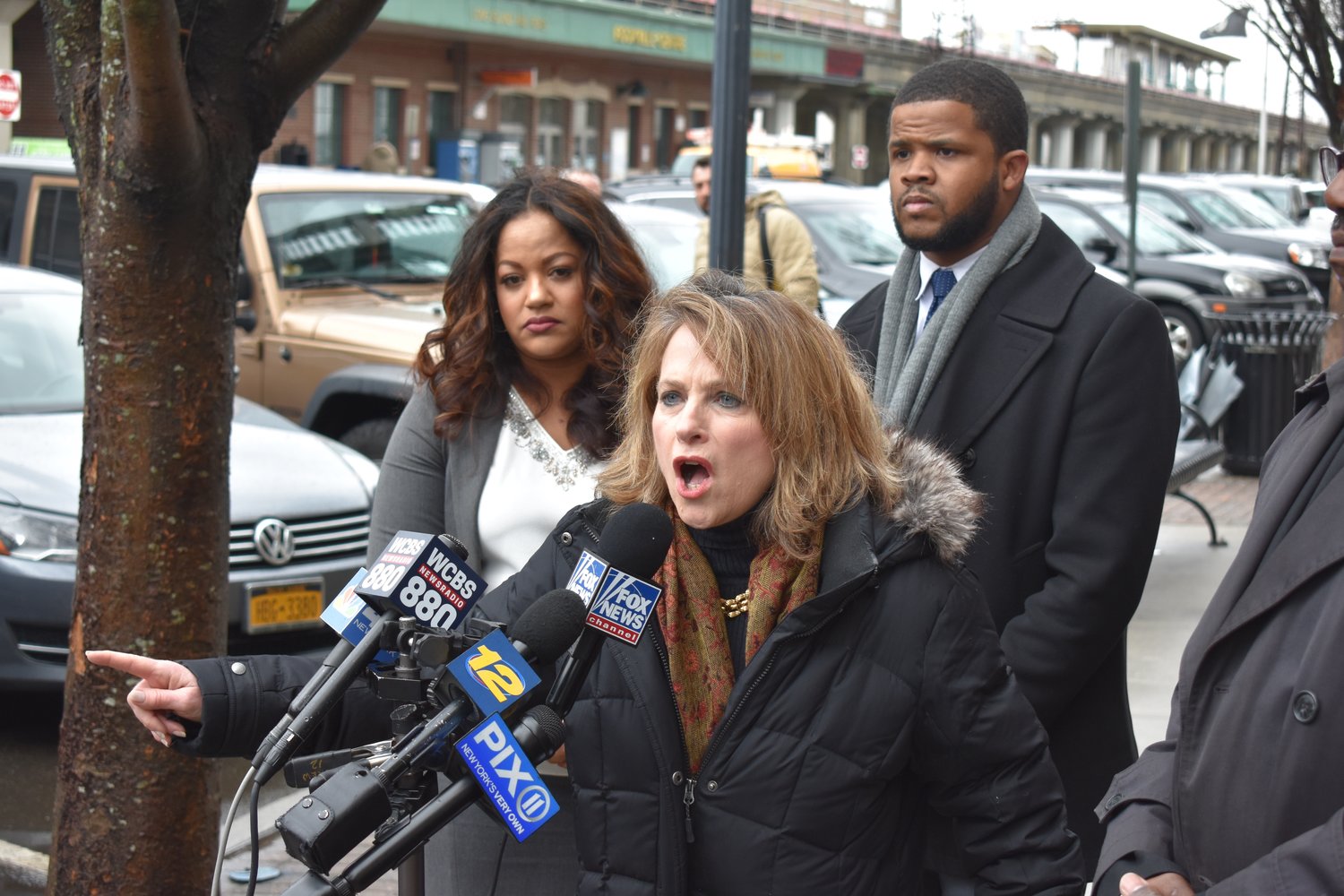 A week before the April 1 deadline to finalize the state budget, elected officials joined concerned citizens in an effort to slow down the potential legalization of recreational marijuana in New York.

Smart Approaches to Marijuana, or SAM, hosted the March 22 news conference on Front Street in Rockville Centre. The alliance of organizations and professionals is dedicated to a health-first approach to marijuana policy, and seek “a middle road between incarceration and legalization,” according to SAM’s website.

“Let’s slow this train down,” said Abu Edwards, SAM’s director of state affairs. “Let’s sit at the table and let’s have important conversation about the legalization of recreational marijuana in New York.”

Though Gov. Andrew Cuomo proposed earlier this year to legalize and tax recreational marijuana, Assemblywoman Judy Griffin, a Democrat from Rockville Centre, said at the news conference that the measure was presently out of the state budget. “I don’t know if that’s going to change, but I feel this is an issue that needs comprehensive study,” she said, noting that legalizing marijuana could negatively affect road safety and mental health.

New York would become the 11th state to legalize recreational marijuana. The consumption of medical marijuana has been legal in the state since 2014.

Earlier this month, members of the Hempstead Town Board unanimously voted to enact a moratorium of one year on the sale of pot within the town, and a ban on smoking it in town parks and facilities. On March 12, Nassau County Executive Laura Curran said she would ask the legislature to pass a bill opting the county out of recreational marijuana sales should Cuomo’s statewide plan go into effect later this year.

Jaime Williams, an assemblywoman who represents various neighborhoods in Brooklyn, traveled to Rockville Centre to share her thoughts, noting the addiction problem throughout the state. “Legalizing marijuana is just going to enable that type of behavior, and we’re making way for a new wave of addiction moving forward,” she said. “We have to tread lightly on this. It’s a slippery slope issue, but we have to think about our next generation.”

“I’m not an elected official, I’m a mom,” chimed in Elizabeth Boylan, a volunteer for the Rockville Centre Coalition for Youth and a member of the school district’s Drug, Alcohol, and Violence Prevention Task Force for more than a decade.

Boylan, whose children are now 28, 25, and 23, has spoken out against legalizing recreational marijuana for the past several months at various village meetings and forums. She and other opponents of legalizing pot have pointed out that marijuana often serves as a gateway drug for addicts of other harmful drugs.

“I want you all to take a look at what’s down the street,” said Boylan, pointing in the direction of St. Agnes Cathedral. “You know what that cathedral does? It gets the end result of all the overdoses, of all the suicides of our young people. I’ve been to way too many.”

Though the drafted bill would only allow those at 21 or older to consume marijuana, Boylan was not alone in expressing concerns about the drug more easily reaching young people if legalized. Robert York, assistant principal at Kellenberg Memorial High School in Uniondale, said that academic enrichment, spiritual maturity and social growth would be stunted by passing the measure.

“We implore our elected officials to continue to work tirelessly in Albany to strike this down,” York said, “to eliminate this kind of opportunity to get into our children’s hands.”