Campaign to curb plastic bag use under way in Rockville Centre 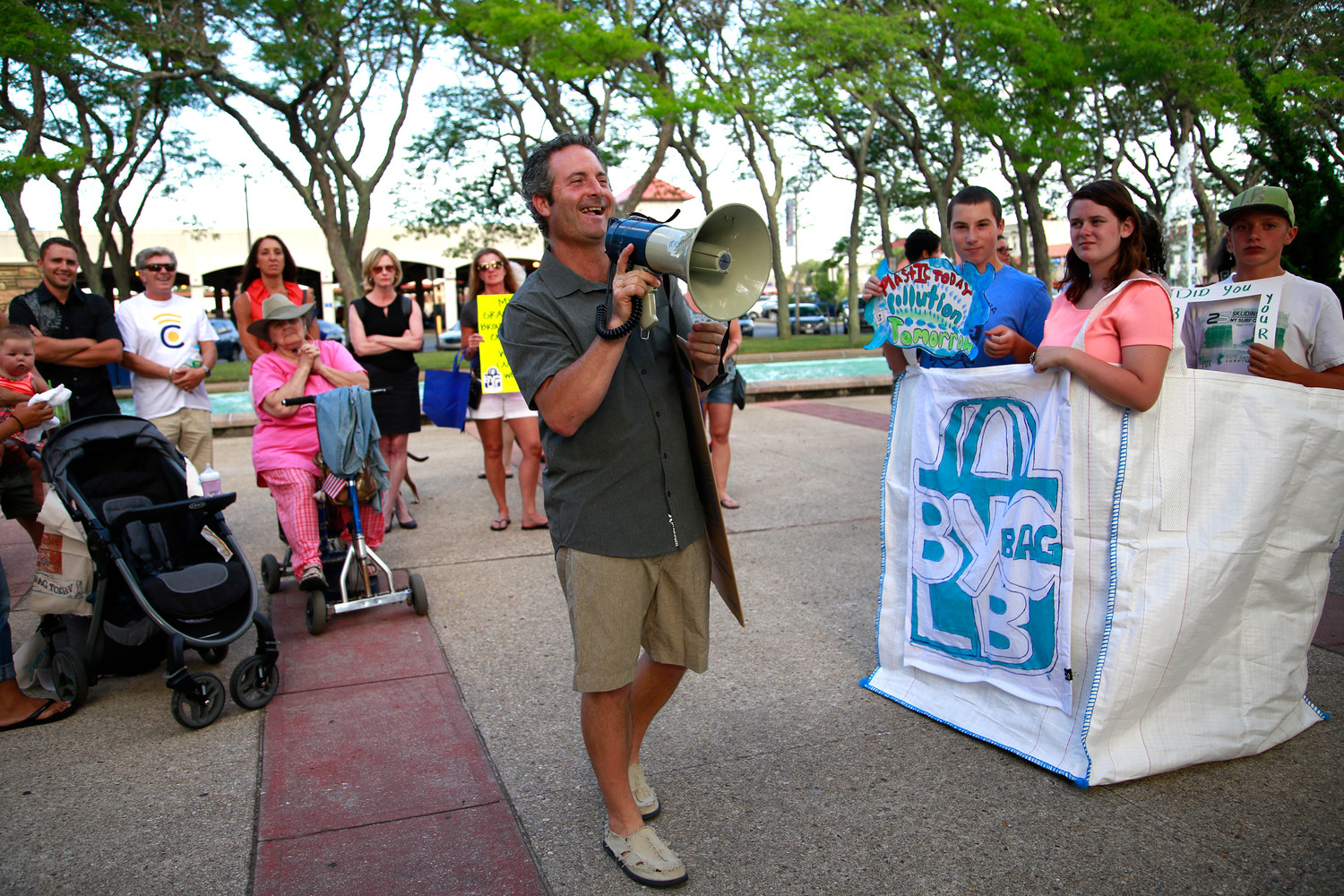 George Povall, of All Our Energy, led a rally in Long Beach in 2016, ultimately leading to a fee on single-use plastic bags. A similar campaign is brewing in Rockville Centre.
Sue Grieco/Herald
By Ben Strack

A campaign to reduce plastic bag waste in Rockville Centre is brewing, as local volunteers are helping spread awareness to follow the footsteps of other communities that have already taken action.

On Jan. 9, Turn of the Corkscrew Books and Wine hosted a free screening of “Bag It,” a film released in 2010 that documents the impact of plastic bags and other plastic consumer materials on land ecosystems and the marine environment.

Another screening of the film is scheduled for Feb. 27 at 7 p.m. at the Rockville Centre Public Library. A discussion will follow. Public viewings of “Bag It” have been a tool to increase awareness in other communities as well, including Sea Cliff, Lynbrook and Long Beach. The latter became the first municipality in Nassau County to implement a fee on single-use plastic bags when businesses began charging at least five cents last April for each one that shoppers use.

A Suffolk County law, which became effective on Jan. 1, also requires stores to charge a minimum of five cents per bag.

“The Board has been talking about a possible ordinance and are in the process of looking at some language from other communities,” Rockville Centre spokeswoman Julie Scully wrote to the Herald in an email. “They want to have a healthy balance of being environmentally correct and the ordinance be reasonable and enforceable.”

Scully added that the village’s Board of Trustees is waiting to see if Gov. Andrew Cuomo is planning to propose a statewide law.

Governor Cuomo signed a bill last February essentially killing a law that would have imposed a five-cent fee on plastic bags in New York City. The next month, however, he announced the launch of the state’s Plastic Bag Task Force, to develop a report and propose legislation to address the detrimental impact of plastic bags on the environment.

George Povall, executive director of All Our Energy, a non-profit that advocates, educates and empowers the public to support renewable energy and act on environmental issues, said that about 100 billion bags are used each year in the United States alone. His organization helped push the “Bring Your Own Bag” campaign in Long Beach, and is now seeking to expand the movement.

“People need to change their habits,” he said, “and once they see how easy it really is, then the change is made.”

Povall said that All Our Energy is developing a volunteer team in Rockville Centre to continue speaking with local businesses and other groups in order to gather “the people who realize that there’s something that can be done and something that should be done.”

“It worked in Long Beach,” Povall noted, “and we’re basically taking that grassroots formula to other towns.”

Karin Johnson, one of the volunteers, told the Herald that she recently saw “Bag It” for the first time in Lynbrook, and was motivated to bring the awareness to Rockville Centre. She added that she spoke with Mayor Francis X. Murray, who seemed interested in a potential ordinance. The Herald’s request to speak with the mayor was ignored.

“The movement here in town is in the very beginning stages,” Johnson wrote in an email, “but I’m starting to see very strong interest, and I’m really hopeful!”

Povall said the manager of a Long Beach supermarket estimated that the store has given out about 75 percent less bags since the fee was put into place, amounting to nearly 3 million less bags in a year. Conservative estimates, based on national data from the state DEC, Povall added, suggest that at least 8 million plastic bags are used in Rockville Centre each year.