Foundation serves those with special needs 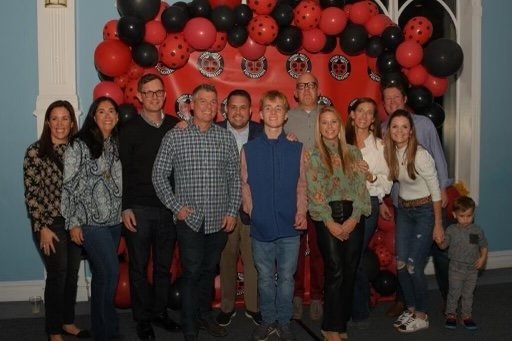 Martin Brull, fourth from left, celebrated the return of the in-person fundraiser for the Tommy Brull Foundation, in honor of his late brother, who died in 1999.
Courtesy Martin Brull
By Tom Carrozza tcarrozza@liherald.com

The Tommy Brull Foundation has continued its mission to help those with physical, mental and emotional disabilities through the pandemic. At its 14th annual fundraiser at the St. Agnes Parish Center on Nov. 13, the foundation made donations to 13 groups and individuals, including the Backyard Players & Friends and South Side High School student Will Ryan, who was the foundation’s 2021 Courage and Resilience Award winner.

In the first in-person iteration of the event since 2019, the foundation roared back. Last year’s event was a livestreamed telethon that lasted nearly six hours. “It was really cool and different — and I never want to do it again,” joked Martin Brull, the foundation’s creator.

Brull started the foundation in 2008 in honor of his brother, Tommy, who died in 1999, at age 23, in an accident near the Williamsburg Bridge. Some of the details of his death are still uncertain. He and Martin, who were just 17 months apart, were close.

Tommy devoted much of his free time to the special-needs community, and volunteered at Camp ANCHOR in Long Beach. The foundation in his name has raised hundreds of thousands of dollars for people with special needs and the organizations and programs that serve them.

Donations usually come from raffles of gift baskets provided by local businesses, but Brull explained that many businesses were not in a position to give because the pandemic has left them struggling financially. So friends and family members involved in the foundation took it upon themselves to buy items from local businesses to create the baskets. “It was so that we didn’t have to hit the businesses up when they’re going through a tough time,” Brull said.

There were about 60 gift baskets raffled off at the fundraiser, and 10 larger grand prize raffles along with silent auction items, which included vacation packages and tickets to the Charleston Food and Wine Festival in South Carolina.

Some of the donations from the fundraiser went to the Backyard Players’ new Employment Connection Program, which plans to partner with local businesses to provide work experience for members of the disabled community. Ellen White, the co-founder of the BYP, an inclusive, arts-based community program, said she believed the work program would start in January. Jeannine’s Gifts, Defusion Hair Salon and Parmagianni will take part, giving BYP members valuable on-the-job learning experiences.

“He helps a lot of organizations in town and every time we call him, he shows up and he’s always there for us,” White said of Brull. “So, we’re lucky to have him and the Tommy Brull Foundation. They’ve been amazing.”

Brull said he wanted to highlight the Backyard Players’ successful year despite the pandemic, as they opened a new storefront on Long Beach Road in October.

The foundation selected Ryan, 16, for its Courage and Resilience Award. “Ever since I can remember, Will has had an infectious and inquisitive personality [and] has always put others before himself,” Brull said. “He is eager to learn about anyone he meets.”

Brull cited Ryan’s empathetic nature, echoing several of his South Side High teachers and fellow students, who have expressed their admiration of the energy he devoted to the Pathways program, mentoring ninth-grade students.