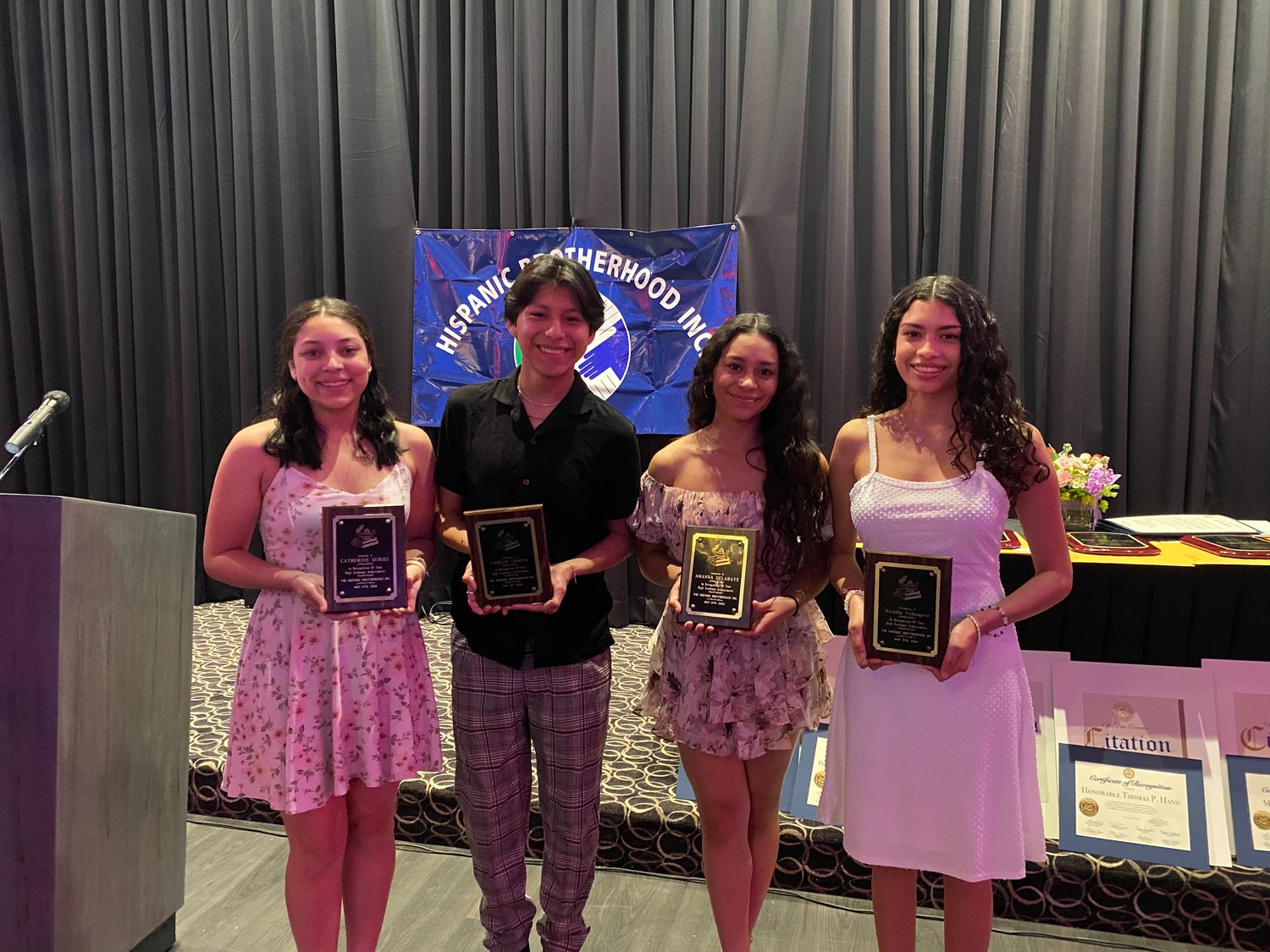 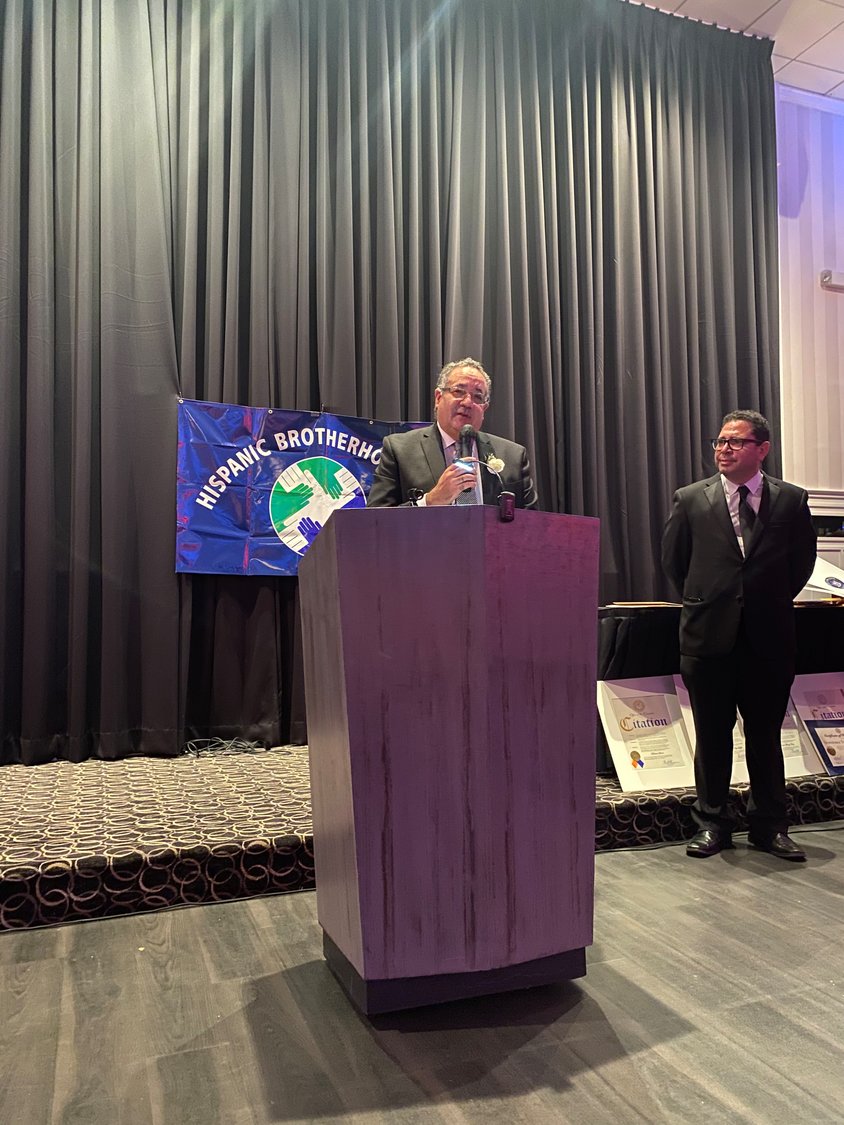 Mercy Hospital’s chief of cardiology, Dr. Thierry Duchatellier, spoke and was honored at the brotherhood’s annual scholarship dinner on May 5.
Tom Carrozza/Herald 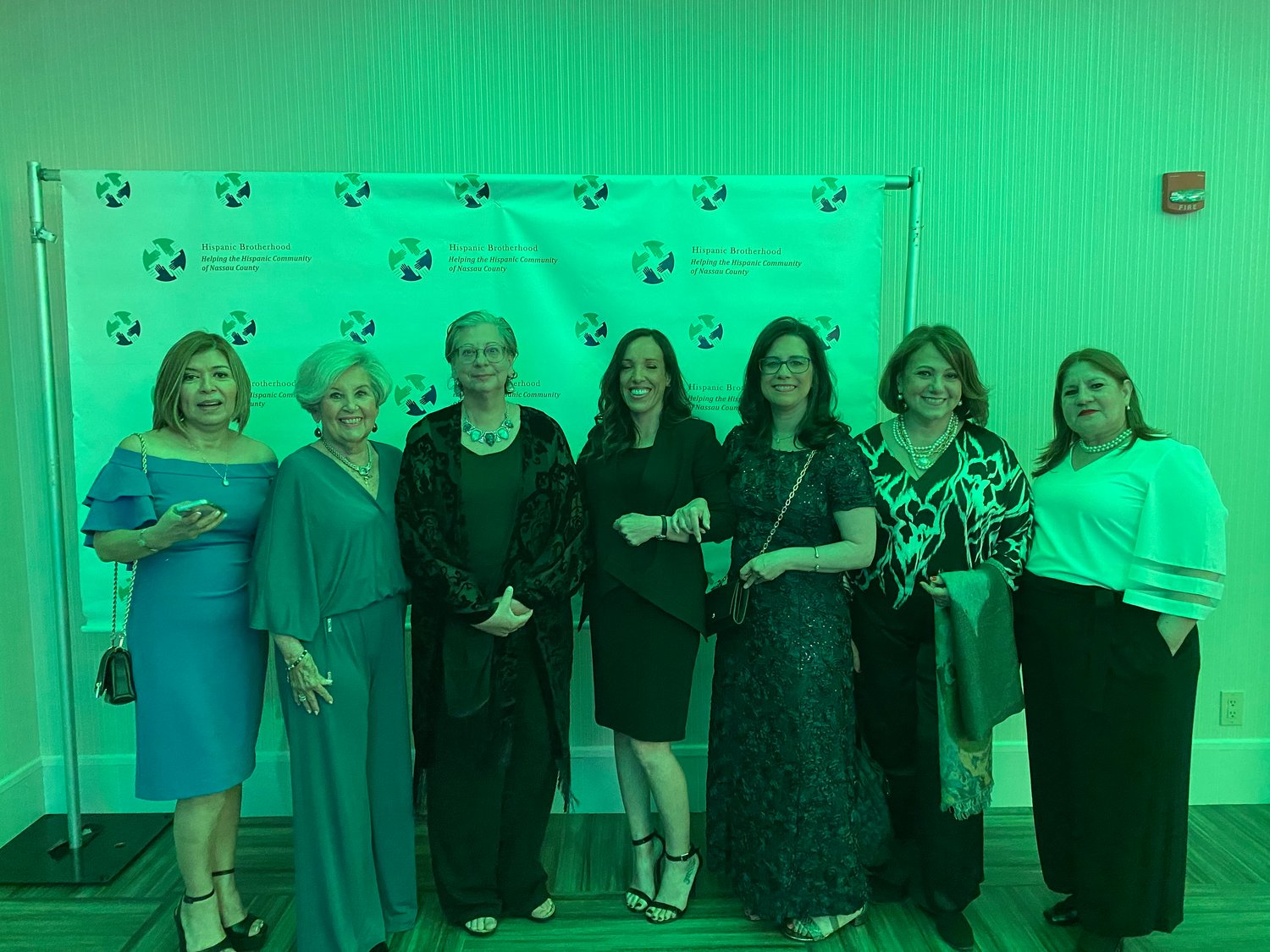 As Hispanics, as Latinos, we believe no matter where we come from, that once we come here, if we work, if we serve, if we care, that we can make tomorrow better.”
Rudy Carmenaty Board member, Hispanic Brotherhood
By Tom Carrozza

The Rockville Centre-based nonprofit Hispanic Brotherhood returned to Temple Avodah on May 5 for its first scholarship dinner since 2019.

In the intervening three years, however, the brotherhood has not rested, continuing to provide children’s and senior services, housing and scholarships, as well as its after-school tutoring program.

“This organization is resilient,” Rudy Carmenaty, a Hispanic Brotherhood board member, said. “And it’s resilient because it appeals to the fundamental principles of this country. As Hispanics, as Latinos, we believe no matter where we come from, that once we come here, if we work, if we serve, if we care, that we can make tomorrow better.”

The organization’s executive director, Margarita Grasing, was eager to surprise Rockville Centre students Natalia Velasquez and Amanda Delahaye, and Oceanside students Catherine Suriel and Carlos Garcia Jr., with college scholarships. The brotherhood and United Way each gave each student $1,000, and Molloy College matched Velasquez’s scholarship with another $1,000. Nassau Community College, the brotherhood and United Way combined to present Suriel with about $5,000 in scholarship money.

“Tonight is about the population that took the real brunt of this pandemic: the children,” Grasing said. “It was important to the board to make sure it was their night — that college was waiting no matter what the pandemic had coming, and that a life of their own was just beginning.”

Hundreds of guests donated to the brotherhood for what is usually an annual event, and the organization awarded four scholarships to local college-bound students and celebrated five honorees for their work in the Hispanic community.

Before taking her new position, Stillwell was a bilingual guidance counselor at the high school for 14 years. She is originally from Portugal but grew up in Mount Vernon, where she went through the trials of settling into an area with a language barrier. She said she was thankful to the brotherhood for its work to make students going through similar experiences more comfortable with the adjustment.

“They’re all things to all people,” Stillwell said of the organization and its volunteers. “They’re translators, lawyers, civil rights activists and advocates. We know that the more we uplift our community and neighbors, the more the overall community benefits from it.”

Duchatellier has served as chief of cardiology at Catholic Health’s Mercy Hospital, in Rockville Centre, for nearly 20 years. Originally from Haiti, “Dr. D” speaks English, Creole, French and Spanish, which has come in handy given the cultural diversity of the hospital’s patients.

“It’s very big, because it’s tough out there,” Duchatellier said of the brotherhood’s importance. “We are living in a world that is polarized, and minorities can be attacked or minimized, but we have to show them that with hard work and a good heart, you can overcome a lot of adversity.”