How slavery changed the face of Long Island 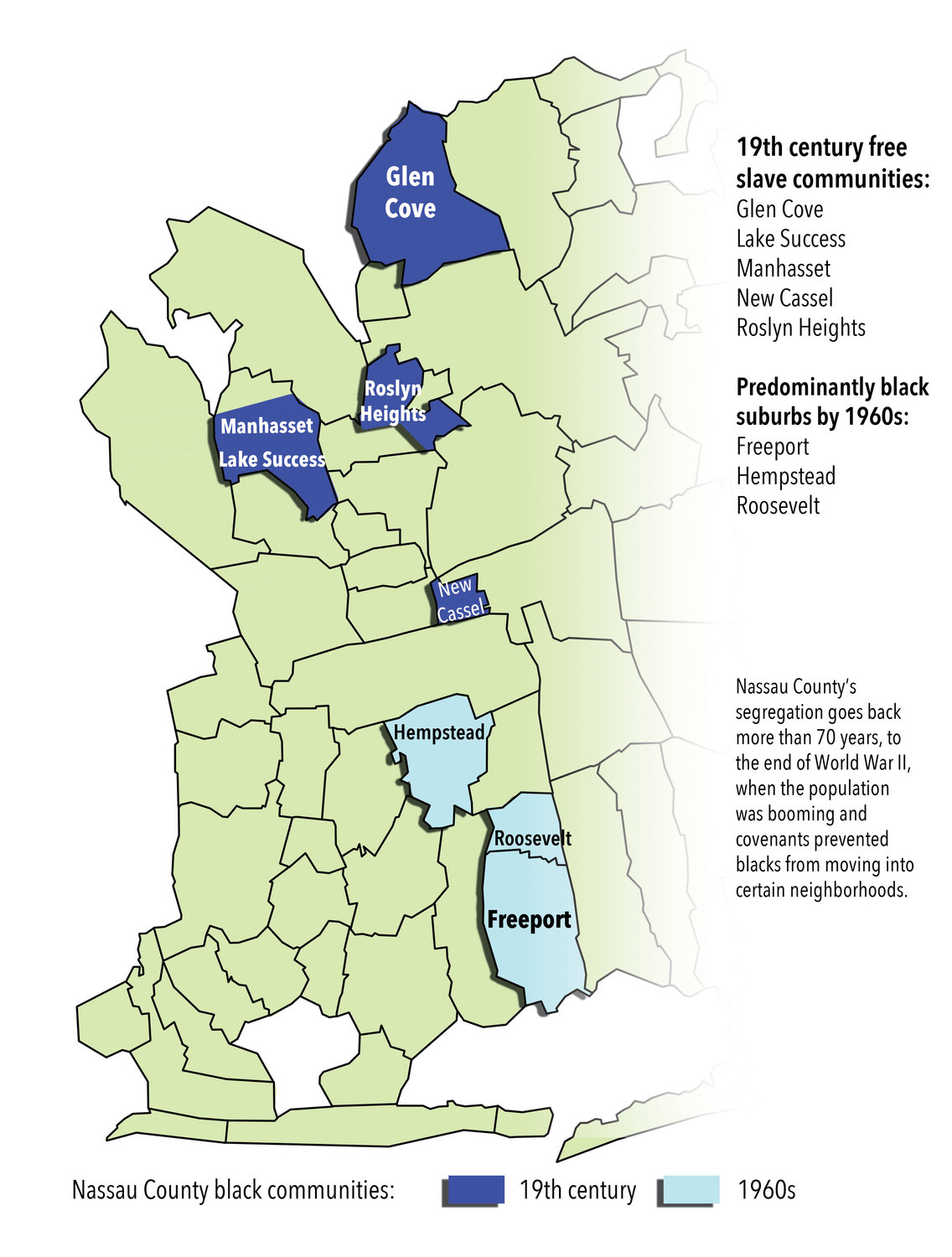 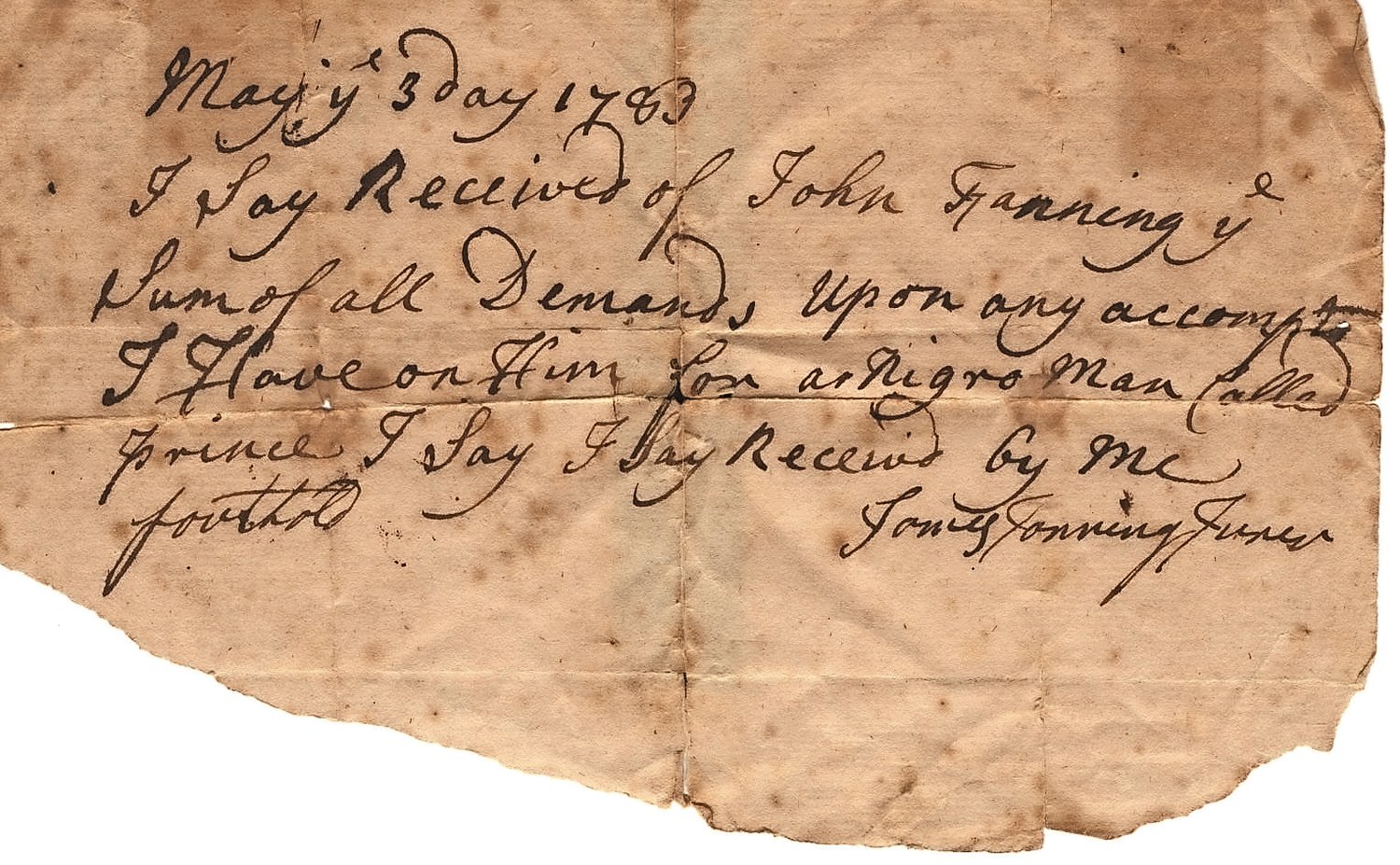 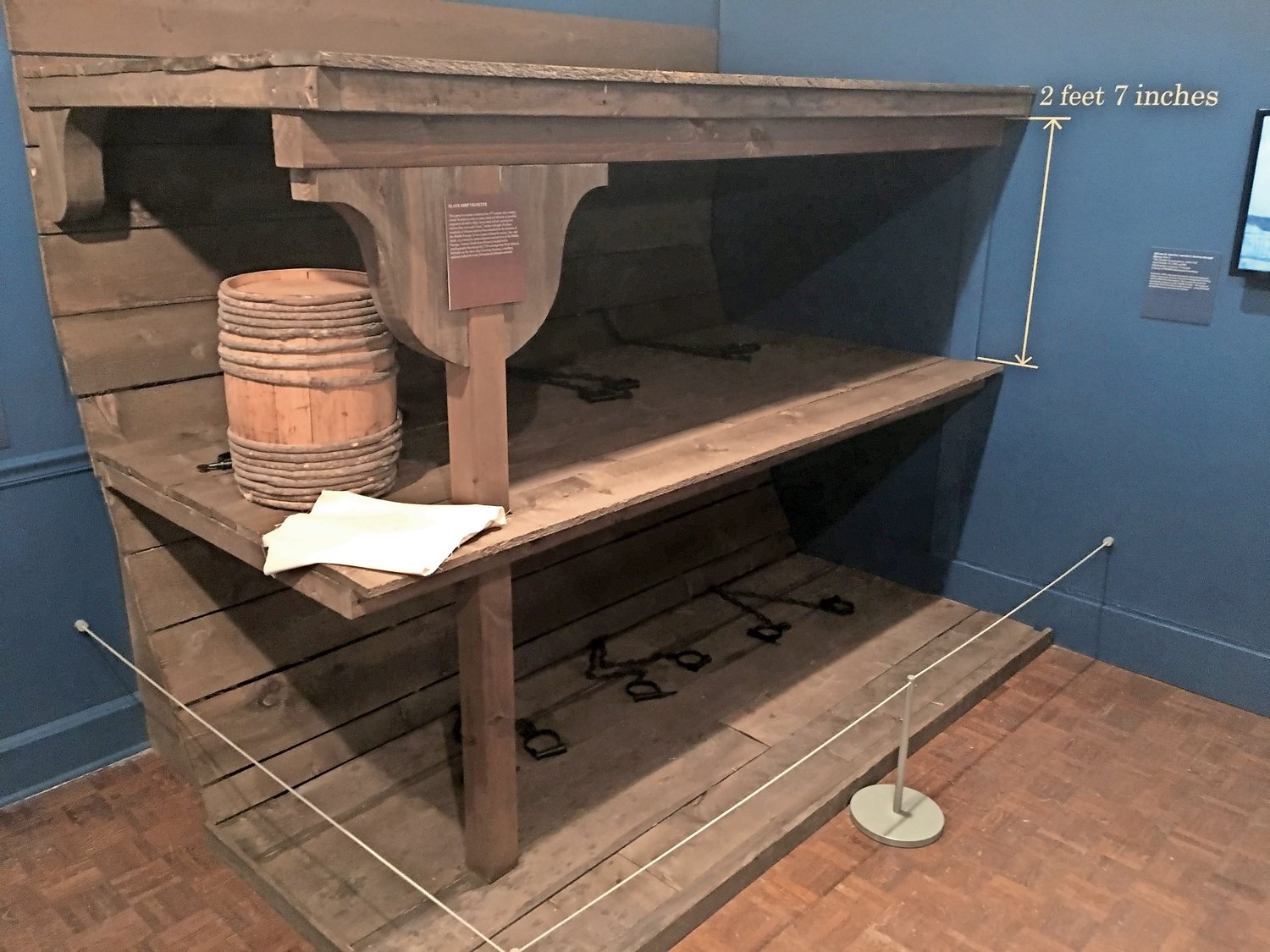 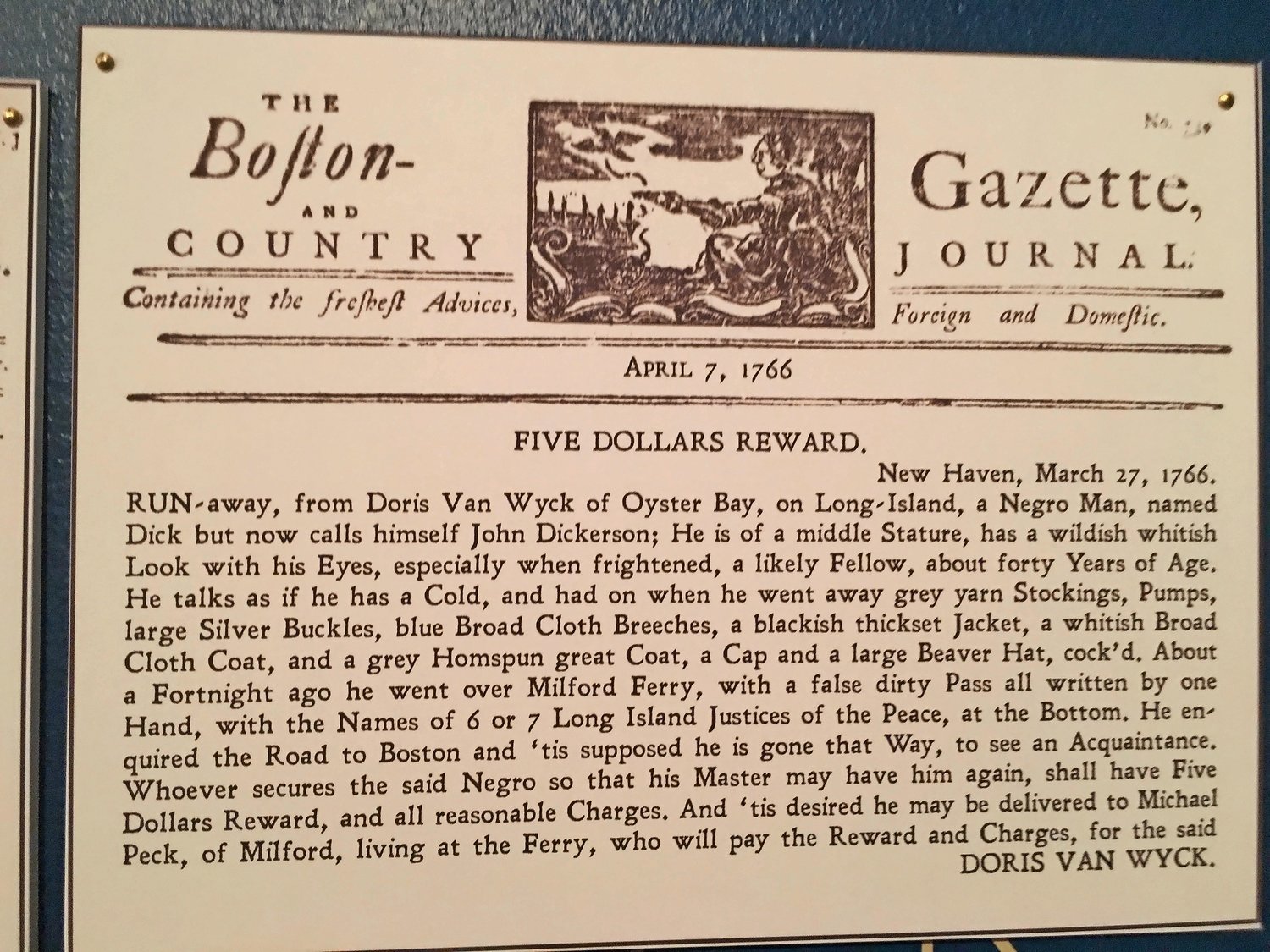 An advertisement about a runaway slave from Oyster Bay that offered a $5 reward for his return.
Melissa Koenig/Herald
Previous Next
A timeline of slavery in New York

1657 – George Fox, founder of the Quakers, told slave-owning churchgoers that everyone is equal under God.

1702 – New York passed the Act of Regulating Slaves of 1702, which stated that any slave who struck a white person would be sentenced to 14 days imprisonment and beaten.

Tom and Mercy, Ben, Nancy and Jacob. These were only five of the slaves who lived on Long Island before New York abolished slavery in 1827.

“In some cases, a single piece of paper with one of these given names is the only evidence that they ever lived,” Jonathan Olly, curator of the Long Island Museum, in Stony Brook, said. “Together they represent the thousands of Africans, and their descendants, kidnapped in their homelands and eventually brought to New York.”

Documents tell a horrifying story of Long Island’s 173-year history of slavery —contracts to sell slaves, newspaper advertisements to search for escaped slaves, and photographs of black men, women and children in bondage. They were on display at a symposium, “Long Road to Freedom: Surviving Slavery on Long Island,” held at the Long Island Museum in March.

“Long Islanders are proud of their diversity,” Olly said, “but that also must come with the recognition that not everyone’s ancestors wanted to come here, and that not everyone had equal opportunity.”

This week the Herald pauses midway through its series, “The Racism Around Us,” to step back from the current state of affairs to understand better how we arrived at this point. We begin at the beginning — from Colonial times through the early 19th century, when slaves helped shape the land and its people.

According to documents in Hofstra University’s Special Collections Department, the first slaves were brought to Long Island in 1654, when Nathaniel Sylvester moved from Barbados to Shelter Island. By 1698, there were nearly 2,100 black people living in New York, the majority of whom were slaves. Almost half of them lived on Long Island.

Slaves lived in their owners’ houses or in cottages on their properties, working beside Native Americans and European indentured servants in farming, tailoring and whaling. Female slaves were also assigned roles as domestic servants, their tasks ranging from cooking to caring for their owner’s children.

Most Long Island families had no more than one or two slaves, said Andy Bader, a Town of Hempstead archivist, and by the 1700s, there were only seven individuals who owned more than 10 slaves. Bader attributed that to the fact that the North had smaller farms, which did not produce as many cash crops, such as tobacco or cotton, as the South. There, some 46,300 plantations had more than 20 slaves each, with one South Carolina rice plantation having more than a thousand, according to the nonprofit National Humanities Center.

Slave laws in New York were among the most severe in the North, and often as harsh as any in the South. The Act of Regulating Slaves of 1702, for example, stated that any slave who struck a white person would be sentenced to 14 days in prison and beaten. Many slave owners did not wish to punish their slaves to the full extent of the law because they worried about losing them to imprisonment, but they risked fines if a court found they had failed to punish their slaves according to the law, documents in Hofstra’s Special Collections state.

As was the case in the South, slave families could be broken apart in New York when slaves were sold. One law forbade three or more slaves from congregating. Another stated that children born to slave mothers were automatically slaves. Another prohibited slaves from traveling more than a mile from their owners’ homes without permission. And another stated that any slave’s testimony against a white person was inadmissible in a court of law.

The movement to outlaw slavery in New York started with the Quakers, according to Lynda Rose Day, professor of Africana Studies at Brooklyn College. In 1657, she said, Pastor George Fox of England, founder of the Religious Society of Friends, better known as the Quakers, preached to slave-owning churchgoers that everyone was equal in the eyes of God. Quakers taught their slaves to read and write, and paid freed slaves to work on their farms or in their businesses. Some, Day said, gave land to their former slaves.

By 1783, most Long Island Quakers had freed their slaves, Day said, and in the 19th century, the Quakers aided slaves on the Underground Railroad in Westbury and Jericho. Slavery became more unpopular in New York after the American Revolution, Bader said, and the slave population began to decrease. Instead, people brought in more indentured servants from Europe.

New York, meanwhile, enacted legislation to abolish slavery in 1799, stipulating that male slaves would be freed when they reached age 28 and females would be freed at 25. Another law, passed in 1817, stated that slavery would be abolished in 10 years. When slavery ended in New York, Bader said, 85 percent of the population did not own slaves.

Once freed, former slaves could leave their one-time masters’ properties or continue to work for a living, explained Geri Solomon, assistant dean for Special Collections at Hofstra University. “It depended, person to person,” Solomon said.

Most of those who did move away lived close to where they were once enslaved, which led to the emergence of black communities on the edges of white communities in the 19th and early 20th century, said Jennifer Anderson, associate professor of history at Stony Brook University. They were relegated to makeshift housing, and few could vote because they did not own land, as required by the law then.

“Long Island’s status as one of the most segregated suburbs in the United States is well-known and well-documented,” Anderson said. It all began with free slave communities, and continued in the mid-20th century with exclusionary lease clauses that forbade black people from moving into communities like Levittown.

In Nassau, free slave communities developed in Glen Cove, Manhasset and Amityville, where there were large Quaker populations. In Suffolk County, one freed slave, Rufus Perry Jr., became a lawyer, and challenged laws that permitted segregation while developing plans for a three-acre refuge for freed slaves near Riverhead. The proposal included a community center, a fire department and hotels for black people.

Also in Suffolk, freed slaves in Setauket mixed with the native Setalcott tribe. Christopher Matthews, a professor of anthropology at Montclair State University, said their descendants are working to preserve their history in the area, even though the U.S. census shows that only 1.33 percent of Setauket is black. Matthews attributed the decline in population to rising property costs.

“These stories exist — they’re kind of scattered throughout the community and throughout Long Island,” Olly said. “If you go to any library, any historical society, you’re going to find some reference, some part of African-American history, which is part of the larger story of Long Island history.”

Alexandra Dieckmann contributed to this story.