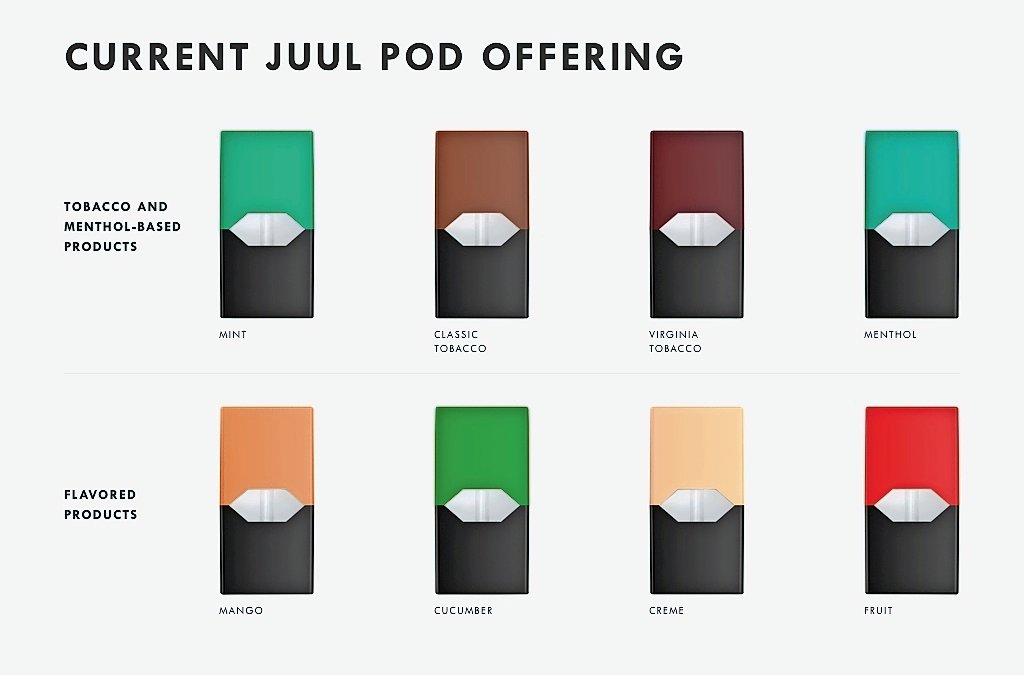 Last November, JUUL stopped selling its flavored products to retail distributors to help prevent underage use. It still, however, sells its tobacco and menthol-based products to them.
Courtesy JUUL
By Briana Bonfiglio

As the nation sees a spike in teenage vaping and nicotine addiction, the best-selling electronic cigarette company, JUUL, has come under scrutiny by some who say it targets young people with its ads and products. In response, JUUL took action to curb its products’ appeal to youth and focus marketing more keenly toward adults hoping to quit cigarettes.

JUUL attempted this by ending sales of its flavored pods — mango, crème, cucumber and fruit — to its retail distributors, which sell to brick-and-mortar stores, last November. However, the products are still being sold at some Rockville Centre convenient stores.

“Our youth are still vaping,” said Ruthanne McCormack, project manager for the Rockville Centre Coalition for Youth. “The flavored pods are most often used by kids, so more kids are getting addicted to nicotine, as one pod has the equivalent of one pack of cigarettes.”

The Coalition has been steadfast in educating students and parents about the dangers of youth vaping and taking action to prevent it. In March, the group co-sponsored at talk at South Side High School, where Dr. Stephen Dewey, a research professor in the New York University School of Medicine’s Department of Psychiatry, noted that nano-particles of nickel, chromium and cadmium found in vaping devices go into users’ body and get trapped in their kidneys.

In the message, Burns said that the company’s intent was “never to have youth use JUUL products” and that it recognized that flavors drove youth appeal. He expressed commitment to acting to solve the problem of underage e-cigarette use.

“This was just one of the many steps we took in the JUUL Labs Action Plan, which represented the most dramatic and aggressive steps of any other manufacturer in the industry to prevent underage use,” Ted Kwong, a media relations representative for JUUL, wrote in an email to the Herald.

The Coalition’s continued push to curb youth vaping comes after an employee of the convenience store at 165 Maple Ave. was arrested on April 4 for allegedly selling vape products to customers under 21, according to Rockville Centre police.

Workers at the 7-Eleven on North Village Avenue and at the LIRR station newsstand told the Herald they would not take flavored JUUL products off the shelves until it became illegal.

“Why would we? They sell,” said a manager on duty at the 7-Eleven, who did not give his name, noting that the product is not banned and the store does not sell it to minors. McCormack said that when she visited the owner, he said he would speak with their distributor about it.

“As long as they don’t ban it, we will sell it,” said an employee at the LIRR newsstand, who also did not provide his name.

McCormack reported that the owner of the LIRR newsstand was unaware of JUUL pulling certain flavored pods. When the owner called its distributor, it also was unaware, according to McCormack.

Anton’s Mobile Station does not sell flavored JUUL pods, but sells similar flavored e-cigarette products, this reporter observed last week when visiting the store. In addition, the owners of Kaivel Deli said they would call their distributors about the matter.

Dennis Clark, youth officer for the Rockville Centre Police Department, had not responded to the Herald’s request for comment at press time Tuesday.