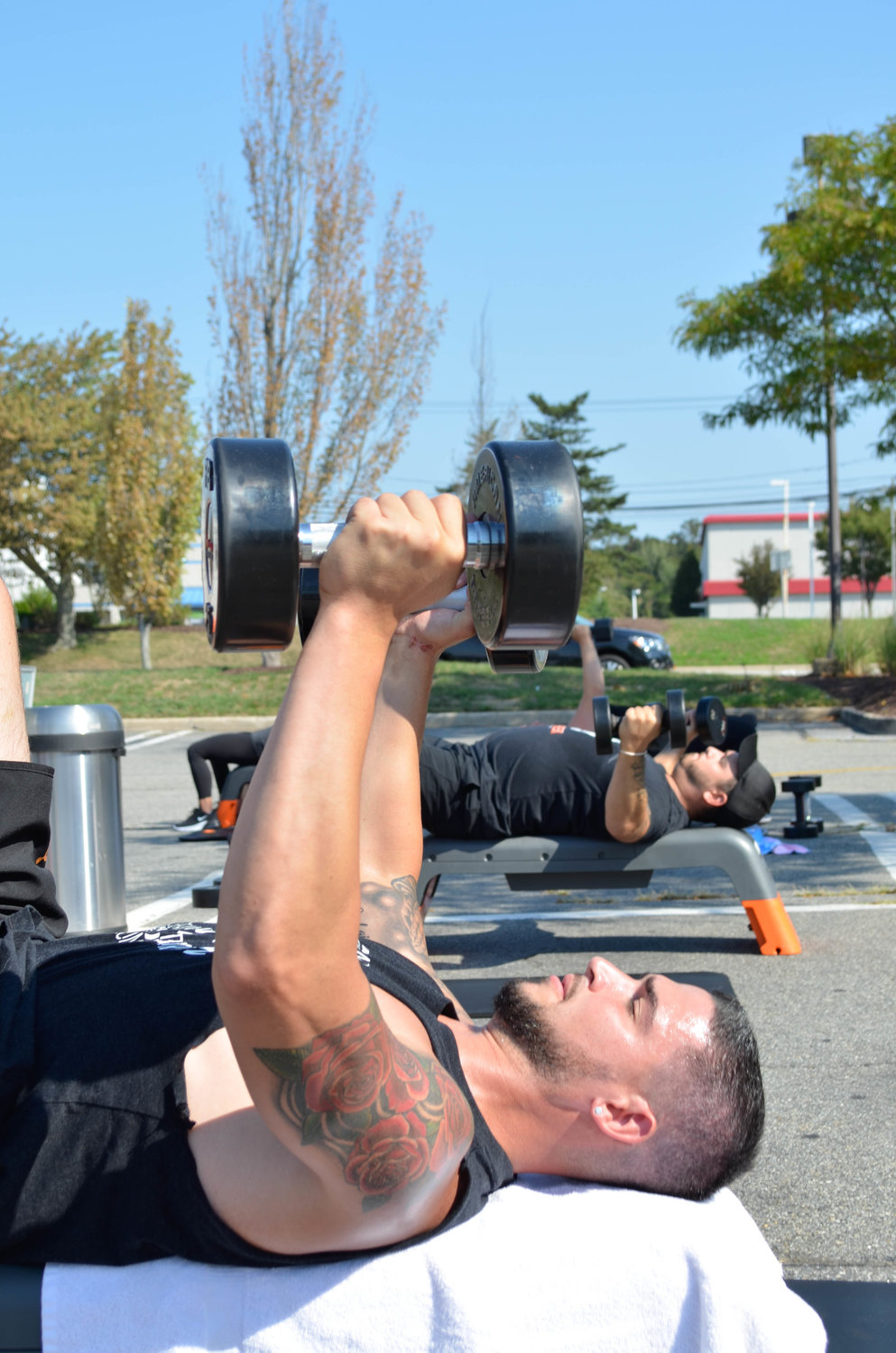 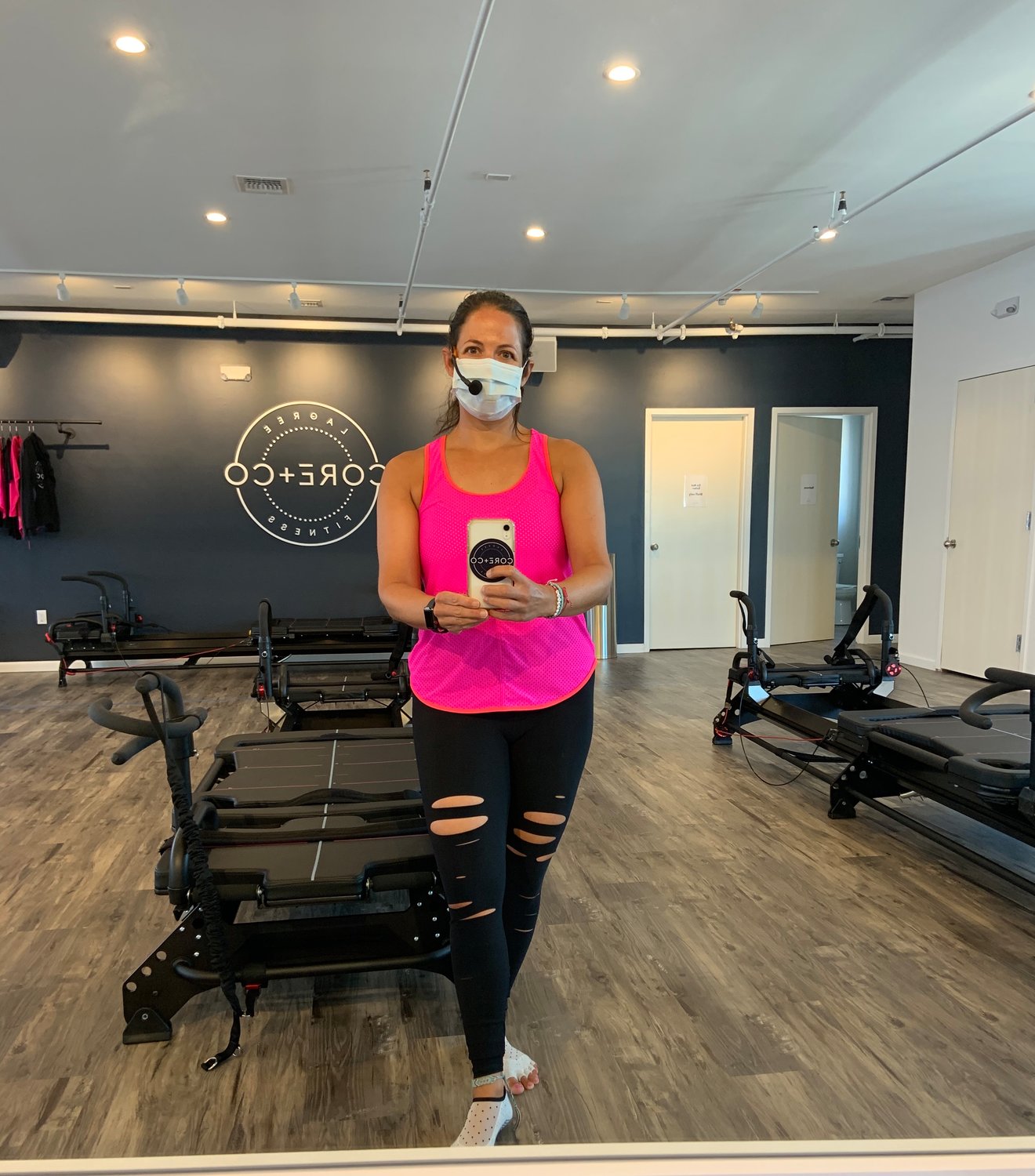 Rachel Denenberg, co-owner of Core & Co., said her studio has taken extra steps to allow for social distancing and has increased its sanitation protocols.
Courtesy Rachel Denenberg
Previous Next
By Jill Nossa and Karen Bloom

Gym owners are rejoicing this week as fitness centers in Rockville Centre began welcoming back members for indoor workouts for the first time in over five months.

Fitness centers had expected to be a part of Phase 4 of the state’s reopening protocol last month, and many have advocated for their reopening since June. The decision they were anxiously awaiting finally came last week as Gov. Andrew Cuomo announced that gyms could reopen as soon as Monday, following inspection by local authorities.

They are allowed to open at 33 percent capacity, and masks must be worn at all times. The facilities will also have to perform health screenings; patrons will be required to use sign-in forms to help with potential contact tracing; and ventilation systems must be upgraded to help prevent the transmission of Covid-19. Closed since March, gyms are reopening as the state sees its lowest infection rate since the coronavirus pandemic began.

Reopening preparations at Sportset Health and Fitness Club, on Maple Avenue in Rockville Centre, have been under way for months, and owner Dennison Silvio said that the club, which reopened Monday, was prepared to welcome members back safely and in compliance with all health guidelines. In fact, he said, the facility is “stronger and safer than ever,” with a comprehensive reopening plan that “exceeds industry standards.”

“I feel relieved that we’re finally reopening,” Silvio said. “We’ve been working hard to prepare and implement new and comprehensive sanitization and cleaning procedures to ensure the maximum safety of our staff and members.”

Sportset has taken measures to ensure less surface contact, Silvio explained, installing automatic door openers and hands-free sinks in the restrooms, implementing contactless check-in and installing temperature scanners. Members must schedule appointments to use the gym or sign up for group exercise classes. Plexiglas barriers have been installed at the counters, and there are additional cardio rooms, with all equipment spaced six feet apart. Hand sanitizer is readily available, and spin bikes are sanitized before and after each class. Additionally, a professional cleaning company was hired to sanitize the club every night, and ultraviolet-light sanitizers have been installed as well.

Sportset has offered classes online since spring, and began offering outdoor classes in June, which are also livestreamed. Silvio said he expected the outdoor classes to be even more popular now that the facility is open, and he knew that many members were just as eager to get back to the gym as he was to open it.

“Some people are anxious to come back and probably never would have stopped coming,” he said. “Others want to come back but are still not comfortable, and some, unfortunately, have moved on.”

Orangetheory Fitness, on Merrick Road, has also established new safety protocols, and its owners said they looked forward to welcoming members back on Wednesday. “We’re super excited,” said Nick Galanis, who, with his brother, Manny Galanis, is an area developer for Orangetheory. “We were not anticipating being able to open so soon.”

For the past two weeks, Orangetheory has offered classes outdoors, and is now prepared to have members indoors as well. Galanis said that they are required to sign up ahead of time, either online or by phone, are asked to arrive no more than five minutes ahead of their scheduled class time, and line up six feet apart outside instead of in the lobby. As they sign in, they must have their temperatures checked and use hand sanitizer. Masks are required, and will be provided to those who don’t have them.

Members are assigned a spot in one of three rooms, to use weights, a treadmill or on a rowing machine. For added safety, Galanis said, they are also assigned station numbers, which are the same in each room, so they aren’t sharing equipment.

The biggest difference in the facility’s operations is that coaching will be done from a distance, and not hands-on. But unlike home workouts, members can still get the feedback they need.

“We’re really excited to see our members again and regain that sense of community,” Galanis said. “Even though we were still teaching throughout the quarantine, it’s not the same as being in person. We just hope our members are comfortable coming back, and are safe.”

Those who are not ready to return to the gym, he said, can freeze their membership until they are. “We don’t want to push anybody into an uncomfortable situation,” he said.

Rachel Denenberg, a co-owner of Core & Co. on Sunrise Highway, agreed that virtual and outdoor workouts aren’t the same as being in the studio, particularly in a facility like hers. Core & Co. uses a machine called the Megaformer to work core muscles that, Denenberg said, is difficult to duplicate. The gym offered online classes from March to July, and added outdoor sessions over the summer, though instructors and clients alike had to adapt by using gliders, resistance bands and ankle weights to mimic exercises done on the Megaformer.

“It was good to keep the clientele together and keep our name out there,” Denenberg said. “Other gyms and fitness centers can do what they always do outdoors, but for us it’s not the same without the Megaformer. The body just needs it.”

Her studio, she said, is actually “designed for social distancing and contact tracing” since members use one machine and are required to register for classes through an app. But the Megaformer machines are now six feet apart, which has meant the removal of half of them: There are now six where there were once 12.

“We’re excited to be back,” Denenberg said. “It’s been a long five and a half months.”

Like other fitness centers, Core & Co. requires masks and temperature checks before classes, and has stepped up its sanitation protocols and installed filters to purify the air. To further decrease interpersonal contact, Denenberg said, the cubbies for stowing belongings and the couch in the lobby have been removed. Class times are scheduled so there is no overlap, further discouraging social interaction.

“That social piece was my favorite part about owning a studio,” Denenberg said. “Hopefully it won’t last forever.”