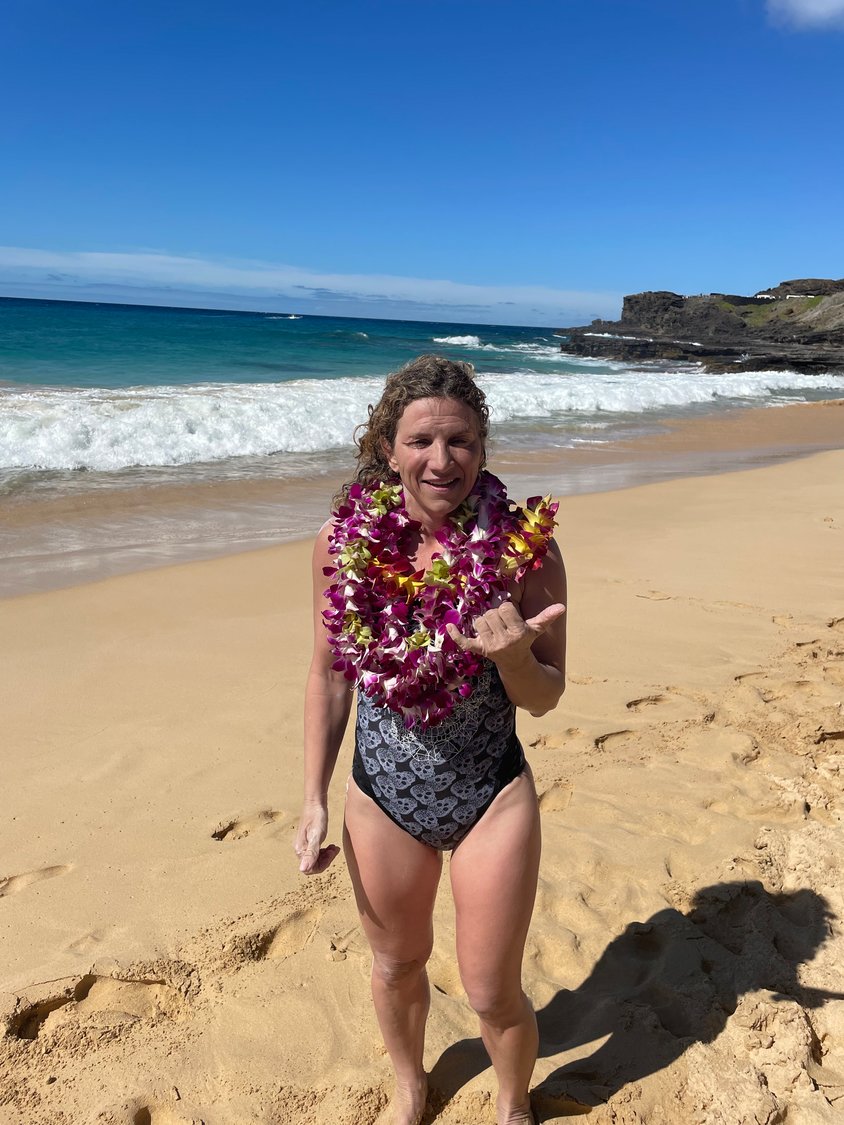 Lori King was covered in man o’ war and jellyfish stings, and physically and mentally exhausted from a 14-hour, 38-minute swim through Hawaii’s shark-infested Kaiwi Channel when she heard a sound she had been longing for throughout her arduous solo effort.

It was a group of friends and locals cheering her on as she reached the shore at the end of what for most would be a seemingly impossible swim.

“That was awesome,” King said. “I just didn’t think it was going to ever come. When you’re in the dark and in the middle of it, you just feel like that moment is not going to come, and then it’s happening and you just can’t believe that it’s happening.”

The cheers came at the end of a grueling freestyle journey from the Hawaiian island of Molokai to Oahu, as King completed one of open-water swimming’s most difficult challenges, reaching a personal goal she had set years ago. In all, she swam 30 miles in less than 15 hours, starting at 6:45 p.m. on June 4 and finishing at 9:23 a.m. on June 5, becoming just the 86th person to complete the route. Hundreds have attempted it and failed.

King, 46, is a public health researcher who lives in Rockville Centre with her husband, Michael, and their children, Ryan and Anna. She grew up in Pennsylvania, and began swimming when she was 5. She swam throughout high school, and then was a decorated swimmer at La Salle University, in Philadelphia, from 1993 to 1997. The rigors of heavy competition took a toll on her, and King took a break from swimming until 2004. In 2006, however, her love of the sport led to an interest in open-water swimming.

After training for several years and competing in many swims, King was finally ready to attempt the Hawaii challenge, but her efforts were derailed for two years because of the coronavirus pandemic. She remained determined, and finally got her chance to attempt a crossing of the “Channel of Bones.” Though it is 26 miles between islands, King ended up swimming 30 miles because of the current pushing her southeast, away from Oahu.

“It’s considered one of the hardest, if not the hardest, channels in the world,” King said, “so for a marathon swimmer, to be able to try and attempt it and see how far you can push yourself, it’s just something that I felt like I needed to do, wanted to do.”

Under channel swimming rules, King was permitted to wear only a swimsuit, a cap and goggles, and nothing that retained body heat or increased her buoyancy. No one was allowed to touch her during her journey, and if she had clung to a boat or got assistance in any way, her feat would not have counted. As she swam, King had a crew on a boat nearby in case anything went wrong. Ivan Shigaki, Kenneth Kimitsuka and Jonaa “Bulla” YiuLin took turns piloting the boat, and crew member Tina Neill kept King motivated throughout the swim, and sent her a bottle of a powder-and-water mixture via a feed line from the boat every 30 minutes.

While the ocean currents were a source of worry, King also had to keep her mind on the sea life in the channel — a host of box jellyfish, man o’ war and cookiecutter sharks. Though she managed to avoid the sharks, she was stung several times by jellyfish, and suffered an especially painful strafing by a man o’ war, from her chest to her armpit, near the end of the swim. If a shark had been spotted, her effort would have quickly come to an end.

Janine Serrell, who met King several years ago at open-water events in New York City, has crewed for her on some of her other swims, but also witnessed a dangerous encounter in the Kaiwi Channel. She served on the crew for Eric Schall and Steve Gruenwald when they set out on the island-to-island swim, but their attempt was cut short when Schall was bitten by a cookiecutter just below his navel at the halfway point. Serrell recalled an intense scene, but the crew pulled Schall onto a boat where a crew member who was a registered nurse treated his wounds. He spent some time in the hospital before being discharged. Serrell said she didn’t believe King would be bothered by sharks, because she timed her swim well.

She also lauded King's drive. “It takes fortitude,” Serrell said. “I will always say it’s one of the things I love about this sport. She’s an amazing swimmer, but it’s only partially about how well you swim. Can you handle cold water? Can you handle water that’s swelling? Can you keep your feet down? Can you stay in when you want to give up? She is always well trained. She’s fast and she’s fearless.”

King’s fortitude was especially tested toward the end of her swim. She typically swims 22- to 23-minute miles, she said, but during the final six miles, the water changed, and she was battling a difficult current. The last mile and a half took her nearly an hour and a half.

“I’m pretty robotic,” she said. “I feed and I go and I have a rule: Don’t tell me where I am, don’t tell me what time it is and don’t tell me how far I swam or what I have left. I was already starting to unravel, because I was looking at the shore and it wasn’t getting closer.”

Eventually, she reached the shore of Oahu, to much fanfare. With a major goal now complete, King said she hoped to swim in Gibraltar and Greece in the future. But for now, she said, she would fondly reflect on conquering the Kaiwi Channel and remember the group of friends and locals who eagerly cheered her on — and handed her leis at the end of her Hawaiian journey.

“It was unbelievable,” she said. “I couldn’t believe that it was finally there. I was looking at the shore for the last hour and a half for over 80 minutes, stuck in that current and thinking I wasn’t going to get there. When I raised my hand and they blew the whistle, I was very choked up. When it finally happened and I heard them calling my name from shore, it was very emotional. I can’t describe it.”