A house where hope lives 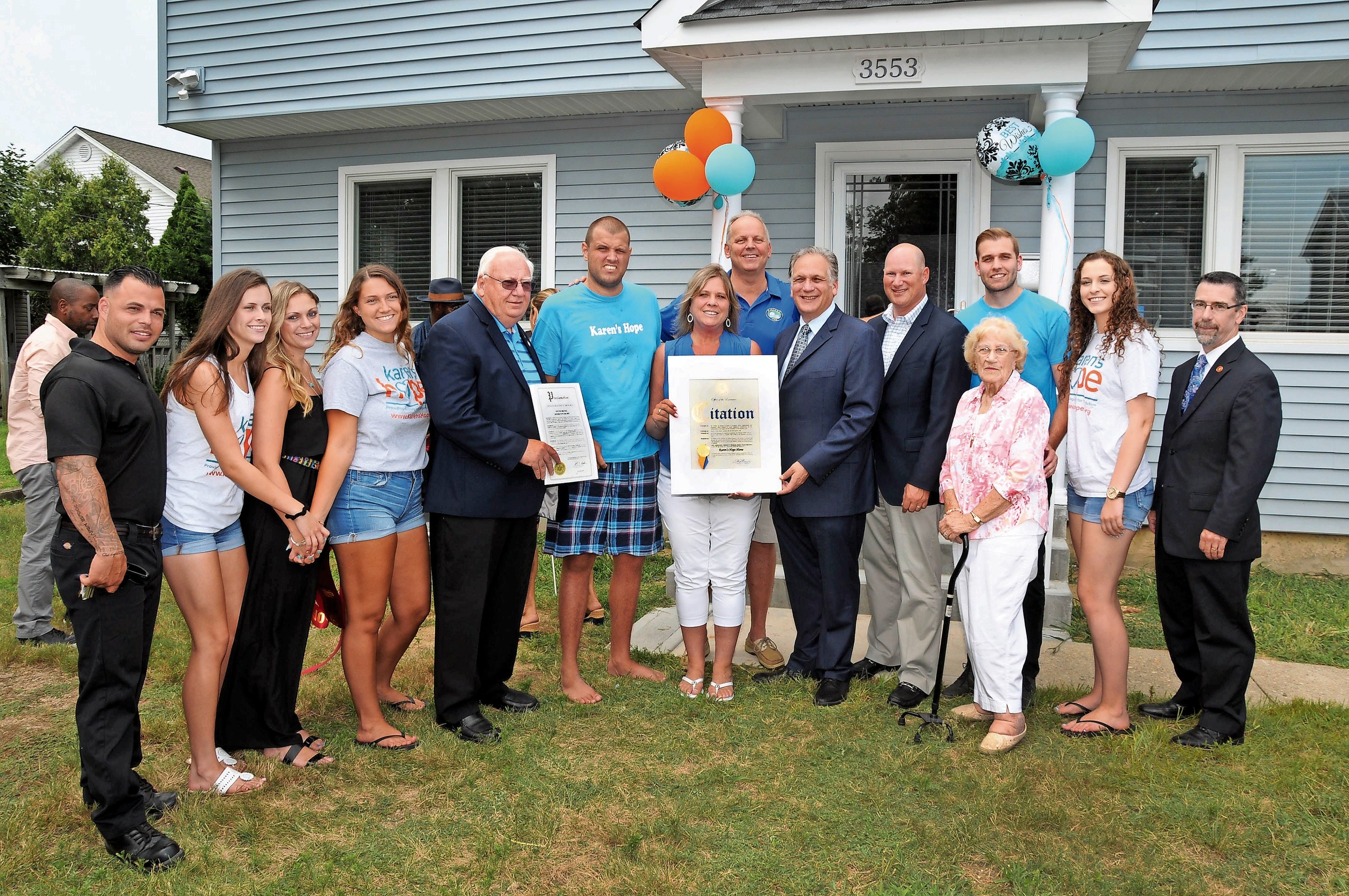 Karen’s Hope will hold its second annual golf outing at the Eisenhower Park White Course (Field 7) on Sept. 12, with check-in at noon.

Registration fees will go to the nonprofit organization. Participants will also be treated to lunch, a cocktail hour and dinner. Individuals may register for $250. Groups of four can participate for $950. Registration for the dinner and cocktail hour only costs $85 per person.

To participate, contact Alexandra Anderson, executive director of Karen’s Hope, at allie.karenshope@yahoo.com or (516) 643-3890.

Ryan is autistic, his mother explained, and his biggest challenge is expressive language. Siler said that she would talk to him about adult life, but she did not know whether he understood until he learned the Rapid Prompting Method, through which he communicates with her and therapists by pointing to letters on plastic boards to spell out words.

Thanks to the efforts of his mother and the volunteers for her nonprofit organization, Karen’s Hope, Ryan is now living in a home on Kenora Place with two housemates: Laura Cook, 65, who owned the home for more than 20 years before it fell into foreclosure; and Dillon McManus, a 27-year-old who is also autistic.

At a ribbon-cutting ceremony for the Karen’s Hope House on July 28, Siler said that Ryan was overwhelmed. In an RPM session two days later, he reflected on his family’s and friends’ multi-year journey to take over the mortgage and renovate Cook’s family home so that he and McManus could lead independent lives.

“Have to map the reasons I am most proud of this,” he “said” by pointing to each letter of every word with a pencil. “Racing to share how important it is to have independence and self-esteem. Watching Mom’s hard work and dream come true has internally inspired me to never lose sight of my goals: making the world a better, more inspiring place and give us an outlet for our strengths, while in the community, working to change opinions of non-typical individuals.”

Completion of the renovation was a major milestone for her family and her nonprofit group, Siler said. She now looks forward to continuing to advocate and develop programs for disabled adults and their relatives.

Cook, a teacher’s aide at the Rosemary Kennedy Center in Wantagh, said her husband left her in 2014 — the same year she was diagnosed with colon cancer. When she learned that her house would be foreclosed on, she turned to Siler, her friend and neighbor,  for help.

“She is just an amazing woman,” Cook said. “She told me that I was the sister she never had. I have seen her fight for so many things.”

At the time, Siler, a mother of five, was caring for her children and brother, Michael Russell, who had Down syndrome. He had been neglected and abused in a group home, she said, so she was looking for a way for him to live independently while making sure that he had the care that he needed.

Siler presented her longtime neighbor with what she considered a creative solution: The nonprofit organization that she was founding at the time would give Cook the financial help that she needed to stay in the home, and Ryan and Russell could live with her.

Russell died after battling leukemia that year, but Siler said she believes that his spirit lives on through her work. “I said to him, ‘I promise to be your voice if you watch over Karen’s Hope,’” she recalled. “Two months after he passed, on May 2, 2014, which is my son Michael’s birthday, I received certification that I was officially a 501(c)(3).”

Charlie Hammerman, CEO of the Disability Opportunity Fund, was instrumental in helping Siler with grant applications and in court proceedings, she said. By February 2016, Karen’s Hope had taken over the mortgage for Cook’s home. Hammerman offered the Silers a $65,000 loan to renovate the house, and the Nassau County Legislature approved a $230,000 grant, awarded to the group two years earlier by the County Office of Housing and Urban Development.

“We had a hard time wrapping our heads around this whole process,” Siler said. “It’s new. It hasn’t been done here in Nassau County.”

Cook lived with the Silers for a year and a half while her Cape-style home was gutted and remodeled. The renovation included construction of a second story, where Ryan and McManus now live.

Noting that she took $30,000 from her own credit line to help finance the project, Siler said that Seaford residents have shown overwhelming support for the project. Local businesses Napoli Marble & Granite Design, A Charmed Life, Gino’s of Seaford and Stop & Shop donated money or household items, along with Home Depot, Bob’s Discount Furniture and the United Way.

Michael Simmons, a Boy Scout from Troop 351 and a senior at Calhoun High School in North Merrick, helped renovate the house as his Eagle Scout project. Simmons built an 8-by-8-foot shed in the backyard, and raised money for household appliances. “I read the article about Karen’s Hope in the local paper,” Simmons said, referring to a story he saw in the Herald, “and I thought it would be a great idea for my Eagle Scout project.”

Hofstra University students also volunteered to clean up the property. Siler said she was overwhelmed by the community’s generosity, as well as the stories that people shared with her about their relatives or friends who are living with disabilities.

“Unfortunately, everyone knows somebody with autism or some sort of disability,” Siler said. “I don’t know how many people truly understand what the adult world looks like for them. Where are they going? What do their futures look like?”

The Karen’s Hope House, two doors down from Siler’s own, is not a group home. Cook, Ryan and McManus all go about their own lives, and staff members visit periodically to help the two young men.

McManus was born and raised in Seaford, and works at Stop & Shop on Merrick Road. Ryan works at Gino’s. Siler said that the living situation benefits the young men because it enables them to remain in their home community.

Cook said she enjoys living with Ryan, whom she watched grow up. Ryan, who audited a class on Eastern religions at SUNY Old Westbury last year, has said he wants to be a priest. Siler said that he has already written his first sermon, and that she bought him religious picture frames and decorations for his new room.

Cook said she also has wonderful conversations with McManus, who jokingly tells her to “stay out of trouble” before he goes to bed.  “It’s fun having them here,” Cook said. “It also means the world to me to continue living in this house, which has been in my family for 50 years. This house is going to help people for many years. I’m proud that my house was the first [Karen’s Hope House].”

“I want to help other families be creative,” she said. “My job is to help parents think about whether or not it’s important for him or her to live with someone, in the city, in the suburbs … We have to figure all of these things out.”