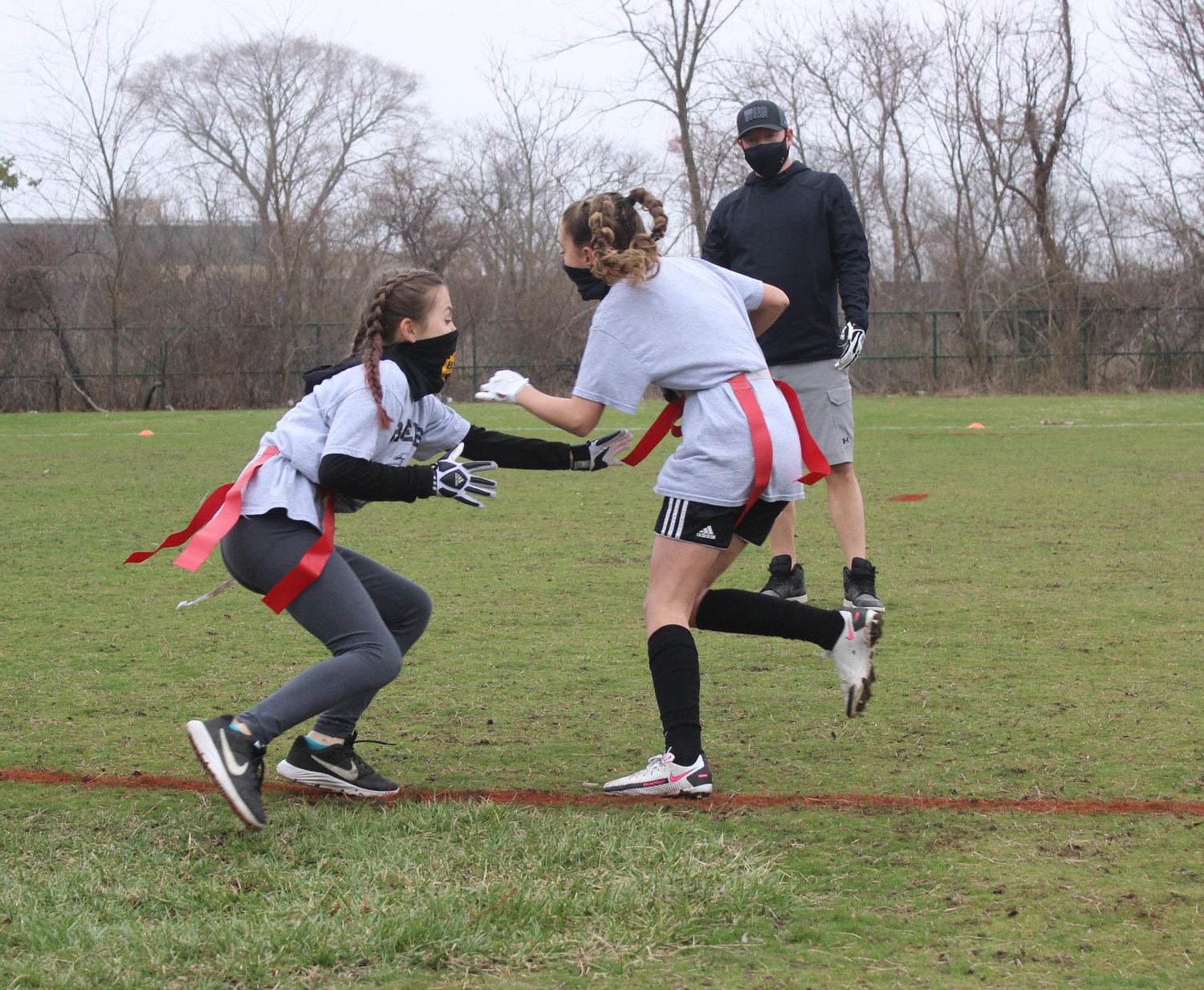 The first all-girls team in the HTB Flag Football League practiced at Cedar Creek Park on March 25, with Assistant Coach Bobby Burgess leading them through drills. Above, Juliet Roth and Kelly Harrington attempted to pull each other’s flags.
Brian Stieglitz/Herald 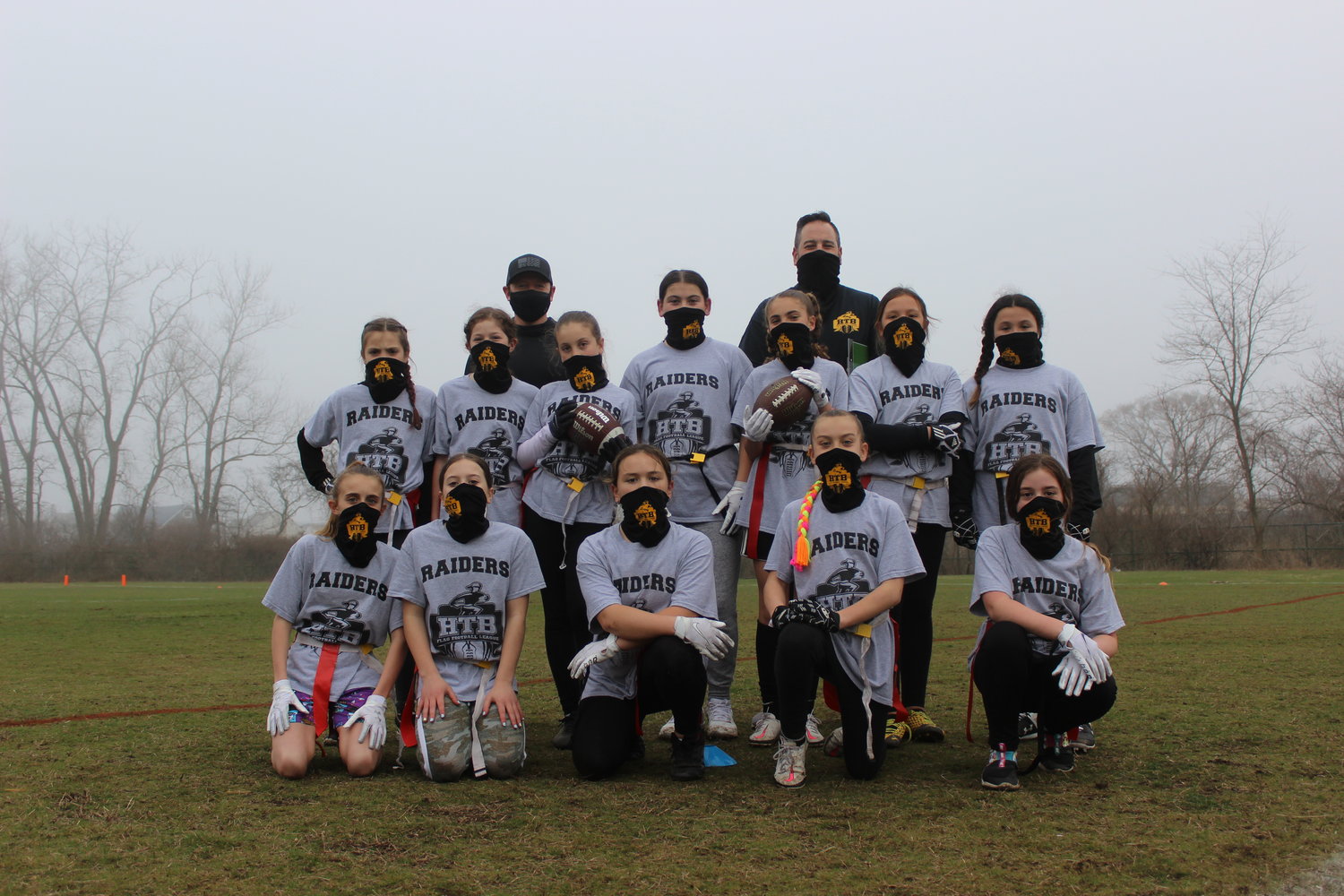 The team competes in HTB’s sixth-grade division, and includes some fifth-grade students from the Seaford Harbor and Manor elementary schools and some sixth-graders from Seaford Middle School.
Brian Stieglitz/Herald 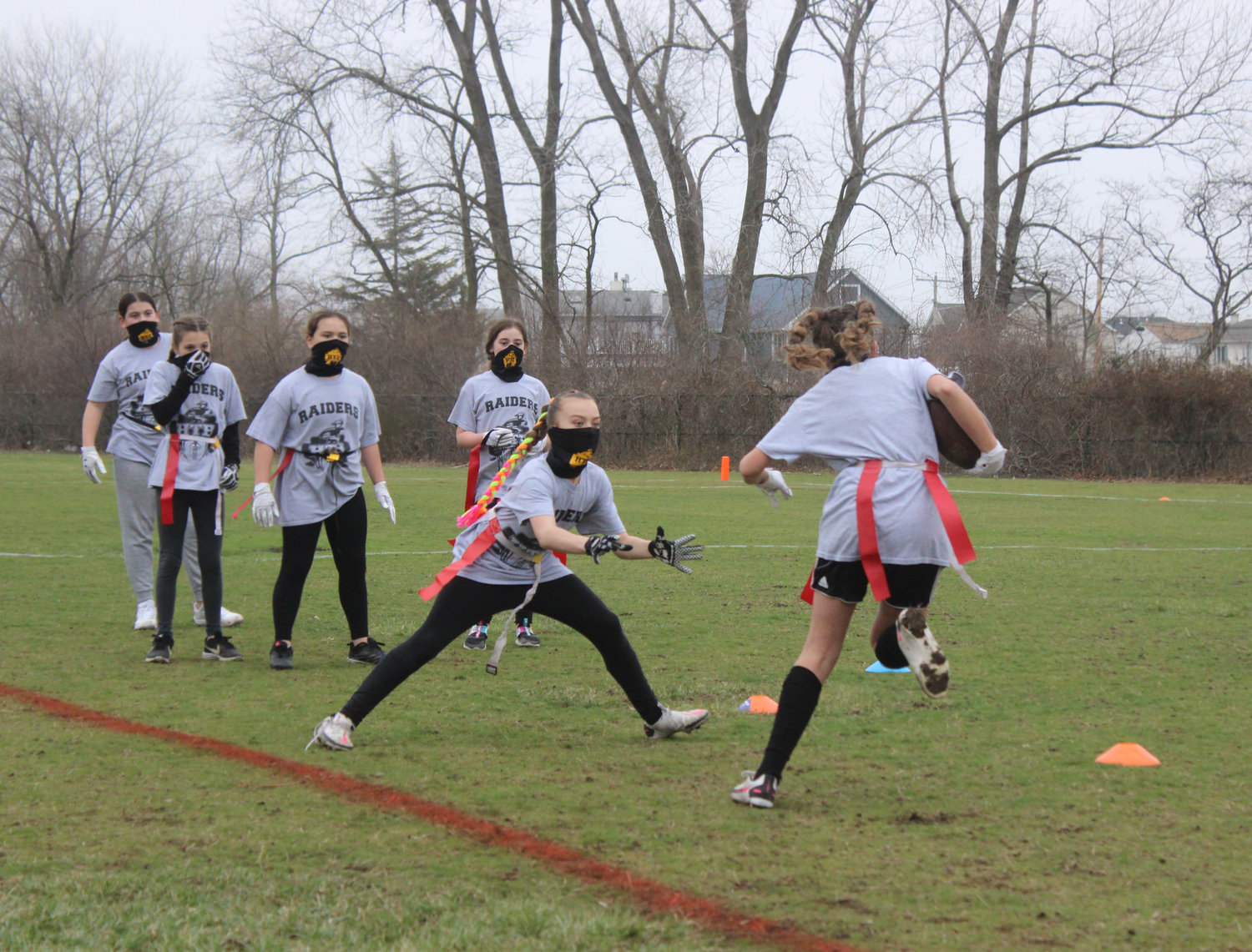 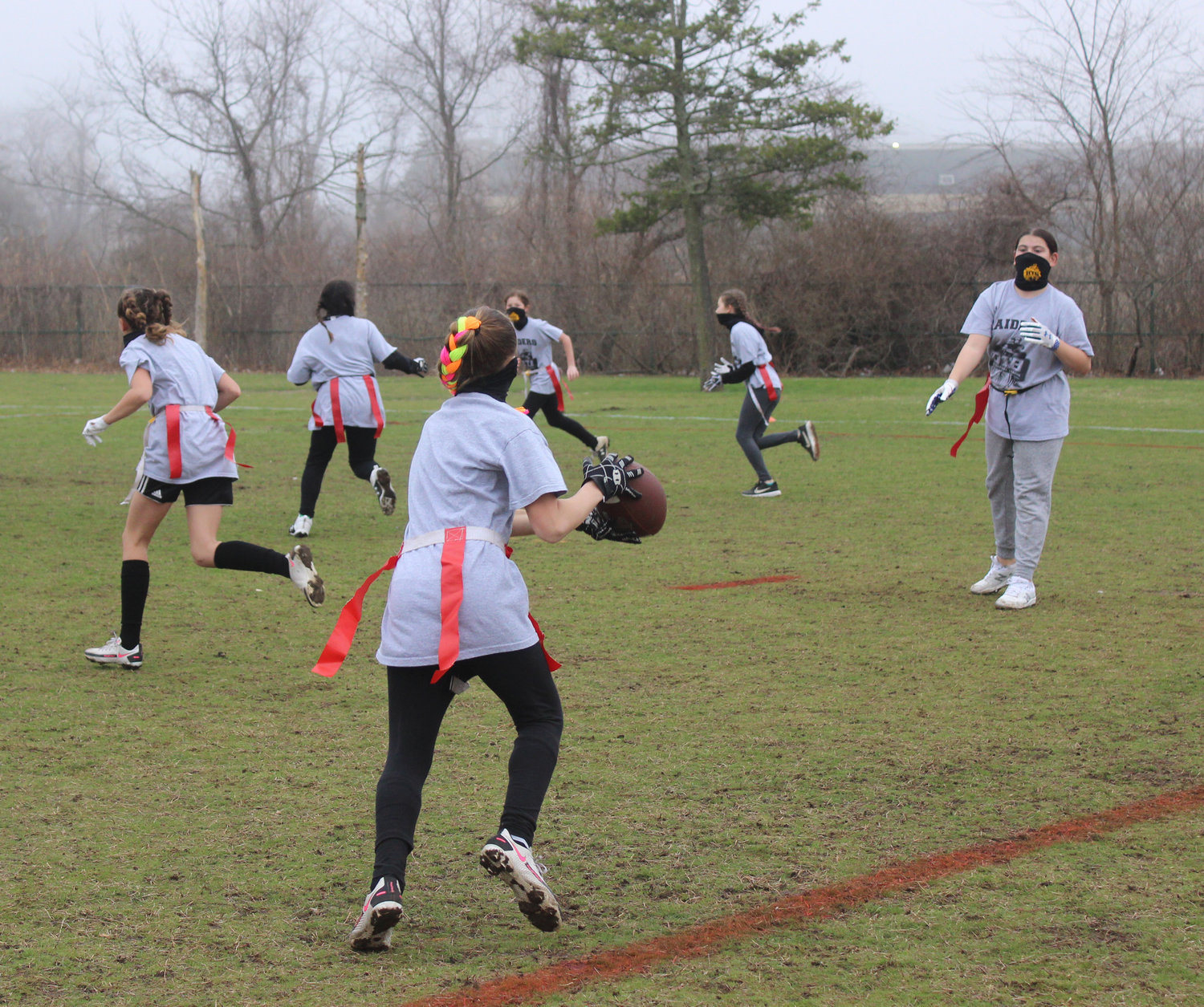 Five girls raced down a field at Cedar Creek Park as five more trailed them. “Watch Bella!” one shouted as another threw a football overhead and a girl with a rainbow braid jumped and caught it.

“Great job, Bella! You used your spider fingers,” her coach hollered as she raced down the field, followed closely by another girl who tried to grab one of four flags dangling from a belt around her waist. But Bella Doering outran her and crossed the goal line as her team cheered.

“This is our fierce group of warriors,” head coach Michael Betz as he introduced this Herald reporter to the fifth- and sixth-grade athletes competing on the first all-girls team in the HTB Flag Football League.

The league — opting for HTB, as opposed to the no longer accurate Hometown Boys — is a Seaford-based youth flag football league that accepts athletes from across Long Island and New York City.

“You don’t know how many seasons I’ve wanted us to have an all-girls team,” League Administrator Mickey Leahy said. “They’re here to show these boys that girls can be just as good as boys, if not better. They go out every weekend and compete against the boys’ teams.”

“And they have heart,” added league Commissioner Wayne Raso, of Bellmore. “They’re passionate. Sometimes you see a few boys snicker, but that all stops once they get on the field and start playing.”

Raso explained that flag football is all about speed and agility rather than physical strength, so boys don’t have the typical unfair size advantage that would be beneficial in tackle football or other contact sports. “It doesn’t matter if they’re male or female here,” he said. “A good athlete is a good athlete.”

HTB, which formed in 2003 under the late John Marshal, a coach from Bellmore, accepts students from kindergarten through high school. When Marshal died unexpectedly on Feb. 1, 2017, his son, Brian, inherited the league and transferred the title of commissioner to longtime coaches and family friends Wayne Raso and his brother, Roger.

League play was interrupted by the pandemic, but it restarted — slowly — last July, with a few teams still hesitant to return to comptition, Leahy explained. Last fall, however, when school started but school sports were on hold, teams returned, and new ones formed.

“We kind of exploded from there,” Leahy said. “Everyone’s been doing their part to stay safe, and we strictly enforce mask-wearing and social distancing.” He added that they haven’t had any issues enforcing pandemic guidelines, and the league has its own neck gaiters, which are given to anyone who doesn’t have a mask.

The girls’ team, coached by Betz, of Seaford, plays in the sixth-grade division, where every other team is all boys. So far, the girls have won one of four games, but the three losses were close, and the girls fought hard, Betz said.

“Last week, Kelly [Harrington] broke an inside run and made it through half [the other] team,” Betz said. “”Someone pulled her flag right before the end zone, but I was so proud of her.”

Betz started coaching his son’s flag football team during HTB’s fall season, but his daughter, Riley, also wanted a chance to play, so she organized a group of friends from the two other sports she competes in: Wantagh/Seaford PAL soccer and Seaford Little League softball. The girls began playing in HTB’s current season, which began on Feb. 27.

“This is a fun, easygoing experience for them outside of the other sports they do,” Betz said. “And they’re actually pretty amazing.”