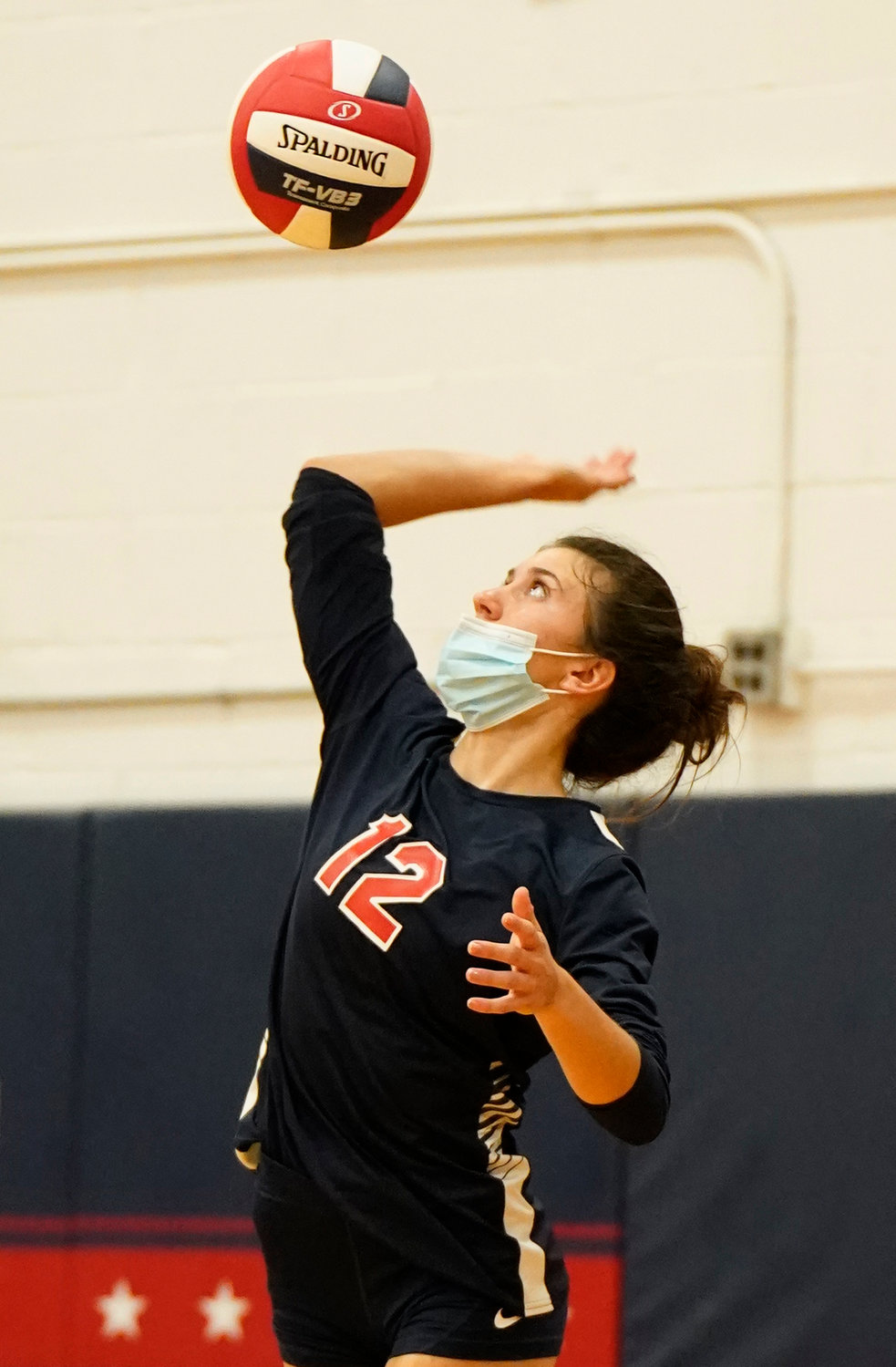 Senior Sofia Migliore is one of MacArthur's captains and racked up 18 assists last Friday as the Generals improved to 14-1 overall.
Ron Manfredi/Herald
By Andrew Coen

The MacArthur girls’ volleyball team is hitting the home stretch of the season within reach of a playoff berth.
The Generals entered the final three matches on their schedule nearly perfect at 12-1 in Conference A/C5 tied with Great Neck South atop the league standings. Only one team from the conference makes the postseason with that spot likely to come down to MacArthur’s regular season finale in Great Neck.
“We lost to Great Neck South last season to take us out of it so it gives them more fire to beat them this year,” said 14th-year MacArthur coach Diann Sciulla referring to the Generals falling in a tiebreaker match to just miss the postseason in the delayed 2020 season held in the spring. “The first time we played them we beat them in three seats and we’re looking forward to playing them again.”
MacArthur swept Great Neck South on Sept. 22 by set scores of 25-19, 25-18 and 25-14 led by senior outside hitter Ryan Murphy’s four kills and two aces. Senior setter Sofia Migliore was also instrumental in the first Great Neck South meeting registering three kills, nine assists, two blocks and four aces.
The Generals improved to 14-1 overall last Friday with a senior day 3-0 win against Valley Stream South by set scores of 25-11, 25-20 and 25-18 where Migliore recorded 18 assists and Murphy registered eight kills. Senior libero Jenna Cullinan also stepped up big with 10 digs in her final home match.


Murphy and Migliore, both captains, have served as team leaders for a veteran team that features eight seniors, many of whom Sciulla has coached going back to middle school. Junior middle blockers Joviana Bennett and Izzy Darold are also big forces in the lineup. Junior libero Ciara Herrera has also contributed in a key defensive role off the bench.
Sciulla stressed that the team is clicking well and off the court this year aided largely by a return to bonding activities like pasta parties that were restricted during the spring season due to the pandemic.
“The chemistry of the girls off the court has been the best it has been in my 14 years of coaching,” Sciulla said. “It has definitely played a big impact on the season.”
After facing Elmont this past Tuesday after press time, MacArthur will travel to Glen Cove Friday for a 4:45 p.m. match. Glen Cove handed the Generals their lone loss on the season with a five set 3- on Sept. 20.
The regular season concludes Oct. 26 at Great Neck South with a 5 p.m. start in a match that could determine who advances to the playoffs.
“The chemistry and communication will be important for us to achieve our goal,” Sciulla said. “The key for us this year is communication, which we have struggled with in the past and I think if we have that coming into Great Neck South we should walk out with a victory.”