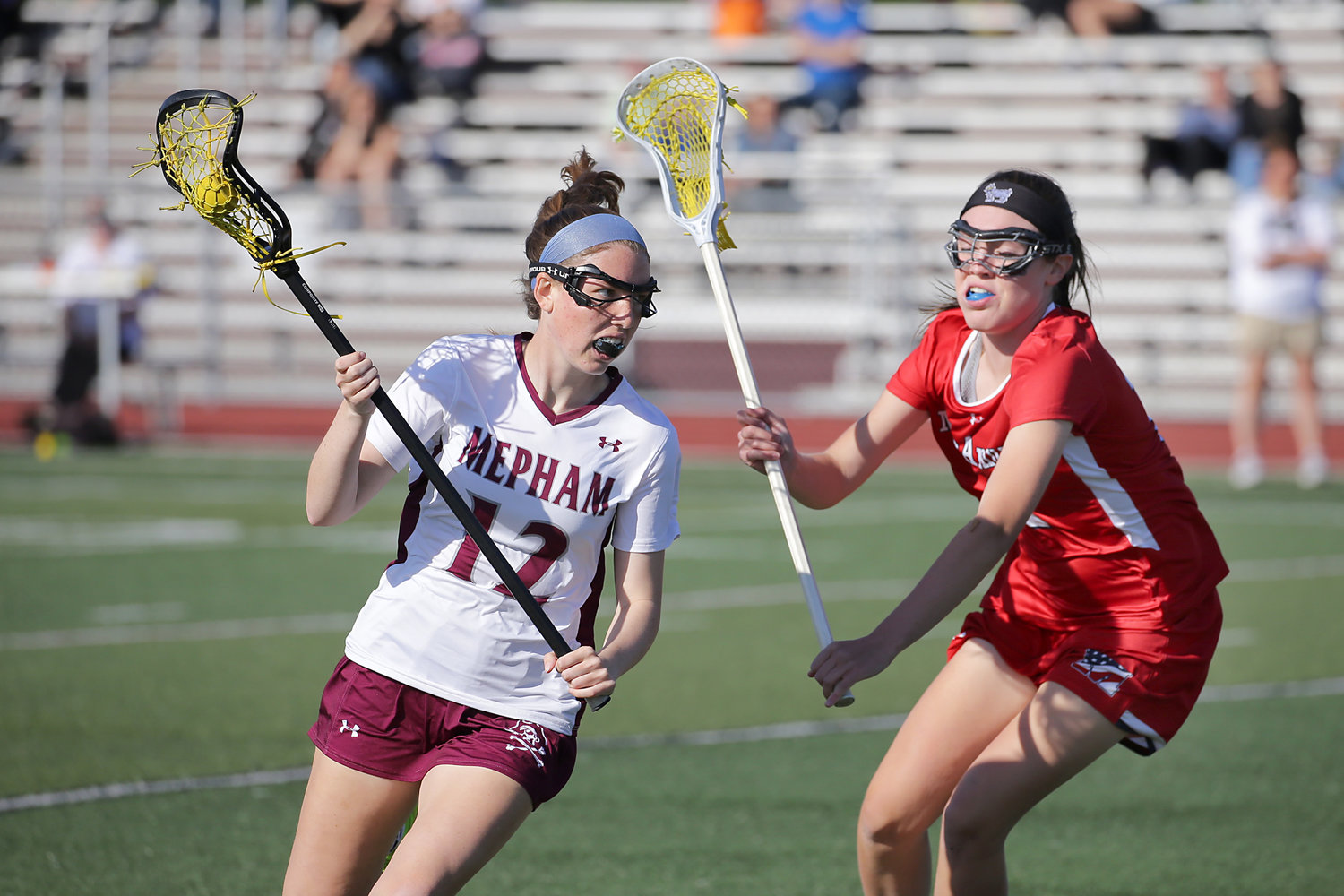 A banner year for Mepham girls’ lacrosse will continue with a trip to the Nassau Class B semifinals following its 10-2 victory over visiting MacArthur on May 18.

The fourth-seeded Pirates, with multiple freshmen, sophomores, juniors and seniors in their starting lineup, were sharp from the opening draw nine days after securing the Conference III title and built a 4-0 halftime lead.

Senior Kaitlyn Smith had four goals and three assists and controlled the draw circle, freshman Grace Skulavik had a hat trick and sophomore goaltender Catherine Chow made nine saves as Mepham (8-5) advanced to face top-seeded and defending county champion Garden City in the semifinals May 25 at Adelphi University.

“We’ve really bonded as a team and it shows on the field,” said Smith, who has 34 goals and 27 assists this spring. “We’ve been playing with a lot of confidence,” she added. “We were able to win our conference and now we’re pumped to go to Adelphi for the semifinals.”

MacArthur (10-6), which lost 4-2 to Mepham in a conference battle March 30, got goals from senior Kailee Coppola and junior Gianna Feniello, and 11 saves from senior goalie Giavanna Stamatelo. The Generals eliminated Carey 13-3 in the first round behind three goals apiece from Coppola, Feniello and eighth-grader Kayleigh Huggard.

“We’re a young team with only seven seniors out of 29 athletes and I just thanked those seniors for their leadership and mentoring the younger kids,” MacArthur coach Dan Agovino said.

“I’m proud of our team,” he added. “We have a bright future. We had a nice playoff win the other day but today we didn’t start off the way we wanted. Mepham is a good team that played well and deserved the victory.”

Skulavik opened the scoring 2:38 into the game off an assist from junior Quinn Schroeder and the Pirates never trailed. Much like the regular-season matchup between the teams, goals were difficult to come by. It remained 1-0 for more than 10 minutes before freshman Leah Smith doubled the advantage. Kaitlyn Smith and freshman Sierra Barbosa added late first-half goals while a defense led by junior Madison Weber, senior Mia McElwee, sophomore Olivia Meyer and junior Markella Moutafis prove tough to crack.

“Our defense has been amazing all year and it took us a little time to figure out the offensive chemistry,” Mepham coach Kristen Mogavero said. “We had high hopes this season coming out of tryouts. We have some youth out there, but they don’t play scared. They’ve shown they belong.”

Skulavik opened the scoring in the second half to stretch the lead to 5-0 before Coppola got MacArthur on the board with 21:01 remaining. The Pirates, who captured their first conference title since 2017, scored the next five with Kaitlyn Smith getting three and Skulavik and senior Sara Forchelli one apiece.

“We’re a pretty humble team, but today was our chance to show how far we’ve come since the last time we played MacArthur,” Mogavero said.