ODMaps to aid in fight against opioids 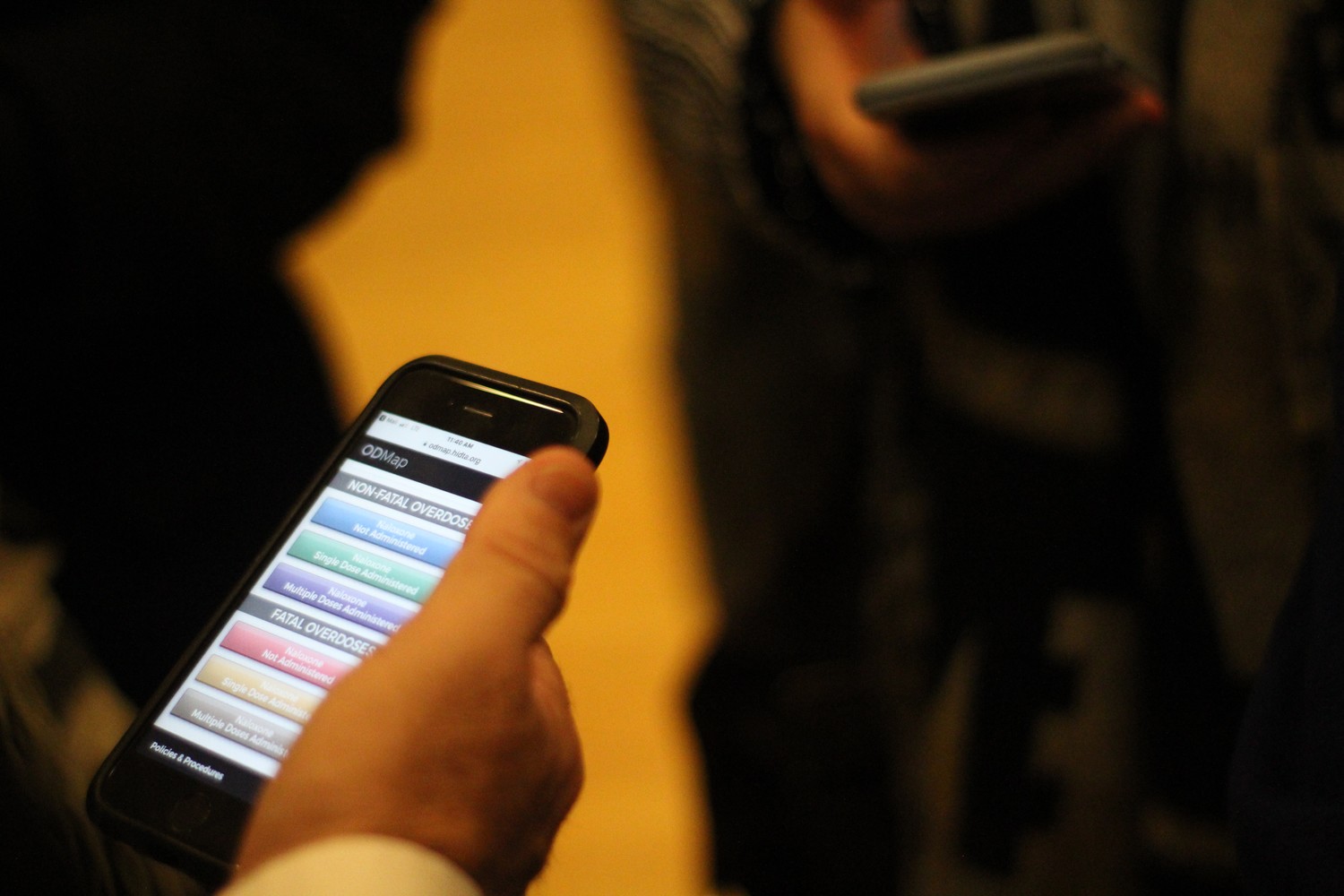 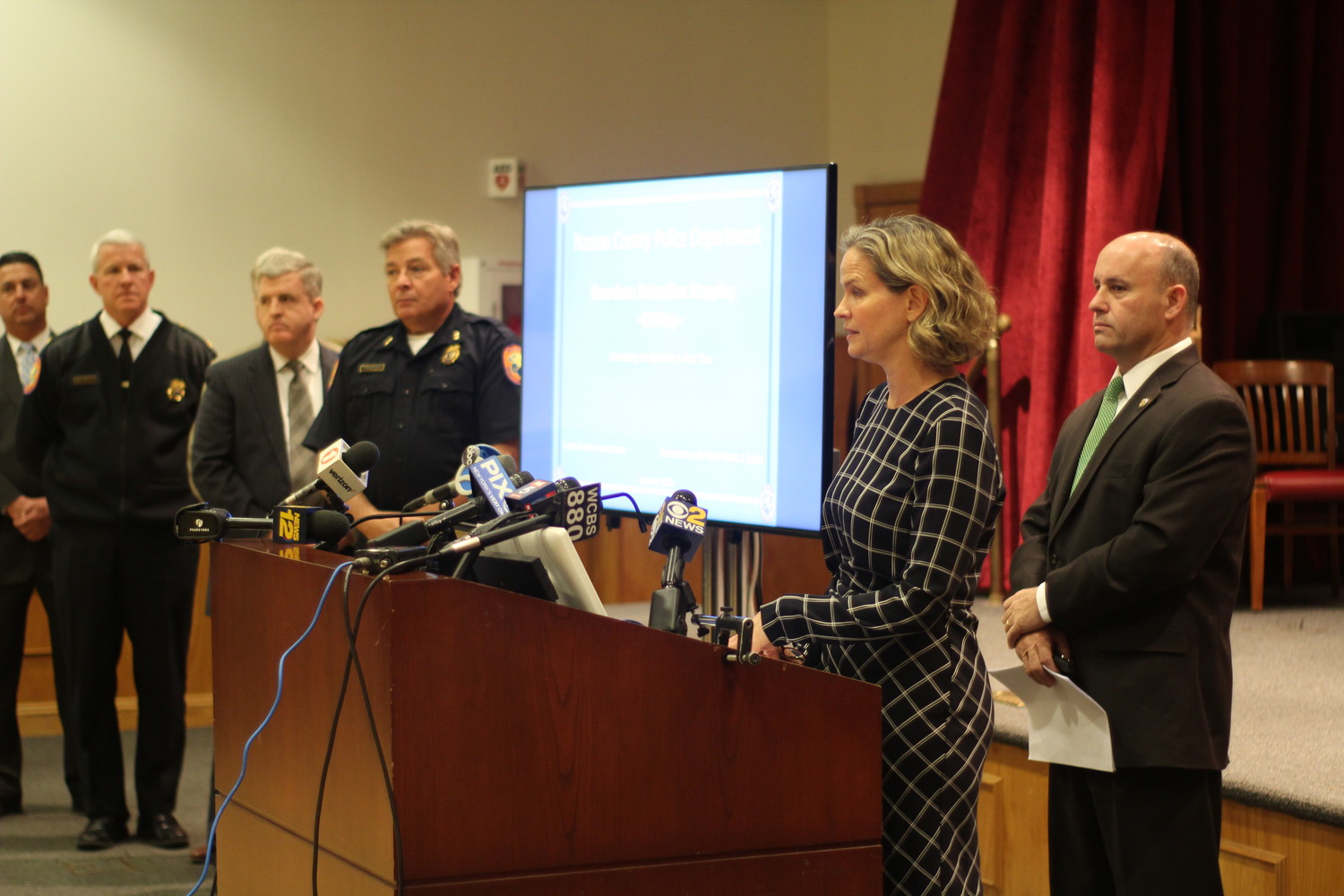 This is happening in everybody’s backyard. So we all need to be a part of this solution.”
Jamie Bogenshutz, Executive Director of the Yes Community Counseling Center
Step-by-step guide

- Arrive at scene of overdose and treat victim.

- Using on screen buttons, select one of the six descriptors that apply to the overdose, indicating whether it was fatal or not, if Naloxone was administered, and if so, in how many doses.

- OPMaps will automatically record the overdose’s location by using the first responder’s phone geo-location feature (this feature is also used in applications such as Maps and Snapchat).

- Survey virtual map of Nassau County, where pins of all overdoses are placed based on their location.

- Users will receive an e-mail alert of overdose spike (three to four overdoses in a one-mile radius over a 24 hour period).

- Act on overdose spikes, and overlay crime maps to investigate any correlation.

In 2017, Wantagh, Seaford and the surrounding communities of East Meadow, Levittown, Massapequa and North Bellmore had 29 total fatal overdoses and 204 non-fatal overdoses, according to the Nassau County Police Department.

Last month, 11 overdoses occurred across those same six communities, with one of those overdoses being a fatal overdose in Massapequa.

While the fight against opioid overdoses is ongoing, ODMaps, a new application that officially integrated into the NCPD on Feb. 1, will give the police another tool to fight future drug overdoses in real time.

At a recent news conference, Curran and Police Commissioner Patrick Ryder announced the application’s debut in the force, and said that the software is a widely used application in law enforcement departments across the Eastern United States.

Through ODMaps, a first-responder will update the application’s virtual Nassau County map with information about where an overdose took place, its lethality, and if the overdose-reversing drug Nalaxone, which is also identifiable by its brand name Narcan, was used in the first response. Ryder said that as the map is updated in real time, he and the rest of the police force will monitor it for any overdose patterns.

“If there’s three to four overdoses in a one to two-mile radius in a 24-hour period,” Ryder said, “we’ll get an email on our phones alerting us that we have overdoses.”

Police will also layer crime maps onto ODMaps in order to find correlations between crimes and overdoses, and use a combination of enforcement, education and local community group involvement to prevent future overdoses and crime.

“We’re looking to get a solution to the problem,” Ryder said. “And by going after this and mapping the ‘hot spots,’ it will allow us to then focus on the people that need to be arrested — the dealers and the sellers — and at the same time, get a reduction of our crime in the area.”

Even though a dealer may be far from an overdose hot spot, Ryder said that the cooperation of arrested overdose victims will be vital to stopping dealers, as well as future overdoses and crime, across the county. Ryder also stated that the department will work across county and state lines to prevent overdoses in the county.

Police will also coordinate their efforts with community organizations, such as the Yes Community Counseling Center and the Levittown Community Action Coalition, in order to fight overdose issues on the local level.

Stephen Grippi, the Wantagh-Levittown Volunteer Ambulance Corps chief of operations, explained that when a victim overdoses, the emergency call is not usually for an overdose, but rather for breathing issues or unconsciousness.

“When people look at the numbers from dispatch information,” Grippi said, “they would not represent the true number of overdose calls we receive.”

The WLVAC, which covers parts of North Wantagh and Levittown, was founded in 1956 to help aid residents in emergency situations. The members of the organization are trained in both in CPR and paramedic care.

Grippi said that the app will give first-responders accurate data to back up their general knowledge of where overdoses usually take place, and help his corps determine their plans for future community education.

“The data generated through ODMaps could help target problem areas and increase enforcement on the law enforcement side,” Grippi said, “as well as give us an area to focus our own programs, such as community Narcan training.”

Dr. Jamie Bogenshutz, executive director of the Yes Community Counseling Center in Massapequa, said that ODMaps will lead to more frequent and effective communication between the police, community members and treatment agencies. The more information the police can receive from overdoses, the better that they can relay that information to coalitions and community organizations such as the counseling center.

“There’s a terrible tendency to say that, ‘This isn’t happening in my backyard,’” Bogenshutz said. “So with that information, we’re able to help people to understand that, ‘No, this is everybody’s problem. This is happening in everybody’s backyard.’ So we all need to be a part of this solution.”

The YES Community Counseling Center has joined forces with the Levittown and Massapequa community coalitions to help join the fight against opioids. Both coalitions already use community mapping to identify where overdose spikes occur.

“With that information,” Bogenshutz said, “it allows us to promote the healthy spots — the spots where kids can go to be safe and be protected.”

Bogenshutz said the overdose problem will not be fixed from one effort or application overnight, but it can be reduced, and one day solved, if there is full collaboration between all community members.

“It’s not going to be one person, organization or entity that is going to make this better,” she added. “It’s about everyone working together, from parents to government and everything in between.”