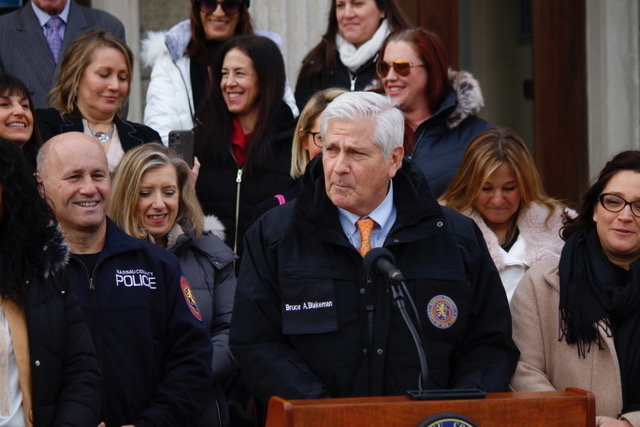 Nassau County Executive Bruce Blakeman signed an executive order Thursday which requires the Wantagh and Seaford school districts, and all other Nassau districts, to vote this month on whether to require masks in classrooms.

School boards must vote "to determine whether or not parents and children should be granted the constitutional right to reject mask mandates while in the classroom,” the executive order drafted by the county executive’s legal counsel stated.

The orders continue: “Given the historical data on Covid-19 and the ongoing debate over whether masks are more harmful than beneficial to children and to school environments in general, we should protect the freedoms and statutory rights of students and parents by resting with the parents the decision whether their children should wear masks in school."

However, New York State Education Department Commissioner Betty Rosa said that counties do not have the legal authority to require boards of education to vote on specific issues.

The newly appointed executive also announced Thursday that he would lift the mask mandate for all county agencies.

"School boards are composed of elected officials who make decisions based upon the unique circumstances of each District,” Blakeman said in a press release. “They are in the best position to make these decisions, not an autocracy in Albany."

In Wantagh and Seaford, parents have already responded to the order. Some parents are in support of the decision to unmask children in schools, including Seaford resident Matthew Roberts. In a statement, he said he’s “very thankful someone like Bruce Blakeman is finally standing up to Gov. Hochul.”

“These poor kids are going on almost now a third year of having to wear these masks. It’s not right. Selfish adults and power-hungry, overbearing politicians get to enjoy their lives, while children who are the least affected by this virus suffer the most.”

Wantagh resident Daniela Gallina, who has two daughters in Wantagh Elementary School, said they have advocated for parental choice – meaning parents are able to choose if their children wear masks in the classroom.

“My daughters love school and their teachers, but unfortunately another year in masks is making them frustrated and not wanting to go to school,” Gallina said in an emailed statement. “We are praying that our superintendent and Board of Education make the right decision and allow parents to make the decision for their own children. It's time we learn to live with this virus and allow our children normalcy again.”

The parental choice movement has grown exponentially in Wantagh mainly over social media platforms like Facebook. The Facebook group, formed in July 2021, currently has over 750 members.

Local resident Judy Kudysch Kule made reference to the movement. She said: “Choice is fine in situations where your choice only affects you, but that is not the case here. Seatbelts would be an example of laws made to protect you. Seatbelts also don’t save lives in 100 percent of car accidents, but most of us wear them, because, in many cases, it does save lives.”

Other parents expressed some concern about the potential safety hazards that could arise if school boards do not mandate masks.

“I am a senior citizen and have no more children in school, but I did work in a school and feel as though the kids need to mask,”  Rosemary Johnstone of Wantagh told the Herald, “to protect the teachers and staff, and from each other.” Johnstone added that the community needs leadership, and the decision to have children masked should not be left up to each individual.

Many school districts, including neighboring Bellmore-Merrick Central High School District, are conferring with their legal counsel and will await further clarification from the Governor's office and the New York State Department of Health regarding the order.

Blakeman also announced that 20,000 test kits would be distributed at Tobay Beach for county residents who live south of Hempstead Turnpike, and at Eisenhower Park for those who live north of the turnpike on Saturday, Jan. 8 and Sunday, Jan. 9, from 8 a.m. to 1 p.m. or until supplies last. A vaccination pod is expected to be set up this weekend at Nassau Community College from 10 a.m. to 3 p.m. by appointment only.

The county is expected to distribute KN95 masks to private and public schools staff ​​and faculty.

The Wantagh and Seaford School Districts did not respond to a request for comment before press time.