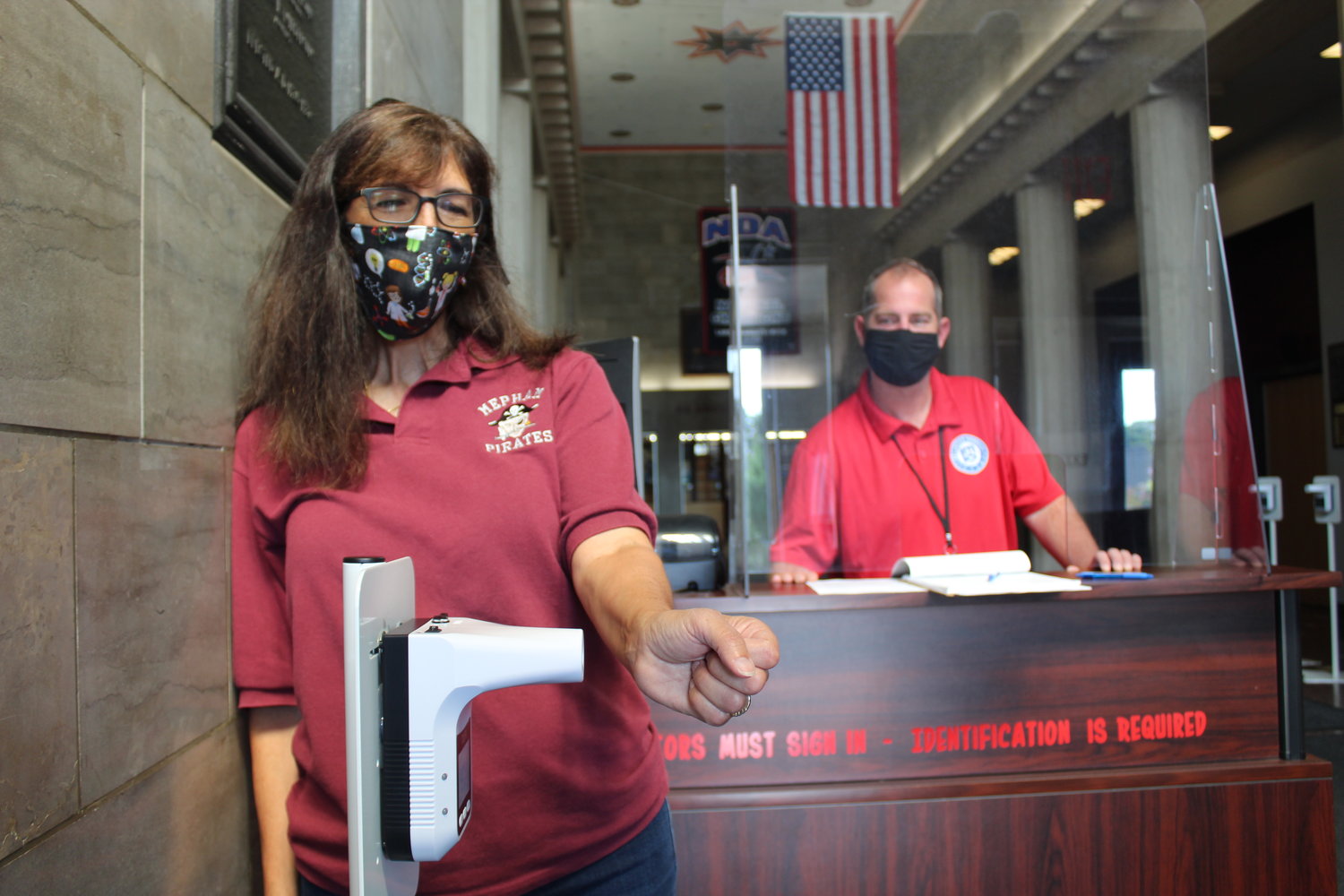 Mepham High School science teacher Josephine Parlagreco got her temperature taken with an infrared scanner upon entering the building as Jim Lavin, a security aide, looked on from behind a plastic barrier.
Alyssa Seidman/Herald Life 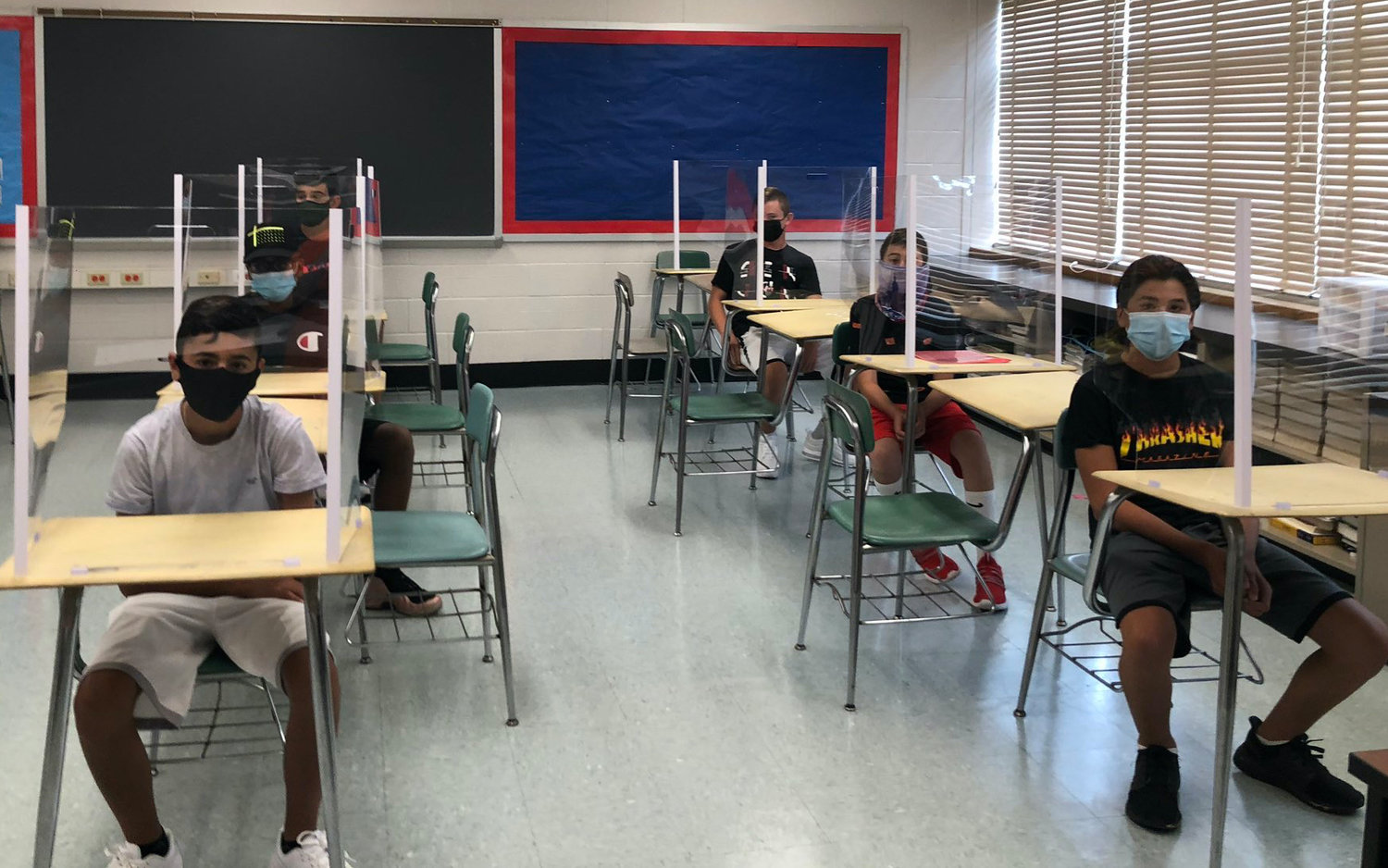 Before the first day of school, rising seventh graders visited Kennedy for freshman orientation. The students sat at every other desk to stay socially distant.
Courtesy Gerard Owenburg via Twitter 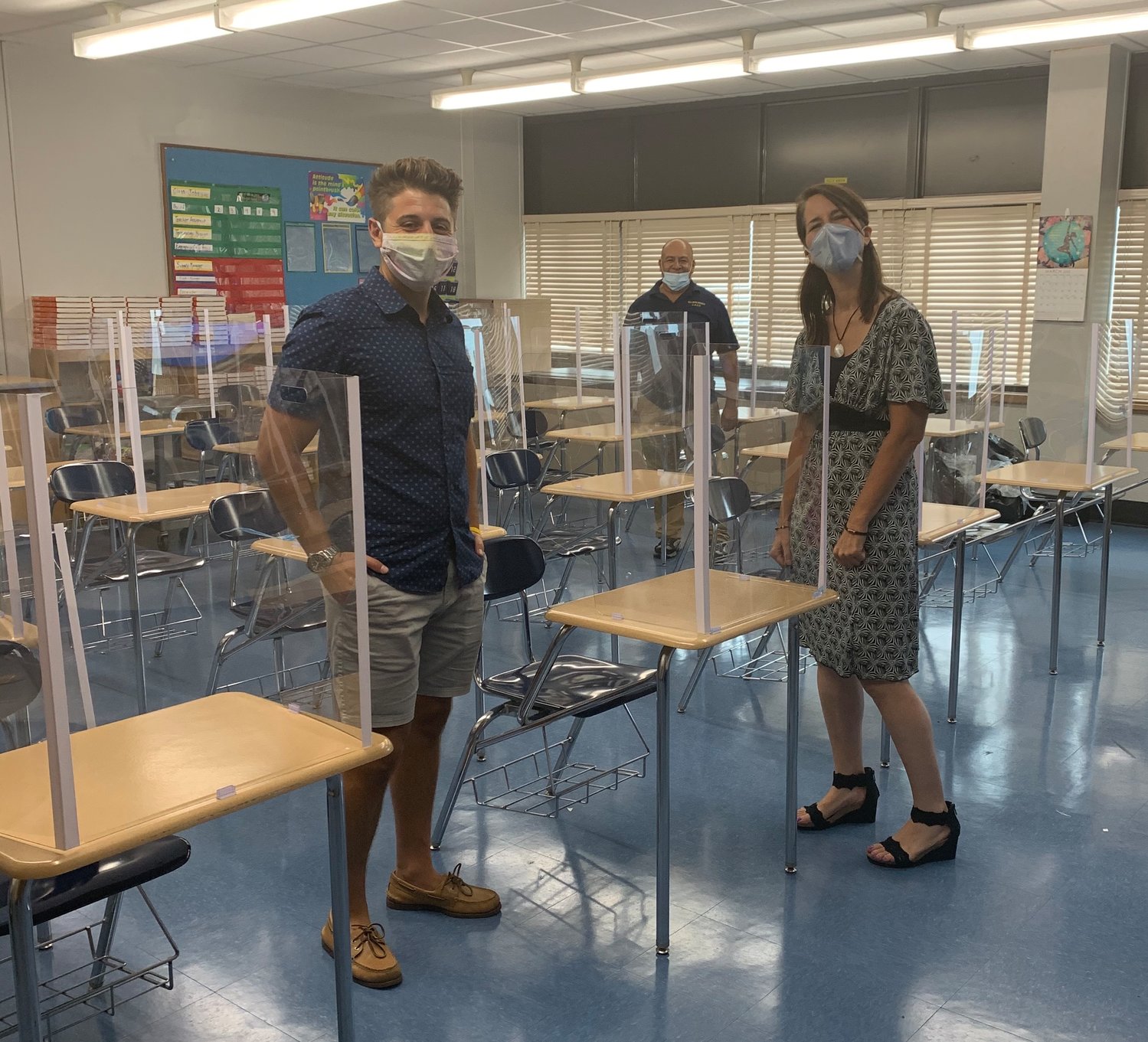 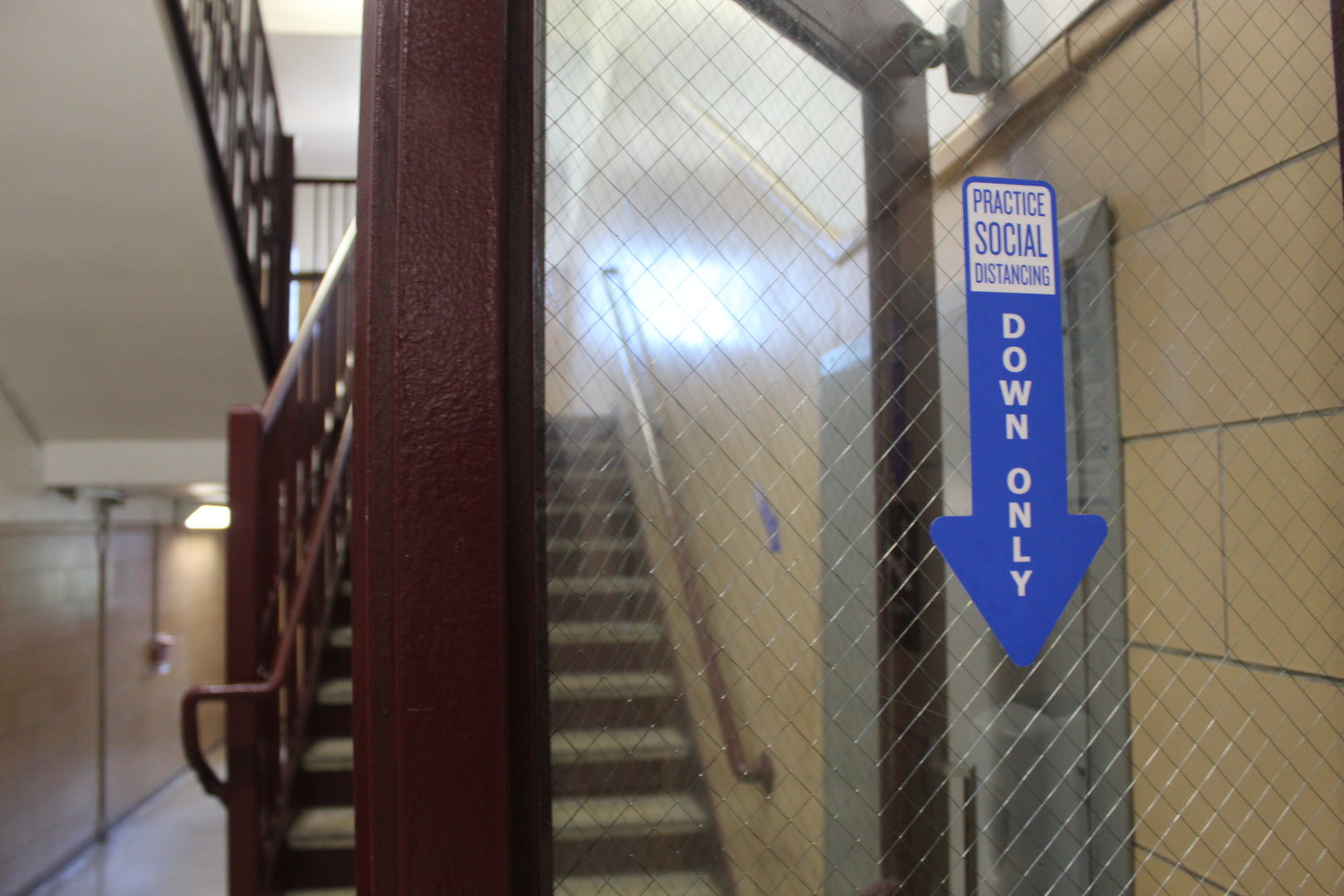 To keep crowding to a minimum, stairwells in Mepham High School are designated as either up or down.
Alyssa Seidman/Herald Life 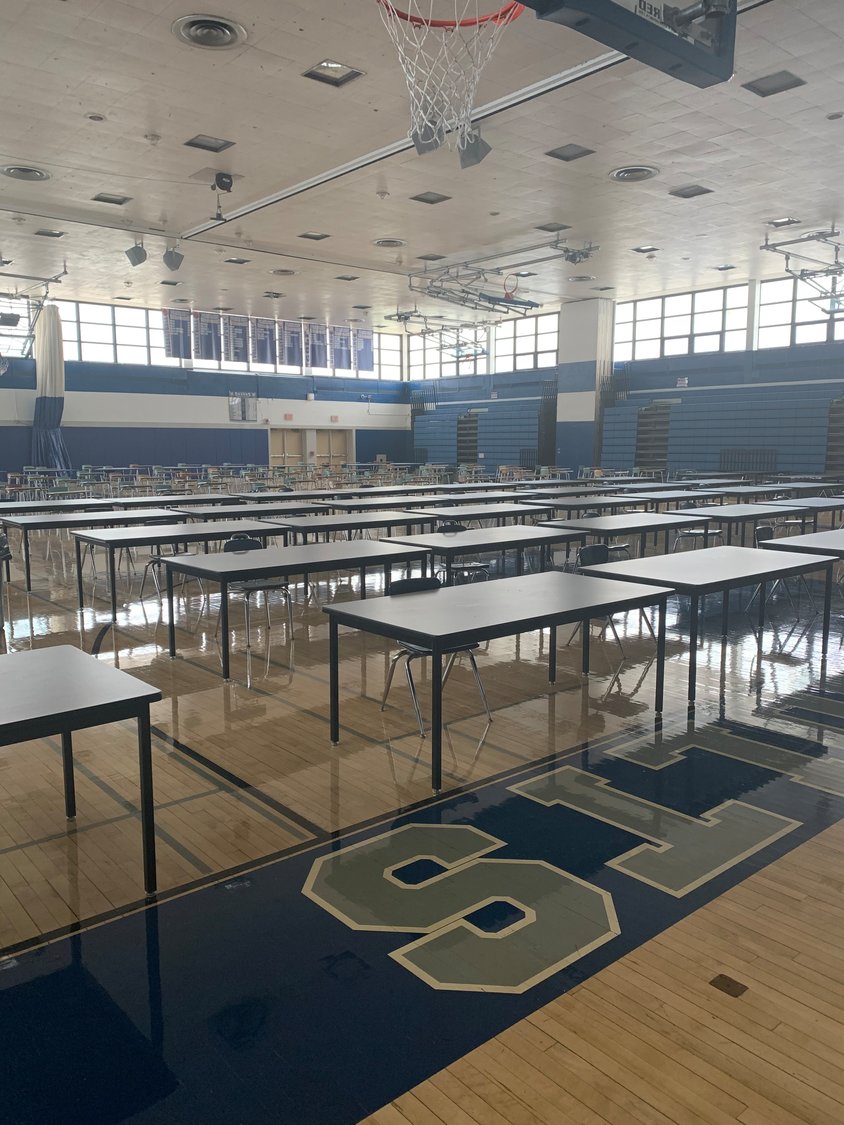 The gymnasium at Calhoun High School has been transformed into a cafeteria to ensure students are staying six feet apart during their lunch period.
Courtesy Nicole Hollings 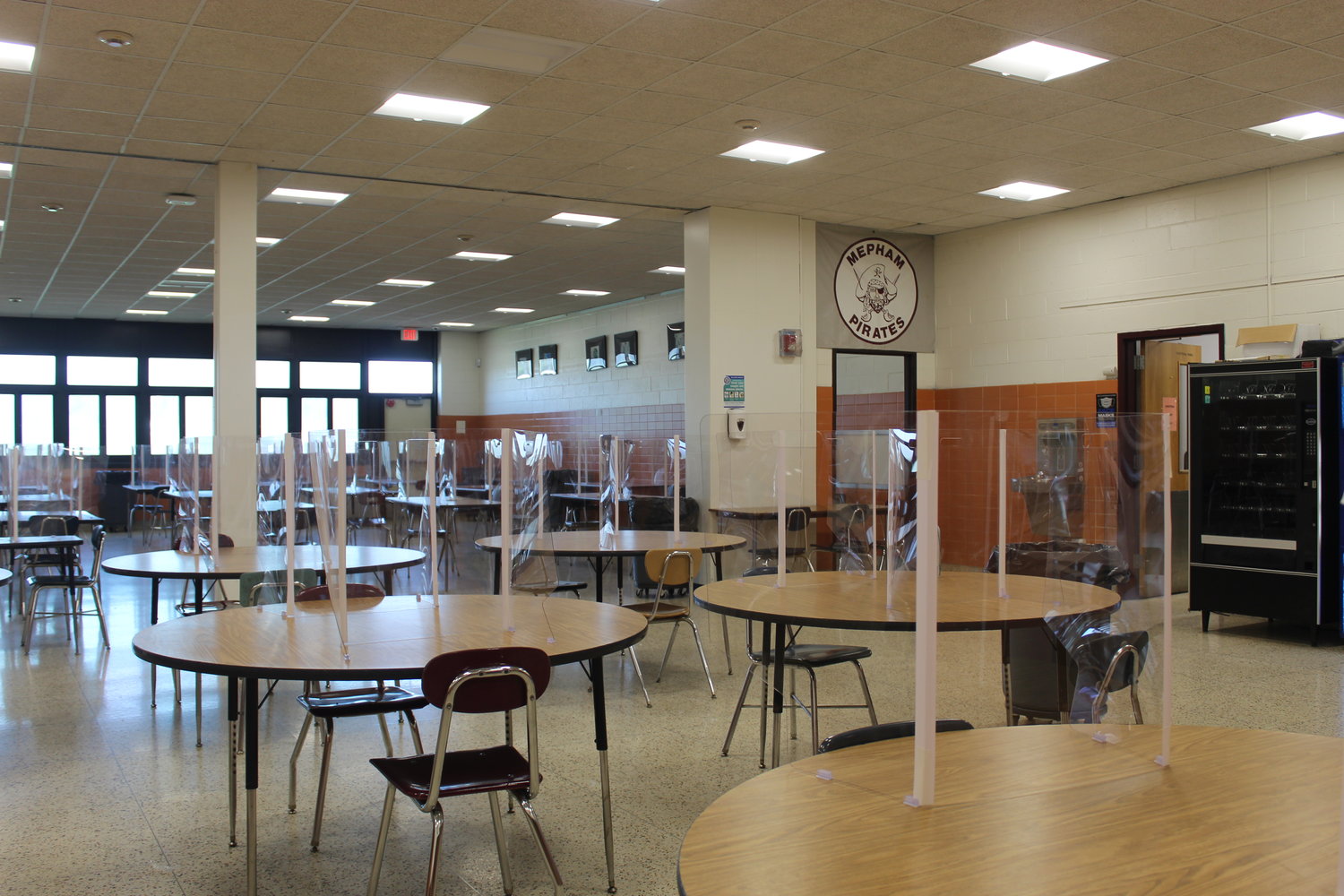 At Mepham, students can sit two to a table during lunch since each table is affixed with plastic barriers.
Alyssa Seidman/Herald Life
Previous Next
By Alyssa Seidman

Students and staff in the Bellmore-Merrick Central High School District will return to school on Sept. 8. For some this will mean logging on to a computer for a designated day of remote learning; for others it will mean stepping into a school building for the first time since March; but for everyone involved, the first day of school marks the beginning of an unprecedented year ahead.

The Central District will operate under a hybrid learning model — in which students alternate between in-school and remote classes — for the first two weeks. The goal is to eventually ease into full in-person instruction as teachers, students and staff adjust to new safety protocols.

“Our whole being is wanting to support kids academically, socially and emotionally, so starting with half the population will help us get used to protocols and procedures,” said Calhoun High School Principal Nicole Hollings. “The model that we have going forward is the best model we can have — now we have to actually do it.”

If routines are perfected and it is safe to do so, the district has a tentative full in-person reopening date slated for Sept. 21. The final decision on a full reopening will be made by Sept. 16.

The Herald Life got a glimpse inside the district’s three high schools to see what students would encounter when going back to school in the time of Covid-19.

Students districtwide will have their temperatures taken with a contactless infrared thermometer upon arrival. Instead of mingling with their friends in the hallways, they will wait in “distancing centers” — either a gymnasium, cafeteria or auditorium — before first period to “limit crowd-gathering,” Mepham Principal Eric Gomez said. On their way to class, students will follow blue directional arrows placed throughout the buildings, which are intended to maintain a two-way traffic flow in the halls and a one-way traffic flow, either up or down, in the stairwells.

In the classrooms, desks and chairs are spaced out as far apart as possible. Each desk is equipped with a three-sided plastic barrier, and students are required to wear masks during class. Once the period is over, students will be dismissed to their next class one row at a time.

In the cafeterias, tables are spread out six feet apart and come equipped with plastic barriers, as well. Custodians have also set up individual tables and desks in the schools’ gymnasiums to allow students to eat there if needed.

Clubs will not meet during the first two weeks, but the principals said they would work with advisers to assess how those activities could be held based on the model the district will follow for the rest of the school year.

Kennedy High School Principal Gerard Owenburg said he spoke with more than 100 students ahead of the first day to address any concerns they had about returning to the building. “The safe return of everyone is the absolute top priority, but we also want to try and preserve those traditions the kids look forward to,” he said. “All of the things that would normally be done, we have Plan A, B and C in place for.”

Hollings said the same of Calhoun’s On Tour Company, the magnet drama program that takes in students from Merrick and Bellmore. “The director Sal Salerno and I have plans to have performances and rehearsals . . . regardless of whether we’re fully back, hybrid or remote,” she said. “We want to keep kids engaged in whatever work they do and give them the ability to show their talents.”

Gomez said much of the feedback from parents in response to the hybrid reopening has been positive. He also commended his staff for being receptive to the new pandemic procedures. “Patience is a big word among anyone in education, and we will remain patient, positive and flexible,” he said. “Our primary goal is to keep people safe, and we will do our best to make that happen.”

While entering a classroom may be “shocking” this year, Owernburg said, he believes Cougar Nation is prepared to adjust to the new normal. “We’re going to learn from the mistakes that [students] made on and off college campuses and work our way towards a full reopening that the kids want,” he said. “‘Protect the den.’”