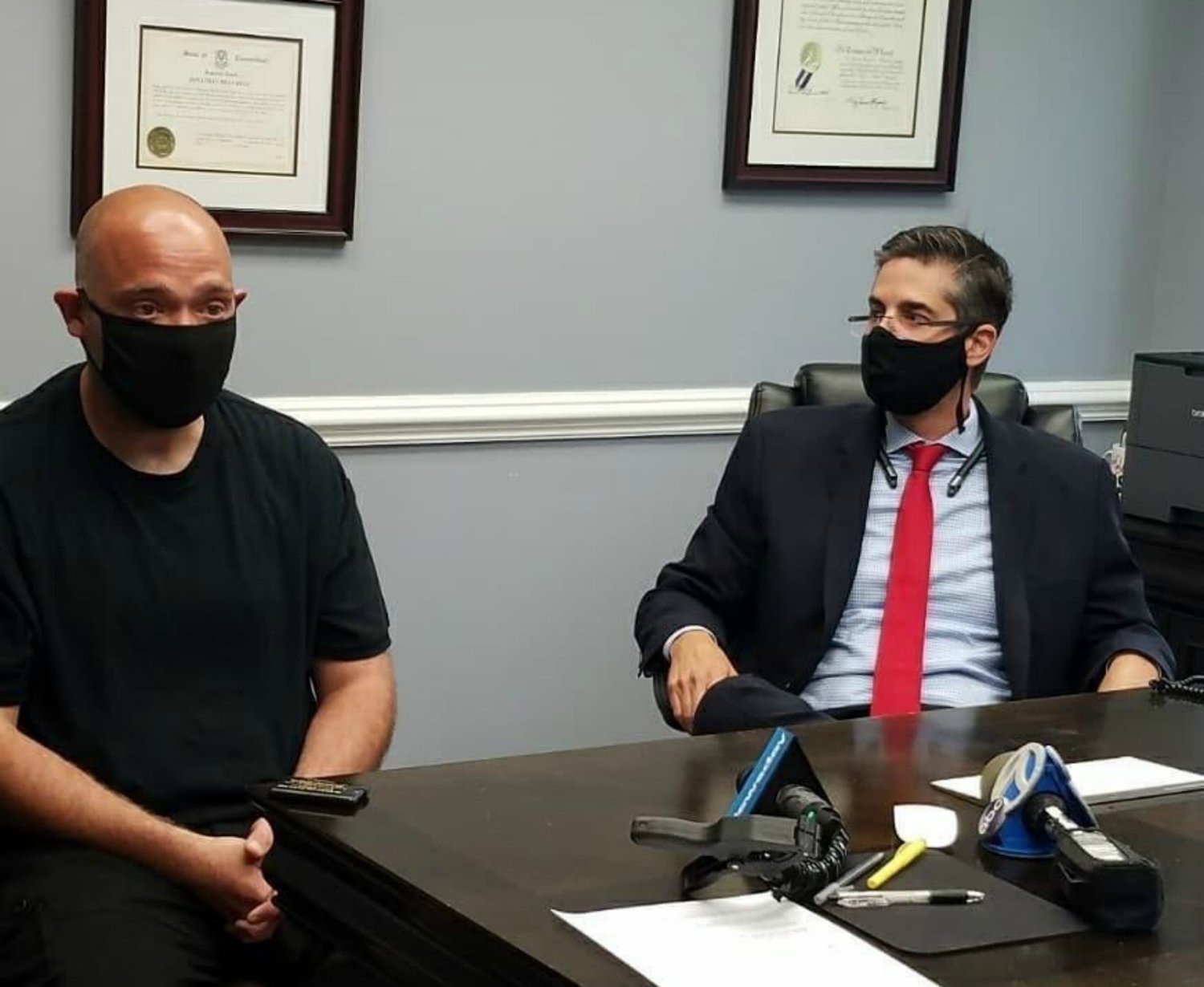 Thomas DeSarle, left, and Jonathan Bell of Bell Law Group participating in a press conference regarding an alleged incident at the Glen Cove Carvel where DeSarle was left without a job after refusing to take money from a customer who was not wearing a mask.
Courtesy Bell Law Group 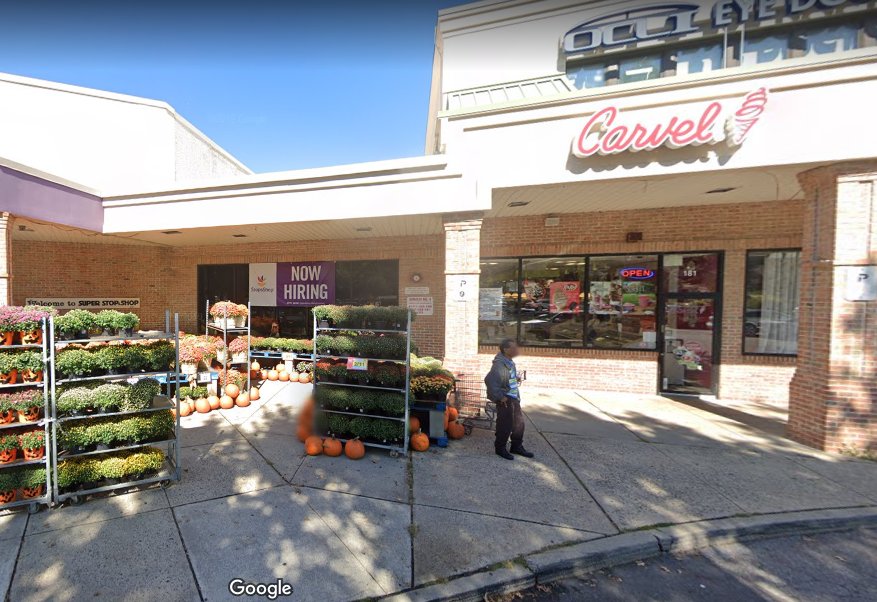 The Glen Cove Carvel has come under fire after an alleged incident where a manager was terminated for refusing to complete a transaction with a customer who wasn’t wearing a mask.
Courtesy Google Maps
Previous Next
Local reactions

“I think this is completely unfair. Stores have the right to refuse service, especially if this man was allegedly coughing all over. The manager did all the right steps, and to be let go seems completely unjustified.”

“Thomas has always been courteous and very accommodating to our family. I believe the owner may have made a hasty decision and was unaware of all of the facts involved, but I don’t believe she needs to be publically demonized like this. Obviously, she’s made prior good choices like hiring Thomas [DeSarle]. This Carvel will not lose my business, but it’d be heartwarming to see Thomas and the owner get together, resolve this and go back to their previous winning working relationship.”

“My husband and I basically go there three times a week, and when we heard about what happened, we stopped going. Couldn’t give my business to a company that treats its employees like that.”

“My son is 5 and goes to Carvel all the time. [Thomas DeSarle] is always so nice to him, and my son loves the gummy bears he always gives him.”

“I love Carvel, but I will not be going back because of this. He had his health and the health of other patrons to worry about. Shame on management. He is a nice and courteous man always. All of them are. Shameful.”

“A business that allows customers without a mask and coughing all over money? So what if my 70-year-old parents went in there, gave the cashier a 20 and got the 10 that the customer coughed all over as change? That’s a big no from me. It’s a mandate to wear masks in public places.”

Thomas DeSarle, of Locust Valley, is without a job after he refused service to a Glen Cove Carvel customer who was not wearing a mask as he coughed and paid with cash dampened with perspiration.

“He offered the customer a mask, and the customer refused,” said Jonathan Bell, of Bell Law Group, who is representing DeSarle in the alleged July 11 incident. “Tom went back to the owner of the store and asked if he had to serve the customer, and she said ‘yes.’ He then served the customer who paid with cash, using the same hand that the customer was coughing on, and the cash was wet from perspiration.”

DeSarle, as seen on CCTV footage aired by NBC New York, refused to take the money. And instead, according to Bell, DeSarle’s higher-up completed the transaction, and he was sent home that day.

Bell said DeSarle did not come in for his next shift the following Monday because he thought he was fired, when he received a call at 1 p.m. from the owner of the franchise, Annie Chen, asking him to come in. “So, he hurried up, because this was his only source of income. She was getting ready to leave when he arrived,” Bell said. “And she said in substance ‘promise me you won’t do that again. That if someone comes in without a mask that you will serve them.’”

DeSarle said no to this request, Bell said. “If he feels like his safety is in jeopardy, he’s not going to be serving the customer, and she said, ‘Well, if you are not going to promise me, you have to leave. You’re fired.’ So that’s how it went down and how it was described by Tom to me.”

Bell said that over DeSarle’s two years as a manager at the Glen Cove Carvel franchise, he worked hard, and as an essential worker cleared 50 hours a week during the pandemic.

This is devastating to DeSarle, Bell said, as his full-time position as a manager of the Glen Cove Carvel was one he relied on. “Now he’s out of work,” Bell said.

This alleged incident comes after state Gov. Andrew Cuomo ordered New Yorkers to wear masks or face coverings in public spaces where they cannot maintain social distance. Cuomo further signed an executive order on May 28 authorizing businesses to deny entry to those who do not wear masks or face coverings. And the sign on the Glen Cove Carvel states all customers must wear a mask before entering.

A Glen Cove Carvel employee, who wished to remain anonymous, said customers should be assured that employees of the franchise have been working to keep everyone safe. Surfaces are cleaned, customers wear masks, and those who do not are offered masks.

The franchise owner could not be reached for comment. Chen told Newsday that DeSarle was rude to the customer, failed to provide masks made available by Carvel and then quit his job three days later.

“Carvel is stating that the particular store is complying with local and state ordinances,” Bell said. “But clearly if you see the video that aired, the individual is not wearing a mask.”

Carvel  Ice Cream did not return a request for a comment.

Bell is organizing a GoFundMe page for DeSarle to help him during this time. Bell added that DeSarle has been offered a job. Going forward, Bell said, he and his client will work to solve this dispute privately before acting.

If need be, Bell and DeSarle are considering filing suit in state Supreme Court and a complaint with Cuomo’s office and the federal Occupational Safety and Health Administration.

The president of the Glen Cove Chamber of Commerce, Lisa Cohn, was outraged when she learned what allegedly happened to DeSarle. “It’s despicable,” Cohn said. “The chamber, the Glen Cove Downtown Business Improvement District, the Gold Coast Business Association and the North Shore Hispanic Chamber of Commerce have been meeting weekly, and we’re trying to put together a mask campaign. That’s how strongly we believe in the importance of masks.”

Mahir Nisar, an attorney with Nisar Law Group P.C., argues that this alleged incident could violate New York Labor Law title 740, which prohibits employers from retaliating against employees for refusing to take part in any activity that presents a substantial and specific danger to public health and safety.

“Due to the substantial and specific danger that Covid-19 poses to the public health and safety, an employee’s objection to, or refusal to participate in, the violation of New York’s Covid-19 quarantine order would arguably fall in this category and be protected against retaliation,” Nisar of Glen Head said.

The identity of the customer in question is unclear.