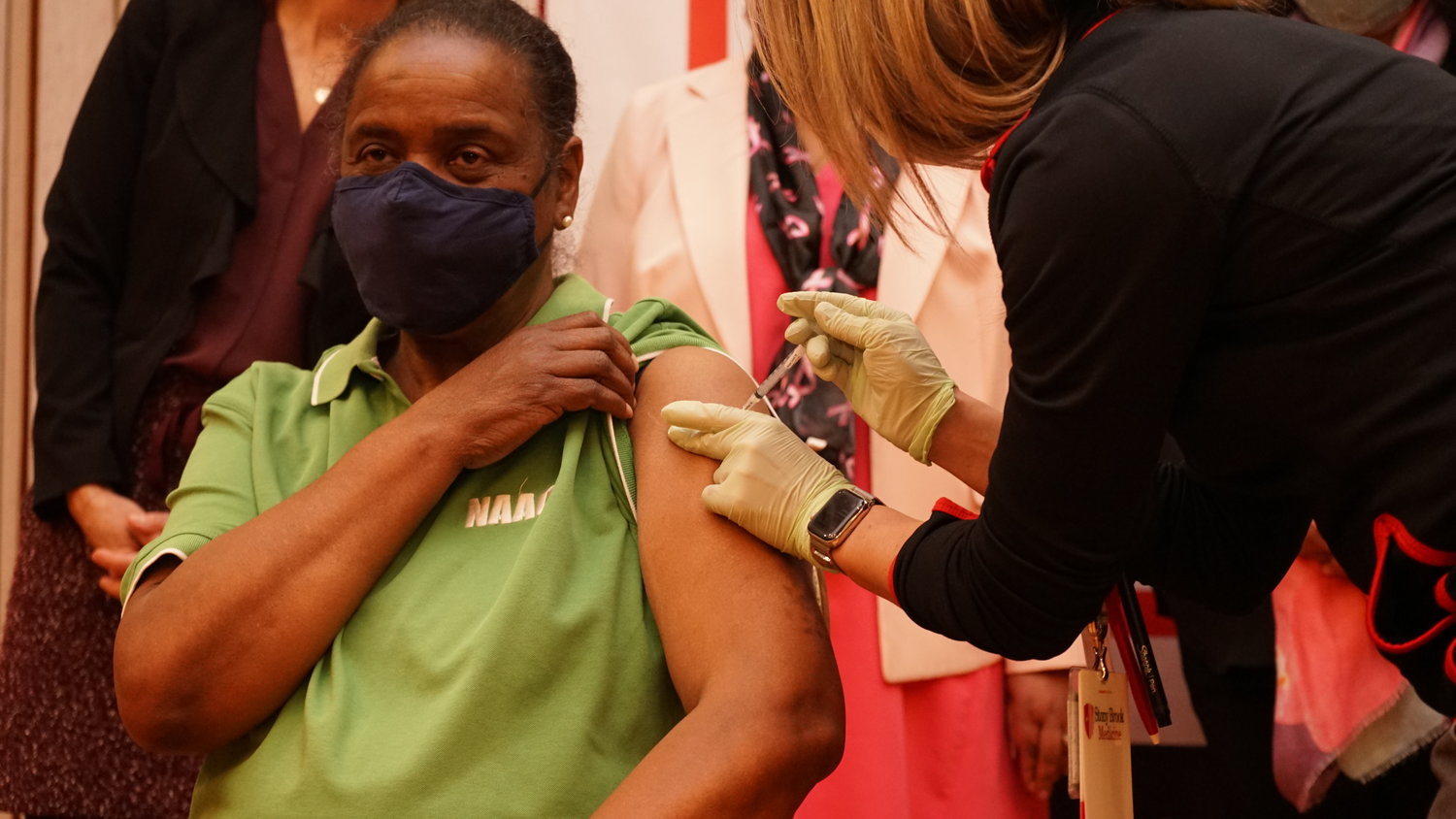 Doris Hicks, president of the Lakeview branch of the NAACP, received her first dose of the coronavirus vaccine at a pop-up vaccination clinic at the Gateway Christian Center in Valley Stream on Feb. 23.
Peter Belfiore/Herald
By Nakeem Grant

Many Lakeview residents were hopeful for easier access to the coronavirus vaccines. Their wishes became reality when a pop-up vaccine site appeared at the Lakeview Public Library on March 18.

The daylong event was arranged by Tracey Edwards, the NAACP’s Long Island regional director, Lakeview Library board President Michael Alexander and Northwell Health. Several stations were set up throughout the children’s room, Cherry Lane, where residents received their inoculations.

“I think the closer that we can get to communities in order to administer the vaccine, the better we are,” Edwards said.

While mass vaccination sites at hospitals, colleges and stadiums are good for the overall vaccination campaign, Edwards said, efforts at smaller centers can help alleviate some of the apprehension many people may have about getting vaccinated.

Experts have said that communities of color, particularly Black communities, are prone to distrust medicine because of a history of abuse by the American medical system. According to state vaccination figures, only 5 percent of people on Long Island who have received at least one vaccine dose are African-American. Some 75 percent of Lakeview’s population is Black, according to 2019 census data.

“We can’t put into words how important this for our community,” the Rev. Tristan Salley, of St. Paul AME Church in Lakeview, said. “Our community has a strong minority presence, with people that don’t have access to adequate health care or transportation. This provided a gateway to access for them.”

Salley, who received his second dose at the library, said he had been hesitant about vaccines in the past. This time around, he said, getting inoculated was a matter of life and death. “For me it was a decision to protect those that I love and care about the most,” he said. “Having nerves and being fearful is human, but we have to have a faith and a hope in a brighter tomorrow, especially for a minority community. We’re grateful for every person who came out and rolled up their sleeve. I’m hoping that, going forward, none of us forget the lessons we’ve learned over the past year.”

Doris Hicks, president of the Lakeview branch of the NAACP, said that plans for a pop-up site in Lakeview were in the works for months, and that everything was finalized just days before March 18.

“I’ve seen a lot of community people here that I know and their families, which was very nice to see,” Hicks said. “We’ve reached out to the Hispanic community in Hempstead, too, and I still have people calling me for reservations.”

With the country’s coronavirus death toll continuing to rise, Hicks said that getting vaccinated was an easy decision. She received her first dose at a pop-up clinic at the Gateway Christian Center in Valley Stream in February.

“I don’t want to be a part of the hundreds of thousands of people who have passed away from this virus,” Hick said, “and I don’t want anyone from my neighborhood being a part of that. I have some underlying health issues, too, so it’s even more important for people like me. I have a 99-year-old aunt in Virginia, and I want to be able to go see her soon.”

Residents who received their first dose at the library are scheduled to return on April 8.