Honoring those who served in the City of Glen Cove 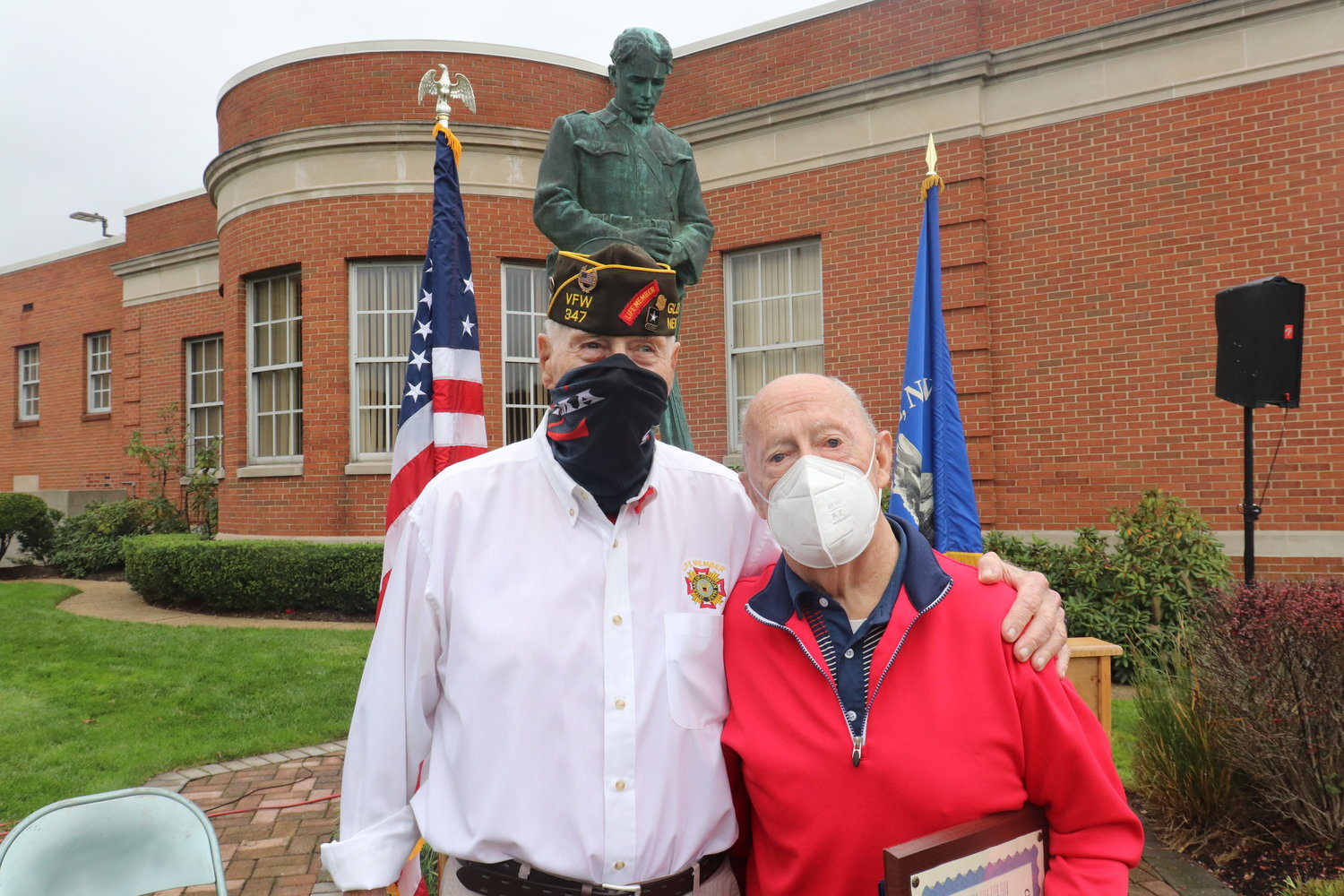 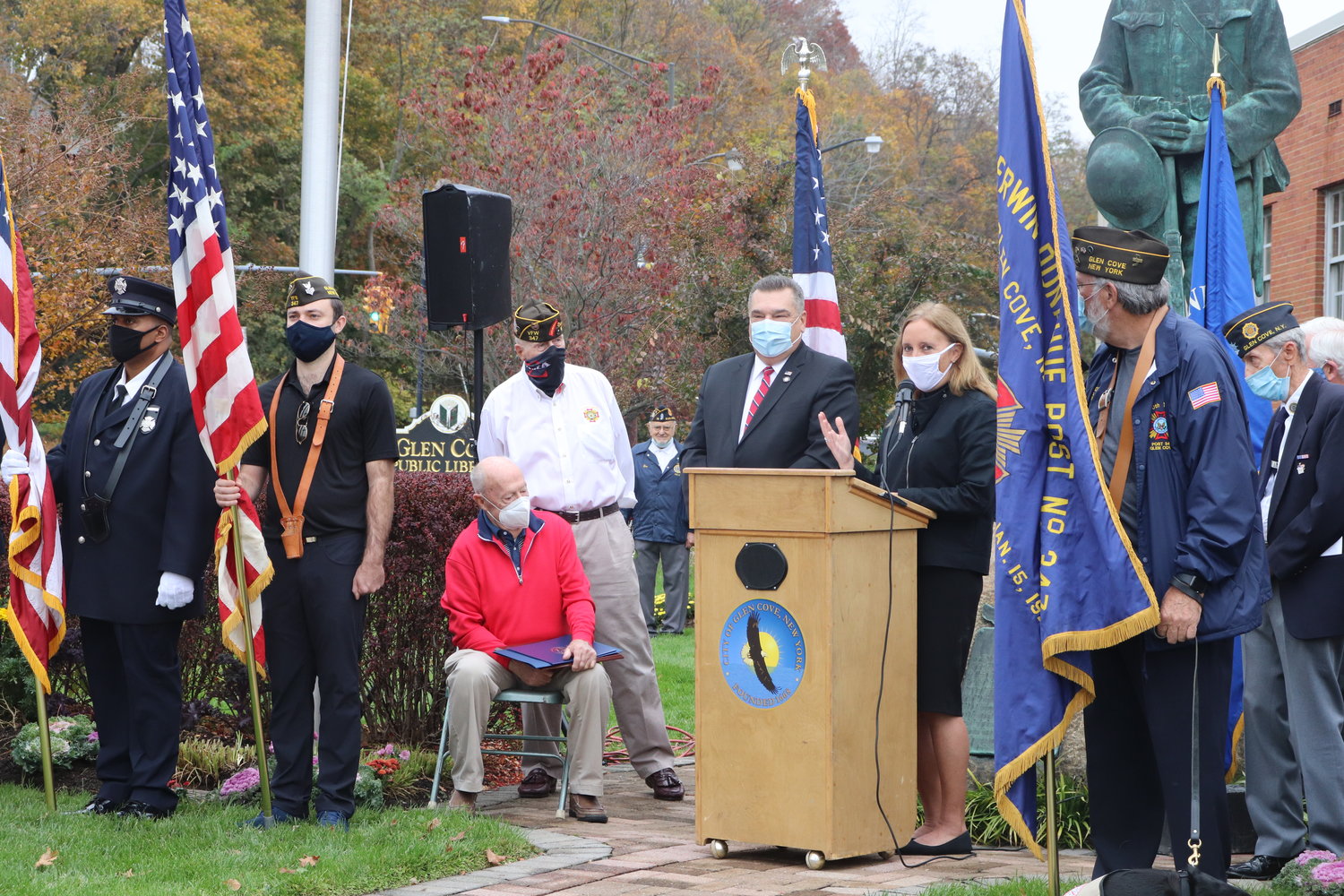 Nassau County Legislator Delia DeRiggi-Whitton, at the podium, recounted working with Donald Doran at the golf course 30 years ago, adding that his laugh has not changed.
Jennifer Corr/ Herald Gazette 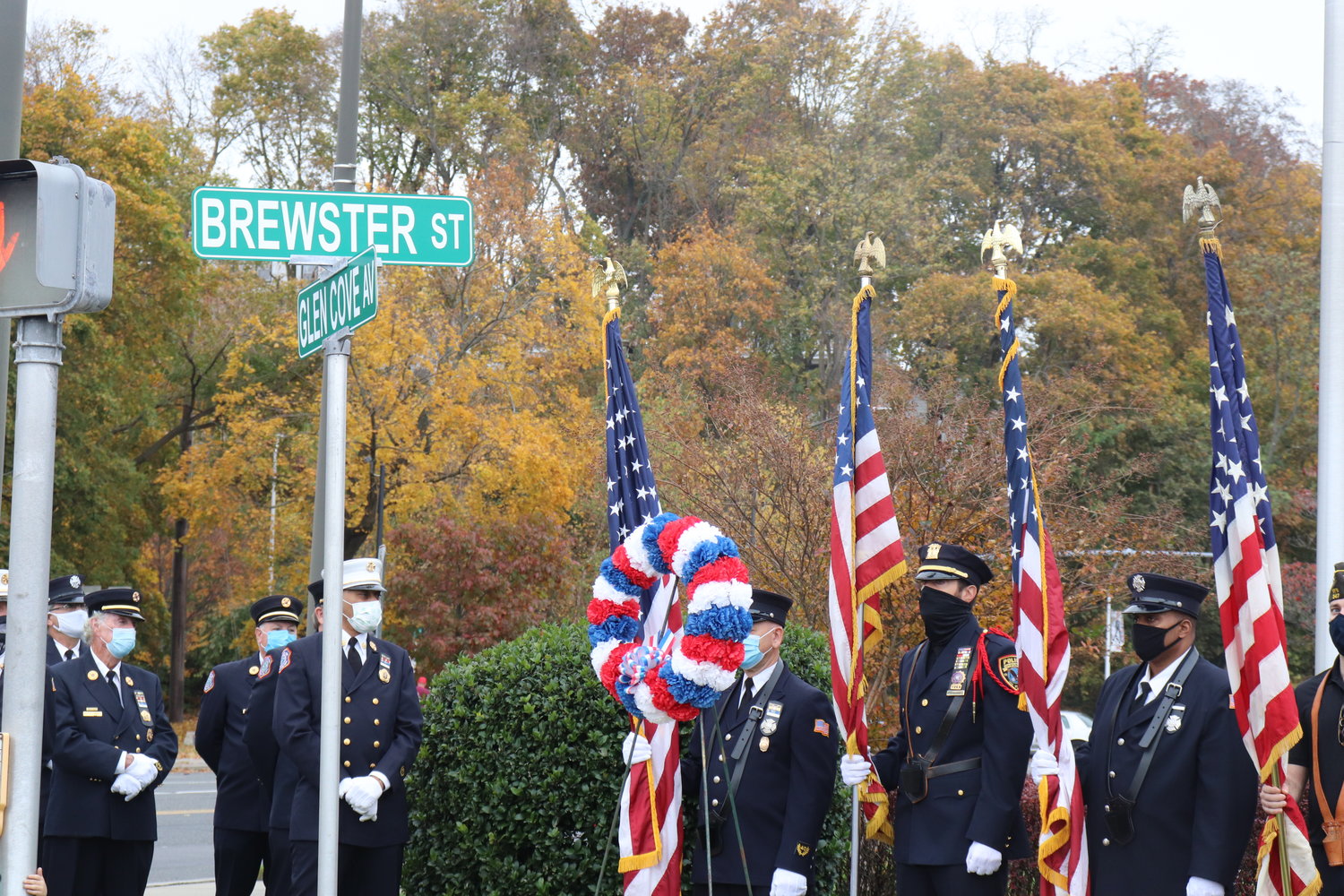 With a wreath placed in front of the Doughboy monument, veterans will still be honored this Veterans Day.
Jennifer Corr/ Herald Gazette 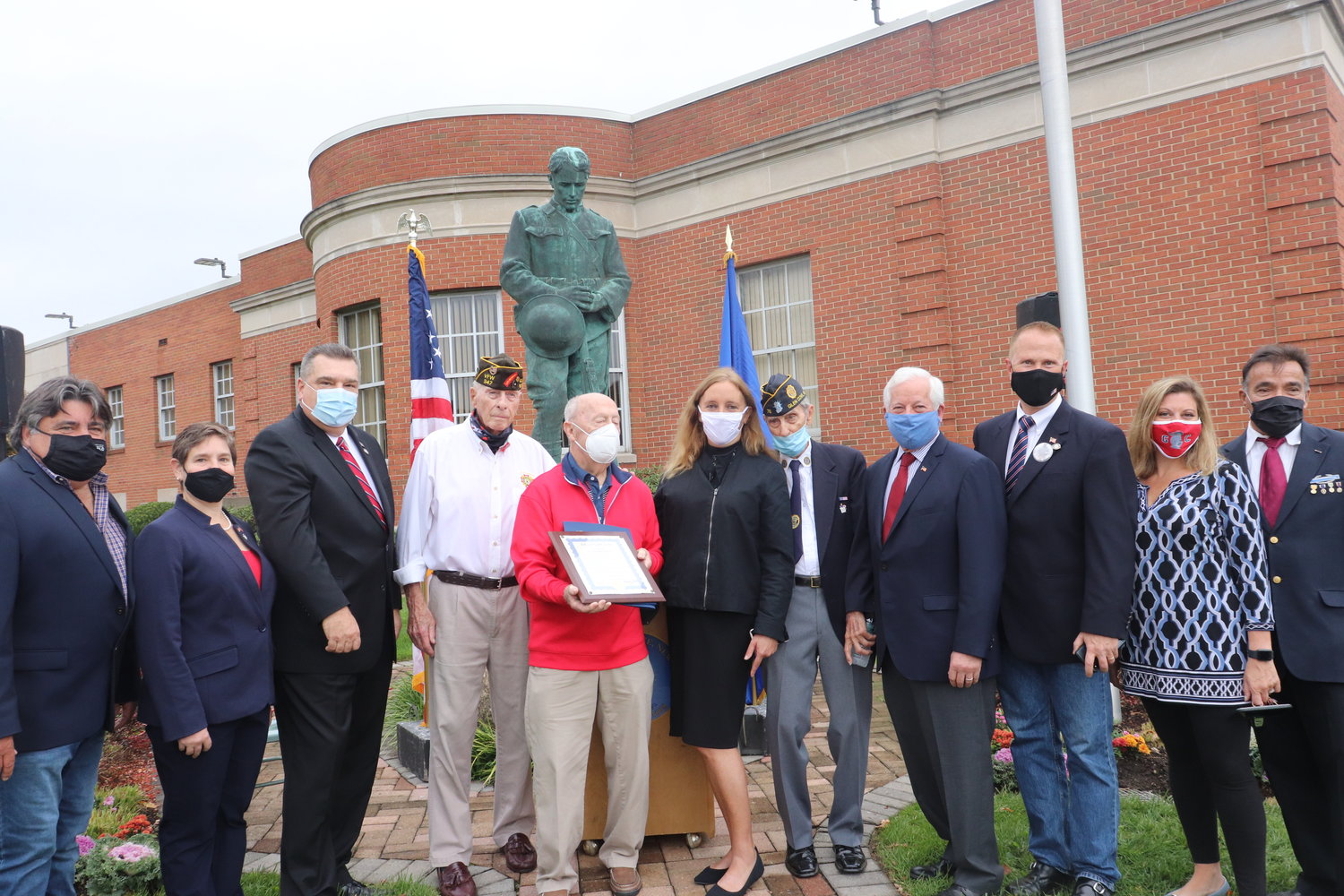 To observe Veterans Day, Glen Cove officials and veterans gathered at the city’s library in front of the Doughboy, a monument of a U.S. infantryman — which is what those who served during WWI were called.

While the observance was smaller in scale than those in years passed due to Covid-19, City of Glen Cove Mayor Tim Tenke said it was important for him to make sure that veterans knew just how special and appreciated they are in the community.

“I always think that they should be thanked every day,” Tenke said. “I just wanted to reach out to all the veterans that have served, especially the ones from our area, as well as their families, to say thank you for your service to this country and we wish them well and we hope that soon we can all gather again together in celebration of all their efforts and their sacrifices.”

With a more private service this year, the Glen Cove Veterans of Foreign Wars Post 347’s tradition of honoring a local veteran will continue. This year that veteran is Donald Doran, 85, a lifelong Glen Cove resident who served in the U.S. Army and was assigned to the 82nd Airborne Division, Artillery Battalion. He served from 1954 until 1956.

Former VFW Post 347 Commander Benjamin Farnan introduced Doran. “Mr. Doran, interestingly enough, is a person who always supported our VFW,” Farnan said. “He is not a member of our VFW. He is a person who has supported all of our fundraisers and all of our events that we have, especially after our Memorial Day Parade when we have a cookout. He is always there and is always part of it.”

Doran is not a member, since he did not serve in a foreign location or in foreign combat, but Farnan said that Doran is certainly close to all members and they certainly wish they had him as a member.

When Doran was nine-years-old, WWII had just ended. His childhood was filled with patriotism, leisure, family, sports and hard work as a newspaper deliverer, bringing papers like Newsday and the Glen Cove Echo, to doorsteps and as a golf caddy for the Nassau Country Club in his youth.

“It was a lot of years ago, but I remember it,” said Doran, who grew up on Woolsey Avenue. “I came from a large family, there was eight of us. We never had a lot of money, but we had a lot of family.”

He especially remembers playing in Glen Cove’s many parks. “It was a beautiful place,” Doran said. “It still is. But the population was probably, going from my recollection, probably 7,500 people. Glen Cove is four times bigger now.”

“It was a nice place then and to me it still is,” Doran added. “It’s a different place, but it’s a nice one.”

The patriotism Doran experienced growing up in the years after WWII inspired him to enlist in the U.S. Army. He was assigned to the 82nd Airborne Division, Artillery Battalion. He described his years of service as a beautiful experience.

After briefly living in Los Angeles, he came back to Glen Cove to raise a family and his youngest daughter Donna Cannon even followed in his footsteps, by serving as a commander in the U.S. Army.

For 15 years, Doran worked as a property manager in Centre Island, N.Y. and spent much time with the Glen Cove Men’s Golf Club, participating in and winning as many tournaments and events as possible.

“Golf is just a pleasure, it’s something I just love,” Doran said. “It’s the competition, friendly get-togethers. My hobbies were always outside. I’ve done outdoor stuff forever. I’ve done skiing. You name it, I’ve done it.”

Another special part of Doran’s life is attending VFW Post 347 events and supporting their causes. He said he is thrilled to be their honoree this year.

“I believe Veterans Day is a holiday and a very sacred and reverent holiday where we honor the men and the women who have worn our nation’s uniform,” Farnan said. “I honestly believe it doesn’t make a difference if the veterans have served in war or in peace. It is also a day that I believe is designated to pay tribute and praise for those veterans who have not returned from the battle, the ones who lost their lives.”