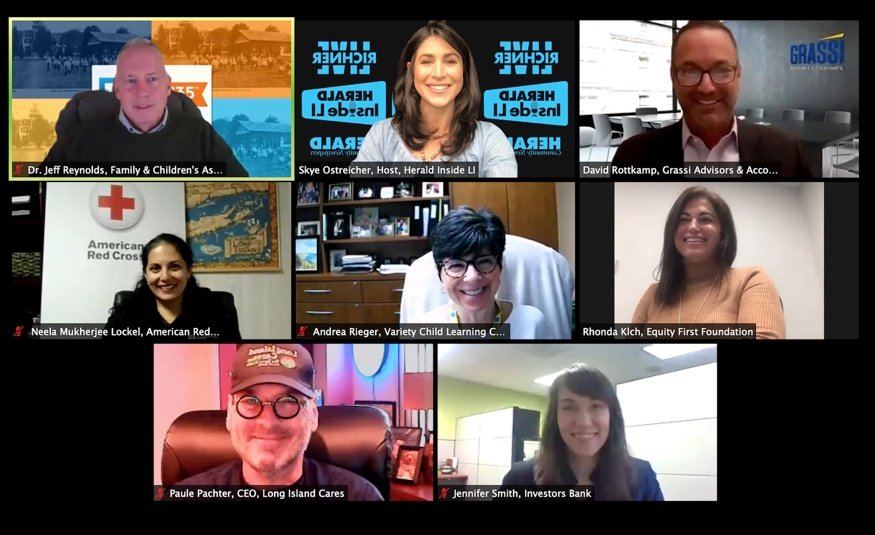 The latest episode of the Herald Inside LI webinar series featured six guests from not-for-profit organizations who discussed how they are handling operations amid the current Covid-19 pandemic.

Skye Ostreicher, of Herald Community Newspapers and RichnerLive, co-moderated the discussion alongside David Rottkamp, the not-for-profit practice leader at Grassi Advisors and Accountants.

The Nov. 12 webinar featured perspectives from non-profit agencies, both big and small. Red Cross, for example, has operations across the country, while the Equity First Foundation is a grassroots, volunteer-based organization. Each guest shared experiences on how funding and engagement are currently challenges.

“For those of us on the front lines in dealing with health, human services and disaster relief, we’ve come to understand that Covid has exposed all of those fault lines that existed long before the pandemic ever hit,” Reynolds said. Hunger, housing accessibility, childcare, general health, and mental health issues and inequities have been exacerbated in recent months, he noted, and crises like the opioid epidemic were “a problem we were turning a corner on, and we’re right back to where we started many, many years ago.”

Many not-for-profits, Reynolds explained, were already stretched to capacity in offering services before the pandemic began. The Family and Children’s Association is Nassau County’s only shelter for runaway and homeless youth, and funding has not changed in three decades. As of March, the many in-person fundraisers that are common for non-profit agencies were canceled.

Many people who used to be donors, he added, are now those who seek out the services of non-profits.

“It’s amazing the amount of resiliency and innovation and effort that is put forth by every non-profit organization, from the smallest PTA or Little League club to the larger social service, hospital or health and educational system and everything in between,” said Rottkamp, who has been a CPA for non-profits for more than 30 years.

The Equity First Foundation, which was founded by Klch five years ago, is a “very small” non-profit that teaches financial literacy to people of all ages. Much of its work took place in classrooms, but remote learning in local school districts upended that initiative, Klch said.

Virtual one-on-ones and other digital endeavors, including The Diversity Project podcast, have become the norm for the Equity First Foundation. Financial crises for individuals, she added, are a deeply emotional topic, with the need for outside guidance often crucial.

For Rieger, the biggest positive that has emerged in recent months is the resiliency of the Variety Child Learning Center staff, which services hundreds of special-needs students while also dealing with their own issues at home.

This year, Long Island Cares is celebrating its 40th anniversary.  It provides food assistance to 375 local food pantries and kitchens, as well as six pantries of its own.

“What we’ve been doing for the past eight or nine months is simply try to help people survive,” Pachter said. Food intake and distribution have increased by nearly 80 percent for the organization since the pandemic began.

In the last eight months, Long Island Cares has fundraised “probably more than we’ve made in the past two years,” Pachter said, with donations coming from more than 40 states across the country.

The Red Cross’s in-person fundraiser shifted to a virtual event, which was able to raise a “good amount” of money, Lockel said, and its June gala will be hosted with the greater and metro New York Red Cross chapters for a regional virtual gala.

“It’s hard to keep people engaged and excited,” Lockel said, “so we’re just trying to find what will bring people in, keep them engaged and still carry on our mission.”

A major Variety Learning Center fundraiser scheduled for April was also canceled because of the pandemic and is now slated for 2022.

The restructuring of in-person events forces organizations to reconsider the efficacy of such fundraisers, according to Reynolds — “The model is broken, people,” he said.

“The reality is, events are the least efficient ways to raise a dollar,” Reynolds said. “We have to find a way to do things a little differently.”

The key, he said, is to respect people’s time while making sure they know where their donations are going. “I’m going to take the money we would’ve spent on hors d’oeuvres and fancy desserts, and we’re going to put them towards services in the community,” he said. “Your dollar will actually go further.”

Personal protective equipment, or even the technology needed to offer remote services, is often lacking for non-profits, Smith said. “I think there is definitely a lot of need that is not being met by individual and corporate donations,” she said.

“We are ‘people people’ at the American Red Cross — we’re all about human interaction and care and compassion for others,” Lockel said. “So, it revolves around the questions, ‘How do we continue to provide that?’ and ‘How do we create an environment where we feel connected to one another?’”

This webinar was presented by Grassi Advisors and Accountants  and sponsored by Investors Bank and Marketing Works. Herald Inside LI is a weekly webinar series. To view this full recording or attend future webinars, visit liherald.com/insideli.