Bees, butterflies and birds were the focus at the Garden at St. Francis Episcopal Church 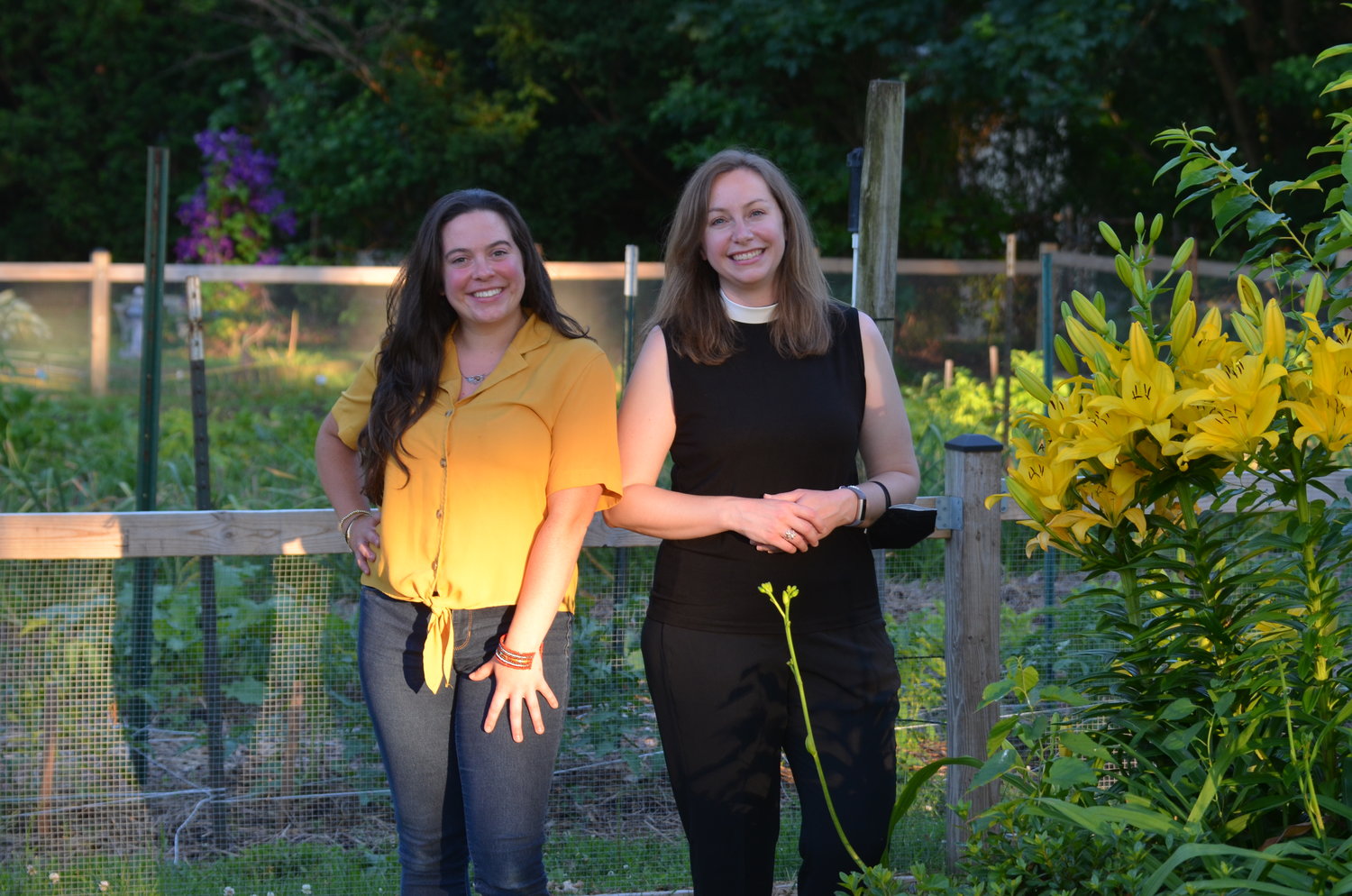 Kristin Talbot, left, the garden manager at St Francis Episcopal Church, and the Rev. Grace Flint at the garden last Saturday. In celebration of Pollinator Week, the garden hosted a series of events to educate the community on how to protect pollinators.
Tim Baker/Herald 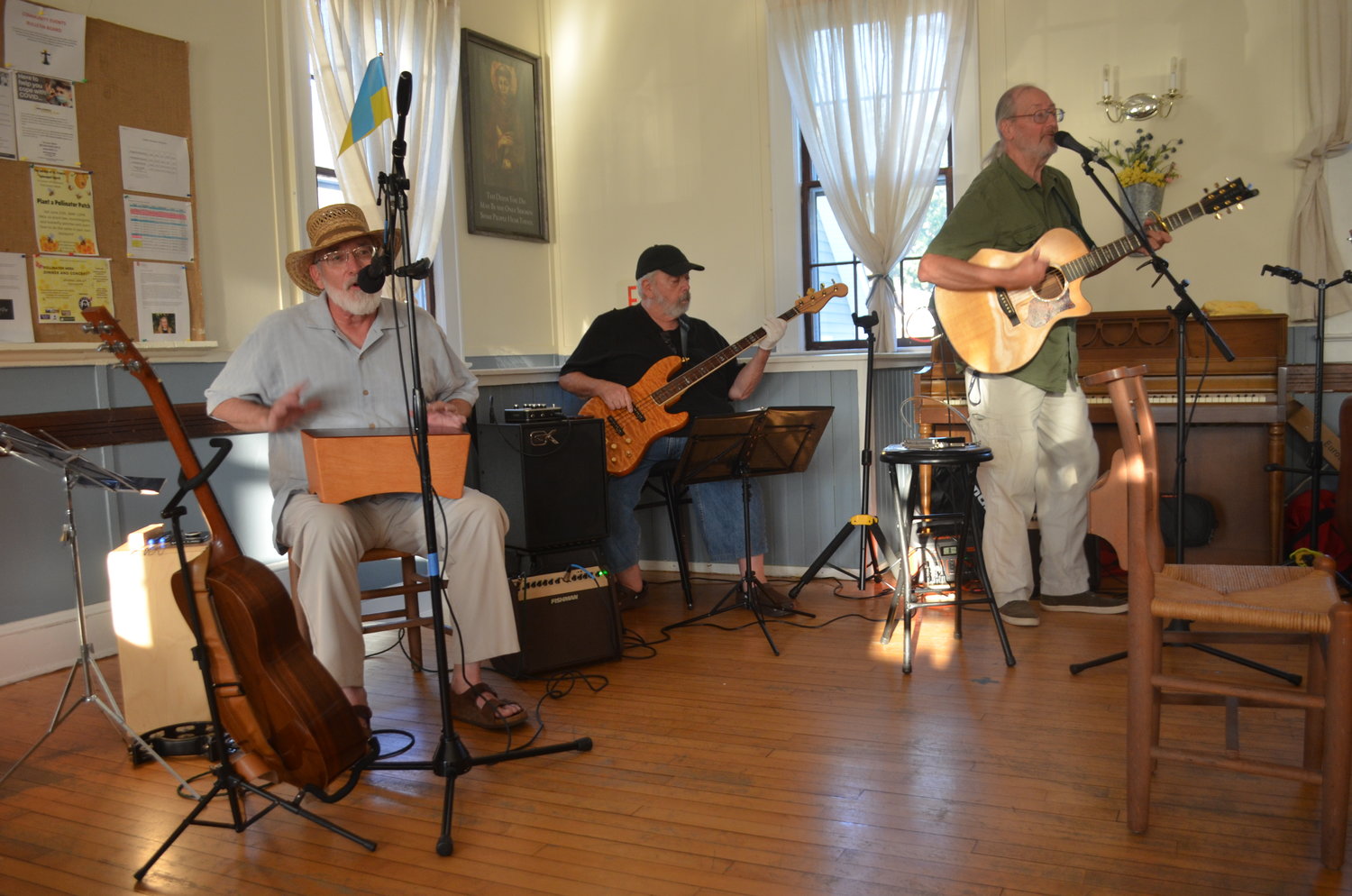 Pollinator Week’s festivities concluded with a performance by the South Country String Band.
Tim Baker/Herald
Previous Next
By Jordan Vallone

A healthy garden relies on many things, among them sunlight, proper irrigation, regular weed removal, and human upkeep.

But unbeknown to many, the key to the success of natural food sources is simple: pollinators. Threats to the environment and the habitats of bees, butterflies and even birds — earth’s pollinators — can put gardens at risk.

Volunteers at the Garden at St. Francis Episcopal Church in North Bellmore hope not only to help protect local pollinators, but also to make an impact by educating the community about their importance, and creating an environment that allows them to thrive.

On the heels of the garden’s Pollinator Week, which wrapped up last Saturday, St. Francis’s garden manager, Kristin Talbot, told the Herald that the mission to protect pollinators is part of a national movement.

“Pollinator Partnership is a national organization, built by people who are trying to spread resources and knowledge about pollinators, to people who are just living in their neighborhoods that are interested in protecting pollinators, farmers like us, (and) people who are turning to land management and have acres and acres in preservation,” Talbot explained. “They’re a really great resource.”

Talbot, who grew up in Wantagh and majored in environment studies at the University of Vermont, said the garden’s volunteers learned of National Pollinator Week earlier this year. It takes place annually in the last full week of June, and the gardeners thought it would be good way to spread the garden’s values to others.

“Tuesday was the summer solstice,” Talbot said. “When you’re talking about a shift in seasons, that’s one of the really intricate threads of pollinators, because they respond to seasonal blooms. The health of these colonies relies on certain flowers coming in at the right times.”

In Nassau County, there are a few native pollinators, Talbot explained, but surprisingly, honeybees — while extremely valuable to a garden — are not considered native. “We have honeybees here, and that’s one of the biggest pollinators,” she said. “But honeybees are European, they’re not native. And a lot of pollinators that folks in the neighborhood are going to get in their yard are native pollinators.”

Those include mason bees, butterflies, moths and even birds.

Last Saturday morning, during the garden’s volunteer hours, aside from teaching about gardening and crops, Talbot also taught volunteers how to attract pollinators to their own gardens, which can be done easily, by planting flowers.

In addition to the garden’s volunteer hours, St. Francis also premiered its Children’s Playgroup. “What I find, as we’re bringing kids in, is there’s a built-in fear of bugs,” Talbot said. “If you don’t have adults in your life that model an acceptance of bugs, a lot of times we grow up fearful of them.

“What we’re trying to do is rework that cultural attitude and get kids excited about bugs,” she continued. “Kids know that bees sting, they’re a little dangerous, but they’re also a really important part of gardening and farming. We’re really trying to rework that by educating — the more you know, the less fearful that you are.”

The playgroup will meet every other Saturday, from noon to 3 p.m., and is free to join, but Talbot said that monetary donations are appreciated.

A benefit concert, by the South Country String Band, wrapped up the week’s festivities. The funds that were raised will benefit the garden, which provides fresh produce to those in need. Recipients include pantries at St. Francis de Chantal, in Wantagh, St. Barnabas the Apostle, in Bellmore, Long Island Cares, and the Bellmore-Merrick Central High School District’s Community Cupboard, among others.

St. Francis’s pastor, the Rev. Grace Flint, expanded on why it constantly works to help others. “For many years, our parish had a ministry devoted to feeding the hungry in our community, as God calls us to respond with loving compassion to the needs of others,” Flint said. “That mission expanded to include the garden, where we have a three-fold purpose — to care and tend the earth through sustainable farming practices, to create a space for our community to connect with the joy and wonder of growing food from seed to harvest, and to provide healthy produce to those experiencing food insecurity.”

The garden’s farm stands, Talbot said, will return on July 17, and continue weekly, on Sundays from 11 a.m. to 2 p.m., through late October. Honey, eggs and whatever vegetables are in season will be sold, Talbot said, and leftover produce will be donated.

For tips on gardening, and how to attract pollinators, Talbot said, anyone can visit Pollinator Partnership’s website, Pollinator.org.

“People can go on their website and learn and find other people on their activity map,” she said. “There’s probably other folks doing things that I don’t even know about, that are local to the community. They can get in touch, and learn how they can integrate this knowledge into their backyards.”