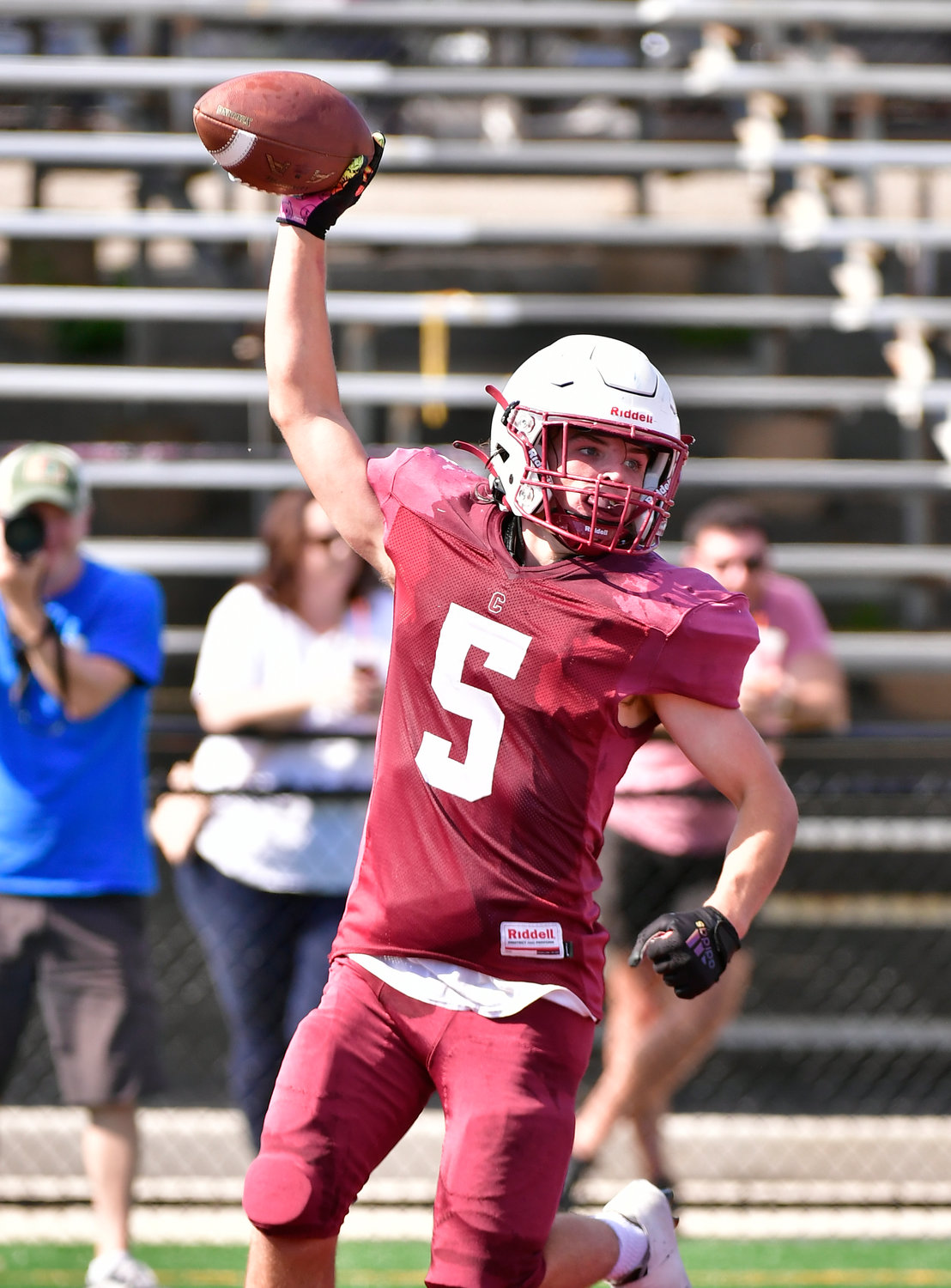 Don’t count on seeing any field goals or extra-point kicks for Clarke’s football team as long as head coach Kevin O’Hagan is working the sideline.

When the Rams score, they’re going for two. That was the case again in last Saturday’s Nassau Conference IV opener on the sunbaked turf against visiting East Rockaway as Clarke succeeded on three of four two-point conversions and snuffed a pair of Rocks’ attempts in a 30-20 victory.

The biggest two points came with 2:29 remaining in the fourth quarter after East Rockaway’s defense softened to allow senior Nick Iannucci’s 28-yard touchdown run that boosted the Rams’ lead to eight. Out of timeouts, the Rocks hoped to keep it a one-possession game but Iannucci pretty much sealed it when he followed the block of senior center Joe Buffalino’s and dove over the goal line for the deuce.

“Last season we were plus 13 going for two compared to if we kicked every extra point,” O’Hagan said. “Going back four years to when I was an assistant here, we’ve had that mindset. Even if we’re tied late, we’re comfortable going for two instead of kicking.”

Iannucci and senior Justin Somyak had two-point conversion runs in the first half following senior Tom Roche’s two touchdowns. Roche opened the scoring midway through the first quarter when took a toss left from junior quarterback Giancarlo Rengifo on fourth-and-1 and raced 50 yards along the home sideline. Roche also caught a 22-yard touchdown pass from Rengifo late in the second quarter, set up by a 33-yard Somyak run, and Clarke held a 22-6 halftime lead. Somyak had a 57-yard scoring catch on the first play of the second.

“It felt great to win and there’s more to come,” said Roche, who also contributed to the defensive effort. “We worked hard all summer and we’re a confident team.”

Up until Clarke’s last drive, East Rockaway controlled the second half following a mistake-filled opening half that included a pair of interceptions. Clarke junior linebacker Dominic Cananico picked off a pass to end an impressive game-opening drive that saw the Rocks march inside the 35. Rengifo also had an interception at midfield in the closing seconds of the half.

“It was one of those games where they took advantage of our mistakes and made a few more big plays than we did,” East Rockaway head coach Russ Pajer said. “It was a hot day and we had some issues with cramping. Our guys hung in there and showed pride.”

Sophomore Anthony Grimaldi’s 18-yard touchdown run and two-point conversion brought the Rocks within 22-14 with 3:49 left in the third quarter. Senior John Giannotti’s second touchdown of the day made it 22-20 with 6:49 remaining, but Clarke’s defense, behind senior Dan McGrady, came up big on the tying conversion try.

“We had a lot of guys step up,” said O’Hagan, who lauded the efforts Rengifo, Iannucci, Roche and Somyak. “We knew this was going to be a battle. Every time we play East Rockaway it’s a tough game.”