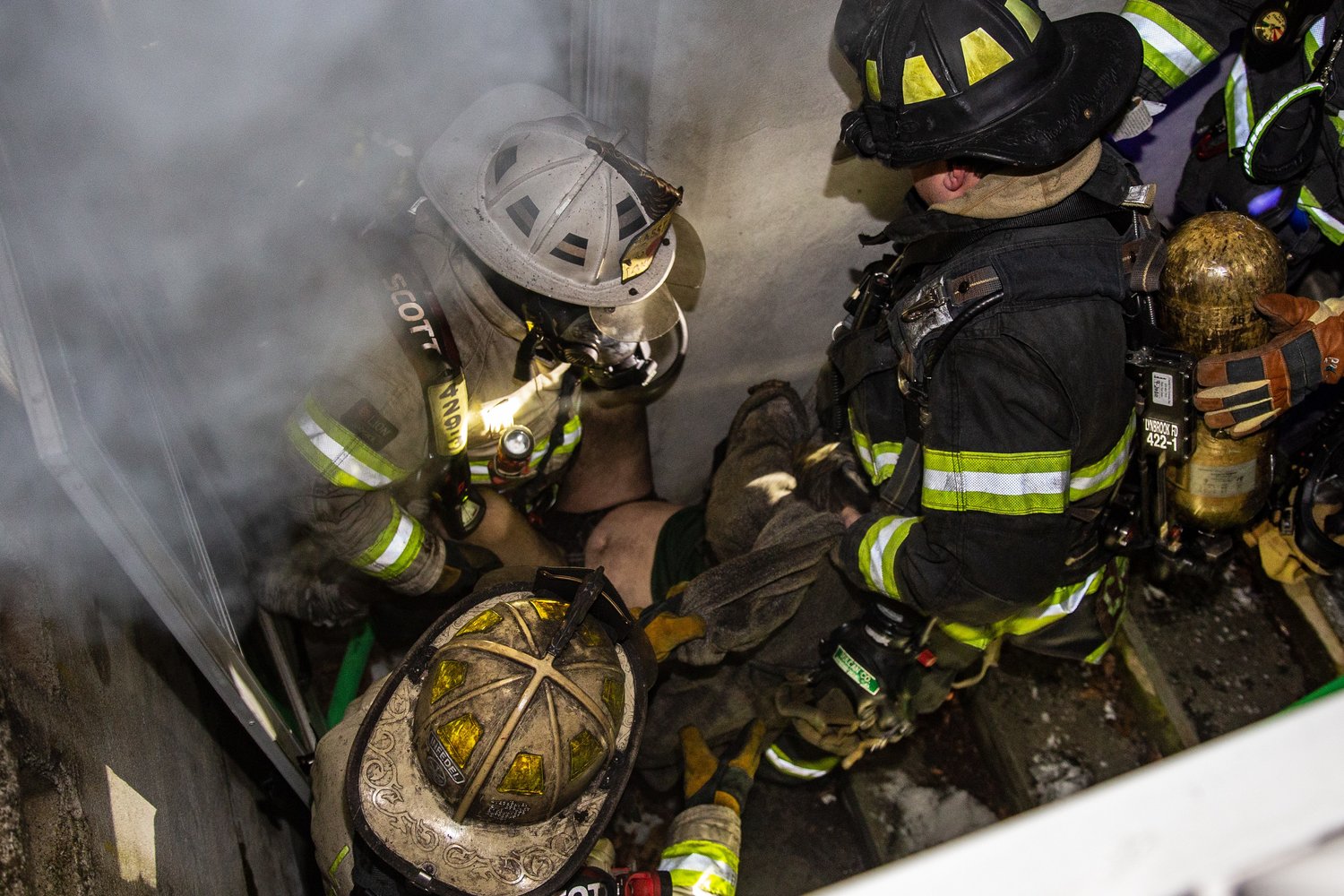 Lynbrook firefighters were honored for saving and carrying a victim from his burning basement apartment.
Courtesy Brian Grogan 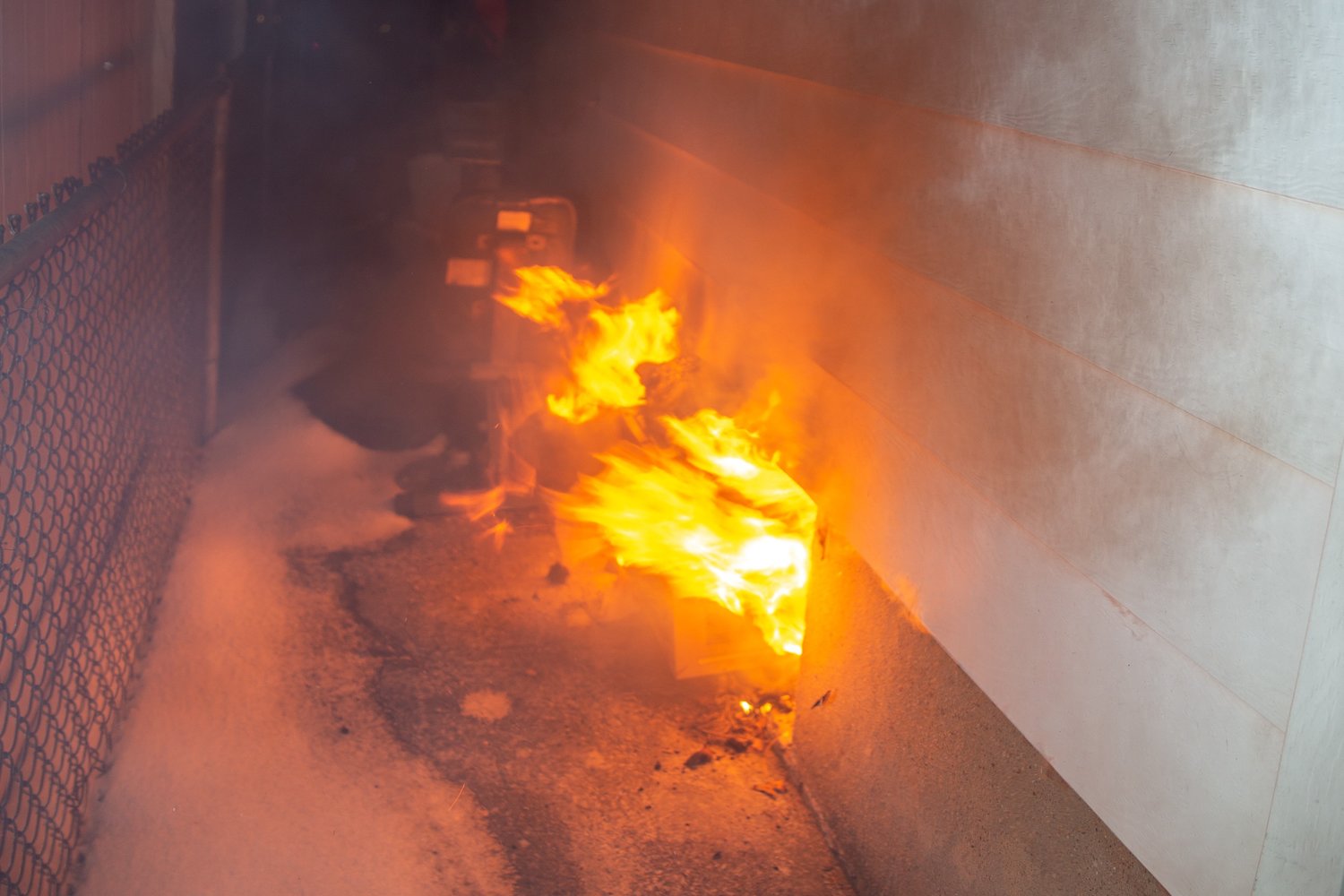 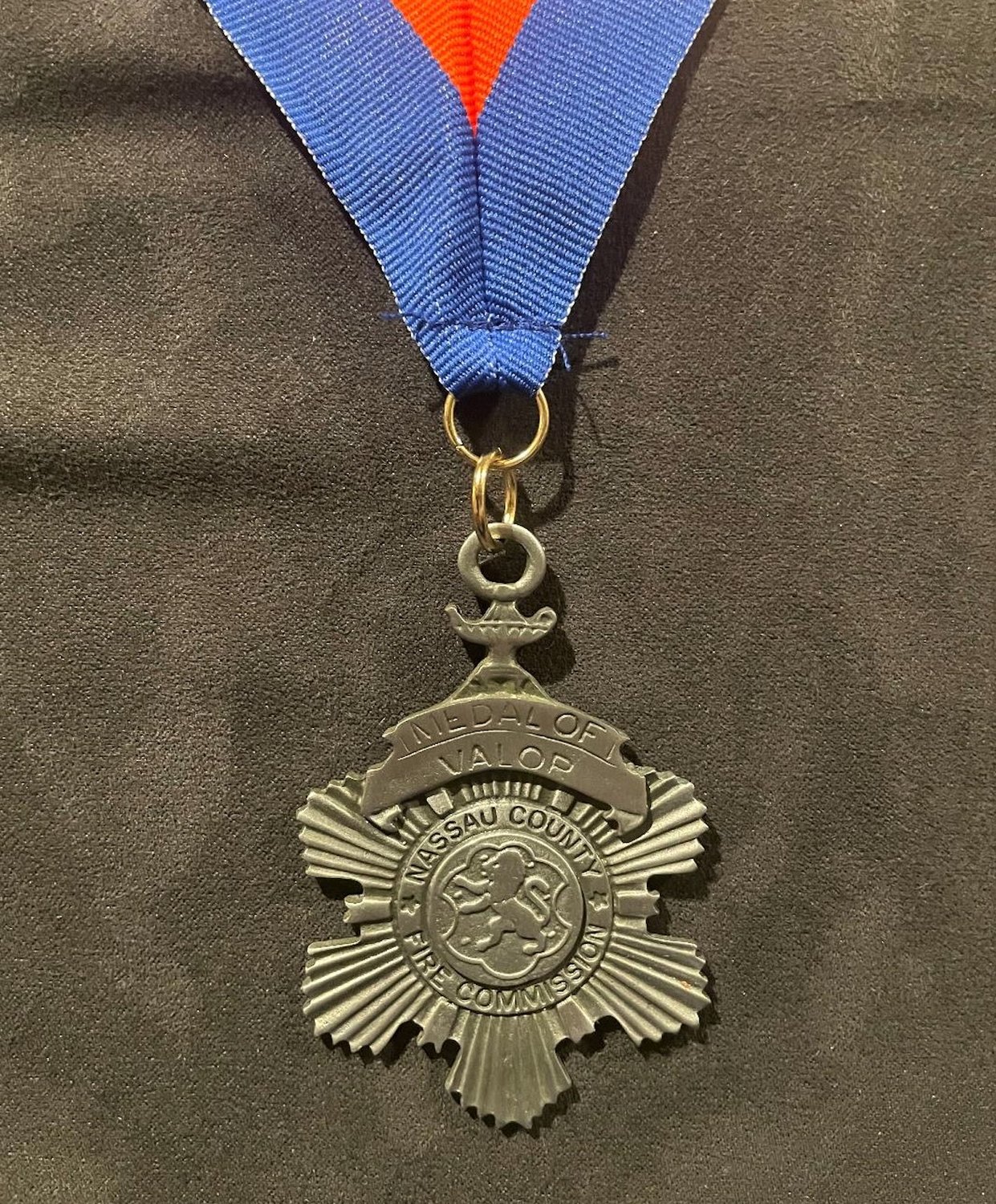 Lynbrook firefighters were called to the fire on Shipherd Avenue in Lynbrook at just after 1:30 a.m. Although the upstairs occupants fled the building, firefighters quickly learned that a man living in the basement had not come out. Fire was blowing out one of the basement windows.

Assistant chiefs Donald and Ambrosio made their way down an outside basement staircase to enter the burning basement. After forcing their way inside, they found themselves in a boiler room. They forced open a second door into the apartment.

Without the assistance of a hose line to knock down the fire, the chiefs worked through the heavy black smoke and fire to find the victim. They worked their way in total smoking darkness and heat and fire through a cluttered apartment, which made it difficult and slow to maneuver. They were soon joined by Truck Company’s interior team of  Bien, DiGiambattista, and Merkel.

Bien and Merkel made their way down a long hallway and finally found the victim on the floor of the rear kitchen He was unconscious and not breathing. They lifted the unconscious resident, but had to go through the whole burning apartment to get to the outside staircase where they came in. Bien and Merkel were soon joined by the others and all worked together to get the victim through the clutter and out of the basement.

When the resident was brought up and out of the basement, he was immediately handed off to members of the department’s Emergency Medical Company, who were waiting outside to take over. Former Capt. Janice Germain began immediate CPR when she found no pulse. She was assisted by Capt. Kaitlin Curran and First Lieut. Kacie Curran. They were joined by a Northwell supervising medic and a paramedic.

The team of Lynbrook’s EMS and Northwell paramedics continued CPR on the resident all the way to Mount Sinai South Nassau Hospital, where ultimately, they were able to detect a pulse.

Additionally, the Emergency Medical Company members were also awarded an additional EMS Unit citation for the saving of a life of a man on Baylis Place in Lynbrook on April 25, 2021, just after 3 a.m.

Lynbrook firefighters and EMS personnel responded to a call and found a man in cardiac arrest.  Assistant Chiefs Kelly, Bien and Ambrosio were first on the scene with Lynbrook police officers.  Ambrosio and Kelly immediately began CPR and rescue breaths. They were then relieved by Germain, EMT/Lieut. Samantha Dominguez and firefighter April Swanson, who continued with the CPR.

The victim received eight shocks delivered from an AED by the members. The CPR continued in the ambulance while the resident was transported to Mount Sinai South Nassau hospital, where he eventually regained a heartbeat.

A member of the family later communicated to the department that the victim was recovering and said if it was not for the quick response and the early CPR and shocks, their family member would not have been saved.

For its efforts, the Lynbrook Fire Department was also presented with an EMS Unit citation.

“The residents of Lynbrook should be proud to know that their volunteer firefighters and EMTs go beyond the call of duty every time they are called out for an emergency,” Kelly said. “ It’s great that the County Fire Commission recognizes our members for their life-saving efforts.”