A leader in the scouting community 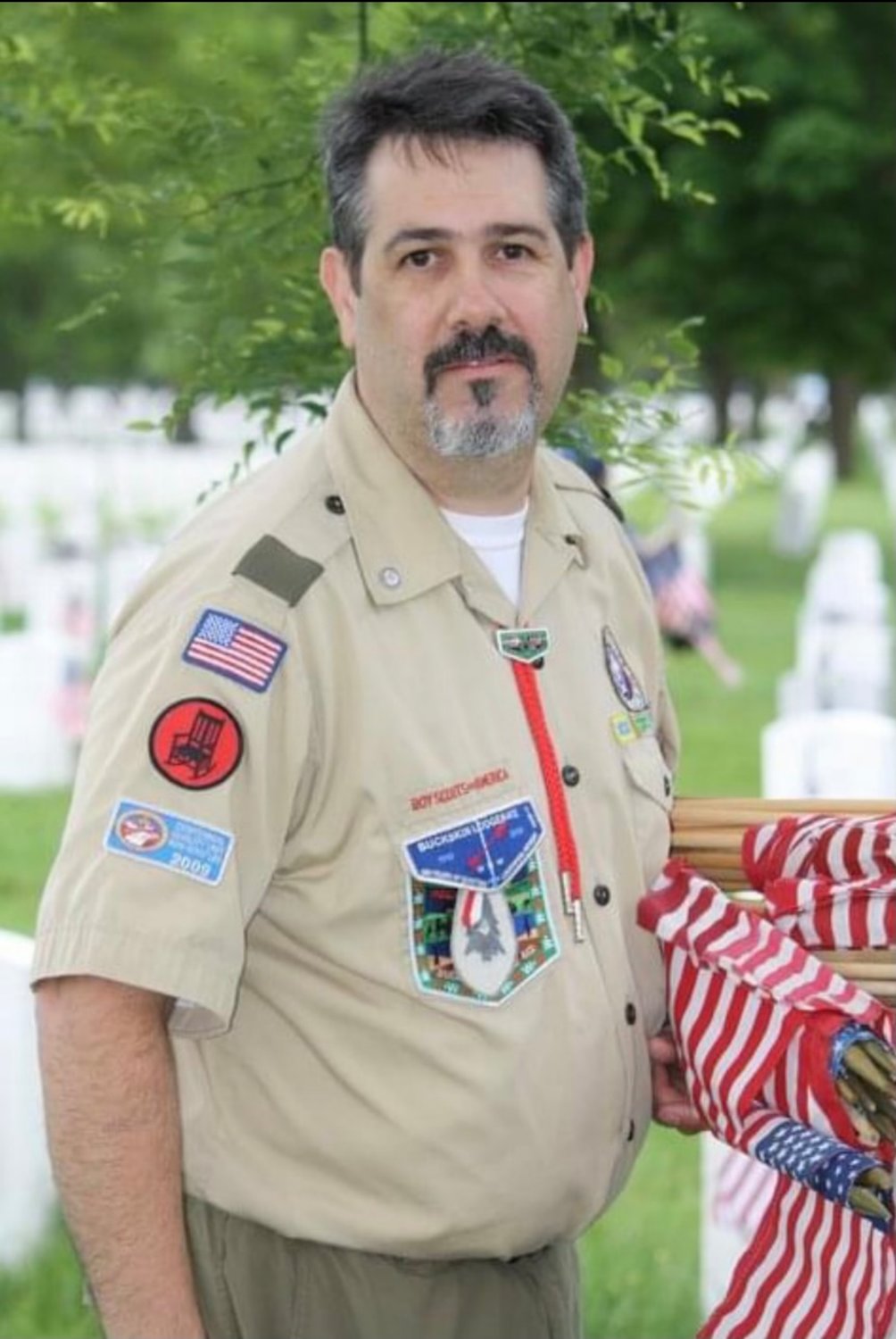 Lynbrook resident Nicholas Sincinito is the Herald’s 2021 Person of the Year, honored for his efforts in the community, including serving as the leader of Troop 121 for many years.
Courtesy Sheila Sincinito 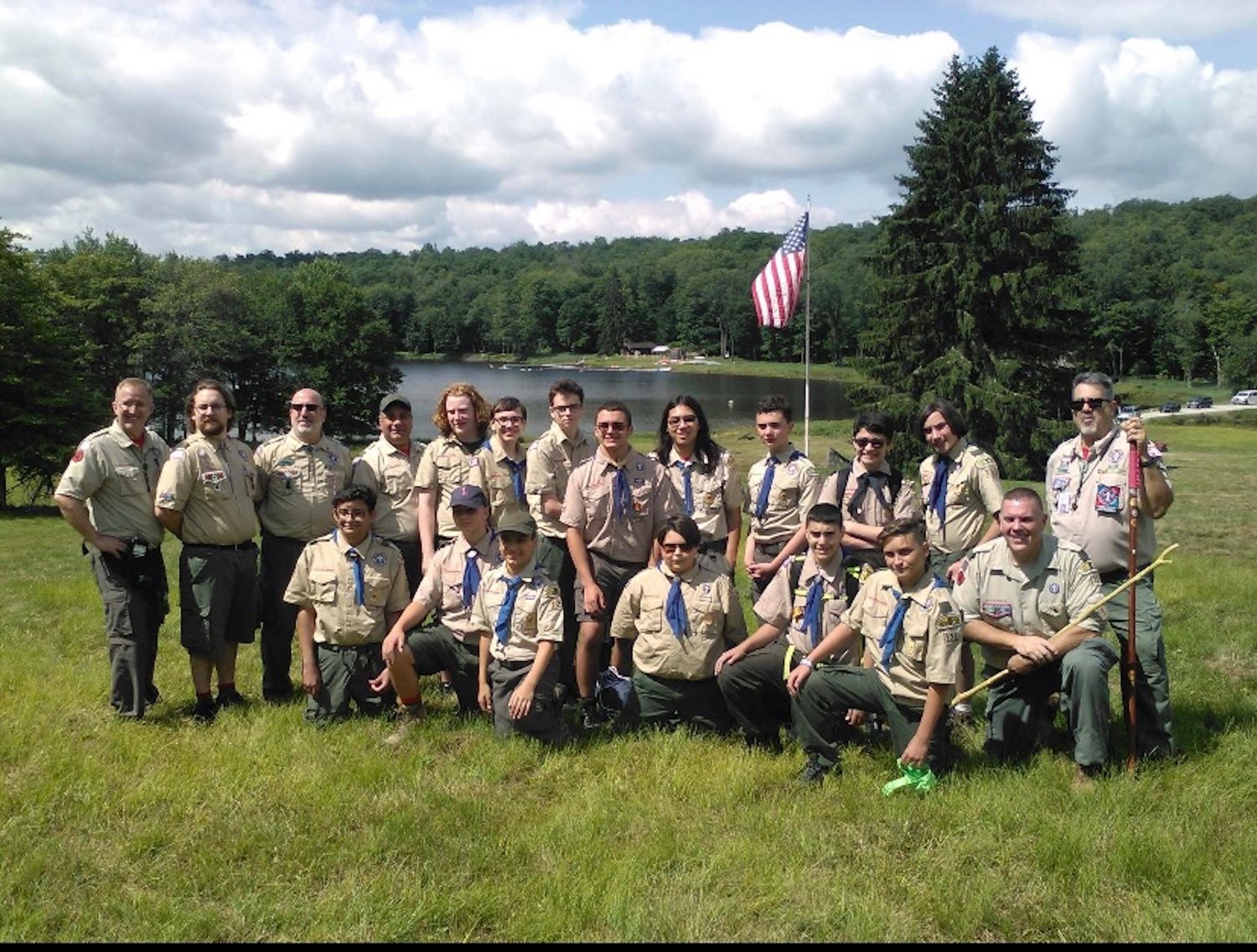 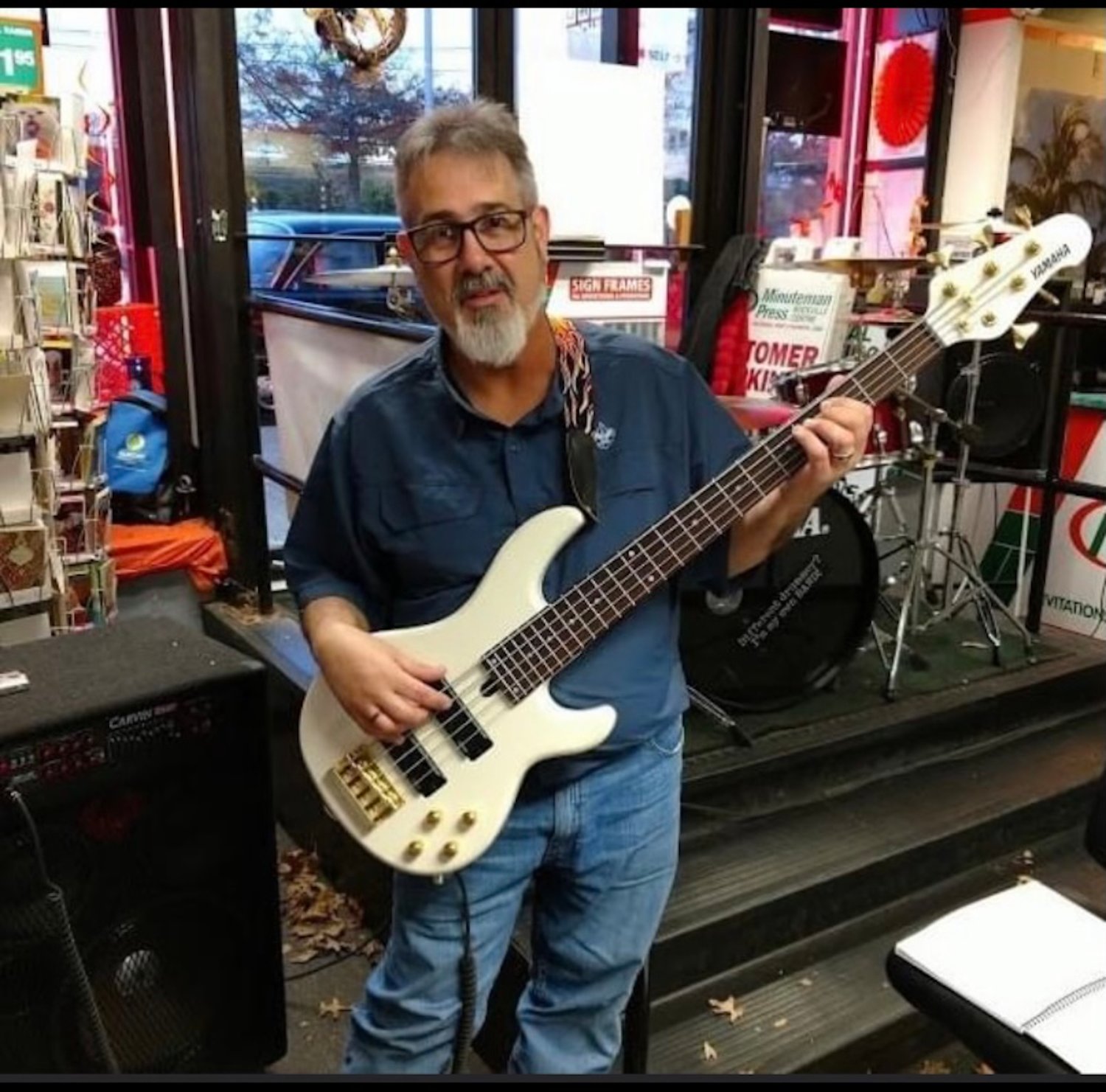 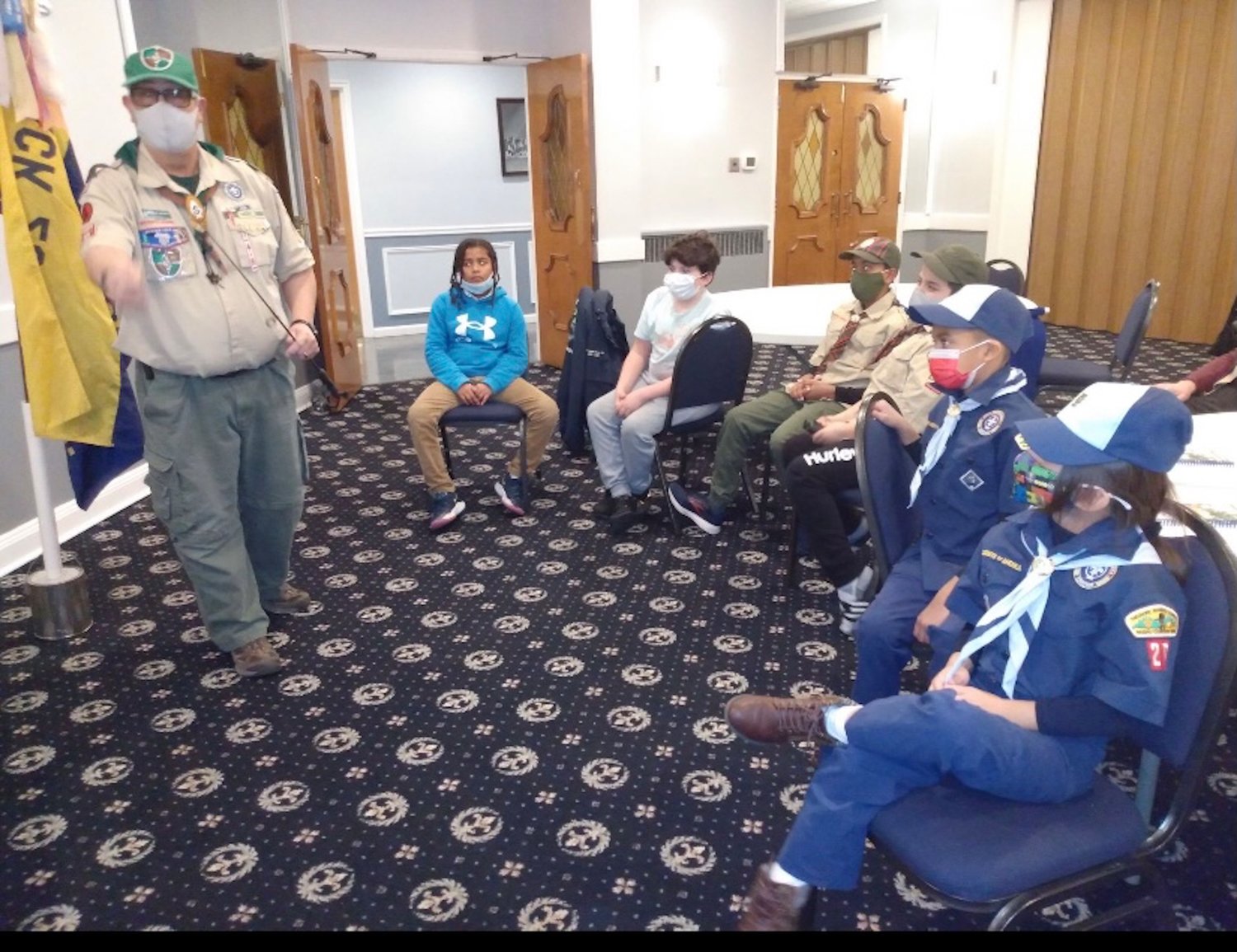 Whether it’s doing nearly everything to help shape Boy Scouts members as a youth leader, aiding his elderly neighbor or helping others around the village, Lynbrook resident Nicholas Sincinito has been there for his community time and time again.

For his efforts, Sincinito is the Lynbrook/East Rockaway Herald’s 2021 Person of the Year.

Sincinito, who turned 56 on Monday, has been involved with Boy Scout Troop 121 in East Rockaway for more than two decades, mainly serving as scoutmaster, and despite being diagnosed with esophageal cancer more than two years ago, he still remains active in scouting as an assistant scoutmaster and puts on clinics to teach scouts from other troops various skills.

“If you call, he comes,” Troop 121 Secretary Pam Makaea said. “If you can’t call, he’ll get to you. Everywhere he goes, it’s like, what doesn’t he do? That’s the type of person he is, whatever he can do to help. When you’re around Nick, and everyone is around Nick, he’s the type of person everyone is happy to be around. He’s comfortable to be with. When you leave Nick, you feel good. You have a smile when you leave him. He says, once you’re here, you’re family.”

Sincinito lives in his childhood home in village. He was the youngest of three sons of Frank and Annie Sincinito, and attended Lynbrook District schools with his older brothers, Andrew, who died in 1999, and Frank. His father was a Pearl Harbor survivor, which gave Sincinito a sense of patriotism. After high school, he began a career in publishing, and despite his illness, he still works at Minuteman Press in Rockville Centre.

In the late 1980s, Sincinito met his future wife, Sheila, and they wed more than 30 years ago on May 11, 1991. They have two sons, Sean and Colin, who each graduated from Lynbrook High School and are the fourth generation to live in the Sincinito home in the village.

When his sons were young, Sincinito became a Cub Scout master at his wife’s urging, and quickly found that he enjoyed it, Sheila said. He moved up to Boy Scouts with his sons, and stayed long after they finished scouting because he enjoyed it so much.

“He blames me,” Sheila said with a laugh. “It goes back with my brothers being involved in scouting and my father, and when I had boys, I knew the program was good from seeing my brothers go through it . . . He was always very diligent, and he’s always loved it. He loves taking the boys camping and teaching skills to them.”

Sincinito worked with other packs and taught them skills like tying knots, working with tools and cooking, and he organized the Pinewood Derby for Nassau County’s Iroquois District. He eventually was inducted into the Order of the Arrow, which is a national camping honor society that recognizes scouts and scouters (adults) who best exemplify the scout oath and law in their daily lives. He also was inducted into the Sagamore Service Council, which is a group of devoted scouters who pass on a lifetime of leadership skills and training to new generations of scouts and scout leaders, among his many accolades.

Steve Alberts said he was the Iroquois District commissioner when he first met Sincinito more than 20 years ago when the latter was a Cub Scout master, and they quickly became friends.

“He’s the type of guy that if you need something, he doesn’t know how to say no,” said Alberts, who is now a district committee member. “He was always there for the boys in his unit, his co-leaders. Any time we needed something on the district or the council level, you ask Nick, he’d say sure. I can’t say enough about Nick. He’s earned basically every award that could be achieved by a leader through service to his troop, the district and the council. I’m pleased to call him a friend and a fellow scouter.”

Sincinito served as scoutmaster for nine years until stepping down in September and inducting Paul Gish as the new leader while he stayed on as an assistant. In addition to scouting, Sincinito has remained active in his community. He is quick with his snow blower to help his neighbors after winter storms, he helps them with flat tires and dead car batteries, and he aided his neighbor, Ruth Green, who lived in the neighborhood for more than 70 years, by changing batteries in the thermostat, installing and uninstalling her air conditioner each year, helping her move items and more, until she died earlier this year at 102.

Despite his diagnosis, Sincinito continues to help his fellow community members.

“I think part of what’s good is him being involved,” Sheila said. “Even though I noticed a change in his energy levels and everything, it’s important to keep living, to keep your face to the sun, to keep moving in a positive direction. I’ve been very supportive of him doing the scouts because when you see him just talk with the youth, young men and young ladies, too, he doesn’t talk down to them, it’s very inclusive. It’s a gift he has, it really, truly is.”

Sincinito also enjoys playing bass guitar, working with wood, fishing and being in nature. His peers said that in scouting, he keeps things light for the troop, frequently cracking “dad” jokes and bringing levity while teaching important life skills to the scouts.

Lori Treglia said she met Sincinito 20 years ago because she was also a scout leader, and her family and his family have grown close over the years. She added that he is a tremendous leader of young people and helps them learn important skills.

“You come across these people, and Nick is one of them, who do it just purely for the joy of wanting to shape the youth and watch them grow up and do amazing things,” Treglia said. “He’s one of those people that, when he had gotten sick, he’s not like, ‘Why me?’ or ‘Why did this happen to me?’ He kept on doing the scouting, and I kept telling him it’s OK to step back a little. He didn’t want to let go. He’s lived his life by following the 12 points of the Boy Scout law, and he’s just . . . he’s a good guy.”