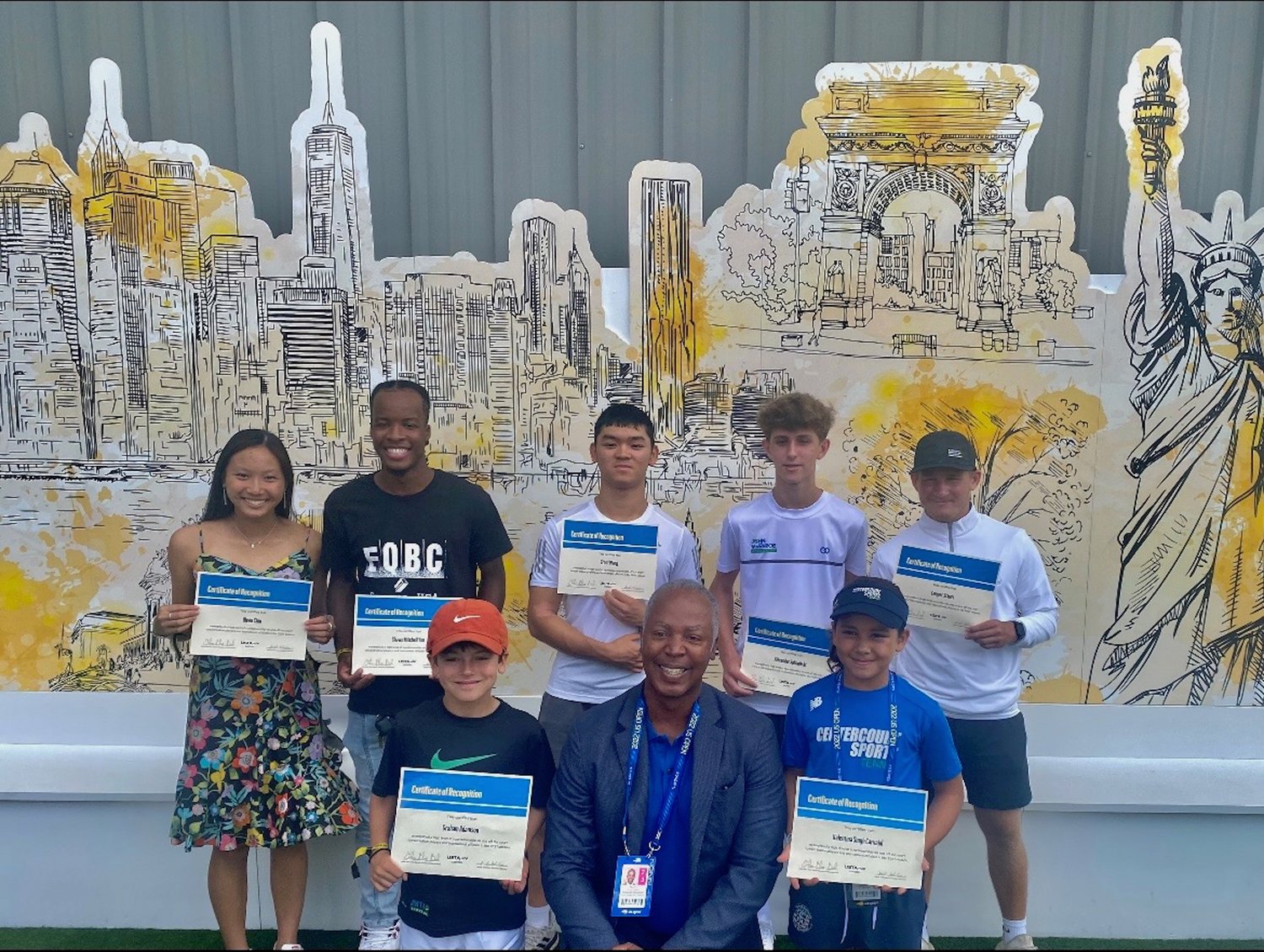 Cooper Schorr, 15, at far right, won an award from the USTA for his display of sportsmanship on and off the courts.
Courtesy Andi Schorr
By Daniel Offner

It was more than Lynbrook High tennis player Cooper Schorr’s forehand or serve that caught the attention of the USTA.

The sophomore student-athlete with a positive attitude and genuine joy for the sport was recognized by the USTA with an award for outstanding sportsmanship—demonstrating a high level of respect and compassion for fellow competitors and teammates.

His goal-oriented focus and respect on the court ultimately helped him to win the E. Hawley Van Wyck, Junior Boys 14s Sportsmanship Award. The award was presented during a special ceremony at the 2022 U.S. Open championship.

Schorr, 15, has been playing tennis since he was three years old. Showing great talent at an early age, he continued to practice. At the age of 12, he began taking lessons at the U.S. Tennis Association Billie Jean King National Tennis Center in Queens.

His dedication to the sport continued to pay off. In 2019, he became a nationally-ranked tournament player after winning the Boys 12 doubles title with Zavier Augustin of Malverne at the USTA Empire Cup.

He entered high school last year and broadened his athletic horizons trying out for football. His self-discipline and unwavering determination helped enable him to be a successful multi-sport athlete.

“I felt honored to receive this award, especially at such a big worldwide event,” Schorr said. “I will continue to show respect on and off the fields to my peers, teachers, and coaches.”

He was nominated by a group of tournament directors, referees, and parents who recognized his resolve and compassion while setting a good example for others.

Steve Kaplan, a professional tennis instructor and the owner of the Bethpage Park Tennis Center told the Herald in a past interview, Schorr displays maturity, poise, and a willingness to learn.

“Most kids his age prioritize winning above everything else,” Kaplan said, “but Cooper really puts at the forefront just enjoying what he does and learning more about it, and trying to build the kind of game that will succeed later on.”

Kaplan also trained his mother, Andi Schorr, when she played tennis as a child. She said Cooper has always been a big athlete and enjoys the camaraderie that comes with being part of a team. Unlike some of the other sports he’s excelled at, like hockey and baseball, tennis requires athletes to compete individually with structure and sacrifice.

“I think tennis gave him a lot of this,” she said. “This way to be focused and well-disciplined at such a young age.”

His mother is proud of how well he handles himself on the court. Cooper always plays by the rules, she said, and unlike other players in his age group, he never displays disappointment, anger, or frustration on the court.

“He loves it,” she said. “He loves being out there. He works so hard and has such a great attitude. Anything he puts his mind to, he gives it his all.”

During the Covid-19 pandemic, which put a hold on tournament play and many other team sports, he kept at it. In his time off the court, he took the time to teach himself how to play guitar. Cooper still continues to train with Kaplan once a week, even though this year he is taking a hiatus from competing in the USTA tournament to focus on football season.

He told the Herald that among his many goals, he aspires to someday play tennis for an NCAA Division I college program with plans on becoming an orthopedic surgeon.

“If I can, I would like to influence people,” he said. “That would be my ultimate goal.”