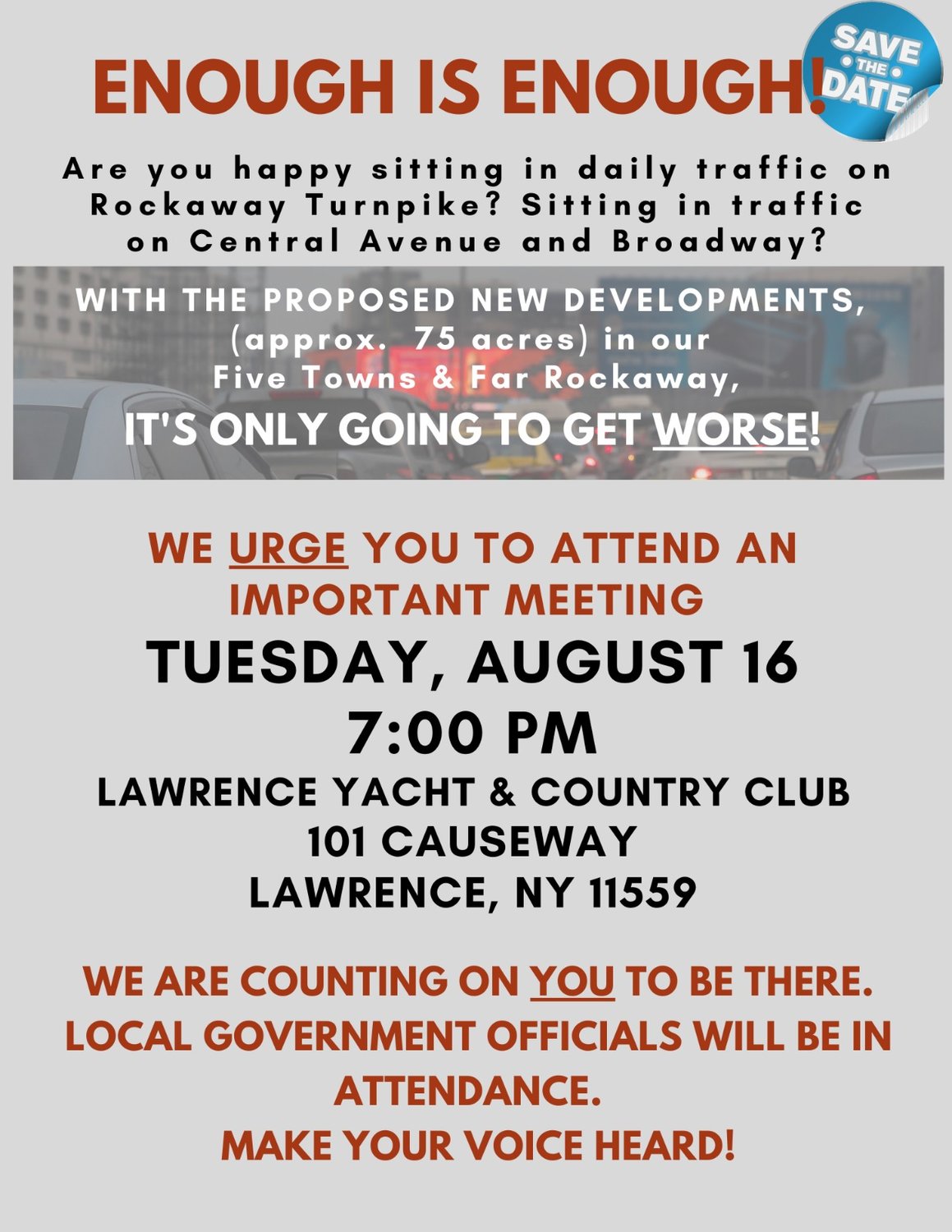 The Lawrence residents who organized the meeting to oppose development have spread the word through social media, using the flyer above, and by word of mouth.
Courtesy Judi Bernstein
Transit Oriented Development

More than 20 acres of land around the Inwood and Lawrence Long Island Rail Road stations was targeted for development after the Hempstead Town Board unanimously approved the creation of a transit-oriented development district in 2019.

Transit-oriented development aims to reduce the need for vehicles by creating “main streets” that meet the demand for mixed-use development and incorporate housing and commercial uses in a “walkable” environment, County Executive Bruce Blakeman previously told the Herald.

Five Towners will meet at the Lawrence Yacht & Country Club on Aug. 16 to make local elected officials aware of their opposition to major developments — such as proposed projects at the Woodmere Club and the approved Pearsall Project — and to voice the need for improving the Nassau Expressway.

The meeting was organized after the July 21 Lawrence village board meeting. Several residents expressed their anger that Cedarhurst had passed a zoning change for the Pearsall Project — a development of three residential building with a total of 98 units — and requested that Lawrence halt or mitigate the proposed development, and more stringently oppose other transit-oriented development proposed for the area.

Transit-oriented development promotes the redevelopment of light industrial and manufacturing zones to encourage a mix of housing and commercial use, closely integrated with mass transit.

Lawrence Mayor Alex Edelman told residents that if they organized a meeting, he would invite other elected officials to listen. “I was talking about this years ago,” village Trustee Paris Popack said at the July meeting, referring to her involvement in the Lawrence Association, the village’s civic association. Popack added that very few people heeded her words at the time.

“Unfortunately, the only way this issue gets solved is civic duty,” Deputy Mayor Jeff Landy told the residents at the board meeting, adding that development was discussed at previous meetings when, more often than not, few residents were in attendance.

That’s not expected not to be a problem next Tuesday, according to longtime Lawrence resident Judi Bernstein, who sat in on the meeting last month. Bernstein said she expected at least 300 people to come from the Five Towns and Far Rockaway. It is being promoted on social media and through word of mouth.

Meeting organizers are hoping to call for a moratorium on all major development until State Route 878, also known as the Nassau Expressway, is completed. The expressway stretches 10 miles, from the Atlantic Beach Bridge through Queens to Ozone Park.

In January 2020, the state completed a $130 million, 14-month-long construction project overhauling roughly a half-mile of the roadway from Burnside Avenue, in Inwood, to Rockaway Turnpike, in Lawrence. The project, which began in October 2018, included raising the road three to four feet to reduce flooding, and the installation of a new multi-use pedestrian path, a state-of-the-art drainage system and synced traffic signals as well as additional turning lanes. After a five-car crash in the work area in April 2018 resulted in two deaths, plastic Jersey barriers, used to separate traffic lanes, were also installed.

Residents noticed improved traffic flow on the expressway after the work was completed. But Five Towners still want more work done on the road. “It would alleviate much of the traffic problem,” said Jennifer (last name redacted), a Lawrence resident for 25 years who planned to attend next week’s meeting. “And maybe then you could talk about doing more development.”

In July 2021, while County Legislators Denise Ford and Howard Kopel stumped for a bypass to be built to reduce traffic on the expressway, Ford said, “When ambulances cannot get through and fire departments cannot get through — when regular people cannot get through to get home at a decent hour, that is a travesty, and it has to end.” Residents worry that traffic problems may only worsen as development continues.

Both Bernstein and Jennifer also said they were concerned that the Five Towns lacked the infrastructure to support more development.

Lawrence and Cedarhurst village officials are expected to attend the meeting, but no Town of Hempstead officials had confirmed that they would attend as the Herald went to press.

Have an opinion on development in the Five Towns? Send a letter to jbsssen@liherald.com.

Go to the Succos Fair in Cedarhurst Park