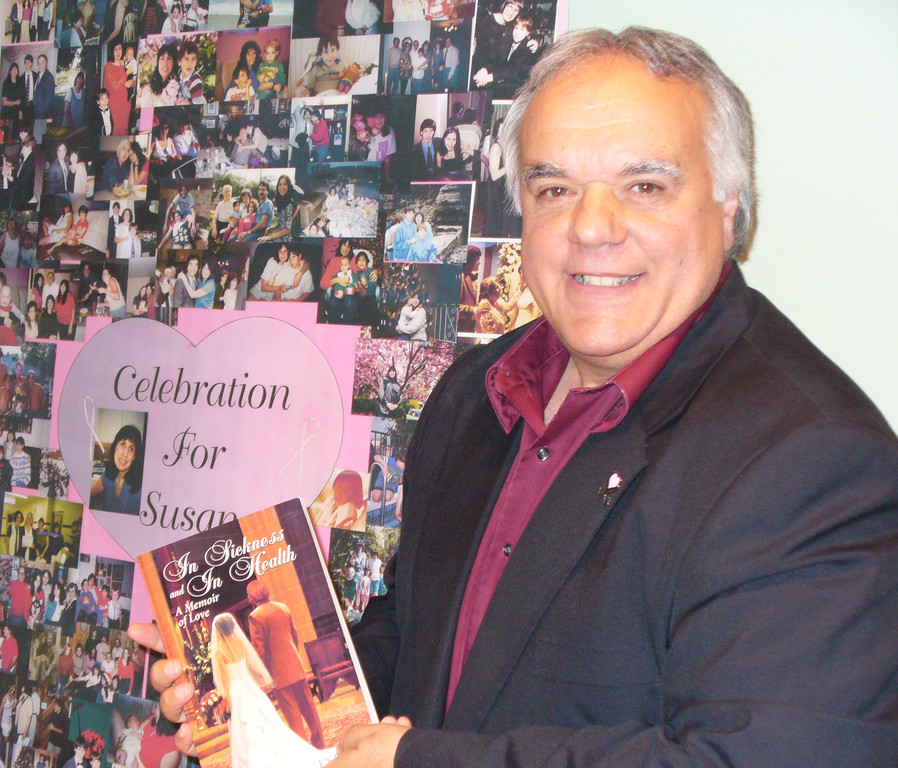 Satriano, 59, an Oceanside resident, had retired four years early from Roslyn High School, where he taught math for 25 years, in order to care for his wife. “After Mom had died, it was a very tough year,” said Matt Satriano, 28, the oldest of their two sons. “I think since my dad had been the caregiver for such a long time and he hadn’t been working, that was basically everything that had been going on in his life.”

In the months after his wife’s death, Satriano started to write in journals given to him by friends. Those journals became a book, “In Sickness and In Health: A Memoir of Love,” which Satriano published under the pen name J.S. Russo.

And that book became much more.

“In Sickness and In Health” was a chronicle of Satriano’s life with Susan and her 13-year battle with cancer. In 2006, about six months after she died, Joe decided to honor his wife’s memory by creating the Susan Satriano Memorial Scholarship Foundation. That year, using the money he received from his wife’s life insurance policy, he gave $8,000 in scholarships to four graduating Oceanside High School seniors.

There were three requirements for the scholarship: The student had to be a senior, headed to college, and he or she had to have a parent who was fighting or had died from cancer.

When the book was published, Satriano decided to give 100 percent of its proceeds to the foundation, and it has grown by leaps and bounds ever since. Since 2006 Satriano has awarded $130,000 in scholarships to 130 students — $85,000 of that this spring alone, thanks to book sales and a fundraiser he held at Oceanside High School.

“This foundation is phenomenal,” said Jamee Schleifer, a lifelong friend of Satriano’s. The two grew up together in Brooklyn. “I didn’t do the research, but I don’t think there’s any cancer foundation like his that focuses on the children of the cancer victims,” she said. “And in this day and age, with money issues, scholarships are a big deal.”

Schleifer was so taken with the idea of the foundation that both she and her husband, Michael, are members of its board of directors. She sits in on Satriano’s interviews with all of the scholarship recipients, and Michael handles the foundation’s accounting.

The scholarship is different from many others in that there is no academic requirement. Grades are not important. Children whose parents suffer from cancer often have to do things around the house that their parents used to do — care for a younger sibling, cook, clean and more, Satriano explained. This, along with the emotional stress of having a sick parent, can take a toll on their grades, which is why academic standing is not a consideration.

In fact, every student who applies for a scholarship — and meets its sobering criteria — has received one.

“He calls [the kids] the ‘silent sufferers,’” said Karen Bonnet, a friend of Susan’s who became friends with Joe after he and Susan married. Bonnet also works with the foundation, handling the marketing for the fundraisers Satriano organizes. “People tend to think of the adults first — the people going through the cancer and their spouse. And the kids kind of get lost in the shuffle.”

The scholarship program has grown exponentially since 2006. What started with four students from Oceanside has spread to 24 school districts on Long Island. Satriano has also sent checks upstate, as well as to New Jersey, Pennsylvania, Florida, Texas and Montana.

“I thought he was a very nice guy,” said Zachary Kirsimae, a 2011 graduate of Oceanside High and a recipient of a scholarship. “He was really nice and very warm-hearted.” Kirsimae’s mother is a breast cancer survivor, and he now attends Molloy College, where he is studying musical therapy. “He cares a lot about this scholarship,” Kirsimae said of Satriano, “and he puts his all into it.”

Satriano started the foundation not only to honor his wife’s memory, but simply to help children in such difficult circumstances. He saw the emotional toll Susan’s cancer had taken on his sons. He interviews his scholarship recipients for no other reason than to give them someone to talk to.

“And it’s not that the guidance counselors don’t [talk to them],” he said. “But once they find out that [they and I] are on the same level field here — having lost someone or presently losing — they open up and they talk, and it’s so good for them.”

Satriano says he hopes that one day there will be a cure for cancer and he will be able to give out the scholarship for a different reason. But until then, he is shining a light on those who are so often left in the dark. “I think my dad is helping to fill a gap there,” said Matt. “It looks like it’s starting to definitely spread across Long Island. And it would be nice if it became a national thing.”

There are no signs that Satriano is planning to slow down anytime soon. He has staged two fundraisers at Oceanside High in the past two years, and plans to hold one at Massapequa High School next year. He is even writing another book, titled “After Math,” chronicling his life after Susan’s death. Its proceeds, too, will be donated to the foundation. His ultimate wish is for the Susan Satriano Memorial Scholarship Foundation to help children all over the country.

“People want to put you on this major pedestal, which is ridiculous,” Satriano said. “I’m just doing what I think is the right thing to do. I try to tell people that I put my pants on the same way they do. There’s nothing special about me.

“I just decided to do something to help kids,” he added. “That’s all.”