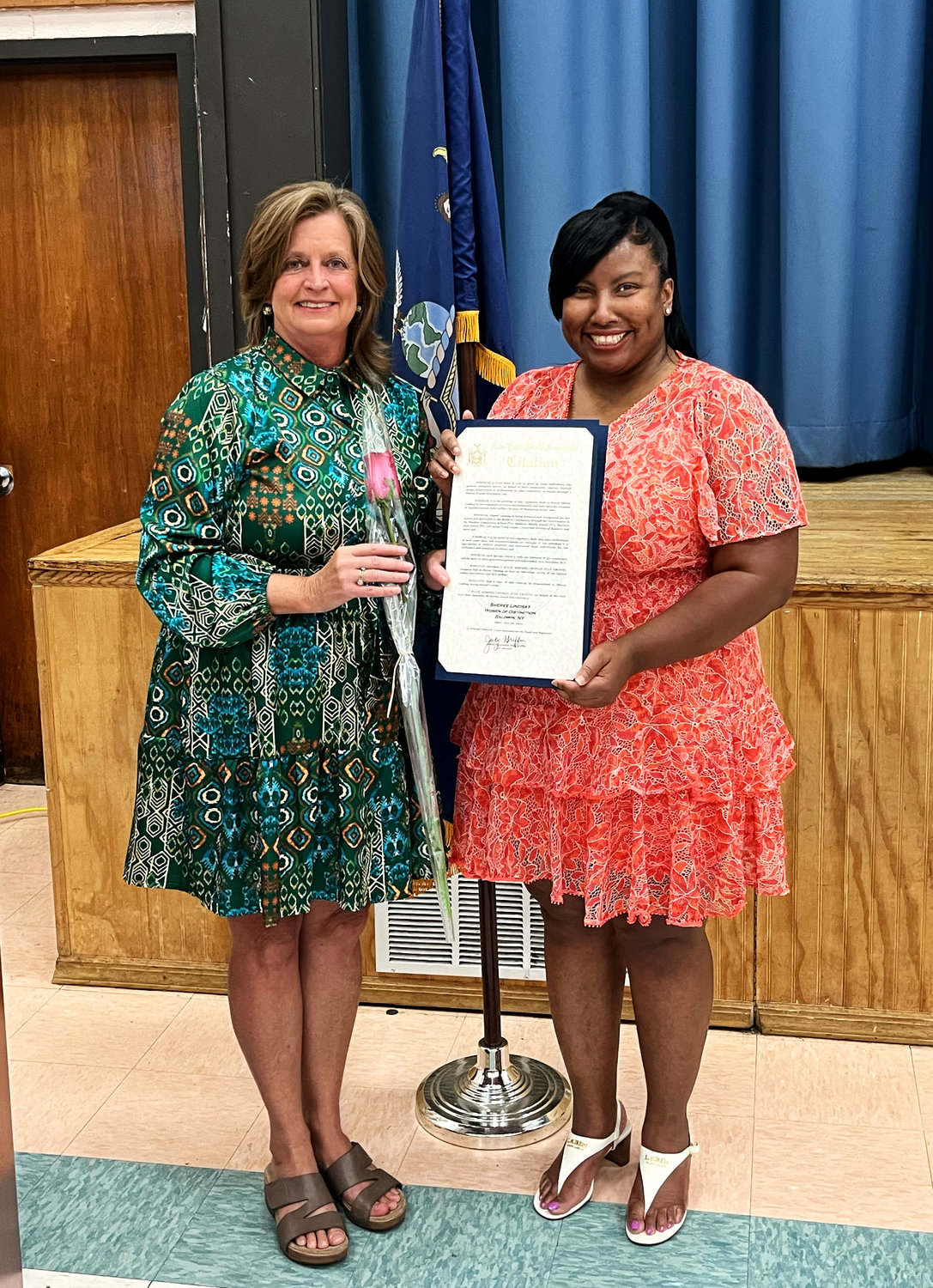 Sheree Lindsey was honored at Assemblywoman Judy Griffin’s 4th Annual Women of Distinction Ceremony for Assembly District 21 at the Rockville Centre Recreation Center July 28. Lindsey’s was given the merit for her extensive involvement in supporting Baldwin residents.

Griffin wrote of the honorees on her Facebook saying, “These impressive honorees make up the heart and soul of our communities. I am so grateful for their presence, leadership, compassion, service and civic mindedness.”

Lindsey has been a Baldwin resident since 2005 and in the fall of 2010, upon her daughter entering the Baldwin School District, she joined the Meadow School Parent Teacher Association. In her first year, she was involved in many activities and chaired several committees. After her first year she was nominated and elected to be one of the Co-Presidents at Meadow, serving from 2011-2013.

Around the same time in 2010, she also started Girl Scout Troop #2340 which is active today. In her role with Girl Scouts, not only was she a leader but she also served as Baldwin’s Chair of Association Volunteers. In this role which lasted four years, she oversaw all volunteers in Baldwin.

Moving to the Baldwin Middle School, Lindsey became Vice President of Ways & Means for two consecutive years. She was responsible for the fundraising efforts and chaired various committees. She especially enjoyed chairing the Youth Center events and sponsored a toy drive, toiletries drive, and can food drive at these events to help those in need.

Adding to her volunteer rap sheet, she is the Baldwin Booster Club President currently serving her second year. This organization supports student-athletes at Baldwin High School. One achievement was organizing a dinner for 300 students, athletes, coaches, administrators, and guests in June of 2022.

She is also President of the Concerned Parents of Baldwin a community organization that sponsors the annual Martin Luther King Jr. celebration, and poster contest, and provides scholarships to two deserving graduating seniors from Baldwin High School. Also serving as a board member of the Nassau Region PTA. During the 2021-22 school year she served as the Reflections Coordinator.

In additon she is a proud Member of Alpha Kappa Alpha Sorority Incorporated, Epsilon Pi Omega Chapter where she serves as the Chairperson of the Scholarship Committee, member of both the Nominating Committee and Sisterly Relations Committee. An active member of the Baldwin Civic Association. A member of the Ivy Academy Day Care Center Board of Directors. Serves as the chairperson of the Personnel and Grievances committee. As well as a member of Bethlehem Assembly of God Church where she serves as a member of the Compassionate Care Ministry and the Greeters Ministry. Personally, Lindsey is the proud mother of one daughter, Janae, who will be graduating from Baldwin Senior High School in June of 2023.

Getting help on taxes and exemptions