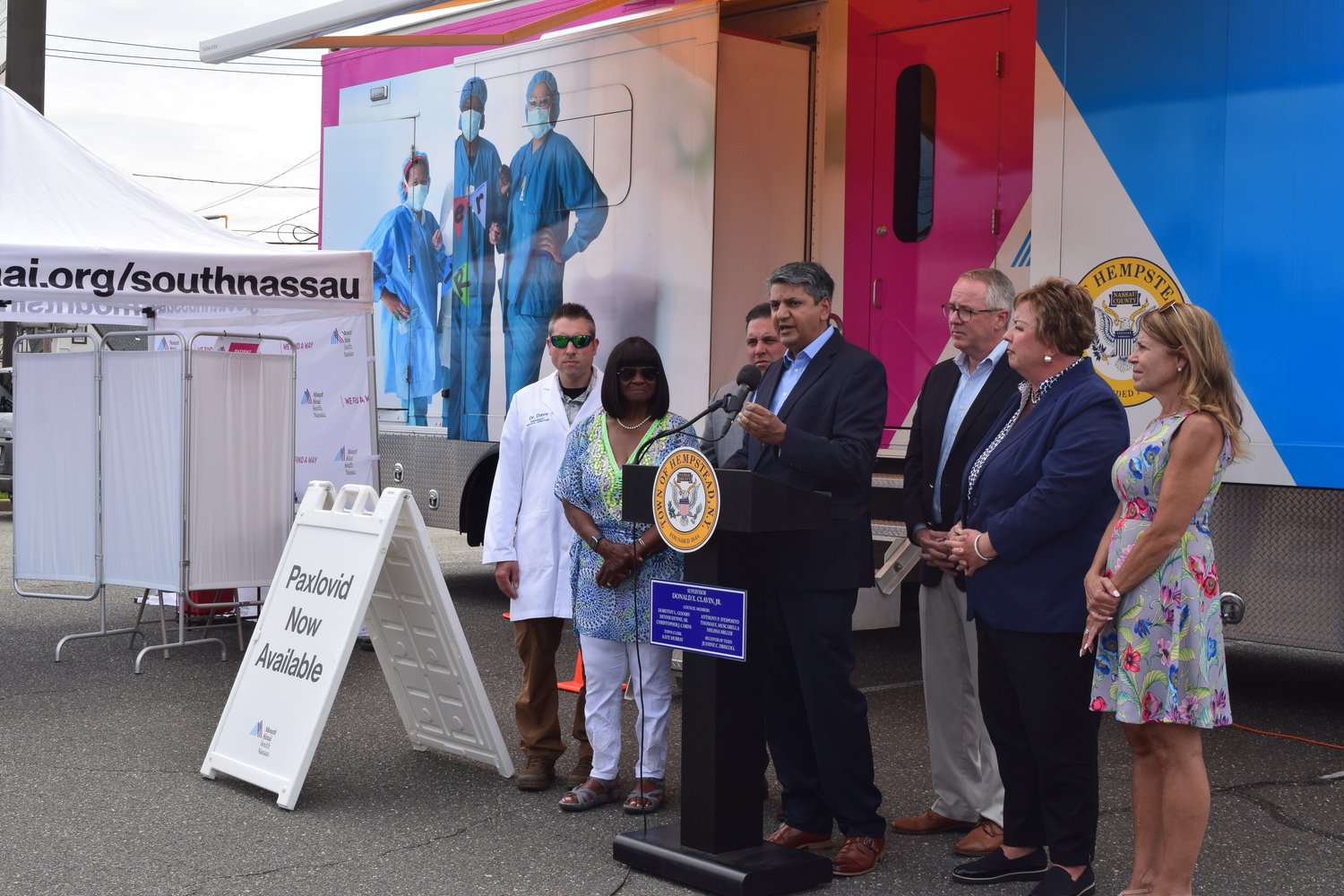 The next phase of the Town of Hempstead Vaxmobile is here as it transitions into the Paxmobile.

Named after the antiviral therapy Paxlovid used to treat coronavirus infections, the new Paxmobile was unveiled last week at the Oceanside Library by both town officials, and doctors from Mount Sinai South Nassau.

Mount Sinai’s mobile vaccination unit was born in January 2021 with nearly $700,000 from the 2020 Coronavirus Aid, Relief and Economic Security Act — more commonly known as the CARES Act. The Vaxmobile started making its rounds the same time some of the first vaccines designed to protect people inside the Town of Hempstead from the Covid-19 pandemic started to become available, making regular at businesses, organizations and neighborhoods.

More formerly known as Mount Sinai’s Covid-19 Vaccination Mobile Unit, the truck would travel regularly to community centers, public libraries, parks and other public venues on a rotating schedule to administer vaccines and test people for the virus in some of the town’s hardest-hit communities.

Now, in addition to providing vaccines and tests, the vehicle will also provide Paxlovid, an oral antiviral that doctors say is most effective when administered within five days of Covid-19 symptoms first appearing. It received initial approval from the U.S. Food and Drug Administration last December, with pharmacists now cleared to prescribe it under certain conditions as of last month.

“Now we start the next phase of the Vaxmobile’s journey,” Town Supervisor Don Clavin said. “Now it has the ability to get Paxlovid to people, either by prescription or right in the unit. We’re going to get this medication out to people in every community so we don’t go backward in time, where we’re masking and staying six feet away, and we can’t even go to a store or see our siblings.

“This is the natural progression of this vehicle.”

Paxlovid is recommended for patients who are at least teenagers, and who are at high risk for suffering from some of the most severe Covid-19 symptoms — especially pneumonia.

“Paxlovid inhibits the virus’ ability to replicate itself,” said Dr. Adhi Sharma, president of Mount Sinai South Nassau. “All those copies (are) what makes us sick. You do have to take two doses over five days, and there are some sides effects such as a metal taste in the mouth, but that’s the worst people have reported.

“For the most part, it has been very effective. With one or two exceptions, all the patients I’ve treated have had great results.”

Clavin has had his own experience with the drug, after testing positive for the coronavirus more than a month ago.

“I was very ill for a number of days, and my doctor prescribed Paxlovid to me,” Clavin said“. “It helped me get the turnaround to feel better, and that’s what’s going to happen to patients in this vehicle now.”

The Paxmobile will operate on the “test and treat” model, what officials say is the first of its kind of Long Island.

“If a patient gets tested and they’re positive, we screen them for the medication,” Sharma said. “We make sure that they’re not taking any other medication that would adversely interact with it, and then give them the right dose of the medication.”

And its treatment like Paxlovid that will be a key factor in society finally leaving the pandemic phase, and entering what is known as the endemic phase.

“Covid will unfortunately be like the flu and be something that we have to deal with on a regular basis, but we won’t see the number of deaths that we were seeing,” Sharma said. “We’re still in the pandemic right now, but it feels different. Vaccines have made hospitalizations drop, and now this is the next step.”

There have been just under 70,000 deaths related to Covid-19 in New York since the start of the pandemic, according to published reports, with nearly 4,000 reported in Nassau County. Nationwide, more than 1 million people have died from Covid-related complications, although those numbers have significantly slowed since the initial rollout of vaccines in early 2021.

Where to find the Paxmobile and when can be found online through both the Town of Hempstead and Mount Sinai. Visit HempsteadNY.gov or SouthNassau.org, as well as their social media channels on Twitter and Facebook.

Tony Iovino, Oceanside Library’s assistant director, said the library has been critical in spreading the message about the Vaxmobile. That’s what led town officials to make its Paxmobile announcement there.

“We were one of the first ones to reach out and say we want to have the truck here, and we publicized it,” Iovino said. “Whenever the truck is here, we share it on all our media channels and make sure our patrons are informed.”